Director : Neill Marshall.
Cast : Rhona Mitra, Sean Pertwee, Malcolm MacDowell, Bob Hoskins, Alexander Siddig, David O’Hara, Craig Conway, Lee-Ann Liebenberg.
Year Of Release : 2008
Length : 105 minutes
Synopsis: When Scotland is barricaded out of England, due to a plague infecting the populace, one soldier is sent in 30 years later to locate a scientists who may have discovered a cure. But there are those who don’t want her to find it.

Review : Violent, brutal, hilarious film with a sense of wicked fun and furious entertainment. This is lowbrow thrills and gore at its salacious best. Superb entertainment for the lover of blood and guts.

Holy smokes, this film is simply staggering to watch. I first came across Neil Marshall’s new film in a hallway at Heathrow Airport, back in April 08, as I wandered past a standing promotional item for the film. I tell you, my heart skipped a beat, as memories of Dog Soldiers and The Decent came flooding back. This film looked like it had a much higher budget, a lot better effects and perhaps, just perhaps, would be a success.

Then, I forgot about it, until recently it cropped up on the shelf at my local video store. Hmm, I thought. Don’t recall seeing this come out through the cinemas. Might have been missed and gone DTV. Shame, really. I put the DVD in my hand and went to the counter. Of course, being an R-Rated film, containing strong horror violence, the store assistant gave me “that” look and took my cash. I could mentally see her shaking her head, wondering what kind of sick, perverted mind would enjoy seeing trash like this. I pitied her. 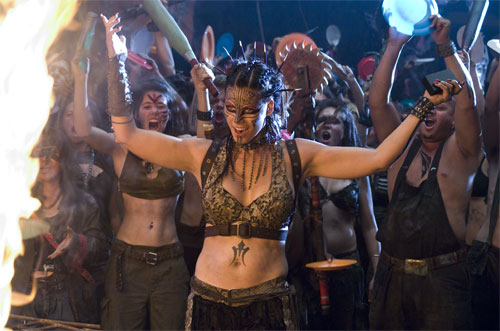 Anyway, I watched this film, knowing virtually nothing about it. All I could glean was what was on the front cover, and that appeared to be a bunch of apocalyptic Mad Max styled visions.

Indeed, Doomsday is exactly that. Mad Max re-envisioned for the modern cinema style. Plus, the film copies from a bunch of other films in the process. A vague reference to King Arthur, a 28 Days Later throwback, and almost any Michael Bay film you care to choose from: all seem to be stolen from in order to produce one of the fastest, most frenetic horror/action flicks of the year. Highly derivative, lacking in any common sense and logic, and beyond redemption as a film, this is as far from a well thought out idea as you can get.

That said, I thoroughly enjoyed myself, if only for the vicarious thrill of seeing Rhona Mitra doing her best Linda Hamilton impersonation as resident tough-girl in a singlet taking on the bad guys, complete with knife, machine gun and sweaty, muscular coolness. Yes, it’s one of those films.

Overlooking the fact that the storyline borders on incomprehensible, and the logic behind what’s going on is staggeringly obtuse, the film rattles along like an out of control freight train, filled with fire and brimstone and heading straight for your brain. Gore, violence, dismemberment and cannibalism are all topics touched on by this sensitive screenplay, which utilizes such varied devices as burning people on a stake, eating their flesh and rampaging through the Thunderdome, in complete disregard for your emotional state. 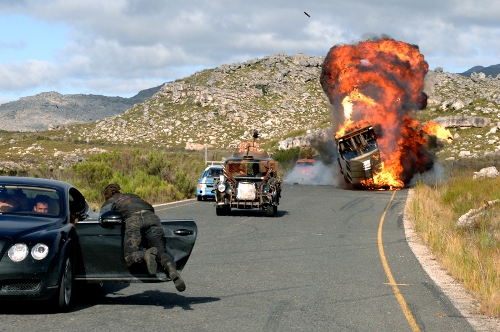 In the future, a plague decimated the population of Scotland, leaving the English no choice but to build a huge wall between the two countries to ensure the safety of those in the south. Expecting the population to die out, thirty or so years later, the British government is surprised when satellite imagery produces images of people on the streets of Glasgow.

With the plague re-emerging inside the centre of London, the government decide to send a crack team to uncover the reason behind Scotland’s re-population, and to find the cure, if any exists.

Rhona Mitra, star of such film fare as Beowulf (the Christopher Lambert version) and one-time model, plays tough-girl Eden Sinclair, sent to lead the group on the mission into Glasgow. Along with some soldiers, and a couple of scientists (one played by Sean Pertwee, utterly wasted in what’s essentially a glorified cameo) they traipse into the city, and are almost immediately set upon by a group of snarling, prowling punk-looking reprobates intent on serving them up to their leader, Sol. Sol, who looks like he’s hyped up on some kind of drug, and obscenely violent and unpredictable.

Seems Sol, and his father, the inimitable Kane, who is the scientist the group have gone to find about the cure, have had a falling out: this is made clear when Sinclair and a small band of soldiers and citizenry escape Sol and his clutches and make their way to Kane’s fortress. 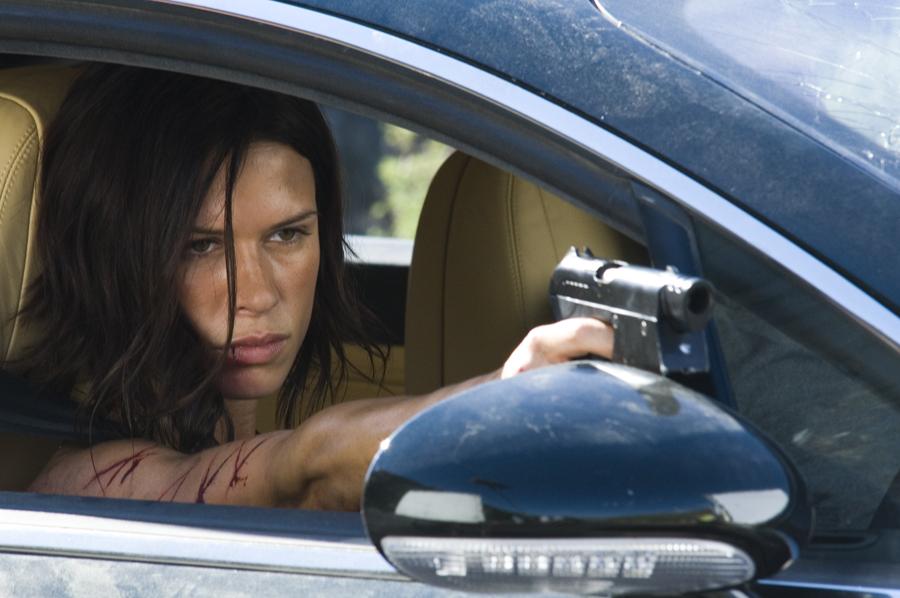 Kane, played by a “I’ll just phone this performance in” Malcolm MacDowell, has set himself up like King Arthur, complete with Knights and the obligatory Gladiator-style death pit, where combatants fight to the death. Sinclair, again captured and sent into fight the local gladiator, regards this all with a great deal of disdain: Mitra’s performance seems based on scowling a lot, and glaring a whole heap more. Doomsday is a rabble of a film, a mishmash of ideas and performances that veer wildly into parody, the structure of the film lurches from one ill-conceived setpiece and into another. Interestingly, you can see where all the money was spent, and it was spent well. The visual effects are awesome, and the production values are certainly top class. Yet, for all it’s inventiveness (or, should I say, blatant plagiarism from other apocalyptic films) Doomsday relies too heavily on look, and less on script. 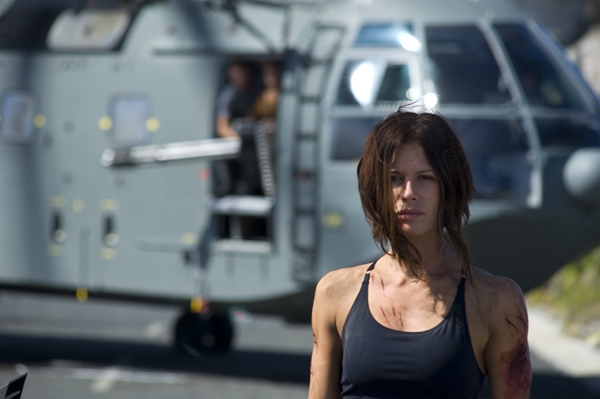 Still, I found the film’s flagrant disdain for conformity somewhat refreshing, the exciting finale (with Sinclair racing the punkish outlaws along a “dark desert highway” (hey, homage to The Eagles there!) with gunfire, explosions and impossibly outlandish stunts filling the screen with viscera and blood. It’s all pretty tongue in cheek, to be honest, and I guess you could look at this film and think: urgh, what a stupid example of the genre. Or, you could check your brain out at the door, sit back and watch the carnage ensue with an abandon that must have worried the censors at the time. Personally, I had a great time with this film, despite it’s faults. It’s simply a great wallowing in the cinematic artform, and I think while Marshall may have done himself a disservice with this film, critically speaking, I hope his next effort is less reliant on the pastiche of ideas from other films and more original. 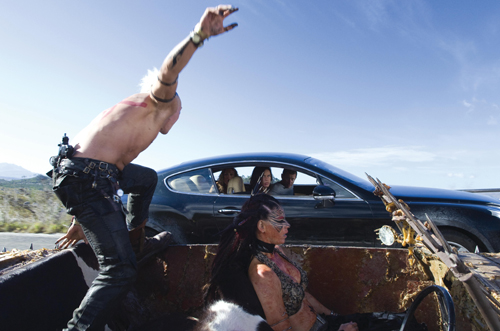 Still, for the gunfire, the obscenely magnificent realism and the magnificent car chase that rounds out the film, I rate this high on the stupid-o-meter, and low on the quality-o-meter. Depends on what you want in a film, whether you get anything from this one. Me, I loved it.