Director :   Robert Luketic
Year Of Release :  2008
Principal Cast :  Kevin Spacey, Jim Sturgess, Laurence Fishburne, Kate Bosworth, Aaron Yoo, Liza Lapira, Jacob Pitts, Jack McGee, Josh Gad, Sam Golzari.
Approx Running Time :   123 Minutes
Synopsis:   A group of college students set about trying to take down a casino by counting cards.
What we think :  Lite-weight dramatic kinda-comedy does what it says on the box. 21 is never going to be on the tip of your tongue when thinking about great casino movies, but it’s one you’ll enjoy while you’re watching it. Sturgess and Bosworth are excellent, Spacey is terrific, and Fishburne’s casino manager role is great. In all, a solid little thriller.

Stylish, brash film about a group of young braniacs off to Las Vegas to count cards and make a truckload of cash at various casinos on the strip, 21 is a poor man’s Oceans 11 that still manages to raise a smile.

While Beating the Casino films always strike a chord with audiences, mainly due to the fact that, for some reason, casinos are seen as some kind of scourge of society and need to be taught a lesson in not ripping people off. Or perhaps it’s the mythology of beating the casino’s at their own game.

Either way you look at it, this is the kind of film that has always done well with audiences, ever since film was invented. We all love a good get-rich-quick story, and this film is yet another of them.

21 relies less on big name stars filling the ranks and more on the story, the emotional journey undertaken by one young lad who is invited by his MIT professor to join his elite group of card-counting casino strategists in a plan to win large sums of money. Ben, the young lad, agrees only to win enough money to pay for Harvard Medical School, which will cost the inordinate sum of $300,000 to go to. Demonstrating an aptitude for card counting and an ability to perform under pressure, Ben, his professor Mickey, and four other students travel to Vegas on weekends to take money back from the casinos. Counting cards, while not illegal, is frowned upon by the casino industry, and their frowning often involves beatings and torture. With the threat of being caught always on their shoulders, the group begins to win more and more money, until it raises the eyebrows of one security operative, Lawrence Fishburne, who proceeds to unravel the groups plan. 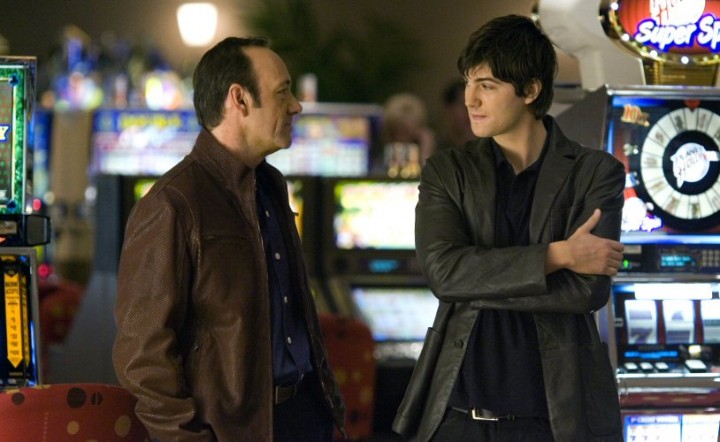 Ben, developing a bit of an arrogance about himself once he realizes how valuable his talent is, proceeds to start trying to do things his own way, which creates friction between him and Mickey. Ben’s relationship with fellow gambling student Jill, played by current Lois Lane, Kate Bosworth, also begins to fall by the wayside as his life tumbles out of control.

21, while being a fairly slick affair directed by Aussie Robert Luketic (Valentine, Legally Blonde), manages to fall over at critical moments of drama: Jim Sturgess isn’t strong enough to play the awkward-then-arrogant Ben with enough conviction to enhance the plot, and his chemistry with a truly awful Kate Bosworth is about as heated as a southerly breeze from the Antarctic. Bosworth delivers her lines, which, admittedly, aren’t that great, with the charisma of scooped vomit, utterly lacking a screen presence and the ability to engage the viewer. Poor Sturgess must cope with this as best he can, but he lacks the talent to get his scenes with her over the line.

Major star (and the film’s producer) Kevin Spacey is excellent, his kinda-cool professor act moving the story along quite well, with just enough hint of mystery and malevolence to generate some tension in the plot.

Acting aside, and let’s face it, the young cast of unknowns are probably never going to put this high on their list of thespian achievements should they get better roles, 21 bubbles along on the merits of it’s unique genre feel: gambling is cool, and these guys know it. The script is lacking in true depth, some characters are ill-defined and serve merely as ciphers, yet Luketic manages to inject the film with a sense of style that lifts the whole project above mere mediocrity and into something that’s actually entertaining.

Now, many people will be aware that any good heist film, and that’s essentially what this is, should have a good twist at the end. You know, the moment where the good guy looks out of it, but he ends up getting what he wants in the end. Well, with 21, it’s not quite as classy a twist as you might hope, but it’s still pretty funny. Be aware though, that the film isn’t in the same class of mind bending twists as, say, The Sixth Sense, or even the more relaxed Oceans 11 films, 21 still manages to do itself proud with a good story. It’s just a pity the script and acting aren’t up to snuff.

Still, for an entertainingly slick story, filmed well by our good Aussie boy Robert Luketic, you could do a lot worse than this piece of fluff. Hardly going to set the world on fire, but it’s worth a look.