Director : Clyde Geronomi, Les Clark, Eric Larson, Wolfgang Reitherman
Cast :Voices of: Mary Costa, Eleanor Audley, Verna Felton, Barbara Luddy, Taylor Holmes.
Year Of Release : 1959
Length : 75 Minutes
Synopsis: A curse is placed upon a newborn princess, that on her 18th birthday she will prick her finger on a spinning wheel, and fall asleep forever. Only the kiss of her true love, the prince, will wake her. And so begins the story of Sleeping Beauty, Princess Aurora, in one of Disney’s most awe-inspiring films.

Review : Hands down one of the most beautiful animated films of all time, Sleeping Beauty has style and lavish animation to burn, and the story to boot. Dazzling artwork and characterisations, plus an epic widescreen landscape to play with, ensure this remains one of the many pinnacles of Walt Disney’s animated empire. On DVD, it looks amazing.

As a fan of the House Of Mouse over the years, I have to say the Disney platinum DVD’s they release every so often are a bit of a hit and miss affair at times. While Disney’s quality control on their films cannot be questioned, and their attention to detail is superb, the extra features they put on their two disc editions of their classic films leaves a lot to be desired.

Recently I had the pleasure of sitting down with the 50th Anniversary Edition DVD of Sleeping Beauty, one of my favourite traditionally animated films from childhood, and a film I haven’t seen in at least a decade or so. Sleeping Beauty was always renowned for its stunning artwork and animation, and seeing this film again after so long, I have to say that it is indeed one of the finest examples of the art form you’ll ever see. Lavish wide-screen imagery, captured from the original 70mm film source, looks simply amazing on DVD, vivid colours literally leap off the screen with a detail you’ll be stunned at. 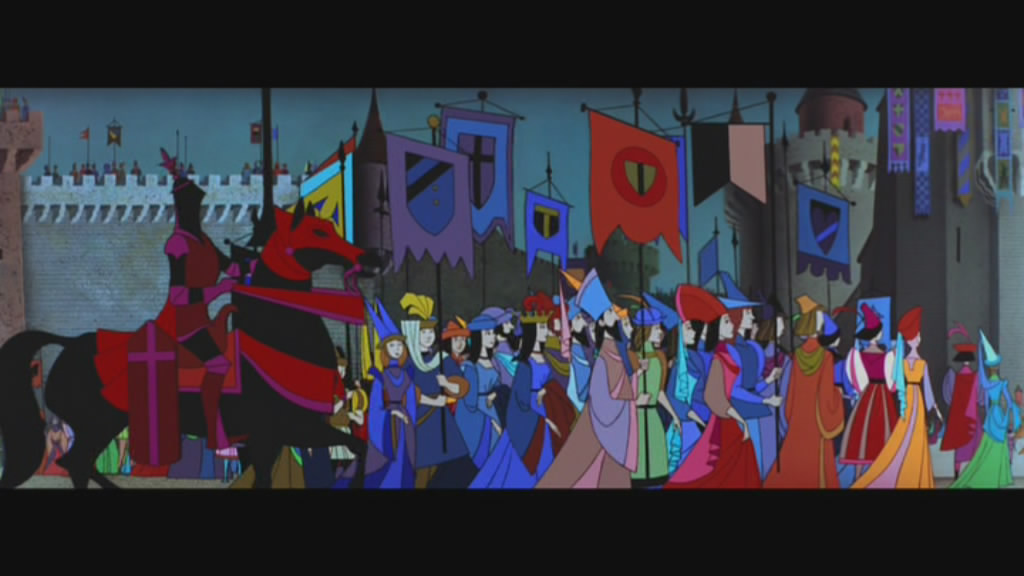 Sleeping Beauty is, of course, one of the worlds great fairy tales, originally told by Frenchman Charles Perrault in the late 1600’s as part of the Mother Goose collection. Most people are aware of it’s existence in one form or another, either in the original works, the ballet with music composed by Tchaikovsky, or the Disney film version. Disney’s filmed version remains to this day the definitive filmic presentation of the story, which is perhaps why this DVD release is to be applauded for it’s intricacy. 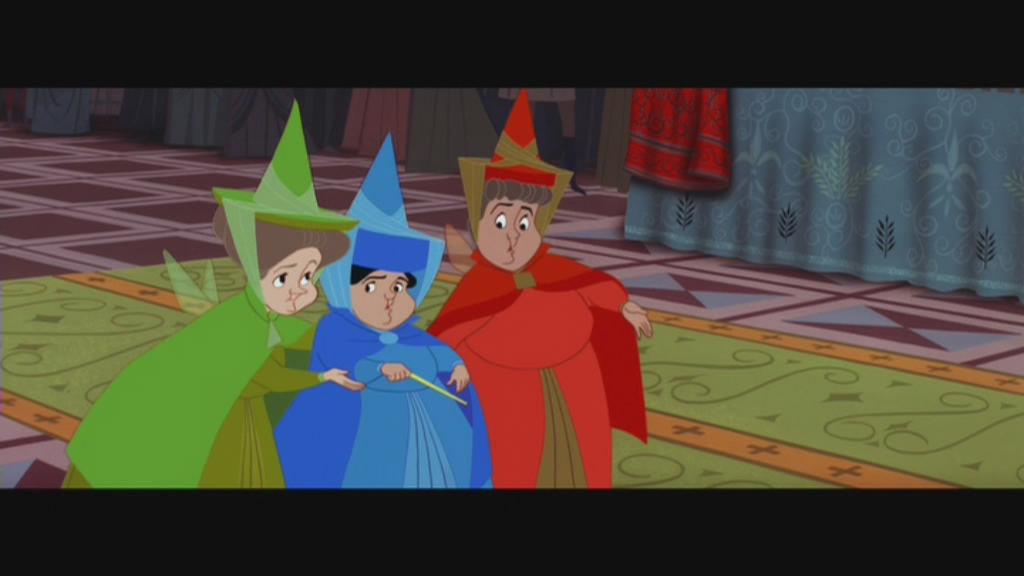 In the heyday of the 50’s, Disney was undergoing a radical transformation as an entertainment empire, with the construction of Disneyland, and in particular, the giant castle that would come to be known as Sleeping Beauty’s Castle, taking up much of Walt’s time. According to the boffins on the DVD, Walt left a fair portion of control of the film to his chief production designer, Edvind Earle, who masterminded the entire look of the film and the characters, almost to a pedantic degree. The added use of the larger film format meant that the detail on screen would be substantially increased, another factor in the film’s escalating costs. The artists had to draw larger, more detailed images for use as backgrounds, and the linework of the finished cells used in animating the characters had to be insanely clear and clean. 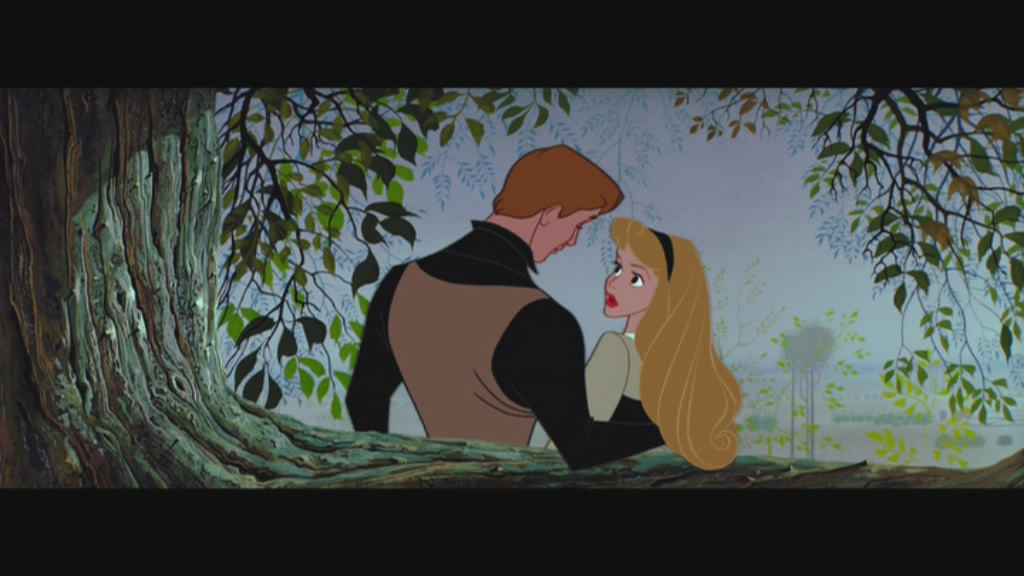 The film commenced production in 1951, and took most of the decade to complete, finally being released to the public in January of 1959. Upon it’s release, it didn’t perform very well. In fact, the films costs plus the construction of Disneyland nearly sent the company into bankruptcy. The company eventually recovered, but Sleeping Beauty was written off as a loss. 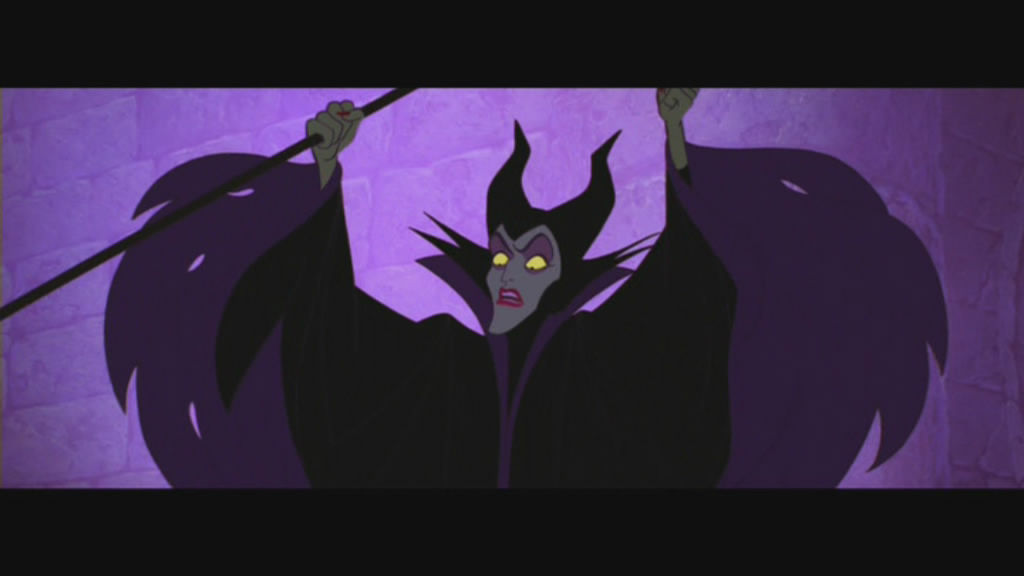 There are many theories as to why the film performed poorly during it’s original run: the novelty of the 70mm film format and the relatively new stereophonic sound obviously didn’t draw people in as was hoped. The film looked different from previous Disney films of the time, something audiences perhaps weren’t ready to accept (after all, when you went to see a cartoon movie, you expect it to look a certain way! Don’t you?) which didn’t help. Nowadays, modern audiences are ready to accept just about anything in terms of style, as long as it’s consistent. Look at Disney’s Hercules, for example, by comparison with, say Tarzan. Utterly different animation styles, yet still accepted as a valid version of the art-form. 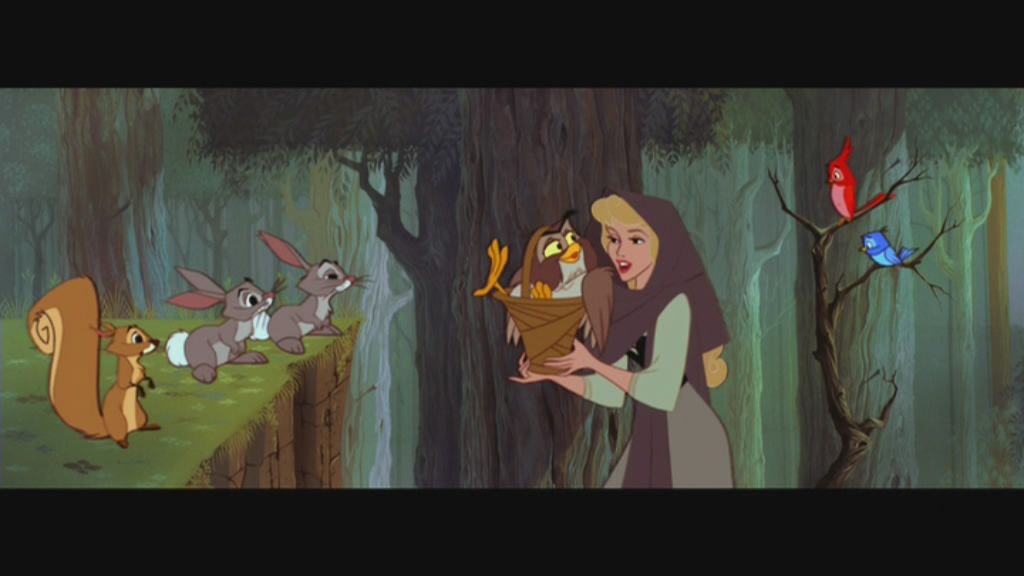 Over the intervening years, though, Sleeping Beauty’s true quality was eventually realised, and is now considered by many film critics to be one of the finest, of not THE finest, example of the animated art-form ever made. The finale, with Malifecent battling the Prince in her dragon form, is hailed by animation fans as perhaps the single greatest sequence committed to film. 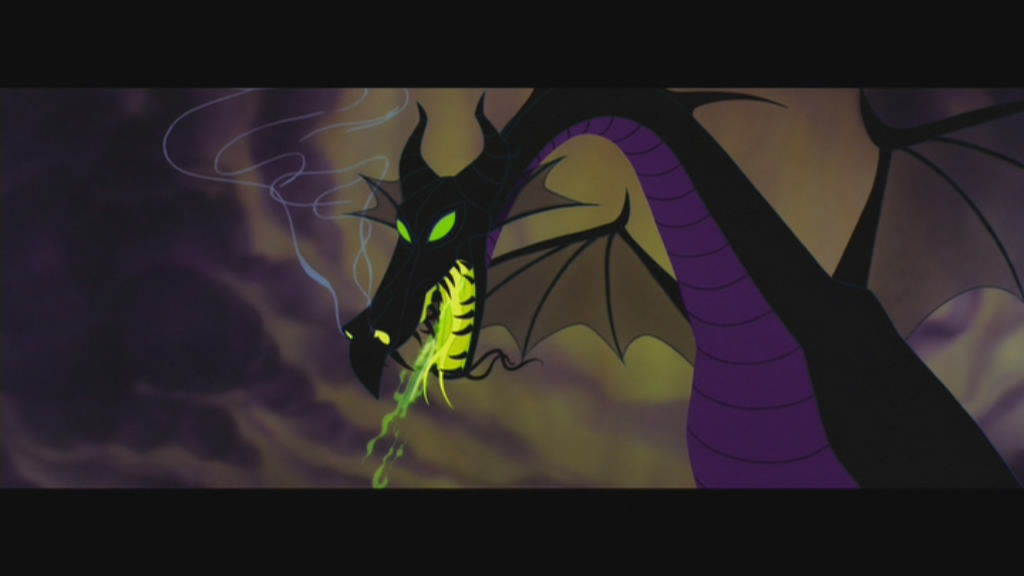 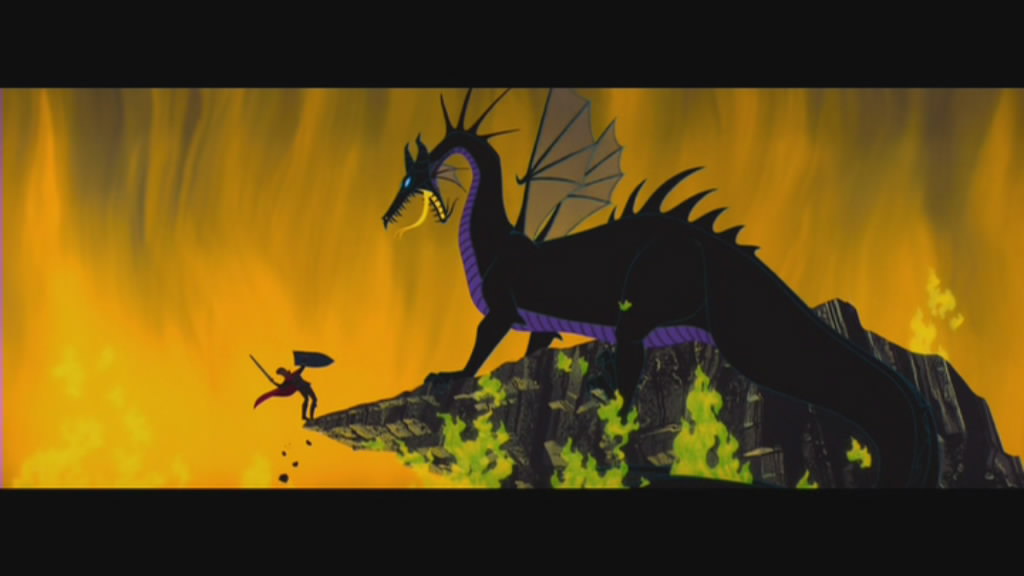 Princess Aurora, born to a King and Queen, is cursed upon her introduction to the kingdom by Malifecent, spurned by her lack of invitation to the party. Malifecent tells the gathered assembly that Aurora will prick her finger on a spinning wheel thimble and die, by nightfall of the day of her 16th birthday. After Maleificent leaves, cackling to herself, one of the Three Good Fairy’s present changes the curse so that Aurora will not die, but instead sleep until the kiss of her true love wakes her. 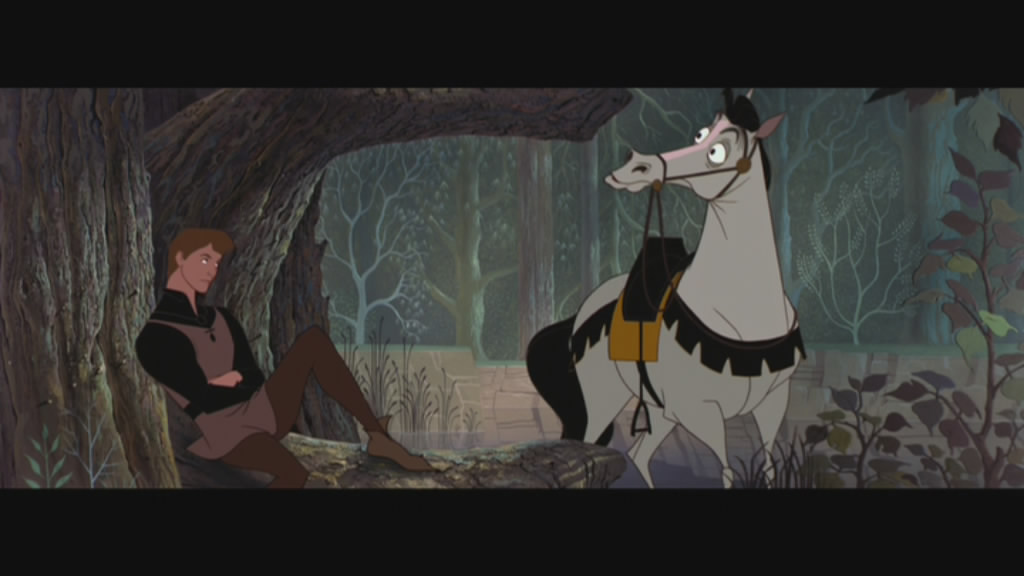 In order to protect Aurora from the evil of Malifecent, the three fairy’s take the baby into the forest to keep her secret until the curse is broken. They rename her Briar Rose, and she is kept sheltered from strangers and discovery right up until the day of destiny: Prince Philip, who met the young princess as a baby on the day she was cursed, is riding through the forest and hears the girl singing.

Like a fool, he finds her, and they fall in love at first sight.

Of course, things don’t go smoothly for all involved, Malifecent captures the prince, Aurora pricks her finger, and things go pear-shaped all over the place. 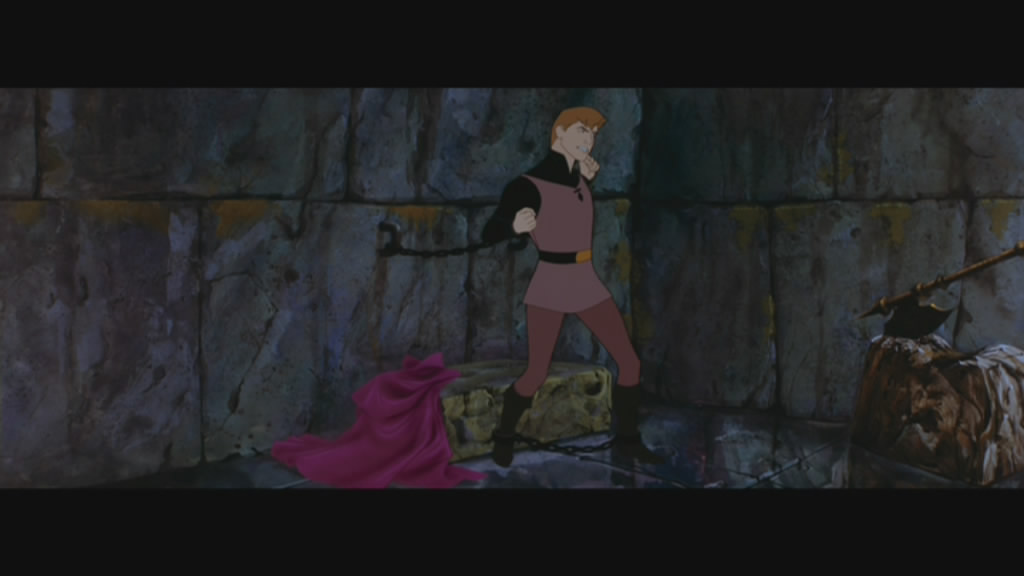 I enjoyed the film, the story was relatively simplistic, and the characters quite enjoyable to watch. The film, while being perhaps less intellectually stimulating than other films, is a true joy to watch. 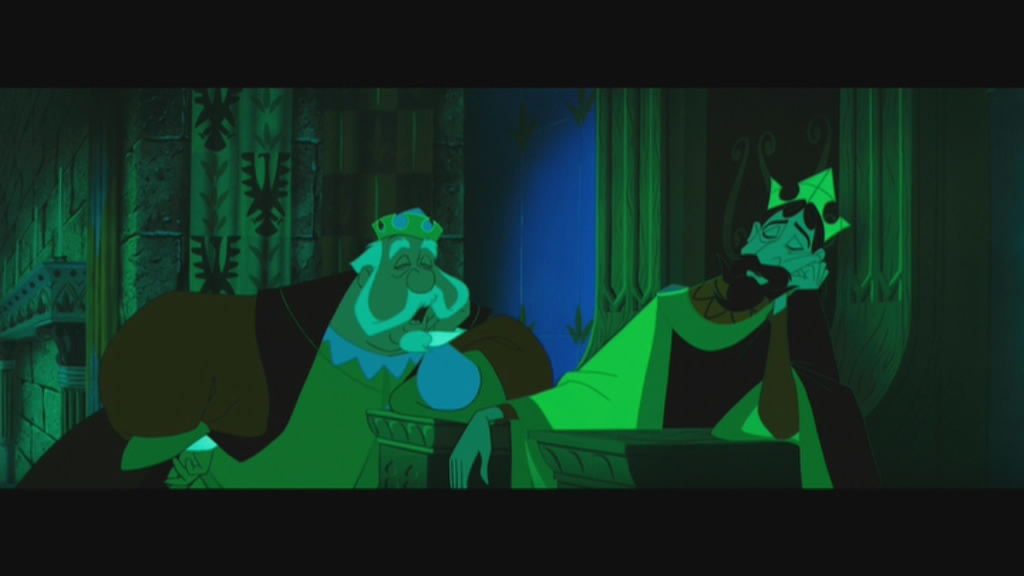 Unfortunately, the 50th Anniversary DVD cannot be said to be of the same quality. The 2 disc set contains the film, with a wonderfully lavish Dolby 5.1 mix, and a stunning anamorphic image in the original 2.55:1 aspect ratio. Yet, alongside this is a ridiculously insipid cover version of the films theme song Once Upon A Dream, by Hannah Montana star Emily Osment, which is about as appealing as an ill-placed nutcracker: the only people who will appreciate this are the teenage girls who squeal and gurgle over Hannah Montana.

The second disc features an interesting documentary on the production of the film, from conception to final product. It uses vintage film and interviews with current animation experts from Disney, as well as historians and other people of interest to the production. The Making Of Sleeping Beauty is a wonderful example of a well made, if slightly puffy, behind the scenes look at the creation of one of cinema’s great animated films. Accompanying this, tucked away on another screen, is an hours worth of the Disneyland show, hosted by Walt himself, as they provide a Disney-fied history of Tchaikovsky, as well as the worlds first ever broadcast in “widescreen”, showing an excerpt from the film in it’s original aspect ratio on screen. These two featurettes are excellent, and worthy of inclusion, if not for any quality but simply for the vintage footage. 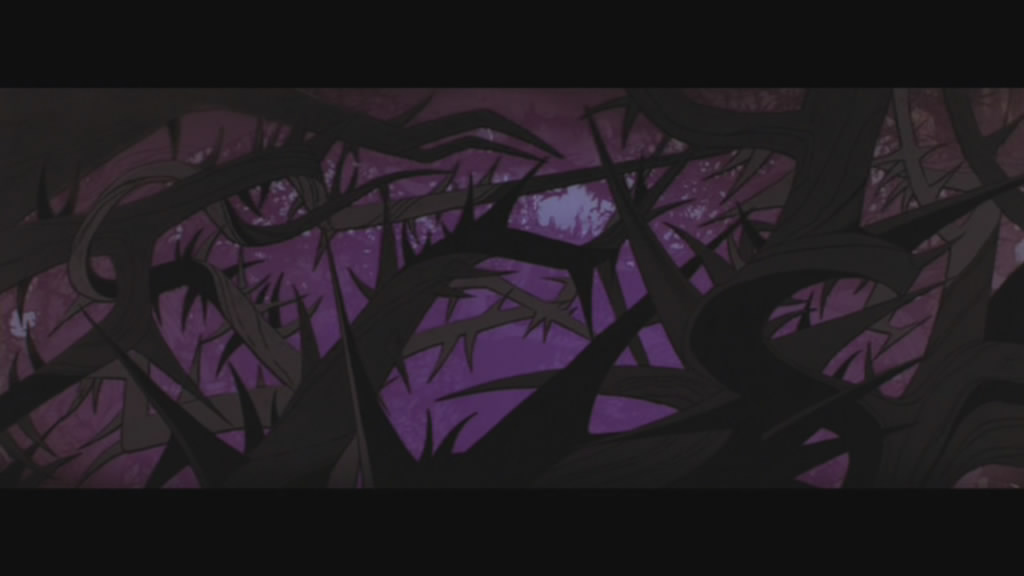 However, the rest of the material on the DVD is either insipid games and “fun” (seriously, who actually plays these games and puzzles and things…?) or boring, liteweight non-related docu-material like the awesome looking but ultimately empty Grand Canyon piece.

The problem with the Disney Platinum/Anniversary/Whatever branding is that it’s quality is slowly being eroded by the presence of rubbish on DVD that nobody really wants. Games and half-assed pop songs by teeny-boppers with little to no credibility? Sorry Mouse House, that’s not what I want on my collectors DVD of one of the greatest animated films of all time. 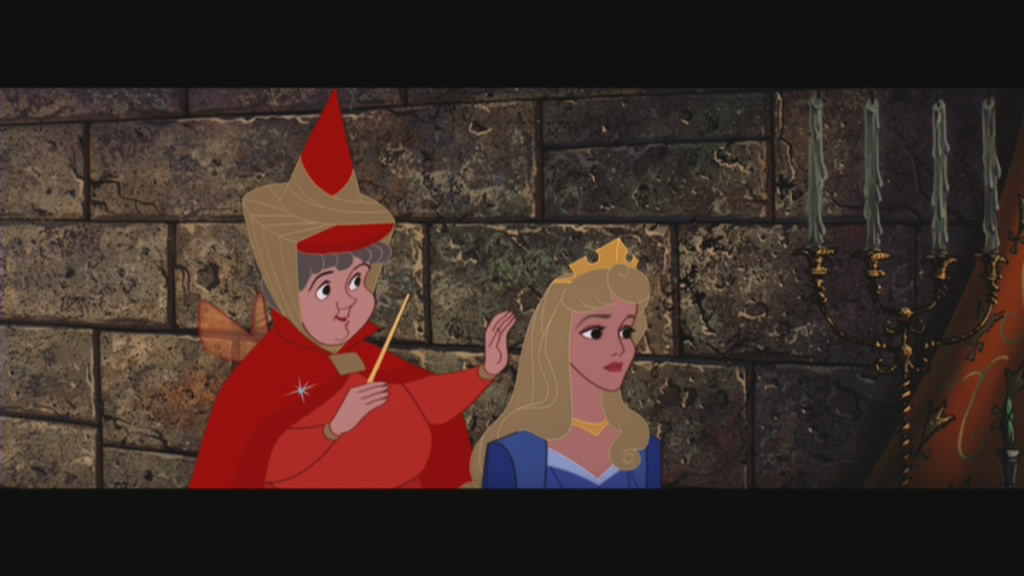 I want features that actually have something to do with the film: not some, all! It’s important art on this DVD, and you want to ruin it with gametime and spacewasting covers of songs that nobody ever heard? 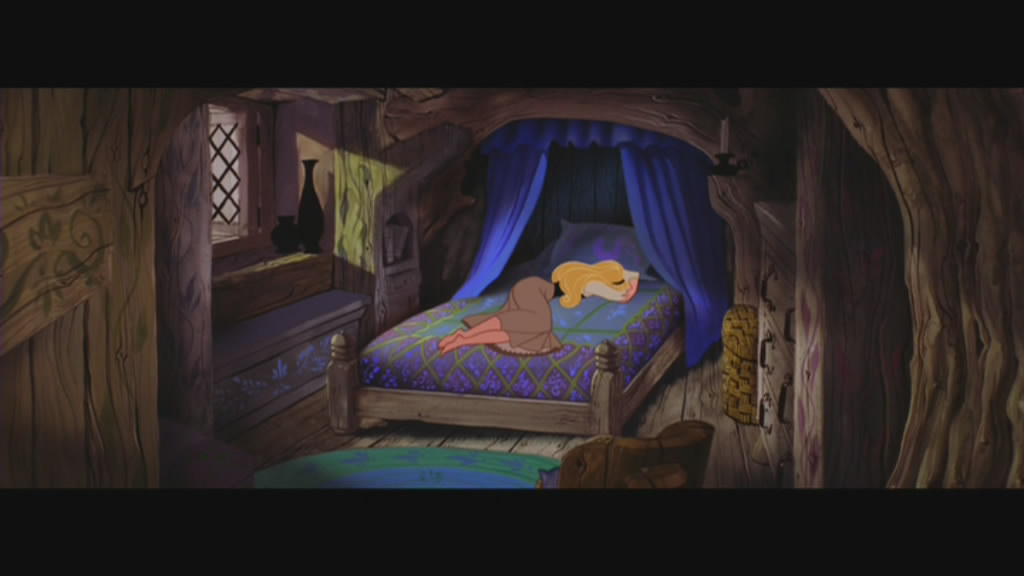 It disappoints me greatly that the best Disney could come up with on their show-piece DVDs of late is meaningless tripe better suited to Sunday afternoon television. The company’s history and diversity would seem to have been laid by the wayside in this instance, and those in charge should take a long, hard look at themselves, and figure out what people really want on their special two disc edition.