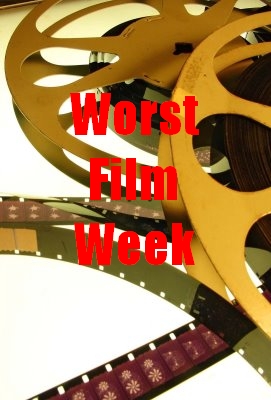 This week, fernbyfilms.com highlights the worst of the worst. Each of our contributors (and the occasional special guest) tells us what they think their most hated, worst, awful film ever made, is. Not the least successful, but the worst creatively. Some bombs have actually been decent films (Cutthroat Island, we’re looking at you!) but we want the worst pieces of tripe ever! Often, we consider bad films lacking in direction, style, cohesion, story, quality; whichever film you consider to be the worst film you’ve ever seen, we’d like to know!

We present our picks for some of the stupidest examples of cinematic cruddery ever produced!!! Two posts daily, all week!!! What could be better than that?!!?!

Let us know what your pick would be… simply comment at the bottom of the post! Maybe you have one we haven’t thought of!

Plus, we bring you various Worst items from cinema throughout the week, including a special post on the worst film posters of all time… well, some of them. Now there’s something to make you laugh, I guarantee it!

Next week, we present our massive 4-part series entitled Widescreen – Can I get A Cream To Make It Go Away?. We’re holding over a heap of reviews while we’re doing all these special events, which we’ll play catch-up with later on. Don’t fret, all your regular reveiws will return in a couple of weeks.