Review : Brutal, terrifying, scare-fest, leaves nothing behind in trying to ensure you spend the night under the doona hoping nothing comes out at you from the darkness. Utterly brilliant genre film is nothing short of breathtaking. Much better than The Cave.

You know, this script must have seemed like a godsend to just about any horror filmmaker working today. A bunch of young, attractive women (one of which happens to be a lesbian… not that it’s a key plot point, but it certainly needs mentioning) go spelunking in an unknown cave system, get trapped, and are set upon by vicious underground monsters, with no way out and no food and no light and no blah blah blah….. lost you at the young attractive women bit, didn’t I? Sure, this film has all the hallmarks of a bad B-movie plot that, had it been made during the 70’s, would have involved most of the women taking off their clothes in one of these caves (preferably, all at the same time) and getting down and dirty. Strangely, in the new millennium, that does not occur. What does occur, however, is a frightening journey into madness and terror that, for once, truly does give viewers the heebie-jeebies. 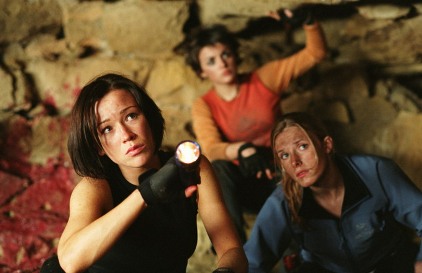 People in Australia will not recognize the name of director Neil Marshall, an Englishman best known for his only other feature film release so far, Dog Soldiers. That film was a low budget werewolf film, that as since gone on to attain a cult following, even if it did not make money at the theater. Dog Soldiers is certainly a well made film, and even if the subject matter is not up your alley, its worth a look for bravura film-making.

Marshall puts the skills he honed on Dog Soldiers to good use here in The Descent. Unlike the other spelunking film released at a similar time (funnily enough, entitled The Cave) this film is darker, less reliant on widescreen action and effects, and a whole lot grittier than the Americanized bastard that it competed with. For Australian audiences, it includes a bit of local flavor in that among its cast is Natalie Mendoza, one half of former pop band Jackson Mendoza (you know, they sang that song entitled “Venus or Mars”) as well as a bunch of other “unknowns” in the lead roles. 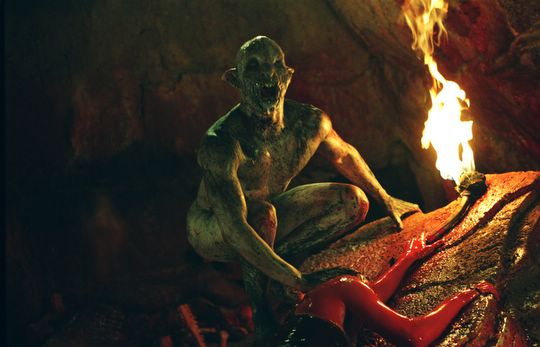 The film starts off setting the tone with a rather brutal car crash, killing of the husband and daughter of one of the women, Sarah, played by Shauna Macdonald. Sarah and her friends are extreme sports fans, and they appear to have a long and complicated history, which is hinted at but (thankfully) never fully explained. I say thankfully, as Marshall allows the viewer to draw their own conclusions about the relationships between the six women, rather than explain it all for us. A year after the crash, the girls gather in the Appalachian Mountains to go spelunking, organized by Juno (Mendoza). Of course, once the girls get down into the cave system, things go horribly wrong. Their only way out appears to have been blocked by a dramatic and intensely claustrophobic cave-in (best line of the film: “F**k the bag, lets go!”) and for some reason, Sarah keeps hearing the sound of a child laughing throughout the early part of the movie. Is it the sound of the ghost of her dead daughter? 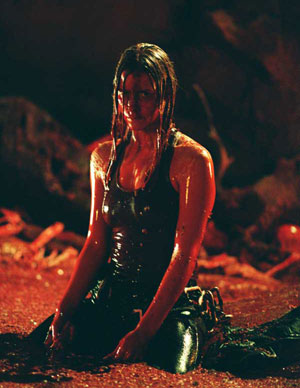 Of course, the main reason the audience goes to see a film like this is for the monsters. And boy, are they creepy. And their big reveal is genuinely “jump out of your couch and hit the ceiling like that scaredy cat in the Bugs Bunny cartoons” frightening. Skin-crawlingly scary. And they are vicious. And the girls are put through the ringer in ways more frightening than any “trapped in a dark place” film I have seen before.

While a lot of filmmakers try and build up the suspense and trick you as to who is going to live and who will die, Marshall is one filmmaker who genuinely succeeds in this effort. You do not know who will live and die by films end. The adventure goes completely to pieces as soon as the monsters come out, and from there its a mass of darkness, monstrous screams (which, I might add, are also genuinely scary) and women trying desperately to get to the surface and possible freedom. 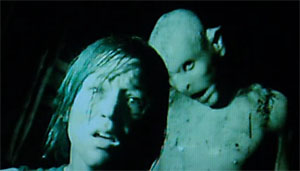 Whatever you do, do NOT turn around…

Is it a good film? Well, if you don’t like blood, gore, violence and people swearing, then no, this film is utterly terrible. But if you are a person who enjoys getting truly frightened in a darkened lounge room late at night, then this film will be right up your alley. Awesome editing, wonderful sound design and a brilliant idea for a plot make this a truly frightening adventure underground. Like Jaws made you stay out of the water, this film will make you afraid to go spelunking.