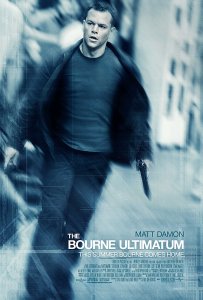 Fernby Films presents the original Bourne Ultimatum review redux version for your reading pleasure. This review was originally part of a multi-part post from 2007 that did not originally get much exposure. Here, on it’s own for the first time, is that review, now expanded and revised.

Starting where The Bourne Supremacy left off (and I mean, immediately where the second film left off!), Bourne continues his hunt for those responsible for turning him into an assassin. The film begins immediately where Supremacy left us, with Bourne going to see the daughter of one of his targets, before being pursued by Russian police once more. Meanwhile, the CIA are chasing him via their web of computers and intelligence agents across Europe.

Can I just say that if you did not enjoy the way the second film was shot and made, then you will feel equally maligned towards this film as well. Director Paul Greengrass favors the unsteady, hand-held camerawork of most of his films (including the brilliant Bloody Sunday, and the underrated but extremely moving United 93) and creates a real sense of tension through filling the frame with blurry, nerve jarring action, or at times only allowing one part of an actors face to be seen to heighten the “documentary” feel of the film. Greengrass is asking us as an audience to eavesdrop on Bourne’s journey, to be a part of it while not being directly involved.

Matt Damon is rock-steady in his portrayal of Bourne, delivering another professional (if somewhat aloof) performance as the amnesiac spy. The cast from previous film who are still alive rejoin the action as well, with Julia Stiles receiving a beefier part and Joan Allen again providing class and guile to her role. Newcomer David Strathairn (in a role similar to the original Bourne Identity’s Chris Cooper) plays vicious CIA chief Noah Vosen, who uses all his available personnel to chase anybody connected with Bourne (including his own people) and kill them. As with all CIA/FBI people in charge of capturing Bourne, he gets increasingly frustrated at his inability to do so. The incomparable Albert Finney (Daddy Warbucks from Annie, or Ed Masry in Erin Brockovich) appears as the man ultimately behind Bourne’s condition, and their final confrontation is terrific. What’s great about the Bourne/Dr Hirsch finale is that it’s not an action scene (as you would normally expect in an action film) but a dialogue scene. This makes the journey that began in the waters of the Mediterranean in Bourne Identity much more emotional and complete.

The Bourne Ultimatum is a class above most action film made today, in that is delivers one of the tensest action sequences in recent times (Bourne driving at breakneck pace through New York City) and a well developed plot, that’s grounded in a sense of reality in that this entire thing “could happen”. When people get shot they die, they don’t take a breather, get back up and keep fighting. Unless they’re Jason Bourne. In all, this is a well developed, well shot, and well directed film that’s as fitting a finale to the Bourne journey as you could want.