Review : Brutal, bruising crime movie with a costumed hero to boot, The Dark Knight is uncompromising style and substance mixed to create a perfect cinematic feast.

What can be said about The Dark Knight that hasn’t already been mentioned in countless articles, unlimited press interviews and critical analysis?

Yes, The Dark Knight is one hell of a film. It’s a far cry from Batman Begins in terms of it’s complexity, the dark themes explored and the horrific nature of what Batman represents and what he fights against. I was hard pressed to see how this film could rate any less than MA15+ here in Australia, and even now, I have my concerns that The Dark Knight is improperly rated. 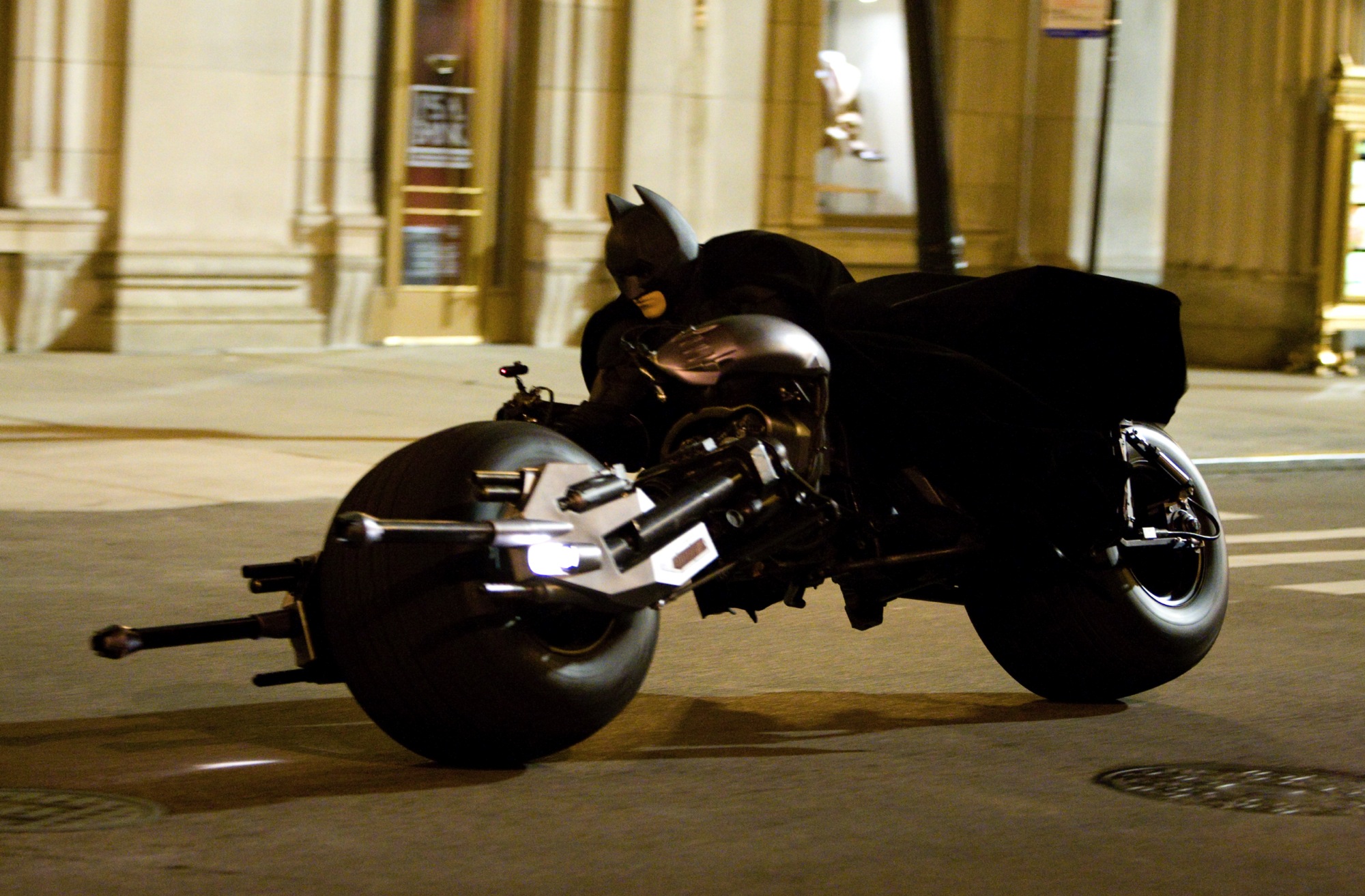 Before we explore that, however, I thought it would be necessary to give you my positive thoughts on the film. Director Christopher Nolan and his screenwriting partner David Goyer (who also writes for DC Comics) have perfectly captured the essence of Batman. Unlike the latter Batman films while Joel Schumacher had control, Batman is not really a cartoony, campy character. He was born out of death; that is, the death of Bruce Wayne’s parents. He is a figure of fear, of vengeance and retribution against the oppressive, the evil, the destructive. He is, and should always be, dark. Fear is never funny, it should never be watered down to simple levels for a mass audience to consume. This, essentially, was the pitfall that Batman Forever and Batman & Robin fell into. Batman, as originally themed in the comic books, is everything his counterpart in Superman is not. Superman is a beacon of light, a figure we can look up to and aspire to emulate. Batman is a figure of darkness, a fear-mongering hero (almost an anti-hero, but not quite) who uses criminality’s own weapon against it. Therefore, it makes sense to give Batman a film that he can feel at home in. His life is never easy, his choices are always hard, and unlike the almost omnipotent Superman, he is ultimately only a man; albeit a man having to make the hard choices, and live with the consequences.

Nolan’s handling of the characters in the comic books, and their subsequent translation to the filmed medium, should be applauded. He has taken the best and worst elements of each character, and created screen characters that feel real, rather than gaudily dressed clowns larking about for their own amusement. Leaving Batman aside for a moment, we have this film focusing on a number of different character arcs. Gordon’s ascension to the top level of the police ranks is one. Harvey Dent’s descent into madness is another. The Joker is on an arc all of his own, and Bale’s Batman is suffering from a seemingly large lack of sense of success. 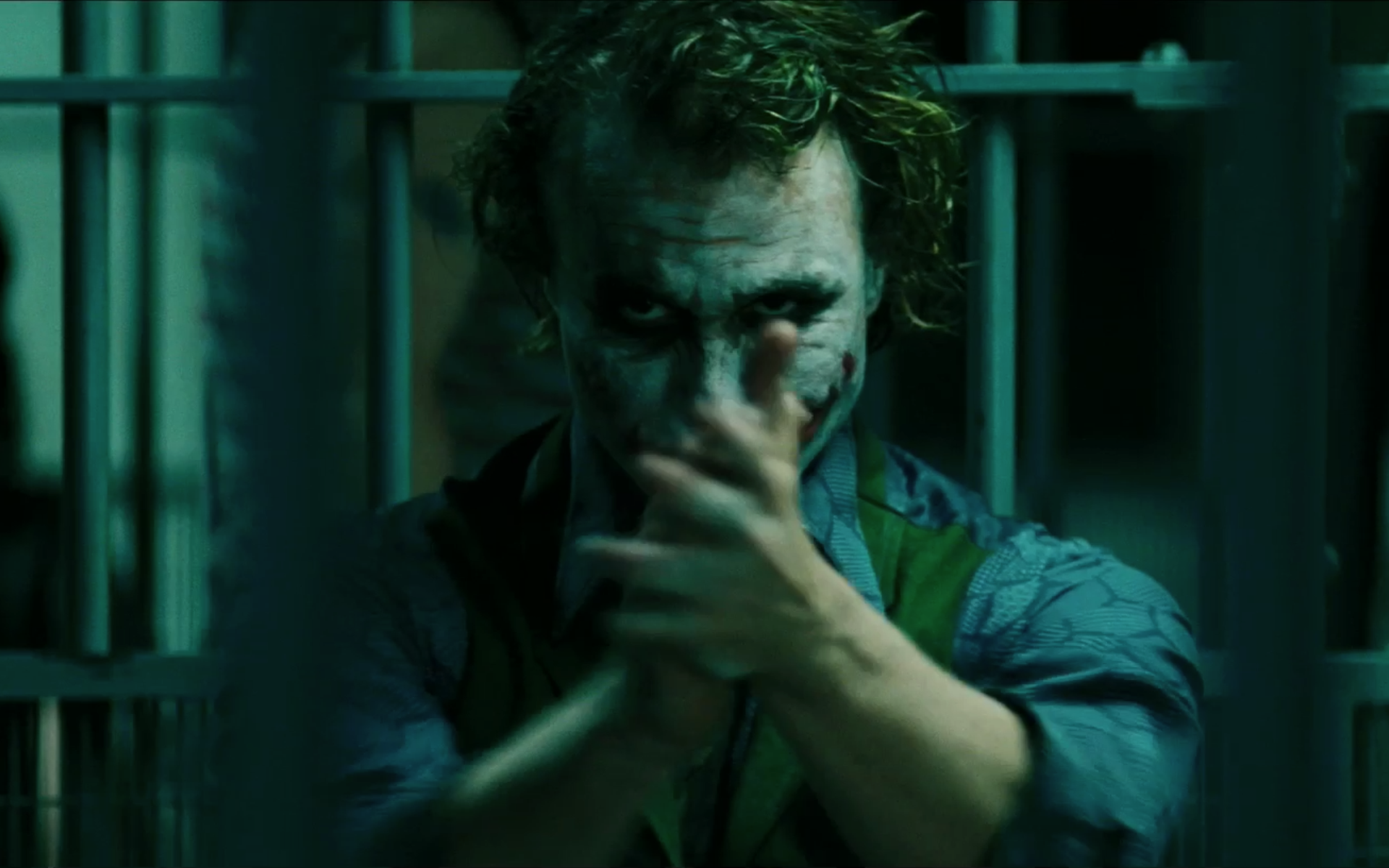 Rachel Dawes slides uncomfortably into the mix, played in this film by Maggie Gyllenhaal, who manages to make us forget about the Katie Holmes version, yet still manages to be a little nonplussed to be included. In fact, it’s perhaps a problem with the character itself that makes this particular character arc of the film the weakest. While in Batman Begins it was made clear to Bruce Wayne than Rachel would only be with him in the event Batman was no longer around, here, that point is rammed home seemingly verbatim each time the characters cross paths. That’s not to say it’s a valid story point, it’s just that it seems to have become an excuse, not a reason.

So does Heath Ledger deserve that posthumous Oscar everybody keeps mentioning? Well, he certainly deserves something, because his performance in this film is simply astounding. In fact, I would go so far as to say that in The Dark Knight, somewhat as a parallel to events in Tim Burton’s Batman duo of films, the villains here completely outshine the major hero. But not by a lot. Ledgers wildly unhinged portrayal of the chief villain of the piece is absurd, insane, and utterly frightening. Finally, the cinema gets a Joker worth watching. In the comics, the Joker is an insane killer, utterly irredeemable to Batman’s tormented psyche. Here, he’s utterly insane, and the perfect counterpoint to the hero. Twitching, cunning and utterly unpredictable, Ledger has created the ultimate screen villain for our times. Sitting alongside Darth Vader and Hannibal Lecter, Ledgers’ Joker is a true film wildcard. But is it worthy of an Oscar nomination, let alone a win? I’ll go out on a limb here and say: probably not. No doubt the powers that be will at least give him a nomination, however an actual win is hardly likely. Considering that the rest of the year may very well offer up other performances, it’s entirely likely that Heath will be overlooked. I’d be happy for him to be nominated, but I won’t expect much more than that.

Christian Bale delivers a Batman who is truly troubled, unlike Keaton’s more labored performances, however if there’s one thing I’ll nitpick about the characterization, it’s the awful voice they have instituted for the Bat. Bales’ voice has been augmented to be gravely, low growl, and it is utterly out of place within the character. His normal speaking voice is like a peal of thunder, throwing the reality of the rest of the film out of whack. Even just “chatting” to Gordon on the rooftop, with nobody else around, the result is jarring. His Bruce Wayne voice is normal, of course.

The film can be described as incredibly dark (well, really!) and certainly not suitable for children. After hearing about parents taking their young children to see this film, and then complaining that it’s not suitable for the very young, I have one thing to say: it’s rated M for a reason people! To be honest, if I’d had my say, I would have thought it’d be better off being rated MA15+, due to the large amount of violence and thematic material that will certainly not be suitable for young kids who might otherwise watch it. Some of the violence, it must be mentioned, is quite graphic. This is not a film for the young. It’s adult, and takes itself very seriously. The final third of the film, with Two Face and the Joker both on screen, is a powerful image of fear and violence, and should not be taken lightly. Two Face’s make-up, in particular, is particularly gruesome (as it should be) in keeping with the characters decent into madness, and is so utterly horrific that most kids would be traumatized for life after seeing it. As an adult, it’s even hard to watch.

So where does the film fall over? Well, it’s nearly three hours long, and that’s a real test of a comic book film: does the story hold up for that long? Well, yes, in a way, but I do feel that the film may have been better served with more of a trim. A few scenes and story threads could have perhaps been shaved off, or removed utterly, and about two hours in the film gets a little clunky in it’s pacing. But the action sequences are utterly superb, and it’s these that make the film the length it is. A prolonged finale sequence, with Batman battling the Joker and the police, utilizing a bat-styled sonar signal to determine the layout of a building, is inspired, and works really well (although is at times a little confusing for its ferocity and wild camerawork) leaving the viewer breathless by the end.

Apart from that, the film succeeds beautifully.

Hans Zimmer and James Newton Howard have created a beautiful score, echoing their work in the previous film, thunderous and tender in alternating stages of the film. You never really “hear” the score, such is the subtle work of the music; it kind of sits nicely in the background, working away and creating the right mood without ever being overblown and overpowering. The color palette is strangely depressing, muted blues and brown mixed in with limited daylight scenes (although the opening sequence sparkles with color) and by the end of the film you feel almost smothered by the blanket of doom that pervades the screen.

The Dark Knight is everything you could want in a Batman movie: violent and dark, truly inspired by the character, and seemingly without hope. Yet, throughout the film, the theme of hope is realized all the time, something you’d not think about until after the fact. I thoroughly enjoyed this film, although the tinge of sadness you feel that Ledgers performance can now never be repeated is somewhat offset by the thought that the set up for following installments leaves the characters wide open to a new, brave director to try and capture. The Dark Knight is utterly recommended, and perhaps the greatest Batman film ever made.