As far as B-grade martial-artists turned actors go, Scott Adkins has, for the most part, managed to avoid the mainstream spotlight by either choice or pure luck, turning a steady-stream of direct-to-television action flicks into a palatable career as a minor subgenre superstar. Bit-parts in action films The Medallion (with Jackie Chan), Unleashed (with Jet Li), The Bourne Ultimatum and X-Men Origins: Wolverine, as well as a plethora of bottom-shelf sub-sub-subgenre fare such as Ninja (2009), Assassination Games (2011), El Gringo (2012) and Universal Soldier: Day of Reckoning have kept the wheels of his career turning, even as he dallies with mainstream fare with the likes of Doctor Strange, IP Man 4: The Finale and John Wick 4. His filmography is actually really admirable, as a performer plying his trade without ever quite achieving the star status of the likes of Jason Statham (whom he most embodies), his idol Jean Claude van Damme, or early-career Bruce Willis. His starring role turn in Jesse V Johnson’s Guy Ritchie-lite crime thriller Accident Man (which also saw a sequel arrive in 2022) is one of the most pleasant surprises I’ve had with a film in quite a while, where, despite a conspicuously low budget, the ragged fighting sequences and gritty, snarling dialogue are thoroughly engaging and ripe with gleeful cinematic abandon.

Based on the 90’s comic creation of Pat Mills and Tony Skinner together with artist Martin Edmond, Accident Man introduces us to London-based assassin Mike Fallon (Adkins), who offs his victims in a manner that looks like either suicide or.. well, an accident. He is a regular at the local assassin’s pub, the Oasis, run by landlord Big Ray (Ray Stevenson – RRR) and frequented by a rag-tag bunch of fellow degenerates, including former special ops killers Mac (Ray Park – Star Wars: The Phantom Menace) and Mick (Michael Jai White – Spawn), Jane The Ripper (Amy Johnston) and Finicky Fred (Perry Benson – Quadrophenia), who al liaise with American associate Milton (David Paymer – Mr Saturday Night) in taking clients hit jobs under condition of anonymity. When Fallon’s ex-girlfriend Beth (Brooke Johnston) is murdered, and a conspiracy is unmasked by her new lesbian lover Charlie (Ashley Greene – Twilight), Fallon discovers that he has to take on his only friends to exact revenge, revenge that will cost him the highest price. Much like his higher profile contemporary, British action star Jason Statham, Scott Adkins has a very specific screen presence. Augmented by square-jawed good looks and an undeniable physicality, Adkins’ performance style as the grizzled, disconsolate British assassin who sports a leather motorcycle jacket throughout the film is nothing if not crowd-pleasing in the most widescreen way possible. Thanks to a screenplay by both Adkins and co-writer Stu Small, Accident Man is definitively within the wheelhouse of Adkins’ action-oriented skillset, offering plenty of bone-crunching, body-shattering fight sequences (including one between he, Ray Park and Michael Jai White that would leave ordinary men unconscious within a half-minute) and ripe, sardonic dialogue to deliver before commencing the brutality. Accident Man never pretends to be highbrow or artistic in any sense – it doesn’t have the time or budget to accomplish that – and it barely scrapes together characterization of anyone other than its charismatic leading man, leaving one to suspect this evocative and obvious aping of Guy Ritchie’s too-clever-by-half filmmaking style is less a homage and more a direct rip-off to cash in on British action clichés as much as humanly possible. 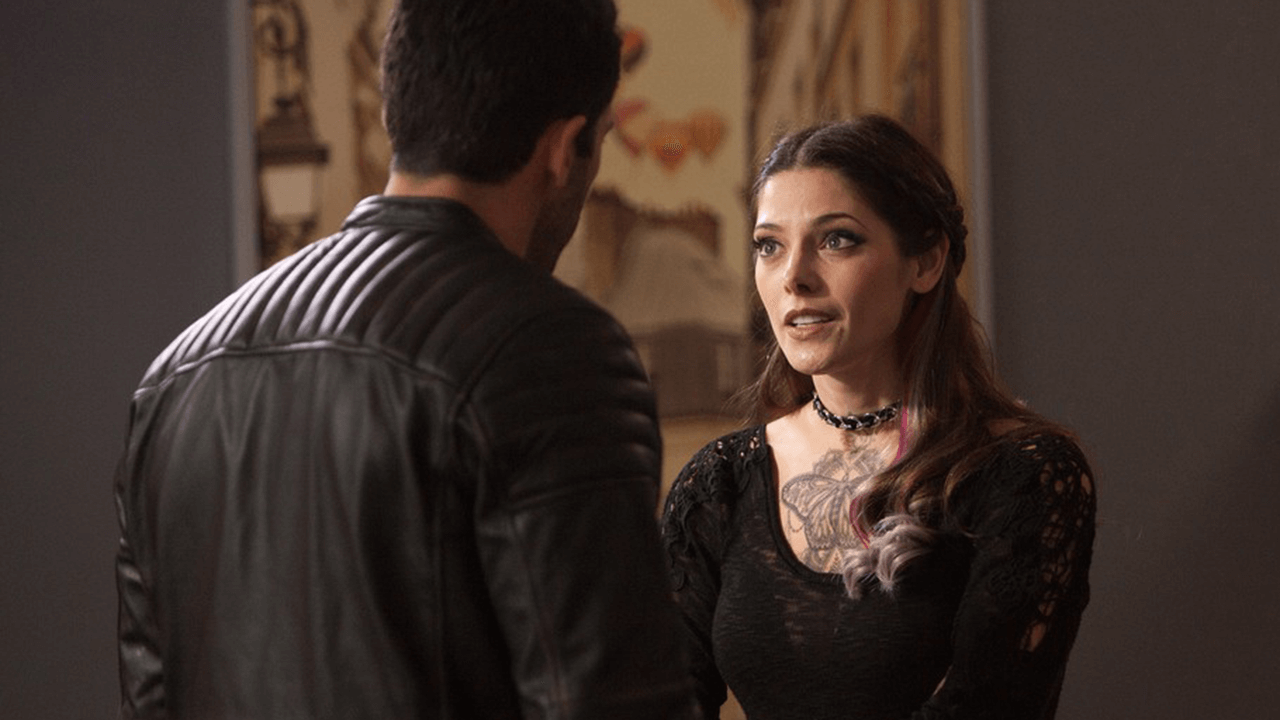 Adkins is an obvious talent, that much is certain, but director Jesse V Johnson (Triple Threat, Avengement, White Elephant) populates the supporting roster with a mix of fellow action accomplices, a couple of creepy sidebar roles, and a pairing of two legitimately sexy leading ladies – Ashley Greene, as out-of-his-league Charlie, and Brooke Johnston as his deceased former flame Beth – to generate a hugely enjoyable and engaging ensemble roll-call that easily could power solo projects of their own. Arguably the film’s best antagonist asset is Ray Stevenson as the film’s paternal swivel, Big Ray, who runs the Oasis and forms the lynchpin of the assassin game in town alongside David Paymer’s weaselly Milton, a not-quite-even pairing of willpower that draws a lot of laughs in spite of the bloody nature of the story. Stevenson is a force to be reckoned with, powering through the film as Fallon’s quasi-father (an extended flashback, drawn directly from the comics, offers insight into their relationship before it’s torn asunder by Fallon’s desire for revenge), whilst Paymer is arguably the most wretched creation within. The grab-bag of succinctly explained fellow assassins is obviously setting up later clashes of wills and skills, and the script doesn’t seem intent on dwelling too heavily on the interpersonal connections between each sidebar character other than what the narrative demands for action expediency, but there’s enough backstory within each frame of the supporting cast’s appearances to allow the viewer a chance to fill in the blanks themselves. Watching Ray Park, a noted stuntman and long-time subgenre actor, get his ass absolutely handed to him alongside another Hollywood B-movie stalwart in Michael Jai White, offers a level of unseemly cathartic pleasure not often bestowed upon a lucky audience, so make the most of it. I’ve mentioned Guy Ritchie a lot in this review (Ritchie has nothing to do with this movie whatsoever, by the by) because Jesse Johnston’s directorial style, whilst enthusiastic, isn’t entirely subtle about plagiarising from the great man. Jump-cuts, freeze-frames, whackadoodle one-shots and plenty of wince-inducing body violence – snapped arms, axes to the back and truly thunderous fight choreography, all maxed out with a blitzkrieg sound mix accompanying every wallop and whack – are lifted wholesale from the Ritchie playbook. I do not say this in a negative way, because both Ritchie and Accident Man have proven the motifs work, and work well regardless of budget, but moreso that I felt such a keenly devised sense of familiarity reduces the ingenuity with which I’d have preferred this film to play out. I didn’t catch any “Guvna” or “blimey” in the dialogue track but it certainly all felt specifically English despite being filtered through a decidedly American veneer of showmanship. Splice Ritchie with Edgar Wright and Tarantino and you’d have the Frankenstein’s monster version here with Accident Man. If it sounds like I didn’t enjoy this film, though, you should know I had an absolute blast with it. Delightfully violent from start to finish, filled with subtle wit and a terrifically charismatic leading man performance, Accident Man is one to most definitely place on your “must see” list at some point. Most of the fight sequences are superbly done on a lower budget, there’s some truly hilarious character twists here and there (although most of the film’s later coup de grace moments are telegraphed early on in the opening act – that’s okay, you really won’t care) and the momentum and energy imparted by the whole production just overrides any flaws I could find within the narrative or its surrounds. Sure, Accident Man isn’t high art, and it asks very little thinking capacity of its intended audience, so the deficits in character and complexity of narrative are swiftly tossed aside by both action and outrageous performances (at times Ashley Greene looks like she’s stumbled into the wrong film, she looks so baffled by what she’s asked to do here alongside the raging Ray Stevenson and the uproarious Ray Park), but you will forgive everything once the bruising, often superhuman fight scenes kick into high gear. This is just a wonderfully made, small-budget actioner that I can most thoroughly recommend as an instant cult classic.