Modernised retelling of Dickens’ “A Christmas Carol”, transplanted to a late-80’s American City, sees legendary comedian Bill Murray assume the role of Scrooge (hence the title, I guess) in a cynical, mean, incredibly sour film experience from the traditionally fun direction of Richard Donner.  Few films have had the seasonal lustre from the 1980’s quite like Scrooged, so much so that it remains a perennial television classic replayed each year across the United States, although perhaps not with quite the charm of alternative seminal favourites such as It’s A Wonderful Life, which itself seems to mirror the “alternative future” sequences of Dickens’ classic novel. At the time, the film was a roaring box-office success, despite a reputed troubled production and Murray’s return to acting following a break after the release of Ghostbusters in 1984. Noted for its glut of celebrity cameos, Scrooged’s dark humour and Murray’s off-the-wall leading man performance were ubiquitous at the time and almost guaranteed a hit, especially with the noted Ghostbusters star re-teaming in another project containing spectral co-stars; in retrospect, however, Scrooged hasn’t aged all that well. Murray plays angry, vindictive television network executive Frank Cross; he treats his personal assistant Grace (Alfre Woodard) like dirt, fires one of his team on Christmas Eve (Bobcat Goldthwait), and poorly attempts to reunite with a former love, Claire (Karen Allen) through a series of increasingly idiotic outbursts. He sucks up to his boss, Preston Rhinelander (Robert Mitchum), and is being cuckolded for his own job by upstart Los Angeles network dudebro Brice Cummings (John Glover), all the while trying to put together a live broadcast production of Charles Dickens’ classic story, “A Christmas Carol”. When he is warned by the ghostly skeletal visage of his dead former boss, Lew Hayward (John Forsythe), that he will be visited by three Ghosts – one of Christmas Past (David Johansen), one of Christmas Present (Carol Kane), and one of Christmas Future (Robert Hammond) – Frank mocks the scenario, until the ghosts arrive and showcase all his misdeeds and shitty life choices in order to force him to become a better person.

I hate to say it, but I found Scrooged to be an atonal mess. Jumbled humour, a complete lack of chemistry between Murray and the luminous Karen Allen as his on-screen love interest, a series of increasingly uncomfortable attempts to throw pathos into the mix, and a tin-ear for comedic timing make this dirge of a film a brutally unfunny slog. Dark, nihilistic to a fault, Scrooged might star one of the funniest men in 80’s comedy but it’s arguably one of the least funny films I’ve ever seen Bill Murray in. It’s not even like Murray was trying to go through a “serious phase” a la Jim Carrey in Man In The Moon or Eternal Sunshine, with Scrooged throwing as much of ol’ Bill’s ad-libbing at the screen as a single film can withstand. Most of which drop like lead, thanks in large part to the baffling choice of making him act like a complete ass for the entirety of the film. Oh sure, I get that he’s the “scrooge” of the film’s title and is supposed to be an asshole, but neither Murray nor director Richard Donner seem able to avoid the stylistic comedic trappings for which Murray became a household name to counterbalance the assholery. There’s a reason Michel Caine’s performance in A Muppets Christmas Carol makes for such an indelible presentation of the classic story, and that’s because Caine played the part dead-straight, as serious as a heart-attack, and it worked. Murray, in trying to be a cool asshole, just comes across like a childish dickhead without any redemptive quality – you quite honestly can’t find a single reason to hope he turns over a new leaf at the end – and the buffoonery and clownishness with which Murray approaches the role is a dichotomy too far for Scrooged to accommodate. 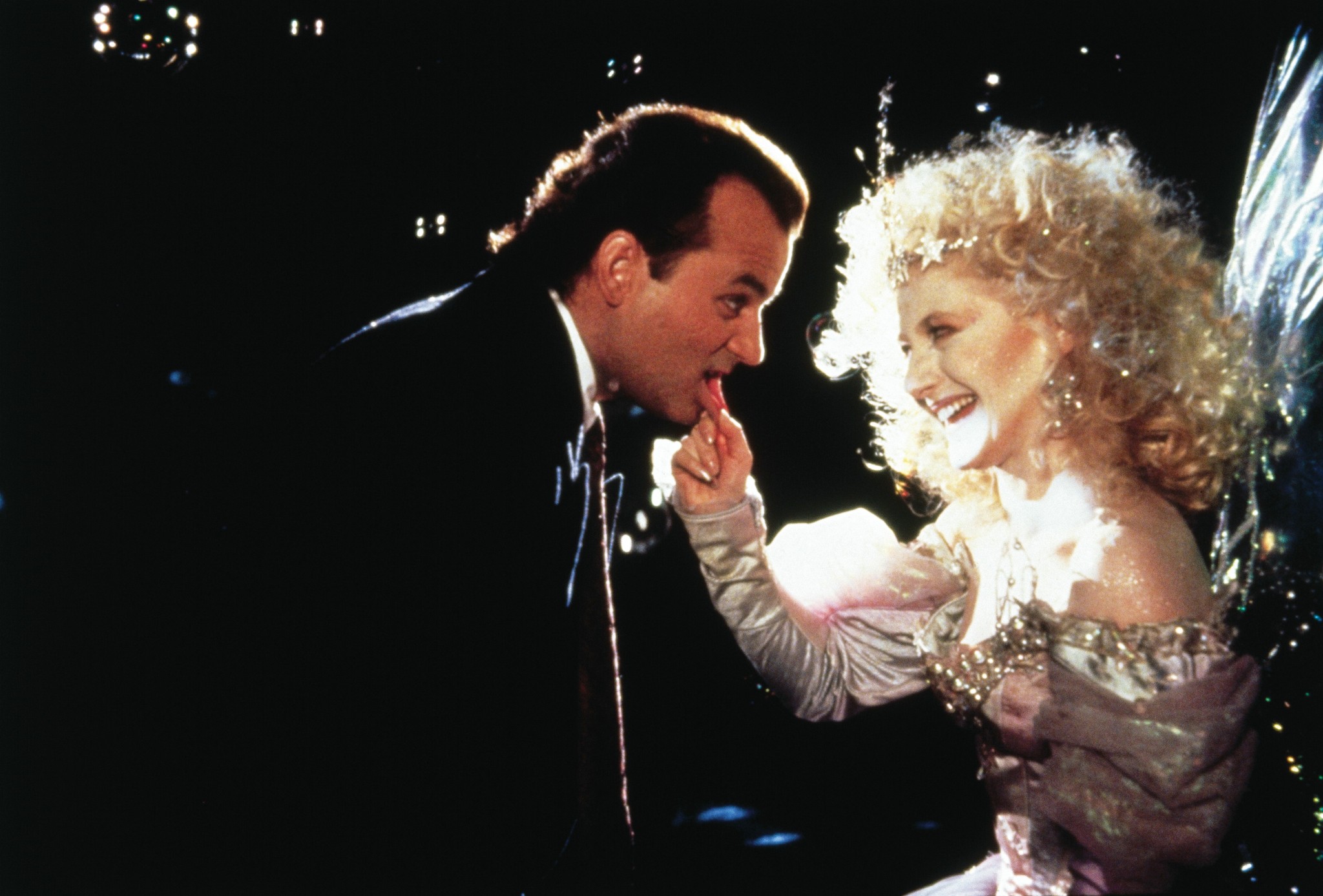 Scrooged also suffers from that cloying Hollywood problem of being overstuffed with clever, comedic cameos. I mean, everyone is in this movie – the likes of Miles Davis and Paul Schaeffer appear as buskers, late Goonies co-star Anne Ramsey as a homeless woman, Buddy Hackett as the on-screen television version of Ebenezer Scrooge, Just Shoot Me’s Wendie Malick as the wife of Bill Murray’s real-life brother John, who plays his on-screen brother as well, John Houseman as a narrator, Lee Remick as a himself in a violent prelude to open the film, and Mary Lou Retton as the televised Cratchett kid, Tiny Tim; this film wants not for faces you can point at and say “hey, it’s that guy or gal” if you’re at all familiar with 1980’s film and television celebrity. Throw in heavyweights like Robert Mitchum as a weirdly idiotic network boss, John Glover as a sycophantic fellow exec, and Bobcat Goldthwait as an ex employee who takes to Murray with a shotgun in one of the film’s least pleasant moments, and you have a film flooded with thespian diaspora the detracts entirely from the main themes and tone of the movie. Even poor Karen Allen, working as hard as she can against Murray’s ebullient and often screeching mugging to the camera at every possible moment, can’t sustain the film’s indifference to its own Dickensian message. 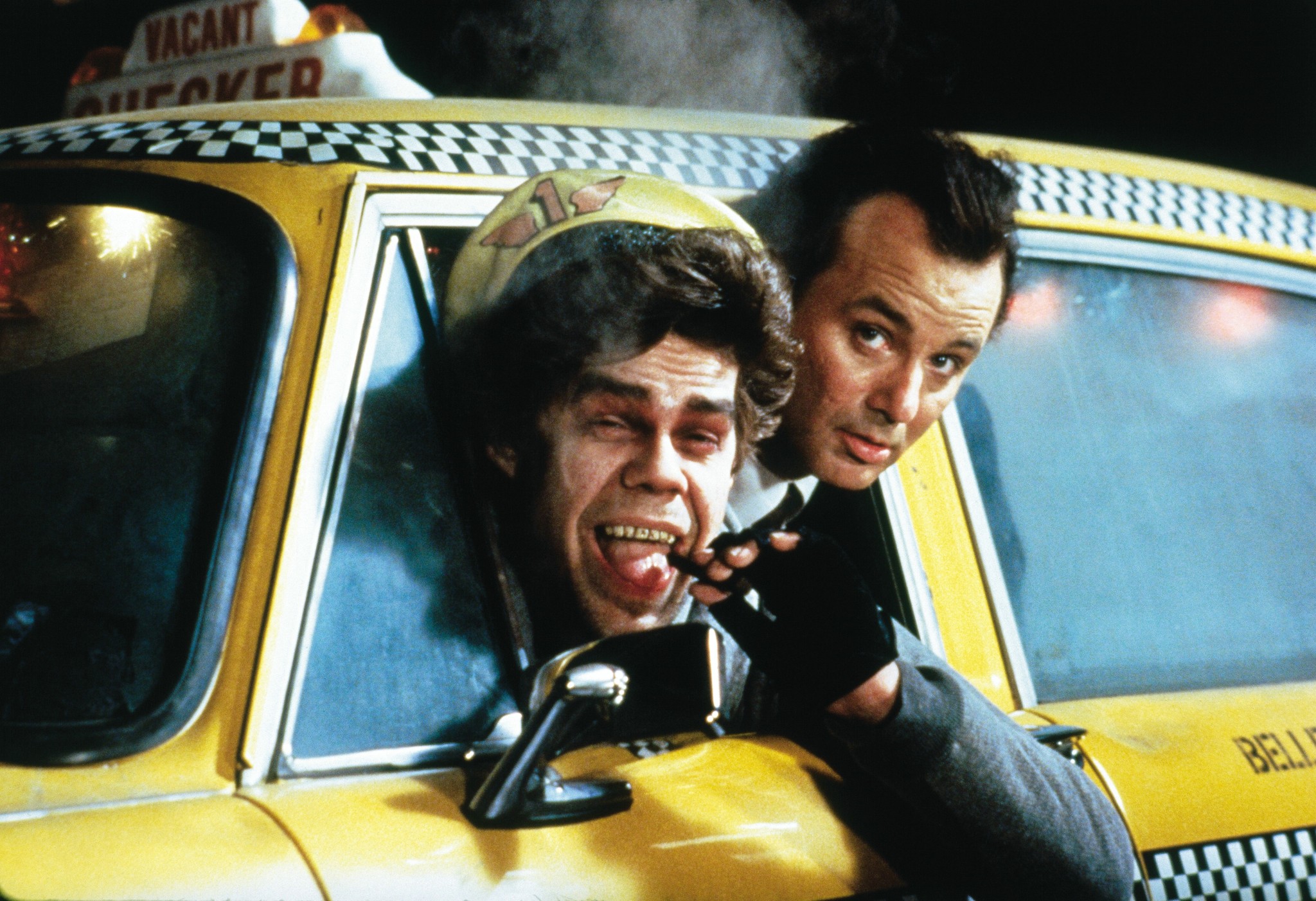 I mean, for a film that’s trying to almost be a comedy, Scrooged is incredibly dark. Like, mean-dark, not scary-dark. Homeless people dying of extreme cold, disgruntled employees shooting up the office, spousal abuse, child poverty, unemployment; there are some truly sinister undertones to Scrooged’s attempts at black humour and they rarely work. Some of the film’s sequences are incredible uncomfortable to watch in today’s more politically correct age, with the 80’s dialogue – sexism, misogyny and a general disdain for everyone not straight, white and middle-aged – rankling the nose at just how off-putting it all is. Depending on what you read, much of Scrooged’s screenplay – credited to SNL alumni Michael O’Donoghue and Mitch Glazer – was jettisoned in the editing stage for more of Bill Murray’s off-the-cuff performances, resulting in a trainwreck of stuttering, incoherent ramblings from Murray and a listless pacing. If that is the case, poor Richard Donner, a director not noted for his comedy chops, was up against it trying to form some half decent film out of what is a violent, petty, dispiriting movie about finding the joy in the Christmas season. The main problem is, most of the rest of the cast also seem to either hate Christmas or are super-jaded about it all, which makes Murray’s journey from hard-assed television douchebag to soft-hearted television douchebag just that little more difficult to care about. Even Carol Kane, as the shrill Ghost Of Christmas Present, seems to be suffering from an absurd lack of vision for her part – part pixie, part angel, part violent Looney Toons cartoon, Kane’s physical work against Murray doesn’t play well as the morality fable Dickens originally envisioned. 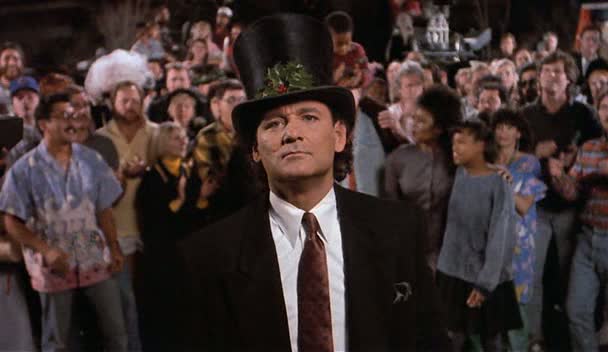 Scrooged isn’t a fun film. It struggles to find a solid tone – is it a comedy that’s not funny, or a drama that completely misses the mark? – and despite game supporting turns you can see that Murray isn’t a strong enough dramatic actor to carry an entire film on his own, which is what he’s asked to do. As a Christmas movie Scrooged also feels too cynical to really land well, despite the snow-blown television sweetness of the in-film production, and Murray’s protracted and incoherent soliloquy for a finale is a groaner even for people who think Hallmark films are high art. A desolately emotionless, painfully unfunny or enjoyable torture test of seasonal sadness, this is one take on “A Christmas Carol” that’s best left alone with a “bah, humbug”.