Few Australian films have entered the pop-culture zeitgeist quite like George Miller’s 1979 low-budget classic, Mad Max. Shot on a shoestring budget (as most Australian films from the era were), Miller’s post-apocalyptic dystopian revenge thriller shot star Mel Gibson to Hollywood superstardom and spawned three sequels – the most recent, Fury Road, saw Tom Hardy and Charlize Theron step into the desert apocalypse Miller alluded to in his earlier movies – and gave rise to a wave of Aussie cinema finding its way offshore to wider audiences. Resonating with a disaffected youth soon to burst into the halcyon 1980’s , Mad Max Rockatansky’s addiction to violence, his uncompromising sense of justice and his eventual rage-fuelled revenge have become the stuff of legend, almost defining an archetype for a generation and setting the stage for a legion of clones and ripoffs attempting to capitalise on Miller’s hard-edged vision of a sadistic future. 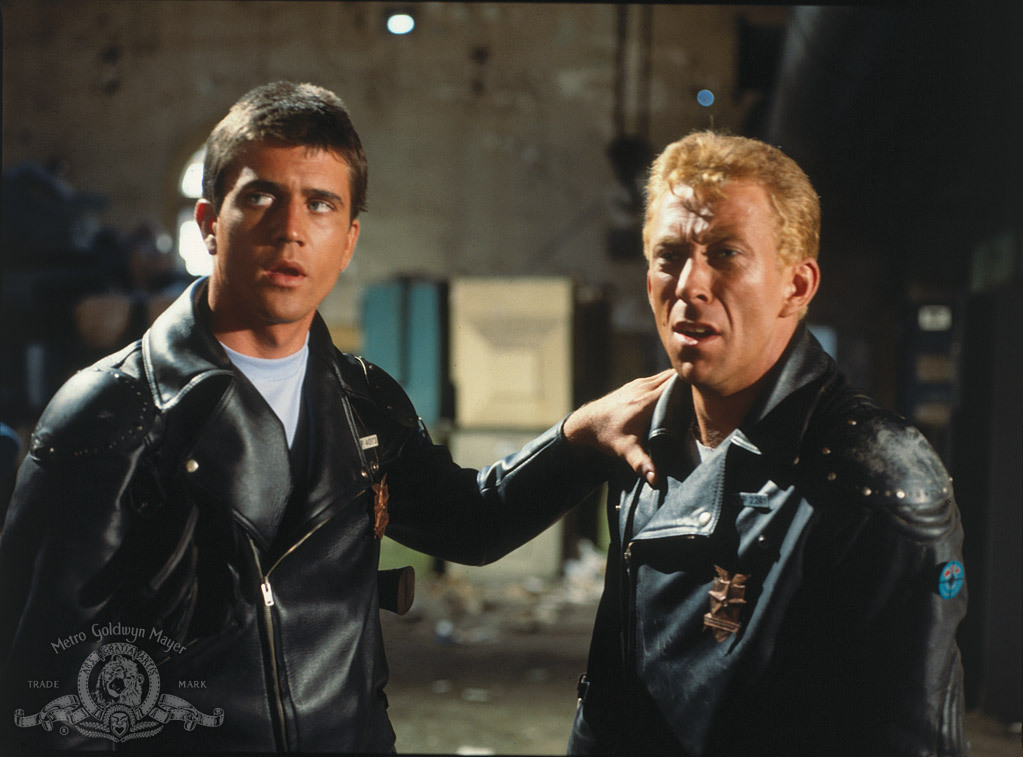 Gibson stars as Max, an officer in the Main Force Patrol law enforcement group, rides the byways and backstreets of an apocalyptic near-future dystopian Australia, where society has crumbled and is now terrorised by an outlaw motorcycle gang run by the cruel Toecutter (Hugh Keays-Byrne). Estranged from the violence he witnesses every day, Max leaves the force behind, escaping to the country with his wife, Jessie (Joanne Samuel) and infant son Sprog (Brendan Heath), until the violence perpetrated on his fellow officers, including friend Goose (Steve Bisley), as well as the general public, forces his hand. Max is pursued by Toecutter and his gang, putting the lives of his wife and child in jeopardy, and when the unthinkable happens the once-proud officer sets off on a mission of bloody revenge.

Abrasive. Dour. Masochistic. All words that could adequately describe both Mad Max’s milieu and tone, a chaotic and rambling action thriller that feels like a home movie more than a legitimate action classic. Revered in Australian culture today despite mixed reviews on release, the lustre of Gibson’s iconic performance as Max would be repeated in two sequels and cement the character as a legitimate legend of the big screen. Legendarily shot without permits around the streets of Melbourne and on many of Victoria’s backroads and highways, in ways Miller would describe as “guerrilla filmmaking”, Mad Max’s hacked-together feel and appropriately grungy style would become synonymous with the franchise’s decaying, maudlin outlook and Miller’s frenetic, over-the-top action sensibilities. Although lacking a budget for the big stunts and giant setpieces he’d utilise in Fury Road, Miller’s early epochal masterpiece remains a tautly directed, well paced and inventively stylish first outing for Max, based on a screenplay he wrote with Byron Kennedy, his producing partner who would tragically be killed only a few years later in a helicopter crash just outside Sydney, aged 33. 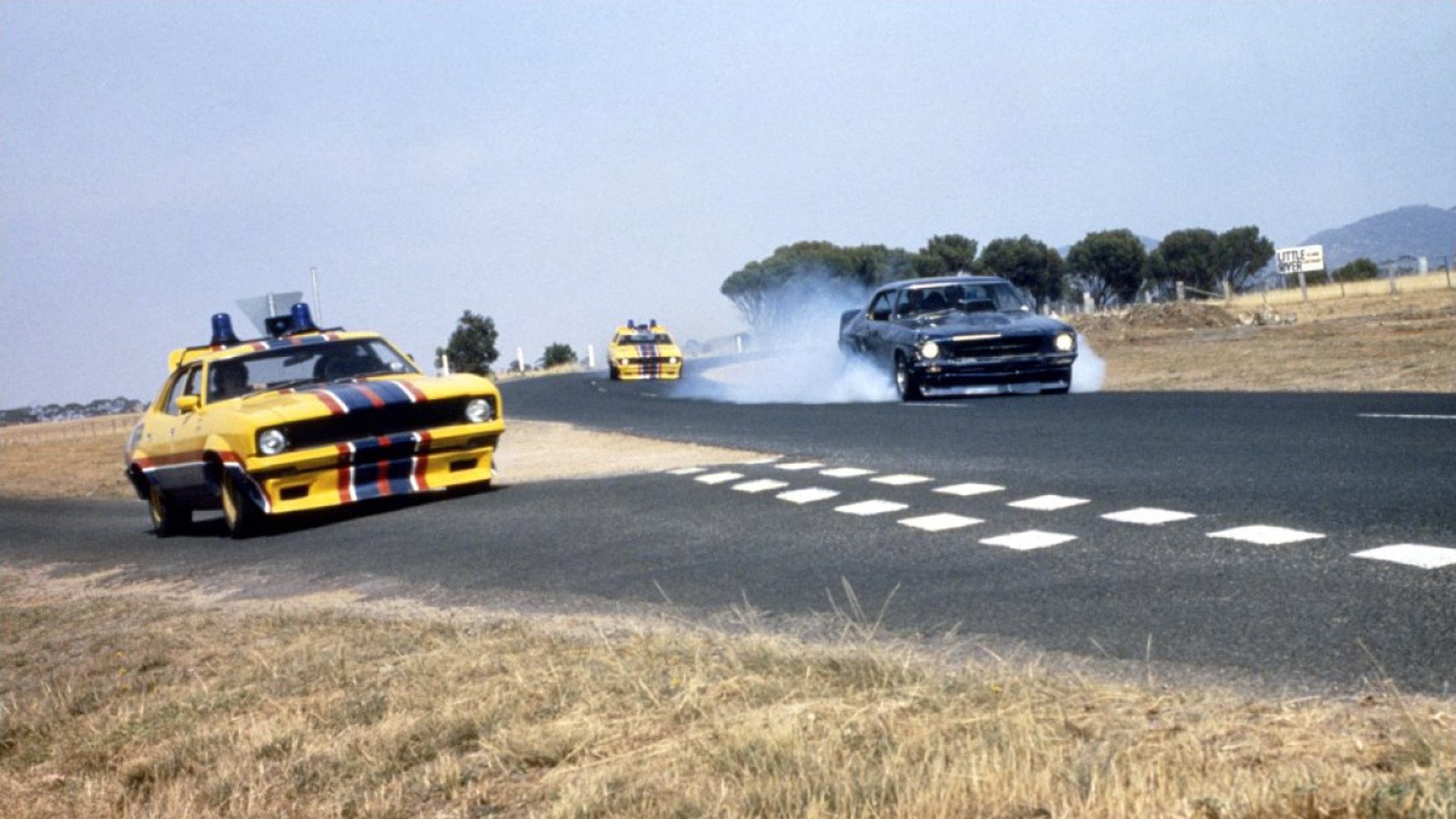 It was exactly this frantic sense of pace and unscrupulously violent aesthetic that turned Mad Max into a classic of the action genre. It’s easy to find Miller’s wanton bloodletting and sadistic sense of harm mirrored in the likes of Peckinpah’s The Wild Bunch or Paul Verhoeven’s similarly dystopian RoboCop, but unlike, say, those filmmakers, I get the sense that Miller is less concerned with subtext or humanity or social commentary, and more interested in cool action and entertaining characters. Mad Max is nothing if not populated with characters one could describe as eccentrically insane – the film’s opening car chase sees a nutjob known as The Nightrider (Vincent Gil) take on several of the MFP vehicles in a series of high speed escapades and come off second-best, whilst Toecutter’s motorcycle gang look like the casting culls you’d find from a Wrong Turn movie – but they’re all thoroughly memorable, despite not being afforded ground-breaking character development. Hell, even Steve Bisley’s rapaciously loudmouth Goose, who delights in the violent reprisals he gets to wreak under the governance of a police badge, is a simplistic, hedonistic character just living an existence in a debauched, fragile world. 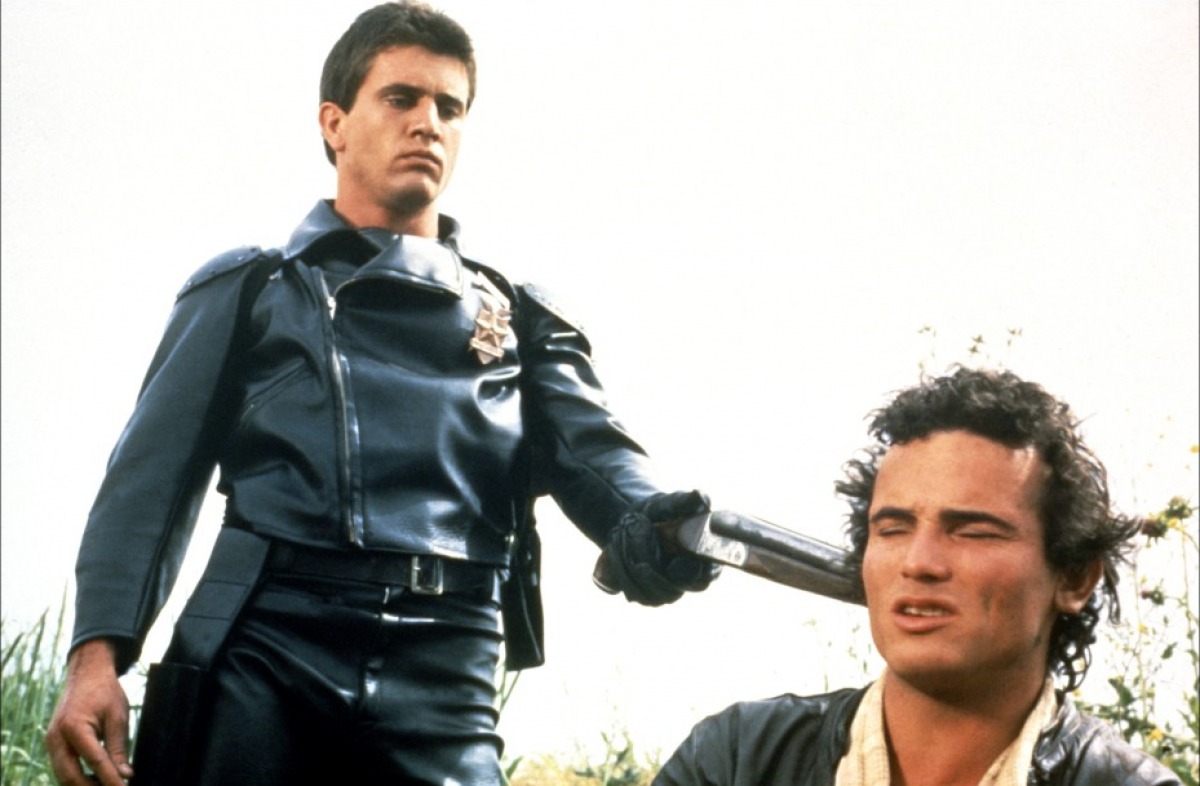 It’s through this savage lens that Miller crafts a kind-of Cowboy Western approach to story structure, punctuated by fits of energised vehicular action and tense hand-held dramatic brawling. It’s almost a surprise to find that Mad Max, notable for its legendary violence, doesn’t have a lot of blood or gore involved. Instead, most of the body horror and carnage is implied, off-screen car wrecks and deaths weighted through implicated violence and carnage when in actual fact you don’t ever really see a lot of death or destruction other than machinery and buildings getting totalled. Make no mistake: the bad guys get their comeuppance and Miller delivers it with a rapier-like shock-value style, but by and large a lot of the deaths we “see” in Mad Max are only alluded to, rather than implicitly depicted. The action, one of the film’s highlights, is shot for-real and in-camera – in the days before visual effects foregoing danger to the filmmakers – and it’s a visceral, windswept style Miller juxtaposes against the bleak nature of the setting. The car chases feel terrifying because the cars all look like they’re one the verge of losing control, with the open-road landscapes offering a surprising amount of context to just how fast the bikes and cars are all moving. The backstreet stunts and action is indicative of the “let’s film this without permission” Mad Max enjoys throughout its hodgepodge narrative and discordant savagery, as Miller and his crew forego all kinds of safety concerns in order to achieve some of their shots. At times, Mad Max is truly breathless, even if it’s not timeless. 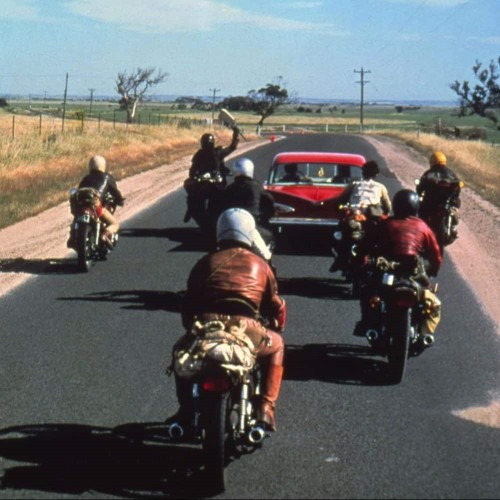 Gibson, as Max, is pure and unfiltered Early Career Mel Gibson. His clear-eyes and pristine charisma sears the screen, the actor a far cry here from his more recent fall from grace and showcasing exactly why Australia, and indeed the world, would go on to fall in love with him. His chemistry with on-screen wife Joanne Samuel is remarkable crystalline, while his antagonistic friendship with Goose is definitively “brotherly love” writ large. A snarling, scattered turn from Hugh Keays-Byrne as Toecutter shoulders the core villainy of the film, while the likes of Roger Ward, Reg Evans, Sheila Florence and Jonathan Hardy give credibility to their respectively minor supporting roles. This isn’t a film for “actors” as much as it is for “caricatures”, sarcastic avatars of retrograde creations Miller and Kennedy intermixed with their fervent action sensibilities. 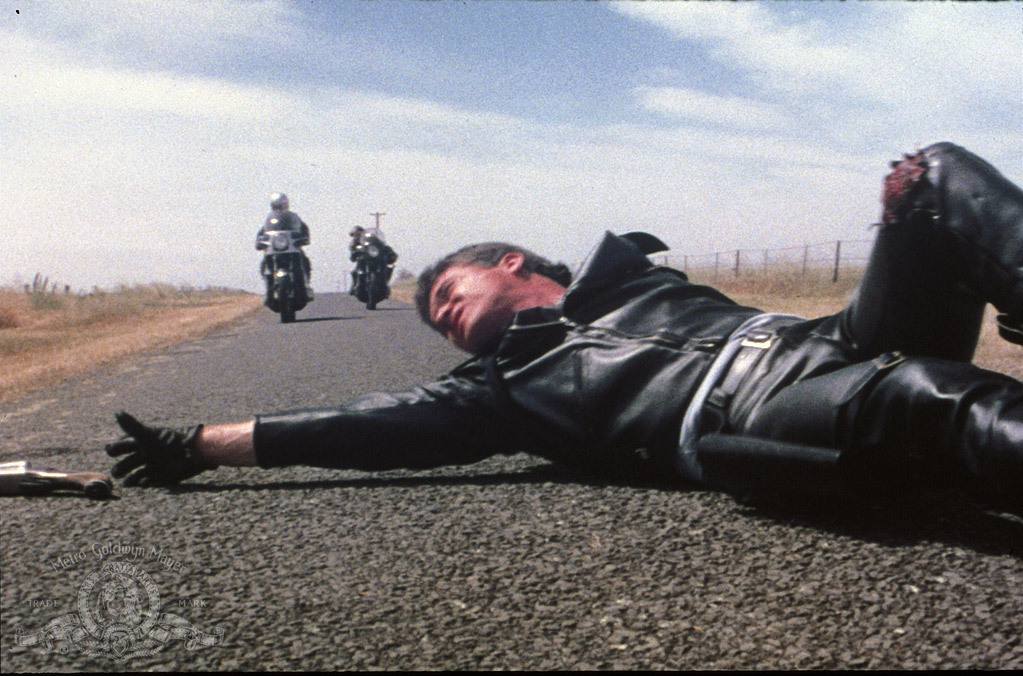 Mad Max’s sublime mix of low-budget verisimilitude, Gibson’s instantly charming and charismatic screen persona, and the film’s wanton lust for speed and violence, formed a volatile, combustible mix back in 1979. Mad Max hasn’t aged as gracefully as some of its dramatic contemporaries, and shows a little weariness in almost every technical aspect – the film was edited and sound mixed in the loungeroom of one of Miller’s friends’ apartment, of all places – the only exception being cinematography, which is fantastic. You can’t help but admire Miller and Kennedy’s chutzpah for making the film, however, for fixing their camera to car roofs and bonnets and achieving what can only be described as the impossible with so little, and with such profound impact on the Australian cinema scene. Mad Max has become the ubiquitous metonym for any film with a dystopian, usually apocalyptic setting or time period, so the film’s legacy is assured. I’m pleased to say that as an example of a directorial virtuoso and gleeful, wanton violence at hand in almost every corner, Mad Max remains a defining subgenre masterpiece.