Following several years of direct-to-streaming controversy within the Covid-19 pandemic’s closure of cinemas globally, Pixar’s Lightyear became the first of their feature films since Onward to debut on the big-screen instead of the Disney+ streaming platform, a fate not avoided by Soul, Luca and Turning Red. Lightyear, a film based on the eponymous Toy Story character Buzz Lightyear (although, not really), turned out to be a box office failure, however, grossing a tick over $220m globally from a budget of pretty much the same. Exactly why general audiences stayed away from Lightyear will likely be discussed for years to come, however the consensus among industry insiders seemed to lean towards brand confusion, perhaps put off by the fact the film isn’t a Toy Story entry but rather an adjacent property. Described by Pixar as “the film Andy saw in 1995 that made him want a Buzz Lightyear toy”, Lightyear contains all the heart and soul of a typical Pixar production, an excellent vocal cast – Chris Evans steps into the role of Buzz, controversially replacing Tim Allen – and superb production design and animation, so it’s hard to see how the film’s quality reflects such a disastrous financial return. Lightyear is actually quite charming, and fistbumps nostalgia with ease as the human Buzz depicted herein is introduced. It taps into well-known visual cues from the Toy Story films (particularly with Zurg and the opening sequence from the second film) and offers a gleefully witty, emotionally poignant adventure yarn as everyone’s favourite space ranger goes about his mission. 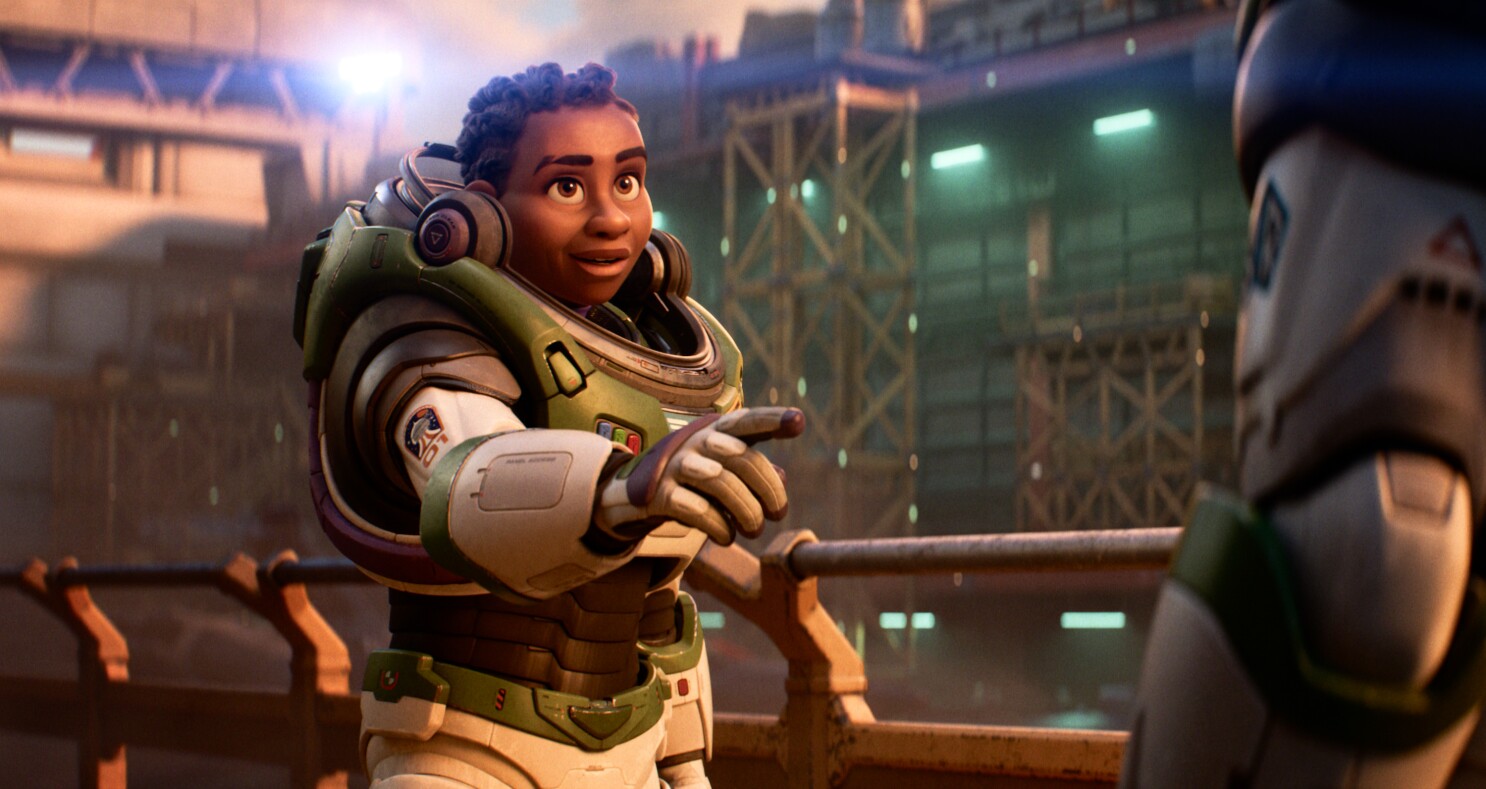 After landing on a distant planet, and crashing the ship after trying to escape particularly aggressive wildlife, Space Ranger Buzz Lightyear (Chris Evans) and his crew become marooned. His commanding officer, Alisha Hawthorne (Udo Aduba) instructs him to find a fix for the broken hyperdrive tech that will allow them to return home, however each test flight Buzz completes to test the mineral formula sees him love around four years of time back on the planet; consequently, while he remains the same age, everyone back on the planet starts to age out around him. Eventually, after a number of failed flights, Buzz returns to find Alisha has passed away, leaving him with a robotic cat, Sox (voiced by Peter Sohn), for company, and a less complimentary new commanding officer, Cal Burnside (Isiah Whitlock Jr). After an attack on the now thriving society by an army of killer robots, Buzz, together with Alisha’s granddaughter Izzy (Keke Palmer), a rookie (Taike Waititi) and an elderly parolee (Dale Soules) have to come together to defeat the minions of Zurg and save the day. 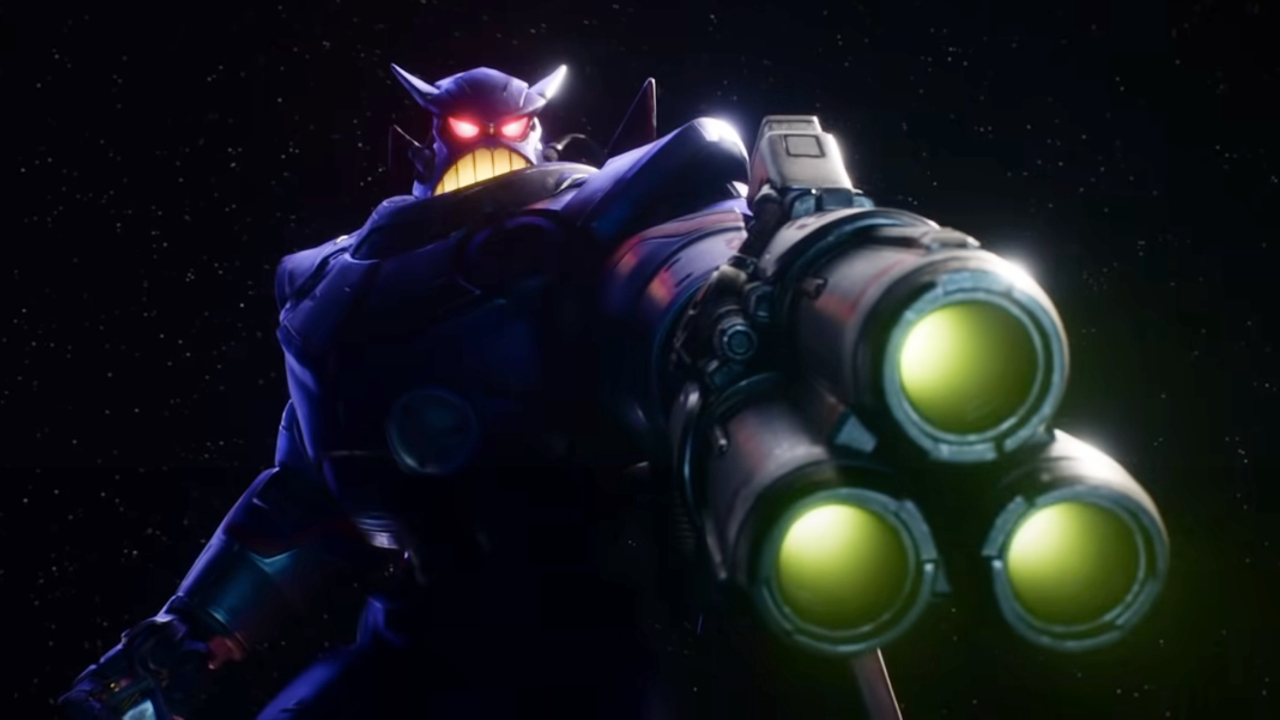 As a story I really engaged with Lightyear. The time-travel aspects of the narrative, with Buzz losing people along the way as he tries to complete his mission to save his crew, ingratiated itself thanks to Pixar’s now well-established sense of storytelling and use of emotional beats. The characters are all well rounded and fully realised, even the sidebar characters with minimal screentime have solid convictions and a sense of history within the film’s universe, and the design work on the movie is of the highest caliber. The film doesn’t try to attach itself to the Toy Story brand that much, thankfully, although there are a number of nods included (“to infinity and beyond” continues to be the refrain around which Pixar is built) and suggestions of influence on the toy Andy wanted so desperately for Christmas. Director Angus MacLane, co-helmer of Findiny Dory and now stepping into the solo chair here, obviously has a love for the character that seeps from the film’s pores and manifests as a heartwarming spectacle and personal growth arc I couldn’t help but be fond of.

Was my nostalgia for seeing Toy Story in cinemas myself back in the day colouring my thoughts on Lightyear? I kept waiting for the film to disappoint me, but it really didn’t, not terribly. Chris Evans makes for a solid spaceman, replacing Tim Allen. It seemed to me that Evans’ voice lends itself to a more serious personification of Buzz throughout the film, rather than the Allen’s more comically-minded version in the main Toy Story movies, so the swap is something I’m okay with, while co-stars like Keke Palmer, Dale Soules and Taika Watiti, who provide various comedic relief avenues, never feel like “stunt casting” in their respective performances. Even Waititi, a guy whose persona wears thin quite quickly, manages to find the balance between funny and annoying in this, which goes to show the influence of being in a Pixar movie has. The standout character in Lightyear, however, has to be Sox, the computerised cat, so somehow embodies the soul of the movie for his loyalty and bravery alongside his human counterparts. Weird how often non-sentient beings in films tend to be the most admired and accepted. The thing about Lightyear, however, is that it doesn’t feel special. It doesn’t have the same instant classic appeal as the studio’s earlier work, nor the overall progressive tone of its most recent fare. As much as I love the Toy Story franchise, I have to admit that Pixar could have removed the Buzz Lightyear name from everything and given us a pretty snazzy space adventure film that has no links at all to the Woody, Buzz and Andy films we grew up with. Having the connection to Toy Story inherent in the title comes with the weight of expectation, and I don’t think the film could ever really live up to that. It’s a good stand-alone film, sure, but there’s something about it that just doesn’t quite click. It’s less to do with the film itself and perhaps more to do with my expectations with it, particularly in light of how much Pixar notably proclaims excellence in all their products. It is excellent, and will excite (if not confuse) younger children and adults alike, but as I’ve often said with Pixar’s sequels, the feeling of repetition starts to wear out the sense of originality the studio keeps aiming for. For the most part, Pixar’s sequels – Finding Dory, Monsters University, Incredibles 2 and the Cars films in particular – have been thoroughly enjoyable and yet lesser than their predecessors, mainly because the ideas prevalent in the original films are the sum total of the best ideas the filmmakers had. Sequels tend to be “variations on a theme” and, despite the quality storytelling at hand, I think Lightyear suffers the indignity of trying to live up to its namesake’s iconic brand without really separating itself from the pack. 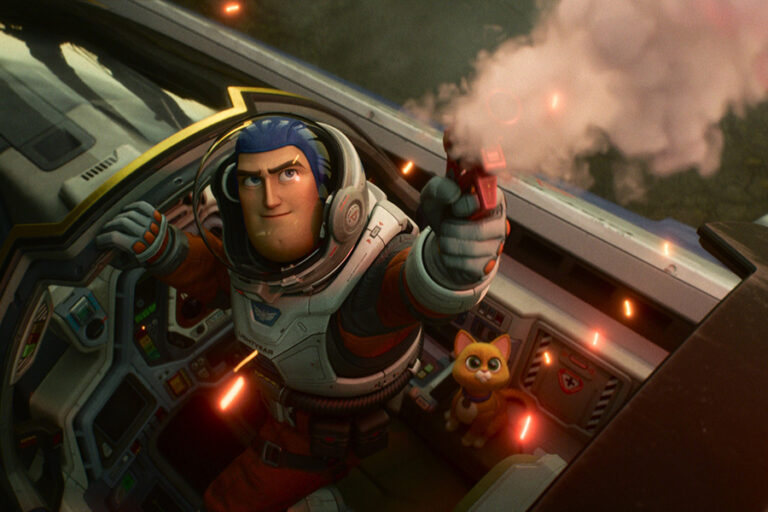 Lightyear is a hugely enjoyable space adventure film that, if taken on its own, will please all audiences. The story is heartwarming and enjoyable, the technical aspects of the film are sublime, and the aesthetic Lightyear promotes is one of rounded warmth and familiarity. In short, a pleasing outing from Pixar that, whilst trying to latch onto the same childhood endearment the Toy Story films conveyed in swathes, just misses the mark despite commendable effort.