High concept films of the early 1990’s don’t come more thunderously insipid than Andrew Davis’ Die Hard clone, Under Siege, which sees B-movie action star Steven Seagal play a ship’s cook aboard a soon-to-be-decommissioned US Battleship, the USS Missouri, after it’s taken over by a group of mercenaries. Although populated by a solid cast of actors, all of whom seem to understand the assignment of this nonsensically nuclear-ised thriller, Davis’ direction can’t overcome a contrived screenplay that plays to the widest possible demographic, without a shred of audience intelligence running the risk of being challenged. I distinctly remember loving this film back in the day – it came along at a time when action films had to continue to go bigger and more ludicrous than the ones before – and the continued gunplay and explosions on offer do amount to a relatively engaging experience in superficial cinema, but for all the sturm und drang and the conspicuously dull turn by Seagal himself, Under Siege is a disappointing outing indeed. 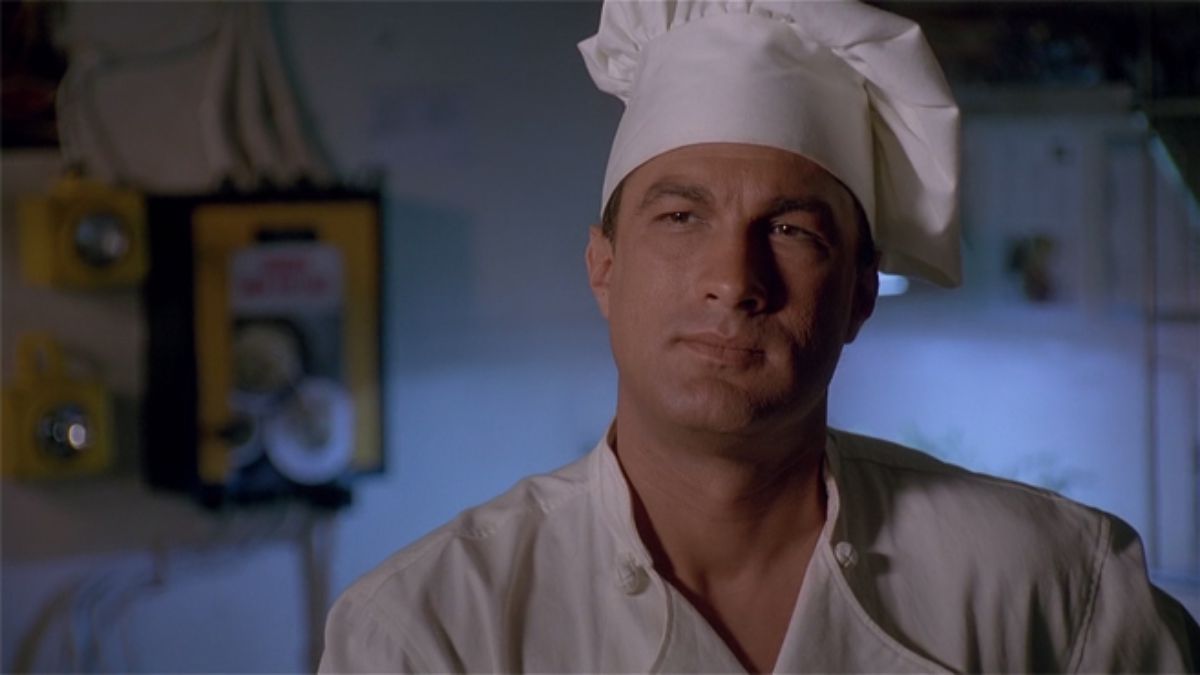 Legendary American navy battleship USS Missouri is about to be decommissioned. The dignitaries attending the Presidential visit at Pearl Harbour are unaware that a crew of mercenaries, led by William Strannix (Tommy Lee Jones), have boarded the vessel posing as a band and entertainment for Captain Adams (Patrick O’Neal) surprise birthday. Accompanying them is Playboy playmate Jordan Tate (Erika Eleniak), regretting her decision to come aboard suffering motion sickness. When the mercenaries attack during proceedings, the Missouri’s second in command, Commander Peter Krill (Gary Busey) locks the ship’s cook, Casey Ryback (Steven Seagal) in a deep freeze, unknowing that the culinary consigliere is actually a highly decorated former Navy SEAL, who will stop at nothing to take back the ship and prevent a nuclear catastrophe. 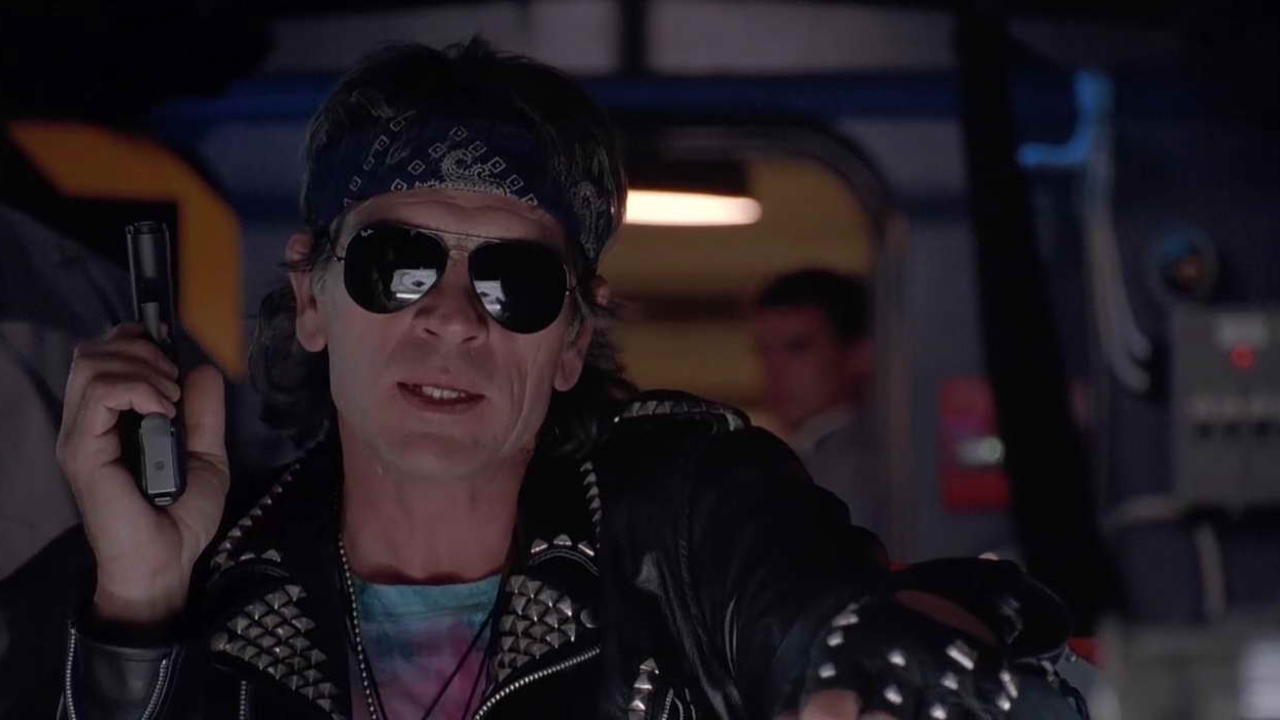 Under Siege is a distinctly 90’s American action flick. Nonsensical plot, over-the-top acting and a plethora of contrivances propelling the plot is an unsustainable mix of inanity masking the film’s chasm-sized deficiencies. Oh sure, it’s got a ton of casual murder, some nice explosions and plenty of hoo-rah militaristic fetishism (the cliched “military generals around a massive meeting table discussing options while shit plays out elsewhere” routine gets a fair run again) and Seagal playing it cool as he dispatches bad guys by the dozen, but the clunky action direction, a dire script and the sight of Gary Busey and Tommy Lee Jones trying to out-act each other in the same film kneecaps any sense of playful verisimilitude the film might have otherwise enjoyed. The plot functions only if you believe a shitload of convenient looking-the-other-way story points, with Andrew Davis going for broke to convince us that Strannix and his legion of well armed muscle could somehow come aboard one of the Navy’s most prestigious vessels without so much as a red flag on security, and then be taken down completely by one man armed with a sat-phone and some knives. 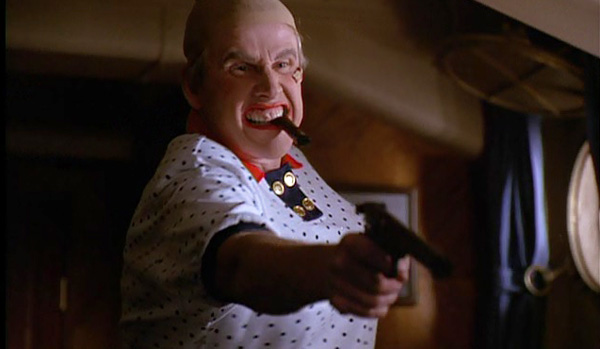 If you’re making a Die Hard movie without calling it a Die Hard movie, you at least have to understand what makes Die Hard such a classic of the genre. At the heart of this is three key factors: Bruce Willis, Alan Rickman and Christmas. The appeal of John  McClane is that he isn’t a superhero with special skills, he’s just a regular dude caught in the wrong place at the wrong time. Seagal’s Casey Ryback seems like he’s a regular guy, but the “surprise” revelation that he’s actually a Navy SEAL means that we know he’s going to be adept at taking down Strannix and his crew almost single-handedly. Suddenly, this isn’t a normie up against incredible odds, it’s a highly trained operative up against odds that are really quite even. It helps none that Seagal is awful in the role; his dialogue is delivered without perspicuity, the actor simply reciting carefully curated lines he cares very little for and wanting desperately to come across as laid-back and cool so he can bash heads later. As an action star he lacks charisma or grace, his dead-eyed gaze never one eliciting an emotional response or a sense of euphoric achievement when he achieves a positive outcome; he might be trying to be a badass but with such effortful line delivery and a routine, nonchalant action style the film sinks under his ill-defined bulk. Secondly, Tommy Lee Jones’ teeth-gnashing histrionics as Strannix, an off-the-wall bad guy played as broadly as only Jones can play them, isn’t the boo-hiss villain that Alan Rickman’s Hans Gruber was, despite having a similar plot to break in and steal stuff. Jones, as well as the wild-eyed Busey playing for the cheap seats as Krill, an incompetently sadistic Navy man scorned by his superiors, are cartoon villains and the film treats them as such, laughably inept against the stoic, calmly productive Ryback as he goes about taking everyone out. The motivations for Strennix’s actions, and his alliance with Busey’s Krill aren’t made clear enough for us to understand Krill’s disaffection with the Navy, and his apparent disdain for the very men who serve under him. Confusion in this regard makes both Jones and Busey antagonists with little chance of redemption – they’re one-note villains and I guess that’s enough for this mild little movie. I don’t think I’ll ever forget the sight of Gary Busey dancing with sailors dressed as a faux-buxom woman to the sound of raucous clamouring as long as I live. 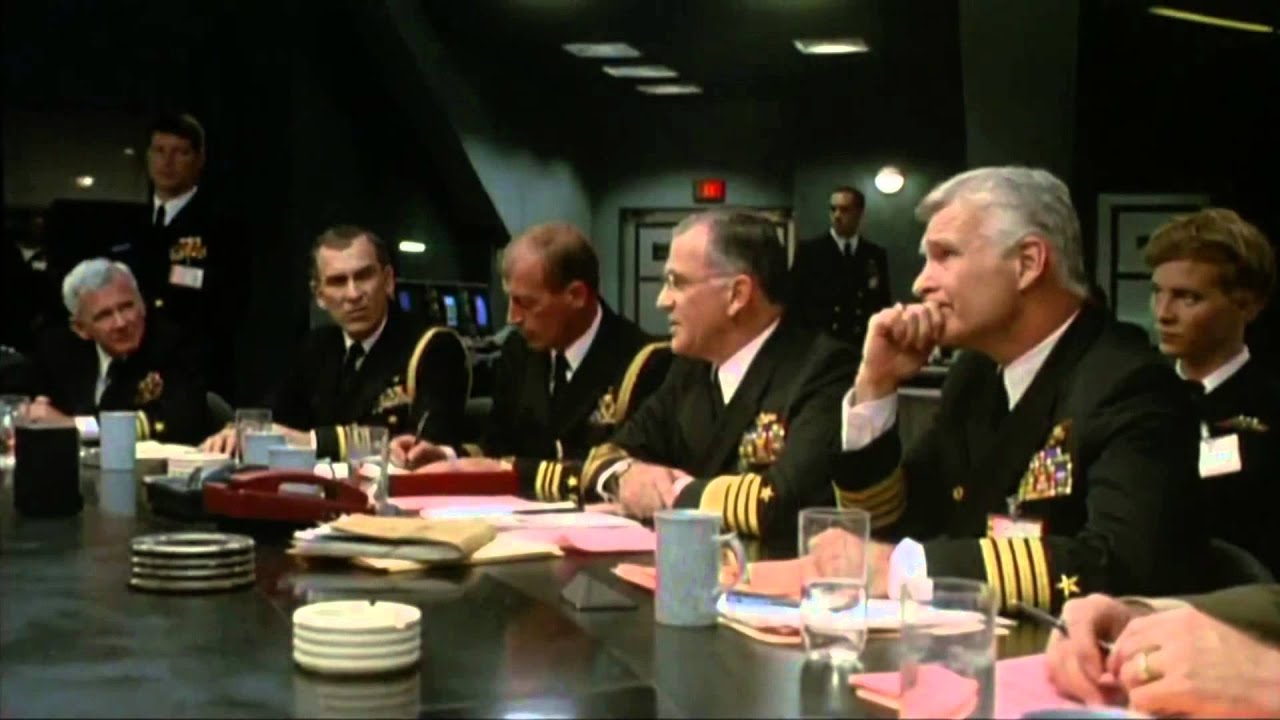 The third issue with Under Siege is that it’s unwilling to pitch itself as a film of specific occasion. Whereas Die Hard had a seasonal descriptive aesthetic it could play against, being a holiday-set narrative, Under Siege is just… explosions on a boat. That it’s the Missouri likely makes not a jot of difference to anyone outside of the United States (the film ties up a lot of early exposition explaining the vessel’s significance for the US Navy – the boat what the very same upon which the Japanese signed their surrender in World War II) and the hokum involved with the various gangways, platforms and bulkheads we navigate through a variety of action sequences tend to limit options for inventive action. The Nakatomi Plaza tower was a multi-tiered action playground with a glut of architectural landscapes to play in, whereas a battleship… well, it’s all steel and iron plating and there’s a sense of familiarity to it all that the film can’t escape. The confined quarters of the film’s central edict means the whole thing needs to rest on characters audiences can engage with or empathise with, and, outside of then-Baywatch star Erika Eleniak’s sexpot bunny role, nobody here is fit to scrape dogshit off John McClane’s boots. 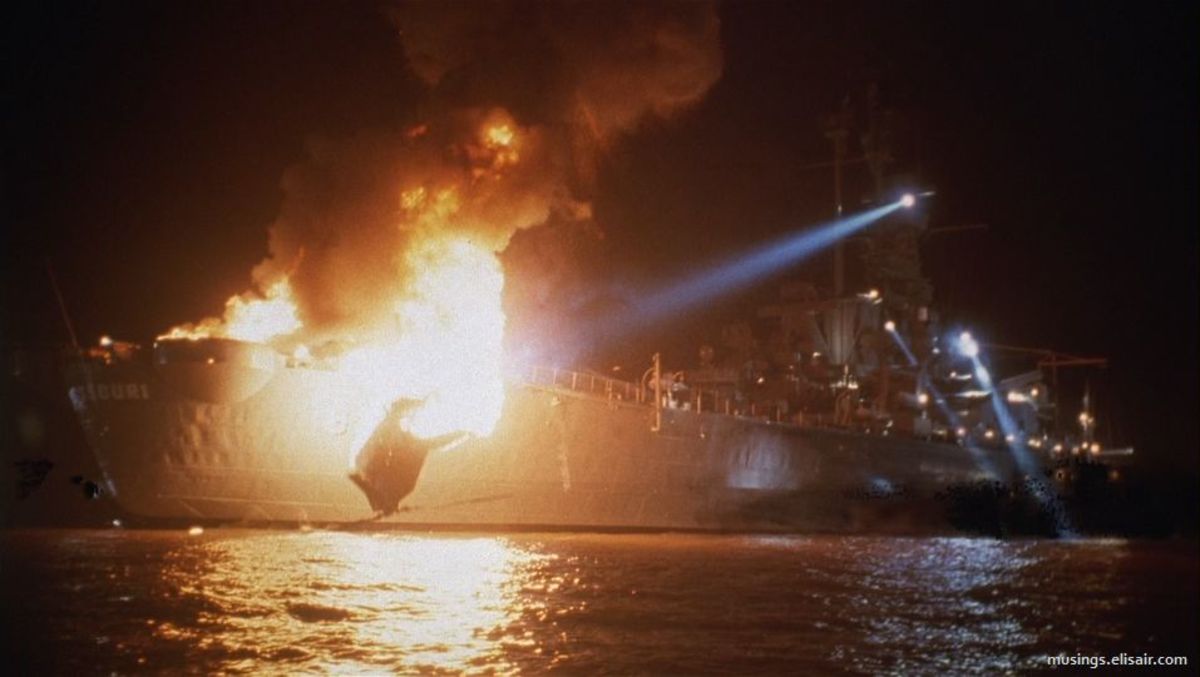 It’s something of a knock on Andrew Davis, a noted action director, than Under Siege’s weakest elements are the action sequences. As fast paced as Under Siege is there’s a knockabout tone to all the brutal death, sudden impact explosions and generally apocalyptic machinations occurring aboard the Missouri. The added element of nuclear missiles being stolen and/or fired at a populated area notwithstanding, the various brawls, headshots and explosions never quite feel as authentic as one expects – Davis’ maximises the film’s budget by blowing a helicopter off the bow of the Missouri in one grandstanding moment, but the vast majority of the remaining 90 minutes feels small and insular rather than epically widescreen. For a film lacking characters worth watching, we needed to feel the spectacle a lot more than the movie ends up giving us. The lauded final knife fight between Jones and Seagal, one of the much-hyped moments back in the day, is a laughably edited, derisively humorous piece of cinematic malarkey, with the sound mix doing a lot of the work in making us believe Seagal and Jones’ seizure-like fighting styles are in any way dangerous. The climax of the fight – the moment the whole film is building to – sees Seagal bite a knife out of Jones’ hand and then gouge out an eyeball. Exactly why Ryback, a trained Navy SEAL, would willingly clamp his teeth down on a knife mid-fight we’ll never understand but… well, that’s it. To see Jones’ sadistic Strannix just… let it go? Even funnier. 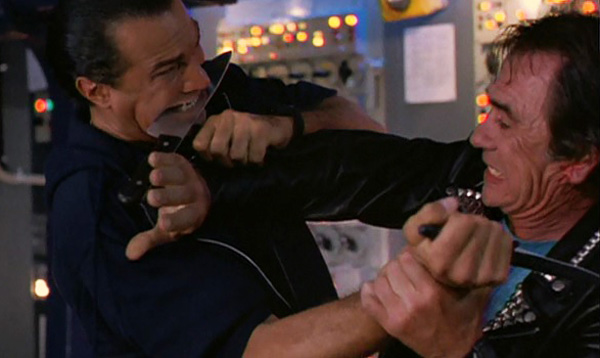 Under Siege isn’t a great film. I’d argue it isn’t even a good action film, because it fails to utterly to ensure it does the one thing all good genre films need to do: entertain. From the contrived plot, the nonsensical screenplay demanding the actors behave in a way no human being would ever act, to the inexplicably lifeless action sequences that baffle and confound, Under Siege’s prestige as a Seagal high-point isn’t really warranted or earned. That it was the highest grossing film of the year is an astounding achievement, which says a lot maybe about how undemanding audiences of the 90’s really were with these kinds of things. Watching it today the seams come apart, the atrocious acting will make you gasp, and the astoundingly terrible plot mechanics might just draw out some unintentional laughter. The film ends with Seagal, having saved the day, and without once bothering to set Ryback up as romantically invested in Jordan one iota, planting an enormously dispassionate kiss upon her lips. Why? Because in this hysterically patriotic piece of garbage, when the good guy saves the girl, the good guy gets the girl. Ugh.