James Wan’s success rate at developing horror franchises continues with this, the third official Conjuring film (and the ninth entry in the franchise, which includes the Annabelle, Nun and La Lorona spin-off films) takes on yet another true-crime case as its backstory, this time involving a young man accused of murder who claims he was demonically possessed at the time. Once again, ghostbusting duo Ed and Lorraine Warren, played by a solid Patrick Wilson and Vera Farmiga, tackle the supernatural in this heady mix of spiritualism and bone-crunching exorcism, and although not directed by Wan himself, is still an effective and pleasantly mild genre outing, offering a glimpse into where the franchise might head moving forward. In 1981, demonologists Ed and Lorraine Warren are attempting to exorcise a demon from the body of 8-year old David Glatzel (Jullian Hilliard), alongside members of the boys family, including his sister Debbie (Sarah Catherine Hook) and her boyfriend Arne Johnson (Ruairi O’Connor). Th exorcism takes a turn, however, when the demon leaves the young boy’s body and transfers itself into Arne, unknowingly to all but Ed, who has a heart attack. An affected Arne tries to continue with his life but, after an afternoon of drunken revelry he kills his landlord, whereupon he is promptly arrested. Digging deeper into the case, Lorraine and Ed try to determine where the demon was summoned from, discovering it is part of a curse placed upon the Glatzel family by the demented occultist daughter of a retired priest (John Noble), one Isla (Eugenie Bondurant), and have to battle their own inner demons to break the curse and save Arne from certain doom. 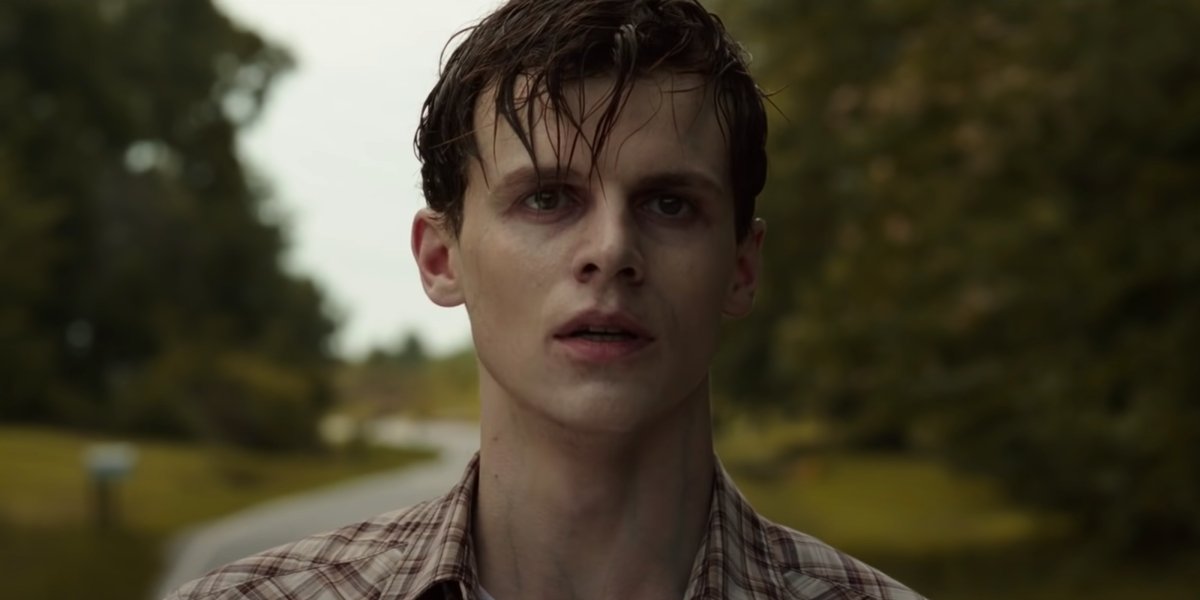 Loosely based on the true story of Arne Cheyenne Johnson, who claimed to have been possessed by a demon on the day he murdered his landlord, Bruno Sauls, using that as a defence in a landmark legal case back in the 1980’s, The Conjuring: The Devil Made Me Do It heavily fictionalises the account and grafts plenty of Hollywood sparkle onto the story. As with the rest of the Conjuring universe, The Devil Made Me Do It is heavy on demonic and horror iconography, although whereas in previous films the central “villain”motif is something tangible, such as an evil nun or possessed doll, here the dark spirit seems to be an ephemeral nothingness personified by a cruel human being. Directed by The Curse of La Llorona’s Michael Chaves, taking over from James Wan (who produces and is creatively involved, having developed the story with screenwriter David Leslie Johnson-McGoldrick), The Devil Made Me Do It is a middling horror film at best, failing to lean into its horror cues as often as I’d have liked (several body-twisting scenes of exorcism are well done, but minimally worked into the story) and we spend a lot of time “investigating” without a lot of gotcha creepy scares. Where there are moments of horror, Chavez does a good job of delivering them, but there’s a plainness, a desperate mediocrity to his directorial style that never quite elevates the material. He tries to ape Wan’s electrifying camerawork and editorial flourishes, but nothing feels well thought-out or interesting, only homogeneous. As the film bustles along – it opens mid-exorcism and doesn’t really slow down – we get the sense that Wan and Johnson-McGoldrick’s story was trying to force us to follow the Warren’s work cracking the case, but to my mind the greater interest of the film lay with the possession of Arne himself, and how his claims of demonic possession played out in court. This is a far more intellectual story than some crash-boom sound-designed exorcist motifs might enjoy, and I had hoped we’d have seen a little more legalese argy-bargy in dealing with what was believed to have been the first case of its kind in the United States. I think Arne spends exactly three minutes of screen time inside a courtroom, which negates a lot of the film’s promise; instead, we dive into darkened tunnels and gloomy Massachusetts forests in search of answers. Atmospheric doom and gloom might be a sexier look in this popcorn-ready franchise, but at some point I’d have liked the Warrens to be shown having to argue the case in a court of law. In truth the case of demonic possession was thrown out by the presiding judge of the day, with Arne having to cop a plea of manslaughter instead, but I’d have loved to see the film tackle this faith-based counterargument more strongly. Hell, it’s in the title!

Patrick Wilson and Vera Farmiga are eminently capable and strong performers, and to their credit they’ve dedicated themselves to these roles across multiple films now so there must be something in it for them. Whatever that something is, isn’t character development. Despite their best efforts, neither Wilson nor Farmiga have any kind of growth as characters here, unless you count Ed Warren developing a heart condition as growth? Both are serviceable in their roles, both deliver requisite cinematic-ness to the movie, but their arcs lack connection to the main story and feel more like a bolstered secondary plotline than anything central. John Noble popping up as a retired priest is good to see, and Ruairi O’Connor has a great face and physicality for horror, but otherwise the film’s roster of characters is as bland as unsalted butter. There’s no particular standout, no instantly memorable icon of the story to give you nightmares – I remember after seeing The Nun I had dreams about that for a week! – and feels more like a made-for-TV special with a few wind machines and strobing spotlights thrown in for good measure. The Conjuring: The Devil Made Me Do It is a loudly made exorcism flick that rests comfortably on the shoulders of its two leads. Comfort does not a successful movie make, however, as it fails to reward the curious with anything more cerebral than jumpscares and the sound of bones crunching, and as a story it felt like an opportunity missed. That said, the production value on the film is excellent, the sound mix and cinematography on par with previous instalments, and Michael Chavez’ direction of this insufficient story isn’t entirely displeasing. It’s just not as strong as the rest of the core Conjuring films, and it’s here where you need to hit home run after home run. For every Annabelle or Nun movie that kinda-sorta works you need a Conjuring movie to reset the table and elevate the material. The only thing elevated here are a few of the film’s demon-possessed characters, and both of them have little to say otherwise.