Principal Cast : Havana Rose Liu, Danny Ramirez, David Rysdahl, Dale Dickey, Mila Harris, Dennis Haysbert, Benedict Wall.
Synopsis:  During a blizzard and stranded at an isolated highway rest stop in the mountains, a college student discovers a kidnapped child hidden in a car belonging to one of the people inside.

Isolation and desperation collide in Damien Power’s nasty little thriller flick No Exit, which sees a small group of ostensibly unfamiliar people stuck in a snowbound mountain shelter when a storm moves in. As with all these kinds of films, though, connections abound and plot twists circle back upon themselves, although the script is often laughably over-complex, but Power’s solid direction and some amenable performances – particularly from Danny Ramirez – turns this slow-burn genre piece into an entertaining, if forgettable, small-scale success. 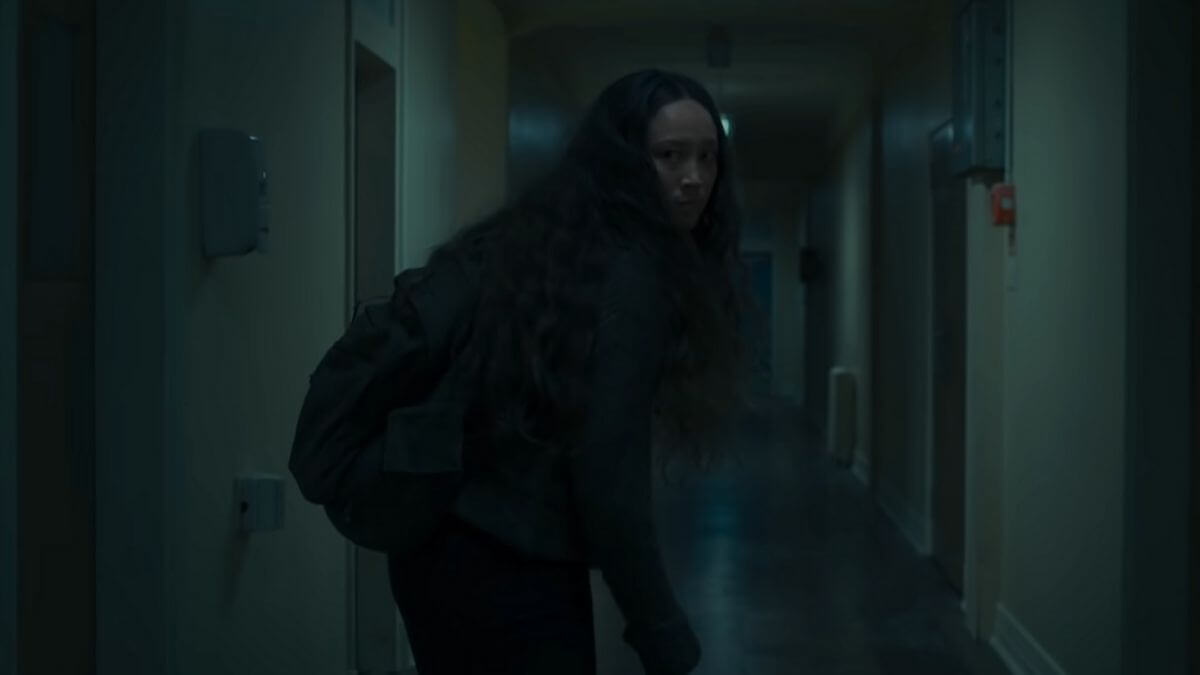 Recovering drug addict Darby Thorne (Havana Rose Liu) escapes her court-appointed rehab facility to drive to Salt Lake City, after discovering that her estranged mother is in hospital, close to death. Along the way, while crossing a mountain range, she becomes entrapped by an approaching storm, forcing her to stop at an isolated shelter high atop one of the peaks to wait it out. There, she meets a group of four people who are all also waiting for the storm to pass. A pair of brothers, Ash (Danny Ramirez) and the high-strung Lars (David Rysdahl) seem pleasant enough, while odd-couple Sandi (Dale Dickey) and Ed (Dennis Haysbert) are quiet and reserved. As they wait, Darby is shocked to discover a young girl (Mila Harris) tied up in the back of one of the parked vehicles; one of the people in the shelter is a kidnapper. With minimal communication to the outside world and time running out for the sick young girl, Darby ties to help but runs into a conspiracy that shocks her to her core, and turns her tragic journey into a battle for survival. 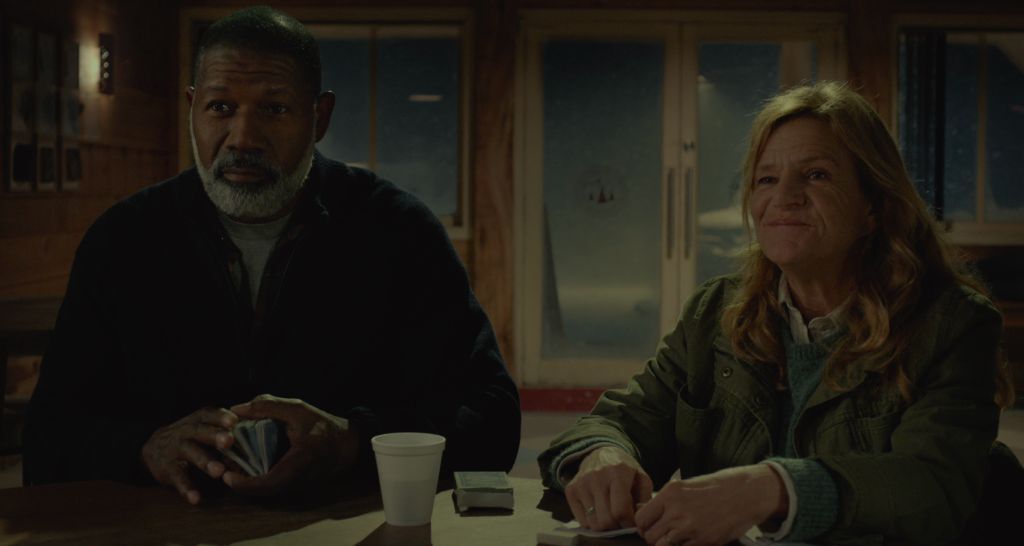 No Exit is a chamber piece that works as often as it fails. On the one hand, the premise’s dark turn is handled exquisitely well, throwing seemingly unconnected people into a close-contact situation and letting the tension simmer. The addition of a kidnapped girl is one of those “oh, shiiiiit” moments that strikes out of the blue, and the growing dread from lead actress Havana Rose Liu is played perfectly as she starts to realise that one of the people she’s essentially trapped with is a cold-stone kidnapper. Turns out, there’s more than one tenuous connection between the four others inside the shelter, and as the film’s plot progresses the revelations become more and more shocking – and infinitely more preposterous. There’s an onerous amount of inelegant complexity to the film, stretching out the “who’s a bad guy and who isn’t” question to such a degree the film becomes laughably silly as it progresses, but in terms of how it plays broad and wide for the simplicity of the narrative it offers, No Exit hits its straps fairly decently.

I was surprised to discover the film is based on a novel by Taylor Adams, and having not read it I have to assume it has a tonal similarity to the works of Stephen King – the book has plenty of rave reviews, so it’s little wonder it made the transition to feature film – which makes the suffocating tone of the movie immediately understandable. As the pressure of the narrative mounts, the bad guy’s motives are revealed, and the body count (not that there’s many) starts to mount, the film really does take on a cloying, smothering sense of fatalism, as if it’s another story in which nobody is left alive at the end. Fortunately, that isn’t the case, and I did enjoy the aesthetic and tone Powers’ direction took us into. The script isn’t particularly strong in terms of character development on the screen, and no doubt a lot of the novel’s exposition and work in this area is jettisoned in favour of a more restrained running time, I would have liked to see the Darby Thorne’s backstory fleshed out a touch more. As it stands she’s a recovering drug addict, and not a very good one, but what drove her to drugs and a downward spiral isn’t executed well enough to make me get over her bitchy attitude to others for no real reason. There is a problematic scene towards the end where Darby uses a baggie of heroin (although it could be anything, I’m not an expert on hard drugs TBH) as a kind of Roger Ramjet Proton Pill to enhance her strength and resolve in a crucial moment of recovery, and although at first it’s a moment played like some kind of superhero charge-up, there’s a distinct whiff of hypocrisy at play, with a character forced back into her own demon-spiral of addiction simply to resolve the plot. It works in the moment, but it is problematic. 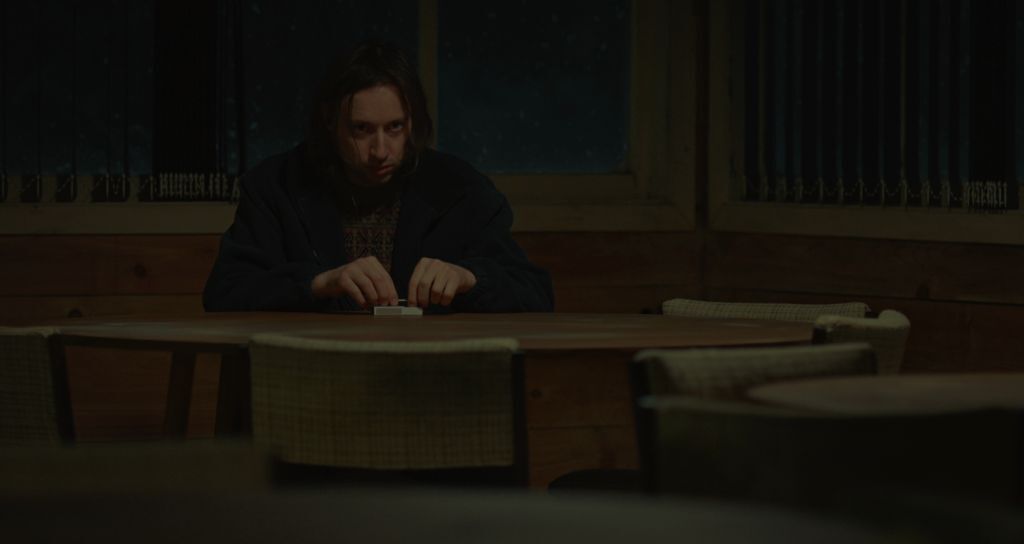 The thing about smaller films such as No Exit is that typically they cast no-name or lesser-known actors to flesh out the roles, with varying degrees of success. I have to admit that No Exit is very well cast indeed, with all of the players offering solid performances across the board, even with the most minuscule of character work afforded. Names or faces you may recognize, such as Dennis Haysbert (24, Lucifer) and Dayle Dickey (Winter’s Bone, Hell or High Water), are almost subordinate to the like of Havana Liu as Darby, or Danny Ramirez, or even David Rysdahl, whom are virtual unknowns, but subverting your B-movie expectations even the lesser lights shine here. Liu, in particular, holds her own as the resolute strong female archetype, although she’s no Ellen Ripley or Sarah Connor, while Ramirez, as the duplicitous Ash, turns from clean-cut to wild-eyed in a matter of moments as the plot twists unfold. I really had a blast watching these actors work, either by themselves or with each other, and as nonsensical as some of the story beats were, they can be proud of what they eked out of Powers’ minimalist, convoluted work. No Exit is a violent, absurd small-scale thriller, with a few decent plot twists and moments of shock. The cast are all solid, the direction is taut and very reminiscent of Robert Zemeckis or a David Fincher piece, and production value is good enough to engage the viewer throughout. While your suspension of disbelief may waver at some of the truly ludicrous reveals and surprises within, it’s an enjoyable thriller and achieves succinctly that which its lowbrow plot aspired to.