Twelve years after his first lead role in a feature film (2002’s The Scorpion King, a spin-off of his role in Steven Sommers’ The Mummy Returns), Dwayne Johnson saddles up for another action-adventure lark in Journey 2: The Mysterious Island, a sequel to 2008’s Journey To The Centre Of The Earth and a far cry from the actor’s more recent outings in Faster and Fast Five. Honing his kid-friendly beefcake appeal into solid comedic performances, Johnson teams up with returning star Josh Hutcherson (himself well known from The Hunger Games franchise, which had entered pop-culture the year before as a successful franchise itself) to once more riff on the Jules Verne and Robert Louis Stevenson classic stories with the waning popularity of 3D gimmickry to accompany it. Journey 2 is a typical mid-budget VFX adventurer, complete with daffy unearthly creatures, shriek-inducing jump-scares and  improbable scientific pseudo-nonsense, perfectly in keeping with its predecessor and perfectly matching the joyous and expeditional tone of the Verne/Stevenson stories of old, and while a lot of the “coming at ya'” shots filmed for 3D look positively stupid now (a scene in which Johnson amiably bounces some walnuts off his pectoral muscles at the camera is laughably inane), the overall feeling of fun and a good time at the movies pervades the whole thing even now. 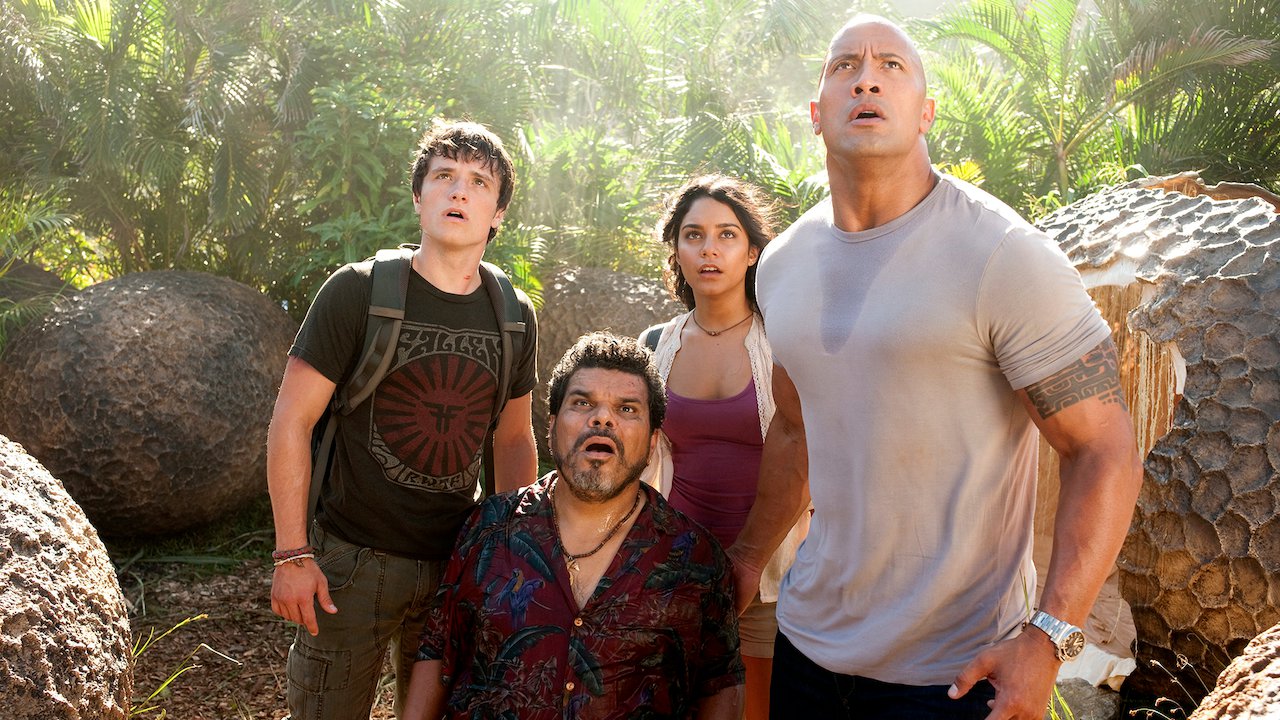 Hutcherson reprises his role of Sean Anderson, now having a fractious relationship with new stepfather Hank Parsons (Johnson) some four years following the events of the previous film. Sean is trying to locate the whereabouts of his lost grandfather, Alexander (Michael Caine), using orbiting satellites. Deciphering a set of clues left by Alexander in the tomes of Jules Verne, RL Stevenson and Jonathon Swift, Sean and Hank learn the voyage Alexander went on led him to a mysterious island in the Pacific; travelling to the nearest settlement, they engage the services of helicopter pilot Gabato (Luis Guzman) and his sassy daughter Kailani (Vanessa Hudgens), who fly them out over the ocean and into immediate trouble when a storm strikes, crashing their vehicle. They survive, only to discover they have landed upon a land in which hitherto undiscovered creatures and the pathway to the lost city of Atlantis are in abundance – as well as Alexander – and the race is on to escape the rapidly sinking landmark before they are taken by the ocean. 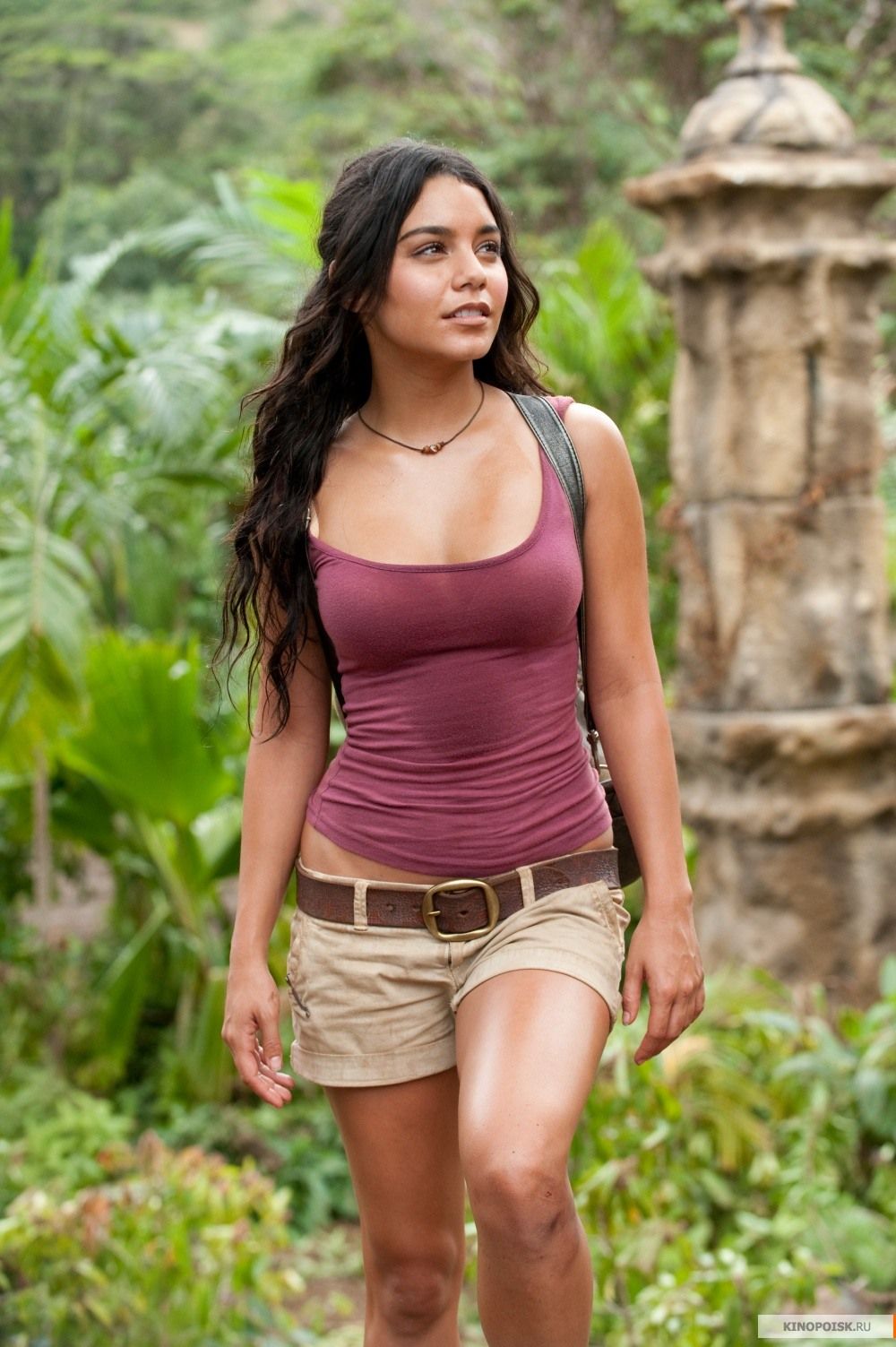 Journey 2: The Mysterious Island is nothing but fun, frothy, family-friendly adventure escapism of the highest order. It’s a perfect four-quadrant escapade in which Dwayne Johnson continues to flex his trademark physicality and sense of comedic timing, Josh Hutcherson reminds us all how underutilised in Hunger Games he was, and Vanessa Hudgens trying anything to break free of her High School Musical typecasting, all for the fun of a 3D VFX lark no doubt designed to cash-in on willing summer cinema audiences desiring to escape reality. Director Brad Peyton, who would go on to work with Johnson twice more for both San Andreas and Rampage, delivers the goods in terms of spectacle and pleasant, undemanding big-screen fun, and the film’s production design lends itself brilliantly to a mix of studio-bound set design, sumptuous location shooting, and a boatload of green-screen work that coalesces into the kind of film we wish the fourth Indiana Jones movie had been. 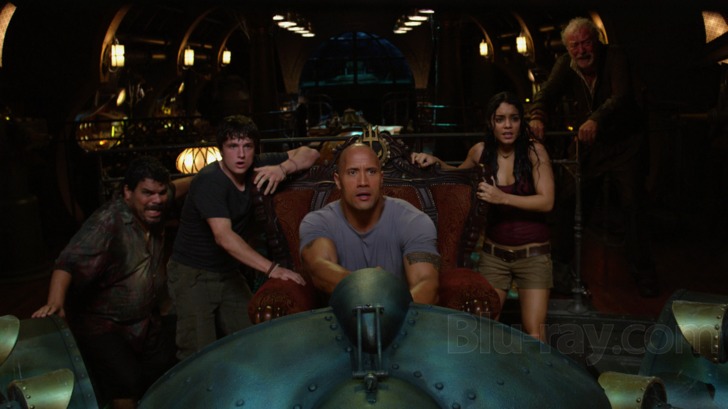 The film plays fast and loose with comedy at the expense of trying to envelop the audience in the 3D experience (for the purposes of this review, it was screened in standard 2D) and at times you kinda just need to shrug and let the silliness wash over you; expecting a film in which animalia both small, enormous, and ultimately never before seen to engage with any kind of realism is the way to abject disappointment, but I just wish Peyton and his team had spent less time with the “booyah!” 3D aspects of production and concentrated on crafting a solid film first, instead of second. It’s a minor quibble, but the relentless pursuit of gimmicky 3D shots wears out its welcome fast, leaving behind a preponderance of questionable time-wasting for the sake of a marketing tool. In terms of pure entertainment, Journey 2 hits its marks early, and maintains momentum through pacy editing, winking lead performances (particularly from both Johnson and Hudgens, who have a better grasp on the kind of semi-serious tone needed to make this material work) and well-used and highly commendable computer graphic visual effects. I mean, this isn’t Avatar-level graphics, sure, but I’ve seen far worse on bigger budget films with more discerning audiences so there’s that. 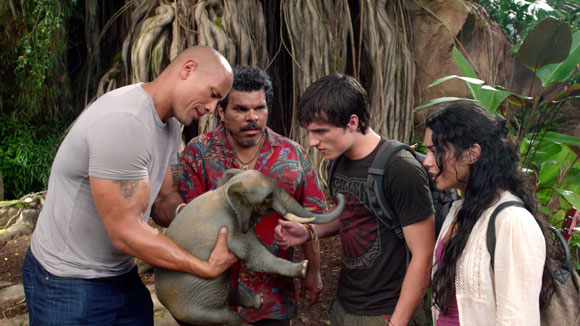 Arguably the most fun thing about Journey 2 is its accompanying musical score, by composer Andrew Lockington (Percy Jackson: Sea Of Monsters). It’s the kind of score I’d defend using the phrase “rollicking”, a pleasant mix of blasting brass and orchestrative ingenuity echoing the best of John Williams, and while I’d be struggling to hum a melody afterwards the film’s crash-and-bash action sequences are only enhanced by the work of Lockington in this. Little wonder Peyton and Lockington worked again several times, also on Rampage, Incarnate and San Andreas. The film does have a fairly bright sense of cinematography, however, a whirligig of colour both pastel and vivid, a visual theme park ride made real. This isn’t so much a criticism as it is an observation drawn from the fact that cinematographer David Tattersall, a legitimate industry heavyweight with the likes of The Green Mile, the Star Wars Prequel trilogy, Scott Derrickson’s The Day The Earth Stood Still and Adam Wingard’s Death Note to his name, gives Journey 2 such a plastic-feeling, Walmart-flavoured looking movie, and it is so dispiriting. The film feels like a 90’s video game, at least visually, with a significant effort being made to ensure not a single pixel or frame of the film is draped in any kind of darkness, and I kinda wanted it to mix things up a bit. Show us some light and shade, texture the visuals a little; instead, everything looks to have been shot in a warehouse lit by the sun. 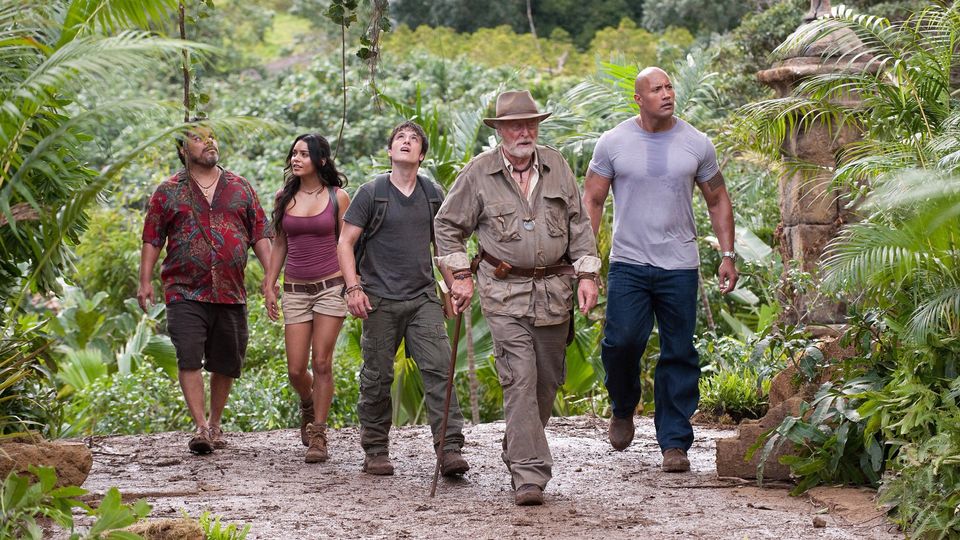 Look, if you’re after an undemanding, dramatically predictable and enthusiastically directed adventure yarn you could do far worse than this; Journey 2 is fast-paced and designed with a good time in mind, without really asking the viewer to think too hard. Johnson is solid, Hutcherson and Hudgens make a cute (if formulaic) screen couple, and Michael Caine does his best Michael Caineing, and the overall effect of the film is a satisfying VFX-heavy Jules Verne adventure snagging a bit of early Jurassic Park, a smidgen of Indiana Jones, and a swag of hodge-podge 19th century literary fantasy dragged screaming into the modern age. It might all be a bit of a nonsense but it’s a fun, funny nonsense and that’s all you should expect.