Arrrgh, the frustration. I so wanted to enjoy Lost Bullet (aka Balle perdue), the French Fast & Furious clone marketed as an all-out action assault. The trailer had me hooked, and the end result is, sadly, a gargantuan let-down. First-time feature director Guilluame Pierret’s action chops hold little promise with this lightweight, low-budget affair that’s borderline laughable and entirely forgettable, the kind of escapist-inspired lark lacking the nuance to carry itself despite low funding or the excitement or wherewithal to turn itself into even a cult mini-classic. There are moments when Lost Bullet seriously threatens to transcend to being quite the cool little thriller, but it never delivers on that promise; the low-rent locations, the lack of quality acting, piss-poor action sequences and stifling budgetary limitations prevent Lost Bullet from hitting its mark, and that forms the basis of my frustration with it. 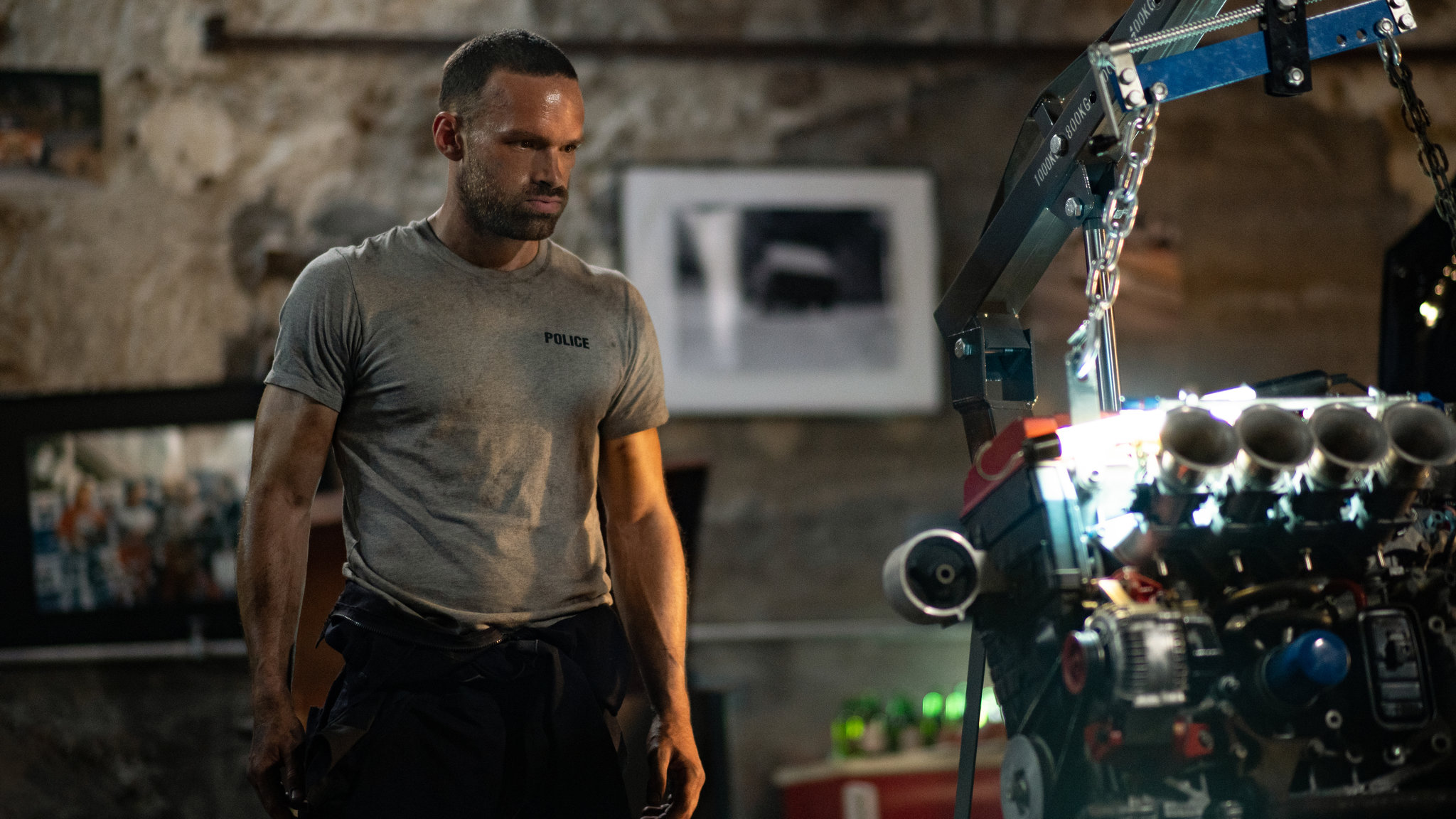 Alban Lenoir (Taken, Erased) plays Lino, a low level thief who engineers cars for crazy crimes; after being caught and spending some time in what looks like a prison gymnasium, Lino is seconded by French police detective Charas (Ramzy Bedia), who sees the recalcitrant criminal as a project to be rescued. He brings Lino into work for his specialised drug catching brigade, to engineer police cars to be able to catch the drugrunners and disable them. However, whilst on release, Lino is party to Charas’ murder at the hands of crooked fellow cop Areski (Nicolas Duvauchelle), who wants control of the brigade and will stop at nothing to achieve it. In order to prove his innocence, Lino has to locate a now missing vehicle belonging to Charas which contains the bullet the cop was shot with, and sets off to do so with the begrudging help of fellow officer (and former lover) Julia (Stefi Celma) and his former partner in crime Quentin (Rod Paradot). 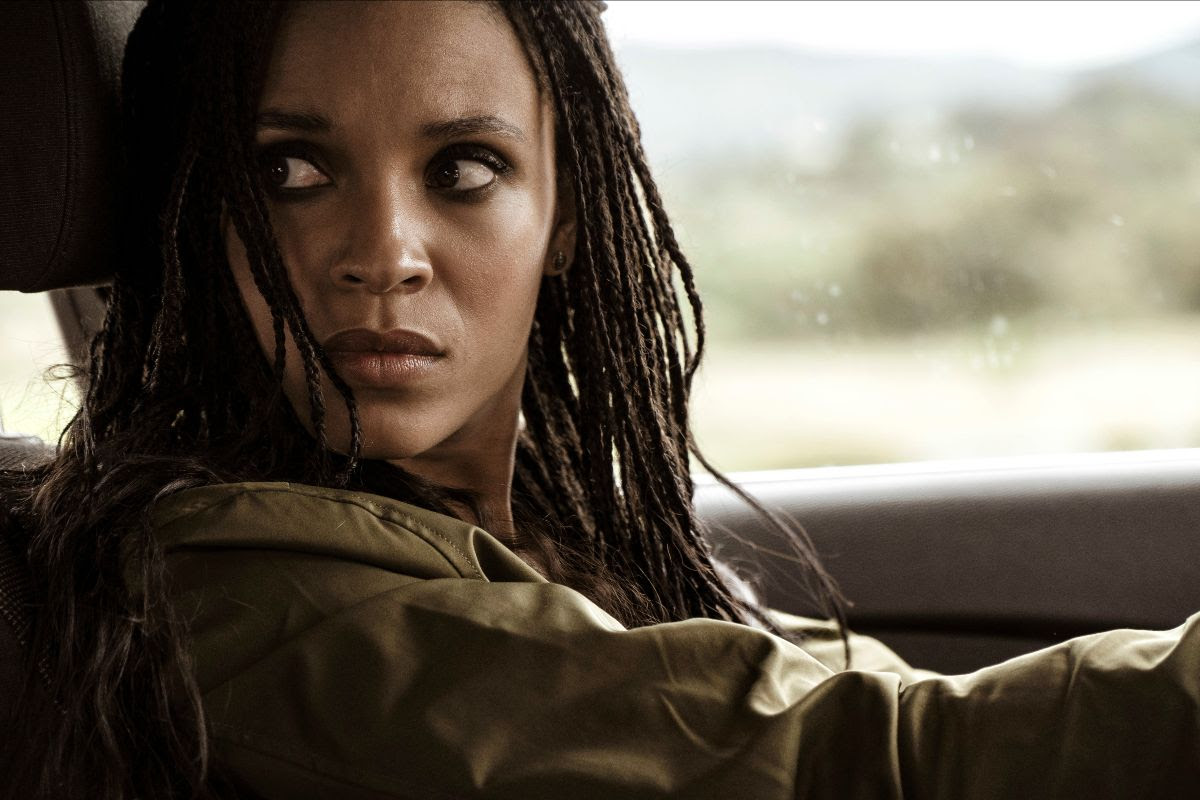 If anything, Lost Bullet is a film living within the shadow of its own potential. You can clearly see where Pierret’s film was hoping to go, what it was wanting so desperately to aspire to be, and what, given a bit more money and a grander canvas on which to paint its story, it could have been. Its crime-centric plot and punctuating violence is arguably its strongest aspect, and given it’s a film marketed as mainly as a “car chase” movie this is disappointing indeed. The director co-scripts with star Lenoir and writer Kamel Guemra to attempt to make something of a cross between Fast & Furious, The Mechanic and Jason Bourne, without either the budget or the brains to do any of it justice. 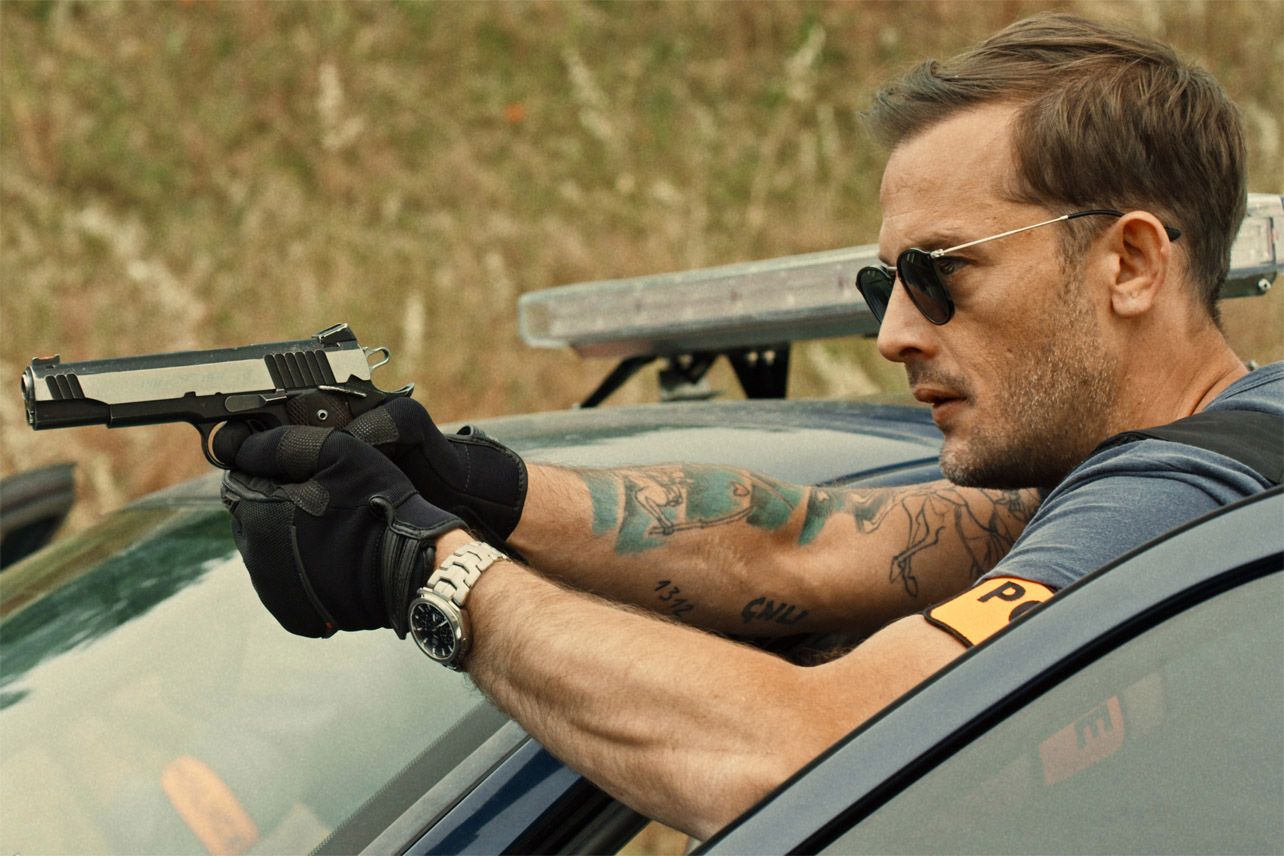 The central character, Lino, isn’t likeable in any way that makes us crave a successful outcome for him, and the plot foil of having his freedom under threat from a hopelessly narcissistic psychopath cop could be solved with a simple phone photo. The native French dialogue either doesn’t translate well into English subtitles for me, or is terrible inherently, because the material witnessed in this debacle is, and I don’t say this lightly, execrable. Lost Bullet’s muddled, gritty tone is left in deficit by some atrocious lines of dialogue, risible exposition and plot mechanics unable to scoot the plot along fast enough so we don’t notice how bad it all is. The opening “heist” sequence in which Lino and Quentin blast through a jewellery store front and out the back without a single thing to show for it made me laugh out loud legitimately, and had me amped for what was to come; this is a great little scene among very few great scenes in a film that runs on an empty tank for much of the brisk yet middling 90-minutes it hangs about. The rest of the vehicular action is pretty insipid, even for a low-grade feature like this, with chases and car wrecks producing more yawns than yippee’s as Lino winds his bloody way back to home base to prove “he didn’t dooo eeet!”. 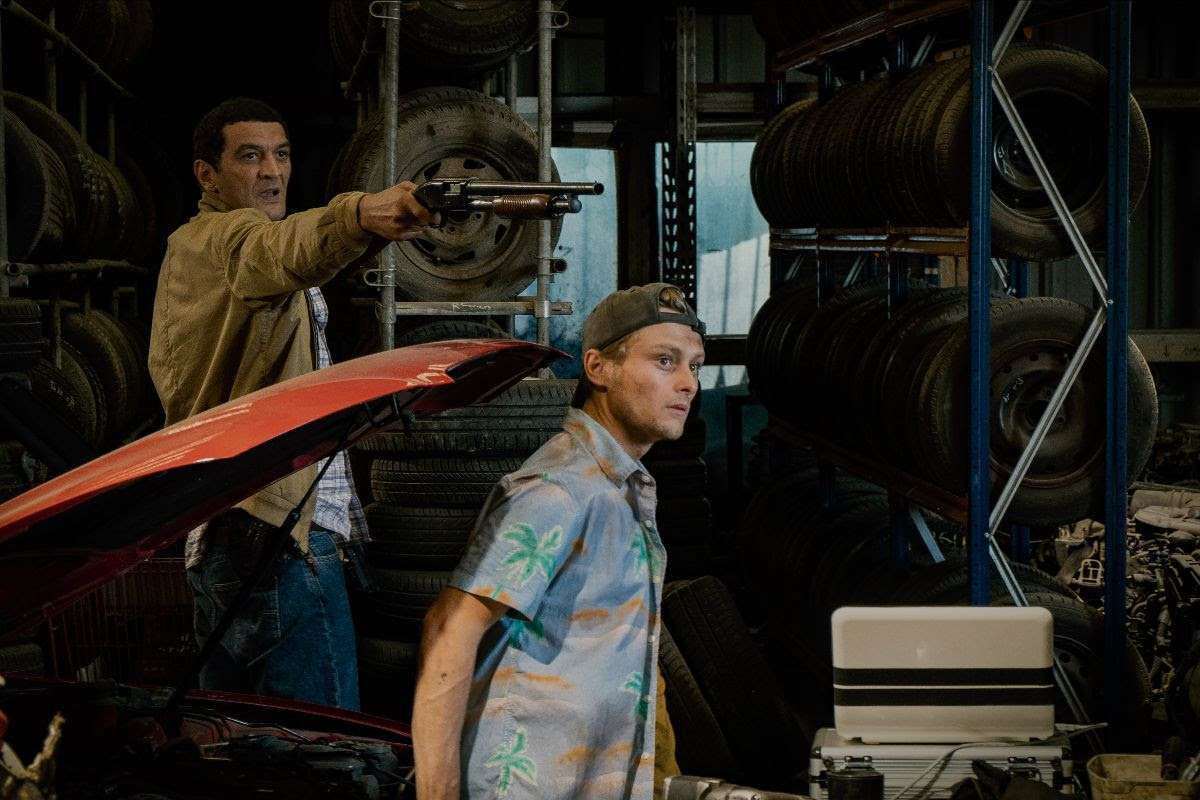 Lenoir, formerly a stuntman who obviously performed much of his own work in Lost Bullet, isn’t an actor any more than my last shit, but he gamely attempts to weave an emotional arc through this badly constructed hero’s redemption story so I guess kudos to him for having a go. Nicolas Duvauchelle isn’t awful as the film’s central antagonist, but his constant temple-flexing, teeth-gnashing campiness wore out its welcome pretty quickly, before shafting us all with the indestructible villain trope right towards the end. Remzy Bedia has a blast as the tragically short-lived Charas, whilst Rod Paradot (Standing Tall) parlays his minor role as Quentin into quite a moving momentary beat of life in this listless and out of control car crash, with prolific French actress Pascale Arbillot (The Art of Love) playing the no-nonsense commanding officer alongside Stefi Celma’s wooden and inexplicably awful role of Julia, Lino’s one-time love interest. For some reason Pierret decided to edit in a full sixty seconds worth of Celma crying in a car for some reason midway through the film, as if trying to reverse the asinine creative choices made to that point in making the character one of the worst in the movie (including the bad guy). We suddenly transition from John Woo-esque wannabe action shenanigans into a Manchester By The Sea? What a crock of shit. 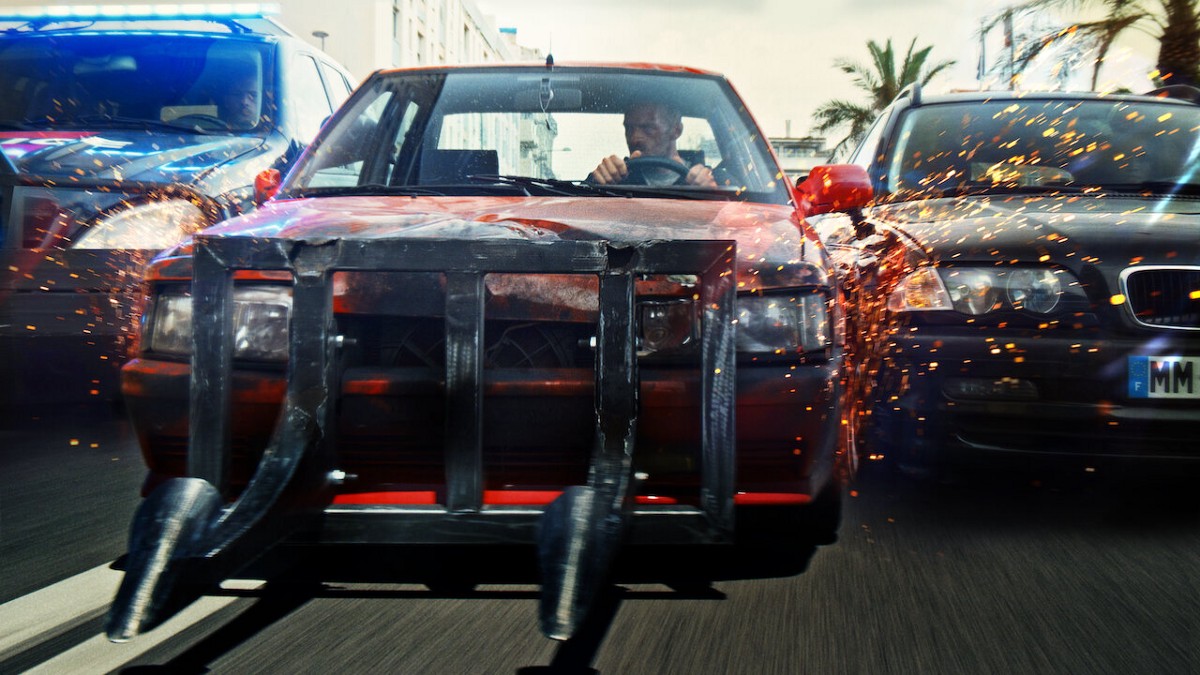 But the action; it’s bad. Not gleeful, cheerfully-cheesy bad, but entirely no-nonsense bad. Much of the film looks like it was shot in a variety of industrial backalleys and a couple of Belgian highway offramps, Lost Bullet’s budgetary constraints become all too open-wound clear once the action kicks in. The variety of cars on offer resemble a thoughtless hundred dollar second-hand dealership firesale purchase, the chases sequences lack potency or urgency thanks to middling framing and editorial choices, and the film’s pièce de résistance, a lengthy long-take police precinct hand-to-hand combat escape sequence, is borderline an assault on the intelligence of the viewer, let alone the physical wounds incurred on the screen. I get the talent working within a strict budget had to make allowances for time and money, but the performances are routinely, almost without exception, poor and the execution of the various stunts is unforgettable for all the wrong reasons. Even the climactic car chase in which Lino’s souped-up revenge wagon rips the rear axle out of a police car as it’s driving along suffers the indignity of being terrible, missing only a canned laugh track to seal the ignominy completely. 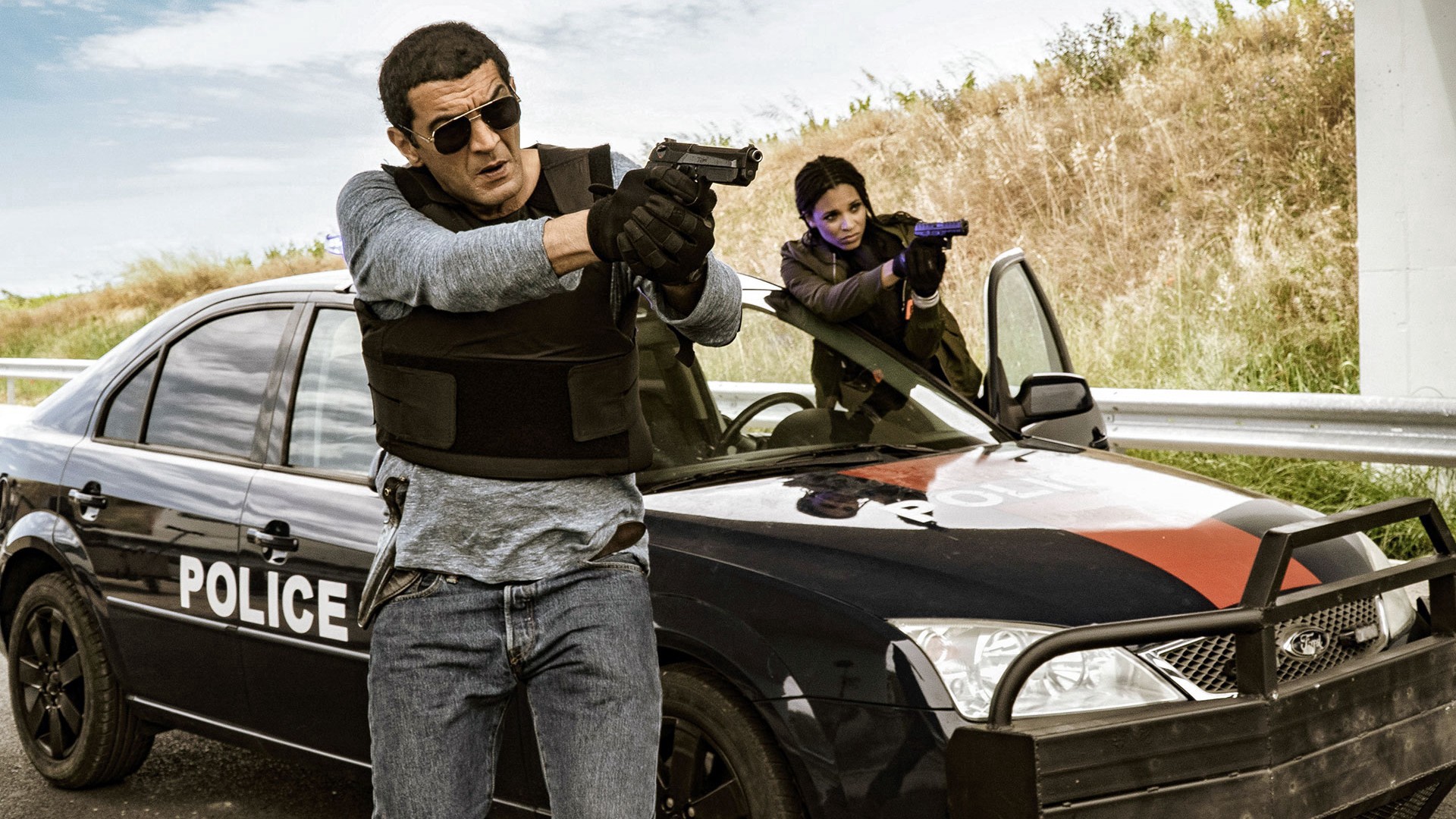 Look, I didn’t hate the film as much as this review might suggest. It has some minor redeeming features – the too-brief bloody violence is among its best assets, and Ramzy Bedia’s performance to open the film is thoroughly enjoyable and about the movie’s only real acting success – but through inept direction, shoddy storytelling via hideous dialogue, and disastrous budgetary limitations stretching credulity to, through and well beyond its limit, Lost Bullet is an absolute misfire and a meta car crash of a movie you should actively avoid.