Tom Cruise gives up the aerial antics of Top Gun and… takes to the track for this “Top Gun On Wheels” actioner from director Tony Scott and uber-producing duo Don Simpson and Jerry Bruckheimer. Days Of Thunder is pure, unadulterated 90’s schlock, with a young Cruise still mining his youthful good looks and sizzling screen charisma against a tsunami of racing and sports movie clichés and a gaggle of decent acting talent to headline this burning rubber need-for-speed classic. That I am old enough to remember seeing this in its theatrical run, and still occasionally hum melodies of Hans Zimmer’s absolutely banging soundtrack, makes my bones ache, but watching Cruise, Kidman and Duvall hamm it up in this adrenaline-junkie opus has me grinning like an idiot. 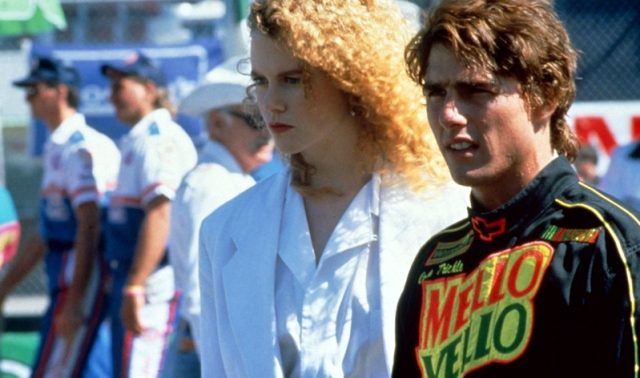 Cruise plays the inexplicably named Cole Trickle (yes, as in the pee running down your leg, Trickle), a hotshot young driver who enters the world of stock-car racing at the invitation of used car salesman Tim Daland (Randy Quaid, who gets to deliver one of cinema’s all-time great lines here) and accompanied by legendary crew chief Harry Hogge (Robert Duvall, who absolutely knows this film is beneath him but plays it for all he’s worth anyway). Trickle’s main rival is the arrogant Rowdy Burns (Michael Rooker), with the two sparring verbally off the track and physically on it. Following a spectacular wreck, Trickle meets hot young neurosurgeon Claire Lewicki (Nicole Kidman), and the two begin a relationship. However, as the mission to win the Indy 500 kicks into overdrive, Cole’s replacement, Russ Wheeler (perennial screen douchebag Carey Elwes) also crosses to the wrong side of Cole’s affiliation, resulting in an all-time great running of the iconic car race.

Plagued by production overruns due to the enormous egos of Simpson and Bruckheimer, to say nothing of screenwriter Robert Towne, Days Of Thunder’s legacy may have been less about returning studio oversight to its rightful position in filmmaking and more about giving audiences a raucous, thunderous time at the movies. It’s a film designed to be turned up loud, an obnoxiously daft, dreadfully written experience in inane hokum of the highest order, placing Cruise front-and-center in this pulp-inspired fictional sports film with over-the-top sound design and beautiful hammering Zimmer music cues. From its original budget of some $30m, the film doubled that number quicktime thanks to off-camera production antics from legendary party animal Simpson, with the film completed around four months behind schedule. It’s the exact kind of hubris and excess we love to hear about from Hollywood, from an industry famous for parties, drugs and sex, and although controversy raged around its production at the time, today one hardly raises an eyebrow.

The plot isn’t particularly new or even interesting, but it does hang together all manner of sporting tropes that manifest alongside Tom Cruise’s magnetic personality. The rookie, untested driver having to prove himself on the track, his personality clashes with a disbelieving pit crew and race officials, his near-death catharsis that sees him not only go on to beat the odds but also smash Nicole Kidman – no minor thing, let’s be honest – as his chief romantic interest, both on screen and off. While the film has become something of a minor cult classic in the Cruise oeuvre, it’s probably best remembered by my generation as the project that brought the Cruiser and Kidman together in real life. The pair would marry, make two further films together – the maligned Far & Away, and Kubrick’s final film, Eyes Wide Shut – but this one is the genesis of that union, providing a sense of illicit voyeurism that you can’t shake.

Kidman, for her part, plays the part of the incredibly hot neurosurgeon with the class of an actor who knows her career path is on the up, without a shred of indecency or ego. Robert Duvall knows the film is utter shite, but whales away in the part of the cantankerous pit crew chief who has to overcome his prejudice to get Cruise’s Cole Trickle to the finish line. But it’s Cruise’s film, and he engages with the camera and the plot/dialogue with the knowledge that if he succeeds in pulling this off it will only make him a bigger star. His rapport with Duvall, particularly, is the basis for a lot of the film’s “dramatic weight” as much as a balls-out car racing film can have any, and both actors work well together and genuinely feel like they are friends. Co-stars like Michael Rooker, who seems to act through gritted teeth as Cole’s rival, John C Reilly as a pit crewman, and Fred Dalton Thompson as the racing boss are all about the machismo and testosterone Days Of Thunder has in spades, while having Randy Quaid actually pulling off a “normal” role feels like such a refreshing change after the last few years of absolute insanity.

When the inanity of the silly script and preposterous acting starts to wear thin, at least discerning viewers have the pleasure of some terrific racing footage, dynamic editing by legendary Chris Lebenzon together with Billy Weber, and Ward Russell’s slick colour-corrected cinematography. The visual style of Days of Thunder just screams early 90’s, a look replicated throughout the decade on other Bruckheimer films like The Rock, Armageddon, Bad Boys, Crimson Tide, Con Air, Gone In 60 Seconds and Coyote Ugly – to name but a few – with loads of abundant backlighting and accentuated close-up shots working to intimidate the viewer with Cruise’s buck teeth and Kidman’s frazzle hairdo, it’s the gateway drug of choice for how Hollywood saw blockbuster films for nearly 20 years since. Tony Scott’s direction is entirely driven (pun intended) with action in mind. He flings his camera around the racing cars, the white-hot Cruise, the sexy Kidman, the cranky Duvall and all the variety of other teams, officials, racetracks, and ancillary locations in a bruising encounter with the audience that elicits chuckles, gasps and entertainment aplenty. This isn’t a film of subtlety: Hans Zimmer’s pulsating score sees to keeping you awake throughout the entire thing, electronic percussion and tortured brass mixed with the steady thrum of a pure 90’s rock guitar in a heady mix of the composer’s early work and the style he cemented as defining action movies by their soundtracks.

Days Of Thunder is crass, obnoxious and at times overbearing in trying to ensure you don’t look away. It’s trash action filmmaking at its most decadent, the kind of moviemaking driven by ego and power, rather than legitimate creative endeavour. You can see the dollar signs in everyone’s eyes thinking of box office registers ringing loud around the globe – it surprised me to learn that although the film was commercially successful in cinemas, it wasn’t the huge hit the studio had hoped it to be, particularly not when you consider the problematic cost overruns involved – and the production-by-committee feeling seeps from the lens and screenplay across the entirety of the movie. This doesn’t make Days Of Thunder bad, but it does colour the film differently with hindsight. In fact, Days Of Thunder is enormously entertaining, a generous helping of escapist cinema shouldered by a young Tom Cruise and an even younger Nicole Kidman (she was just 23 when she filmed this, he was 28) with lavish production value and a ballsy, uncompromising style. While it’s dumber than the tyres these guys race on, the film will entertain you as hard as it possibly can, for as long as you’re prepared to endure Tom Cruise taking things way too seriously.