Dazzling visual effects and an orgy of scantily clad, oiled up men and women can’t save this desperately laughable B-movie from director Val Guest from being an anachronistic bore; When Dinosaurs Ruled The Earth sells its premise with some truly remarkable stop-motion animal effects working as a subplot to star Victoria Vetri’s… ahem, revealing performance as a cavewoman whose life is constantly threatened by both a violent patriarchy as well as their enormous saurian co-inhabitants. Not a word of any modern language is spoken by the cast, with a script consisting of nonsense words to indicate emotion or meaning  – supposedly the language of these cave-dwellers was invented specifically for the film, not that it matters – while physicality, both in violence and love, are the dominating feature here. Vetri’s role of Sanna, the buxom blonde beauty at the heart of this derivative creature feature, is one to savour visually, with one acknowledging the actress was cast more for her looks than her ability to act. The whole film is a salacious mix of hairless lithe human bodies wrapped in barely-there leather costuming and plentiful plasticine brought to life by animator Jim Danforth, who would go on to be nominated for an Oscar in Visual Effects for his work here.

Millions of years ago, in some anachronistic time when humans and dinosaurs co-existed, a beautiful young woman, Sanna (Vetri) escapes sacrifice by her tribe. She is rescued by a handsome man, Tara (Robin Hawthorn) and is taken to Tara’s seaside dwelling tribe to live. However, another woman, Ayak (Imogen Hassall), is interested in Tara, and flies into jealousy when her man displays significant interest in the blonde interloper. After a minor brawl, Sanna flees the village but Tara pursues, intent on bringing her back. After various encounters with a multitude of dinosaurs, giant pterosaurs and other tribesmen, as well as near-death escapes from anacondas and learning to train a megalosaurus, Sanna and a now disavowed Tara are captured by their tribe again and are nearly killed before the a monstrous tsunami threatens to wipe them out. 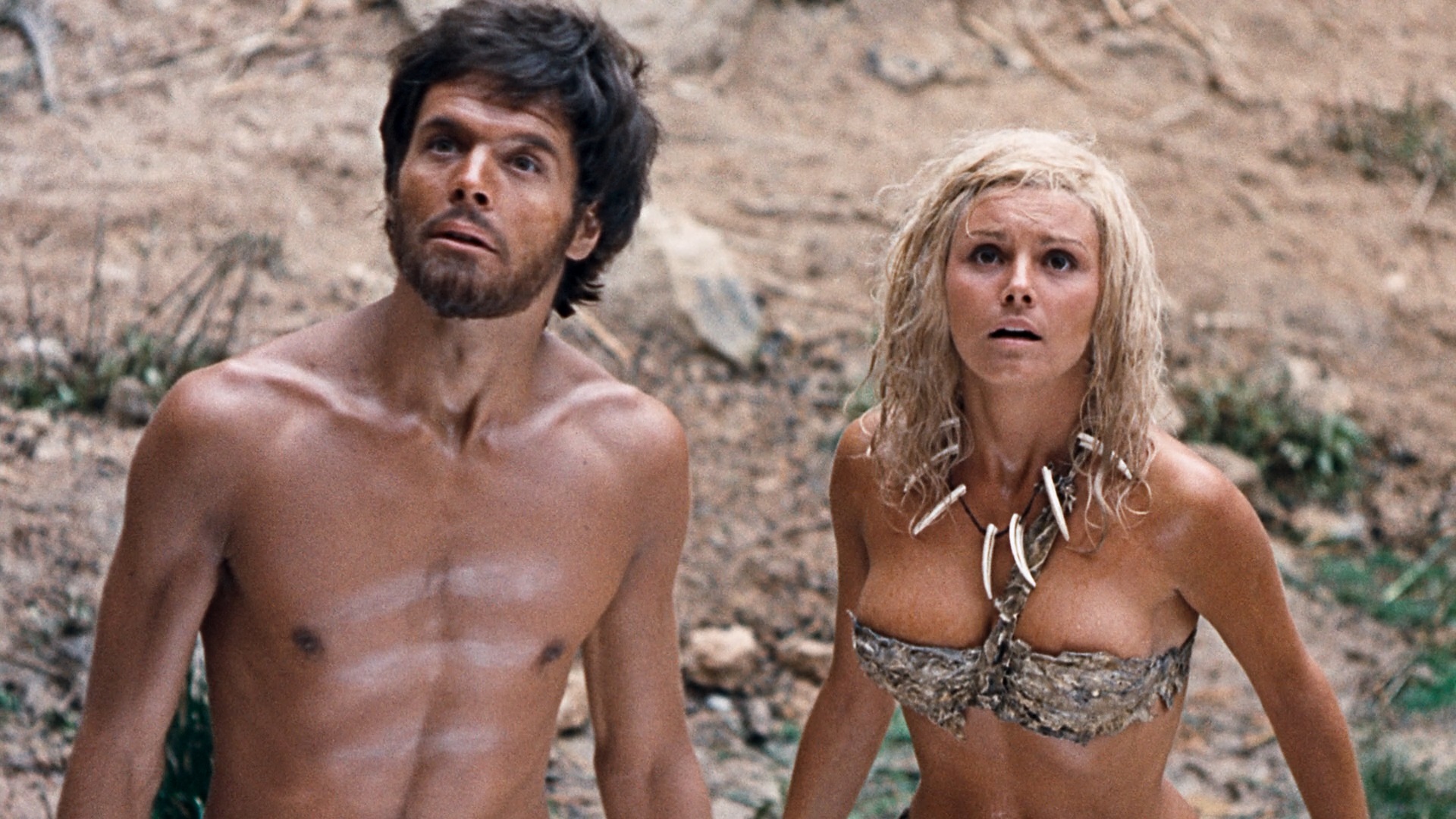 When Dinosaurs Ruled The Earth is the exact kind of blockbuster film Michael Bay would have made were he a director in the 60’s. Almost nothing about this film is subtle, from its gloriously stupid plot, its use of stunning visual effects to represent the dinosaurs featured heavily (although some sequences were pilfered directly from the 1960 Irwin Allen film The Lost World) or even its casting of multiple beautiful women wearing very little other than astutely applied baby oil. At times I felt like I was watching a precursor to Zack Snyder’s 300, with the entire cast looking like less muscular iterations of the famous solder race as they hunt, gather and escape the prehistoric landscape. The camerawork leans heavily into its exploitation roots, with many lingering, male-gaze creepy angles flaunting the lithe figures of Vetri, co-stars Imogen Hassall and Magda Konopka, and male hunks Robin Hawthorn and Sean Caffrey, even though with the exception of a couple of shots of brief nudity, the film’s sexualised content is really rather tame. It just feels lecherous, an experience in sordid adventurism behind a veil of historically inaccurate representation, and as much as I did enjoy my time with this film, I recognise that time has not been kind to it at all. 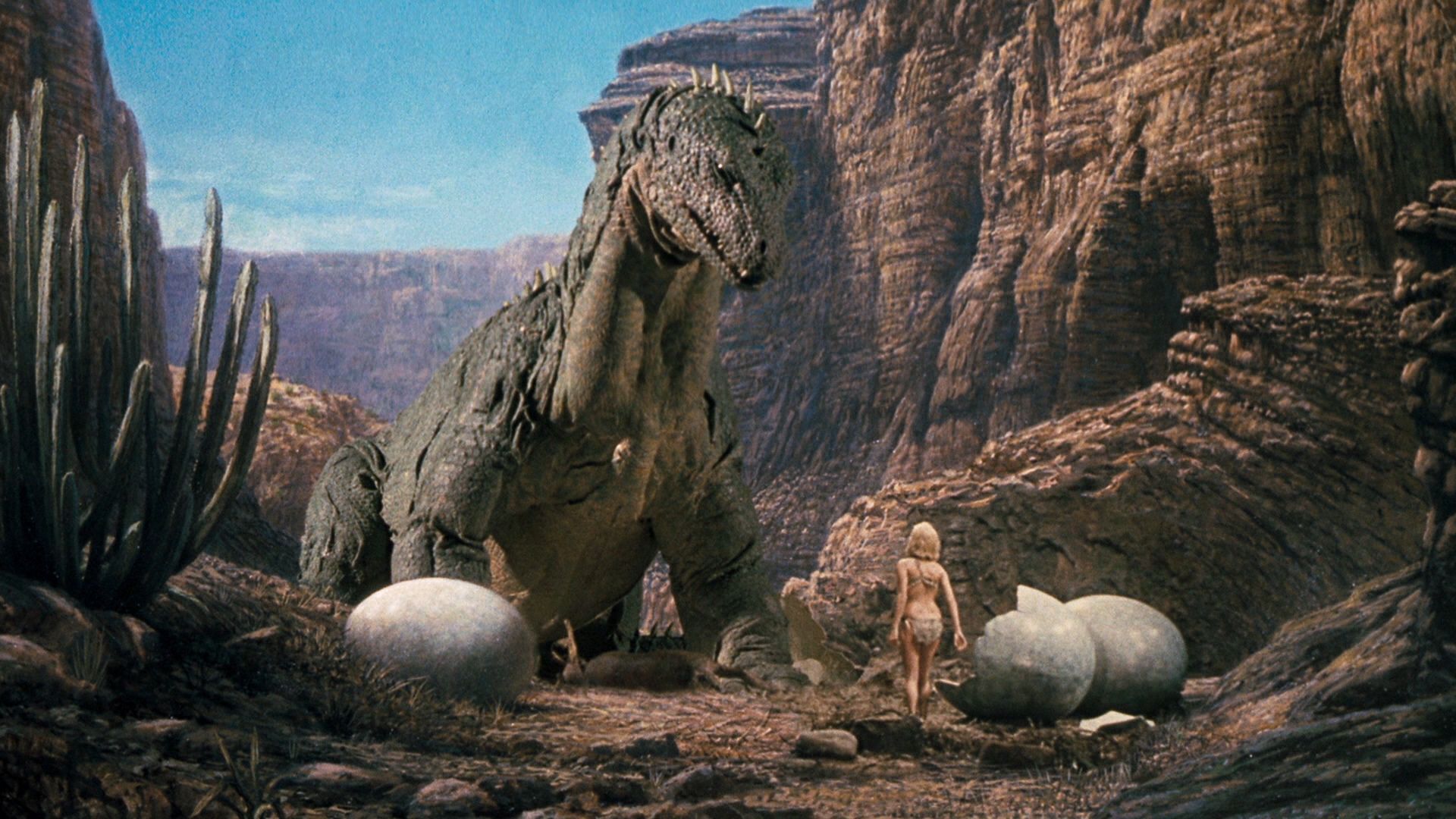 The plot meanders through a stop-start series of mini-adventures for Sanna, with escapes, near-miss deaths, jokey training a dinosaur to sit, and various manhandlings threading this lightweight survival story together with brisk, charmless ease. Vetri makes for a beautiful leading lady, and certainly draws the eye with her curves and the costume designers abject failure in creating practical outfits. How the actress managed to get through a day’s filming without injuring herself with her boobs flying all over the place I’ll never know: Vetri may have been a fine actress but the film limits her to a sexual object of lust, albeit a campy, laughably 60’s idea of femininity. Hawthorn is a solid leading man with good looks and a fine physique, but to modern audiences used to rippling abs and bulging biceps his lean, unsophisticated Tara comes over as Dad-bod Lite. The supporting cast run the gamut of hair-challenged beach bodies draped in various skimpy outfits – saving the film from being a misogynist’s wet dream is the fact that the men are objectified as much as the women, even-stevens – and to their credit endeavour to perform for the camera with as straight a face as it’s possible to have. The desire to break out in uproarious laughter at the hilarious stupidity of it all must have been strong; the film plays it all decidedly straight which doesn’t help, and the invented language dialogue – which isn’t subtitled into English or any other language, for that matter – is a clever idea that quickly becomes annoying. 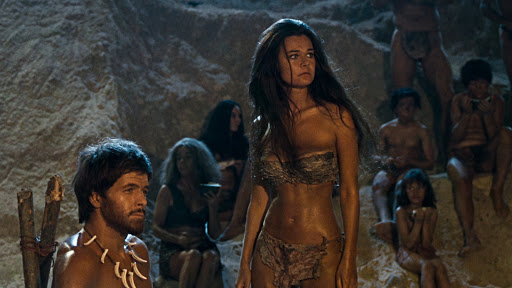 As with almost all films in which giant animals are the star attraction, far too much time is spent on stupid, inane human relationships than with showcasing the grand, jaw-dropping visual effects. When Dinosaurs Ruled The Earth doesn’t deviate from this mantra, featuring a lot of stop-motion dino action but far too infrequently to save the film’s 100 minute runtime from feeling like it drags. And it does feel a tad too long, this film, as visually dynamic as director Val Guest (The Quatermass Experiment, The Day The Earth Caught Fire) can possibly make it. To his credit his style is strong and his editing on the film is quite excellent. If the human story was stronger or had resisted the urge to play The Perils Of Penelope Pittstop with Sanna’s arc the overall result may have been stronger, but credit to him for going all-in on the dinosaur effects where he could. Jim Danforth’s practical miniatures, evoking Ray Harryhausen’s work and King Kong’s spritely tone, look positively gorgeous in high definition (the film is available on BluRay in its uncut edition) and the animation itself is smooth and tactile, holding up really really well. Danforth was also a matte painter, and worked on giving some of the film’s wide-shots an almost ethereal look here and there, and the climactic eclipse-and-tsunami sequence benefits a great deal from his efforts. 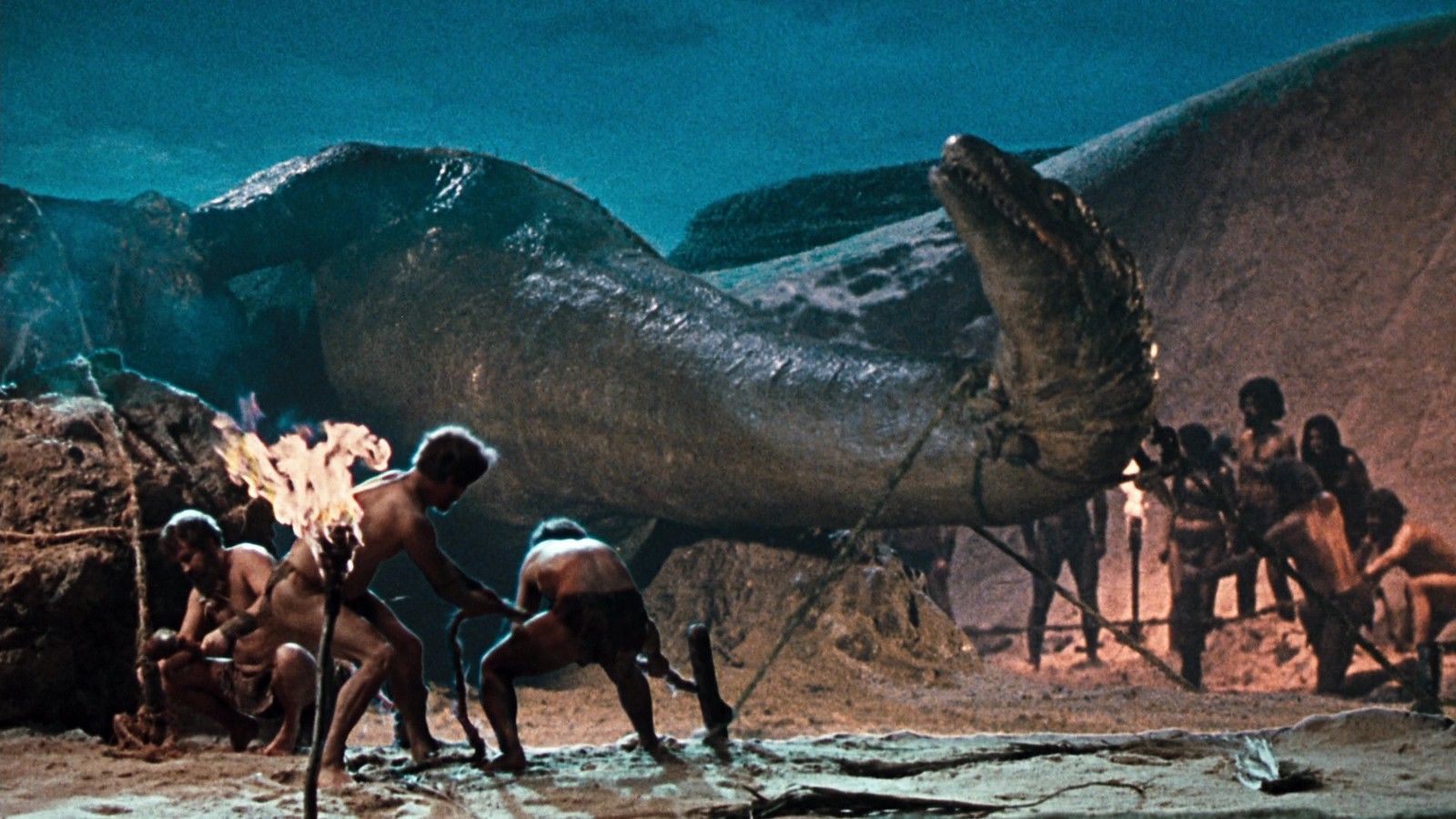 As much as I wanted to spend more time watching Victoria Vetri roll around in the dirt with her caveman accomplices, by the time the film dwells on its second half the whole thing has run completely out of puff. Having to watch a bunch of beautifully obscured actors deliver nonsense lines of grunts and semi-obscene pseudo-words while wearing next to nothing isn’t the joyride the film’s marketing material may make it out to be, with its preposterously convenient story and salacious shot selections (was this the film to invent the term “down-blouse” and turn it into an actual style of moviemaking?) the film has few redeeming factors other than our desire to laugh at all these people playing this so seriously. When Dinosaurs Ruled The Earth is anachronistic in every sense, roots its silly love-triangle framework within the terrific visual effects to my utter dismay, and captivates on only the most superficial, stupid level imaginable. It’s the Showgirls of dinosaur movies, a silly tits-and-ass debacle that’s as profoundly inane as it is intriguing.