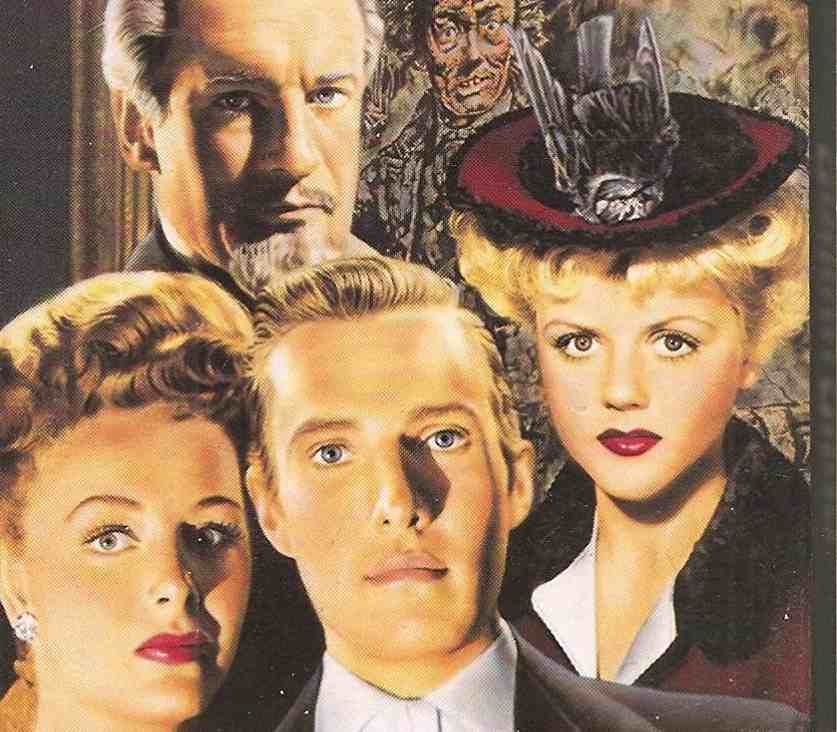 Albert Lewin’s multi-Oscar nominated 1945 film adaptation of Oscar Wilde’s hugely controversial novel “The Picture Of Dorian Gray” was – perhaps surprisingly – a box-office failure. Wilde’s story was hugely popular initially (this adaptation was about the ninth feature film to come along, while countless iterations have been made since), crowds generally stayed away from Hurd Hatfield’s charisma-free performance in the title role, even though the Academy Awards came calling for this early horror film entry, granting it a win for cinematography among nominations for Best Art Direction and Best Actress for Angela Lansbury’s tragic Sibyl Vane. The film is indeed quite stylish, a talky, persuasive chiller that almost makes up for its lack of energy with an undercurrent of palpating cruelty. The film’s chief MacGuffin arrives in the form of two momentary leaps into colour cinematography, a cool little piece of cinematic inventiveness surrounding the titular picture of Dorian, as we witness his debauched lifestyle take a toll on his soul. The metaphysical manifestation of human evil is probably the reason Wilde’s original text was brutally censored upon publication in 1890, as well as litigating his characters’ sexuality amidst abject sensuality, and although Lewin’s direction doesn’t hone in on this promiscuity of thought to such a degree, there’s an obvious subtext to a lot of the film’s shadowy, maudlin psychotropic aesthetic. 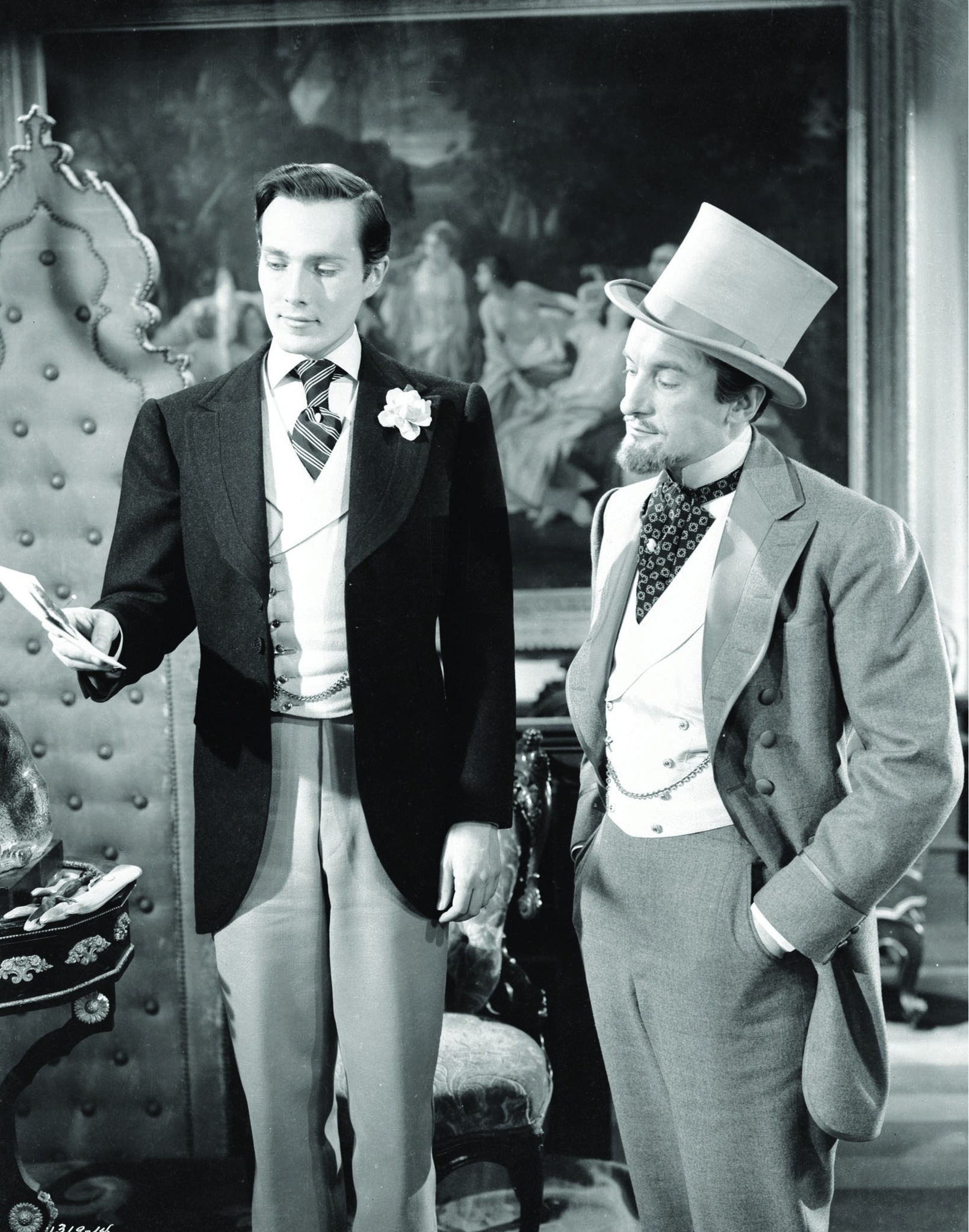 Set in the deep Victorian Era London, a wealthy young man, Dorian Gray (Hurd Hatfield) poses for a portrait by renowned artist Basil Hallward (Lowell Gillmore). A sitting is interrupted by the arrival of salacious gossip and intellectual cynic Lord Henry Wotton (George Sanders), who exposes Gray’s attitude to pleasure as one of narcissism, prompting Gray to wish that the picture may age instead of him. Doing so in the (convenient) presence of an ancient Egyptian cat statue obviously does him great harm. Life continues: Gray meets and falls for local tavern songstress Sibyl Vane (Angela Lansbury), who reciprocates despite the protestations of her brother James (Richard Fraser), but as time goes on Dorian returns to his hedonistic lifestyle and, through intentionally breaking off their engagement, causes Sybil to commit suicide. Dorian realises that although he hasn’t aged, the painting of himself – now locked high up in his mansion’s attic – has changed to reflect his own sins, a sign that his soul is falling into torment. Over the years, Dorian then meets and falls in love with Hallward’s young daughter, Gladys (Donna Reed), whom he knew as a child. Societal suspicions continue to surround Dorian as those around him grow older – eventually, lives of those close to him are lost and the ageless man must confront his own tortured soul knowing he is responsible for such evil in the world. 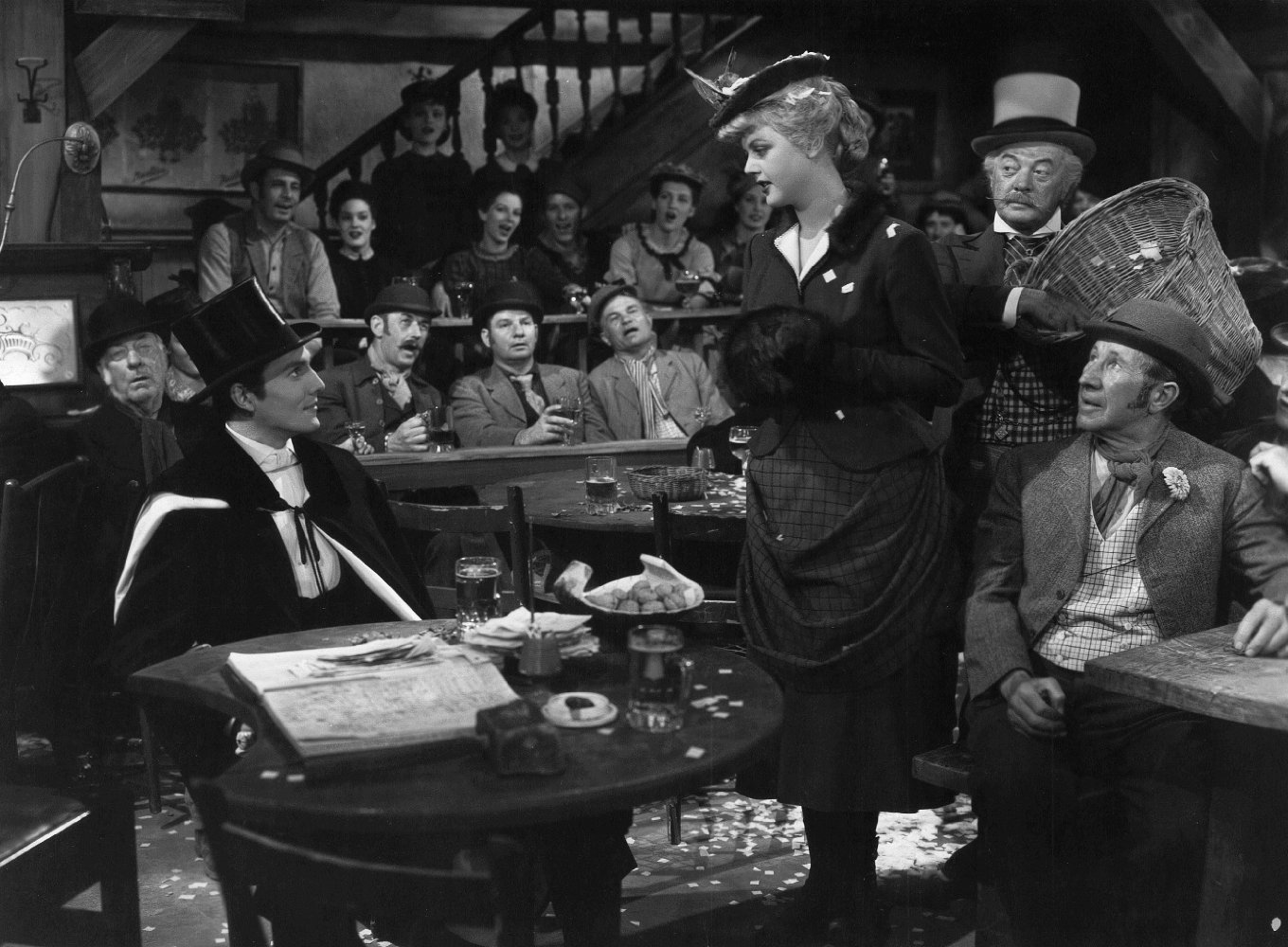 Touted as a horror film, The Picture Of Dorian Gray isn’t a monster movie or creature feature, but it does feature a man-made monster of sorts in the form of the title character. Whilst Dracula and Frankenstein bore the outer hideousness of man’s cruel and monstrous nature, Dorian Gray bears his scars internally – a far more frightening proposition, really – and it’s through this talky, indecisively unambitious attempt to bring the classic text to the screen that we bear witness to the truly ghastly downfall of a soul destined to sour through gormless decadence. Based on the Oscar Wilde text and written by director Lewin, this film version spends a great deal of its time talking about things without actually showing them. Notably, the “life of luxury” Dorian lives whilst his portrait withers in the attic is never specifically shown, only the repercussions thereof, which may have worked back in the 1940’s when the film came out but now finds limited impact with today’s audiences. The romantic angles of the film, with a terrific Angela Lansbury warbling through an early-career role (she was but only 20 when the film came out) that would garner her a second Oscar nomination (following her first, for Gaslight in 1944) and the stunning Donna Reed as Dorian’s icky kid-turned-adult liaison in the film’s second half, work the best, certainly better than the more “horror-esque” tropes espoused by the ghoulish artwork of the titular painting, but there’s a distinct lack of ability by poor Hurd Hatfield to really sell the role. 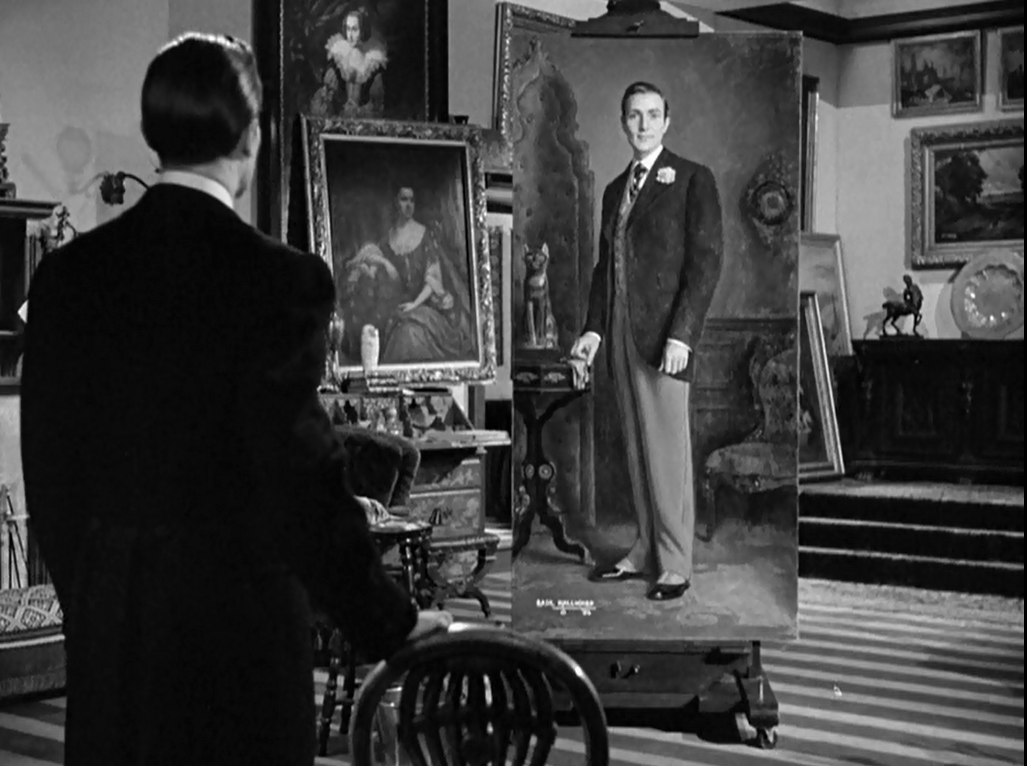 It’s not really his fault, however. The script calls for his on-screen appearances to be largely supplanted by ponderous and mellifluous voice-over narration (thanks to an uncredited Cedric Hardwicke), telling us how Dorian’s life of epicureanism is taking its toll rather than by any other specific representation. Hatfield personifies that over-dignified hoity-toity upper-class snake quite well, although his slick backed hair and constantly constipated facial expressions are often at odds with his apparent love of luxury refusing to give us a glimpse of his inner turmoil. We’re told he’s a fractured soul, it’s explained to us, but the “action” of the story and its effect on Dorian’s portrait all occurs offscreen for a large portion of the movie. Instead, he makes the world’s most insufferable leading man as he strides, glowers and pouts through the dramatic portions of the movie, only really developing a character late in the third act when the stakes start to rise exponentially. He’s just never given an opportunity to really expand his role other than the prototypically aloof “gentleman” around whom life appears to simply wash away. 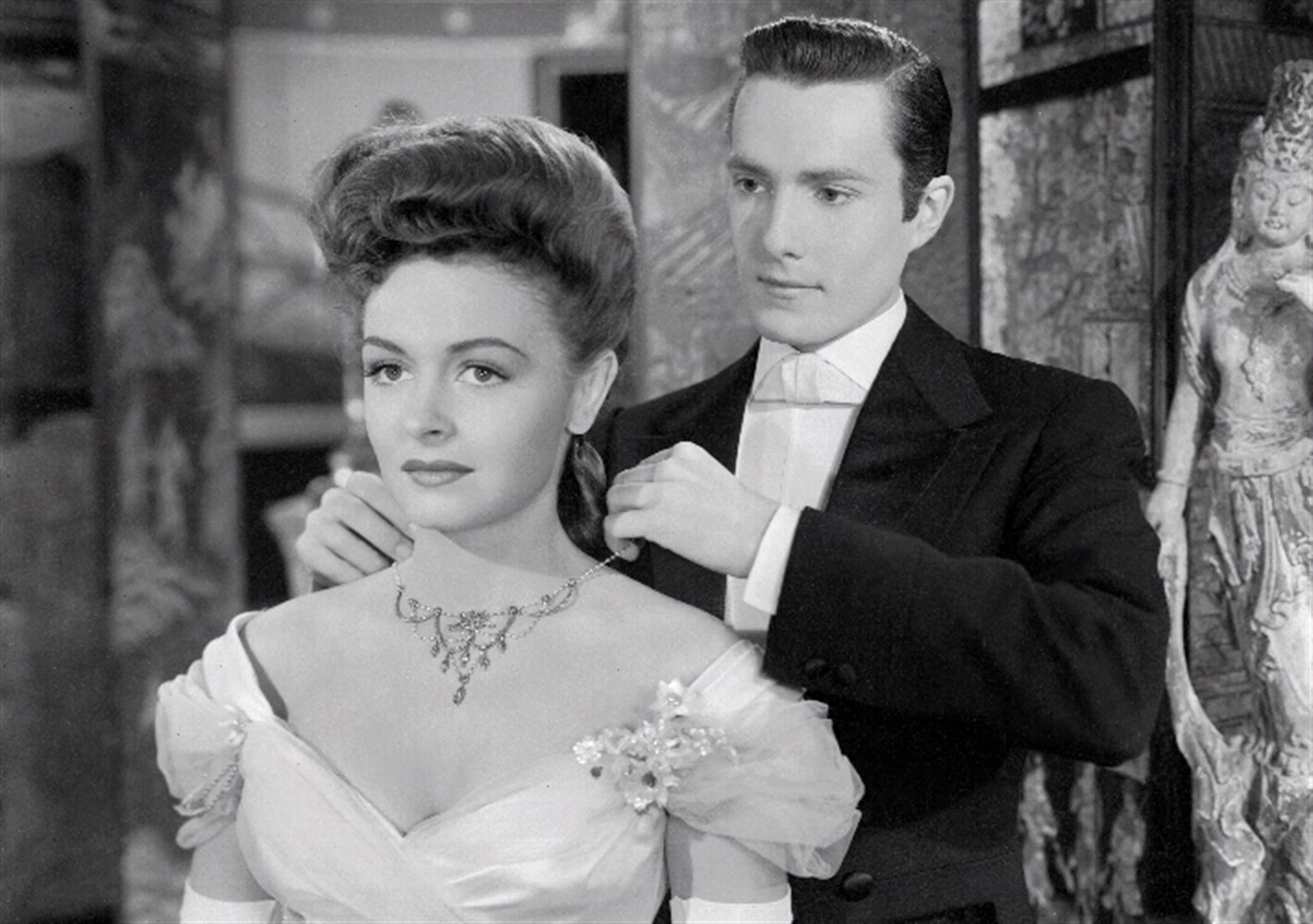 For their part, Lansbury and Reed do solid work as the romantic opposites for Dorian’s cruelty, whilst the effete George Sanders and the bullish Lowell Gillmore provide some sense of moral boundaries (both good and bad) as Dorian’s internal conflict solidifies. Lansbury in particular does excellent work, eking out a cracking Dickensian ingenue role with doe-eyed romanticism; her fate, and that of every character coming into contact with Dorian throughout, is inexorably affected to their detriment, and it’s as tragic a tale as one finds. The bit-parts to Lydia Bilbrook, as Sibyl’s mother, Richard Fraser as Sibyl’s angry young brother James, and the wonderful Peter Lawford as the friend-zoned David Stone, are just great, but never find their footing amidst the ancillary subplots this movie exhibits. 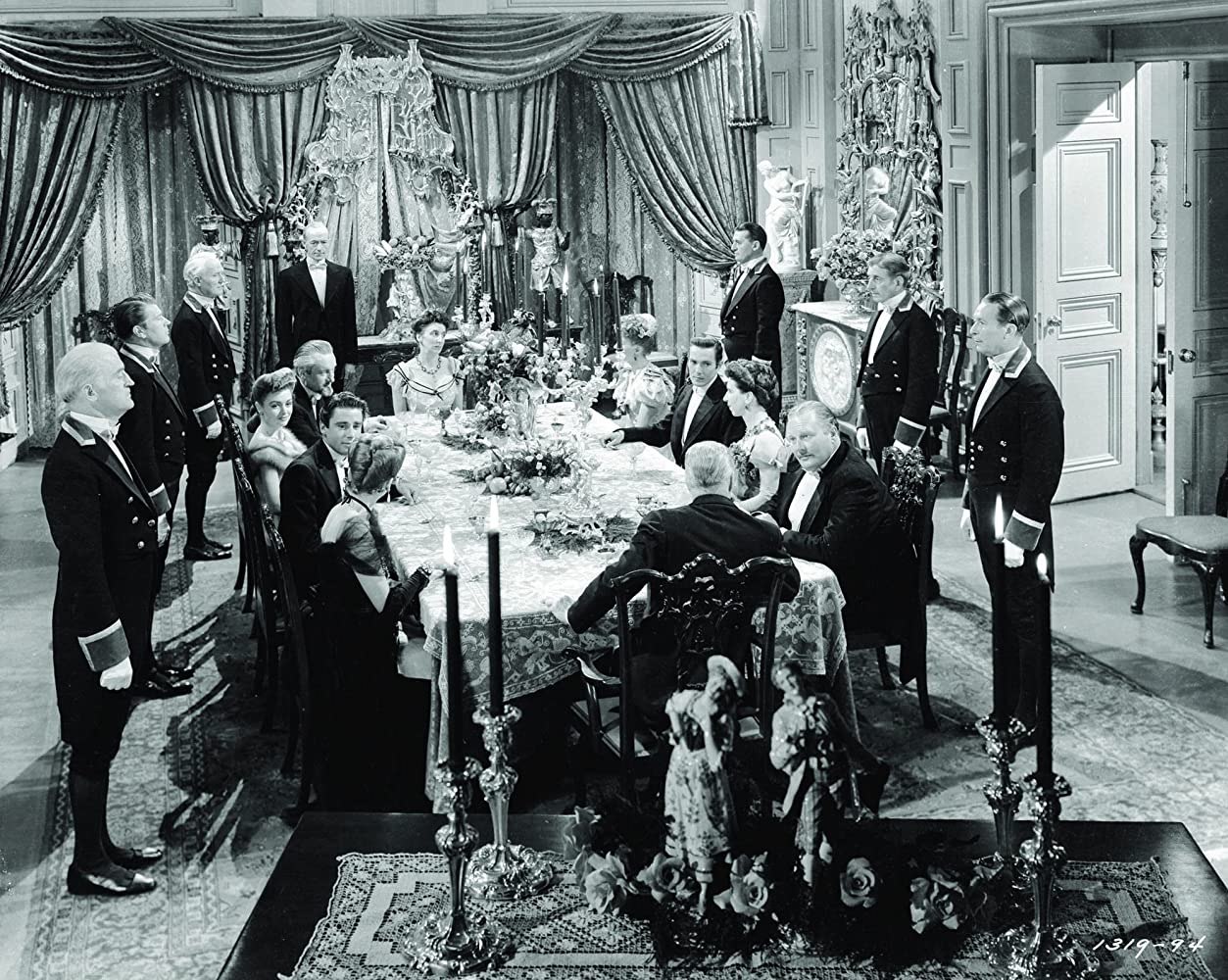 As a technical exercise, there is a lot in The Picture Of Dorian Gray to enjoy. In terms of atmosphere, the film is a delight, with its crisp black and white cinematography rightly earning an Oscar nomination as the camera prowls through fog-bound cobbled streets and slinks through ostentatious upper-class mansions. Production design, in particular that afforded to Dorian’s lavish multi-roomed London home, is exquisite, an expansive and magnificent studio set looking quite the opulent masterwork, whilst the dank streets of London’s poorer districts – mayhap akin to the Whitechapel area in which Jack The Ripper did his finest work – are shadowy and destitute, perfectly creepy areas of town in which to do evil deeds. Harry Stradling’s photography on the film is stellar – he worked with Hitchcock only a few years prior, on both Mr & Mrs Smith and Suspicion – and he finds shivering fear behind every flickering light and every swinging lampshade. Bless him, he rarely seems to use the “soft focus” affect on his female stars, allowing their natural beauty to shine through, whilst he gives Huntfield a typically full-frontal-chestedness approach to photographing him. And when he switches from monochrome to full-blown technicolour for the reveals of Dorian’s portrait periodically, showcasing the fantastic prowess of artists Henrique Medina and Ivan Le Lorraine Albright, you will quite legitimately gasp, the effect is so striking. Albright was commissioned to produce the second image of Dorian Gray for use in the film, depicting his internalised monstrous form, and the finished painting is absolutely astounding for its detail and capturing of a broken and ruined spirit, consumed by lusts and lasciviousness. Shots of both the before-and-after images were shot in colour and spliced into the film at key “reveal” moments, an effect perhaps less about artistry and more about shocking the audience with a gag. 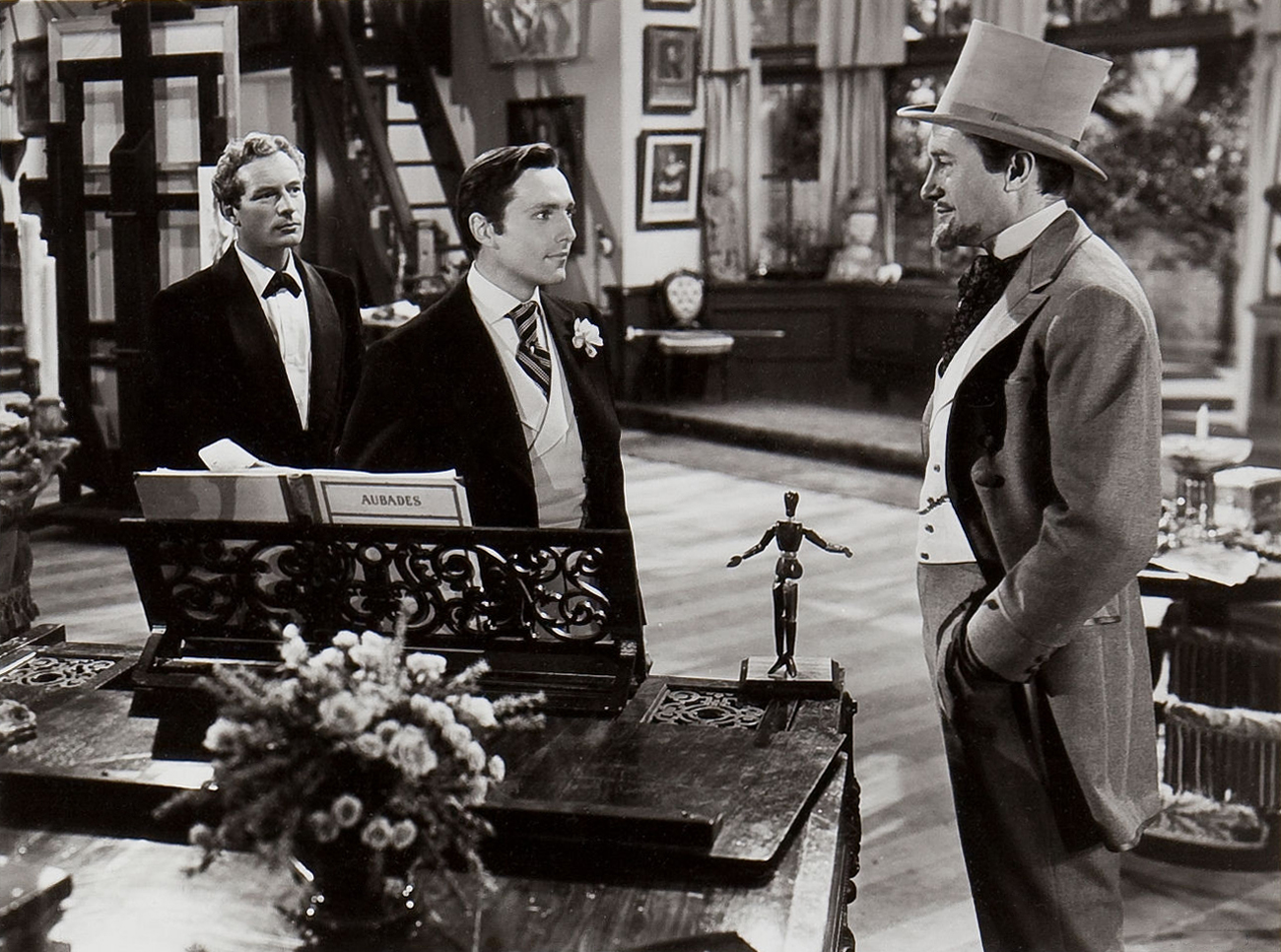 The editing in the film is a weak point, however, with Ferris Webster’s cutting a touch too obvious when hitting those horror-trope motifs. But oh, the camerawork. The panning, the dolly tracking work, the push-in and pull-back to accentuate a moment or character: the film is a marvel of angles and movement, depicting frail and contrasting psyches even when the performance of the leading man isn’t quite up to snuff. Herbert Stothard’s use of music in the film is indicative of the period, filled with strings, brass and utilising thematic material from Chopin and Beethoven mixed with original melodies. 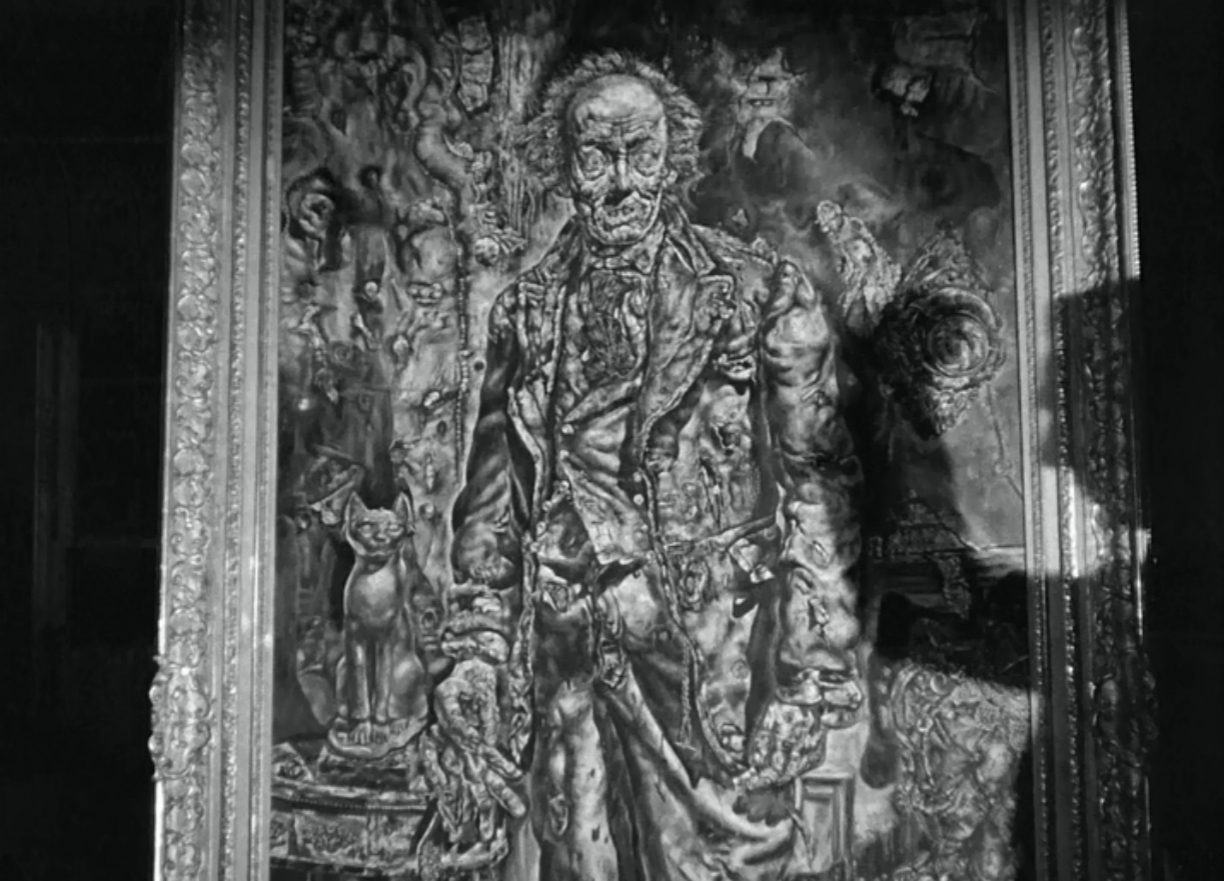 I was left quite miffed at just how inert The Picture of Dorian Gray ended up being. Although the production and technical skills more than made up for character or performance shortcomings, the end result was a film that felt like it couldn’t show us the full realisation of Oscar Wilde’s fever-dream creation, shortcutting through Dorian’s downfall and descent into madness via narration rather than action – a byproduct of the Hays Code, perhaps – and I found the going soft and listless. Lansbury and Reed aside, the more horrifying elements of the story are downplayed and too-quickly brushed over when they are present, while the romantic angles are the most satisfying aspect of the whole production. The film lurches between styles and visual flair, mixes its metaphorical subtleties and spends a lot of time trying to over-explain itself, which mitigates any momentum built by the sanguine opening act. The spiritual motifs in the movie are greatly underplayed, the moral and ethical dilemmas muddied by ostentation, and Wilde’s penchant for doublespeak and entendre isn’t given enough prominence. Sadly, The Picture Of Dorian Gray is a mixed bag of semi-effective genre tropes and beguiling supporting performances surrounding a leading man who, whilst handsome and physically suitable for the part, isn’t given the latitude to bring the role successfully to life.