Okay. Okay okay okay. I don’t know where to start. 2021’s Wrong Turn reboot is, in a word, shit. Not only starring characters who make the world’s worst decisions (even for a horror film, the kids in this one are capital-D dumb), Wrong Turn also features an astonishingly long list of plot points one could describe as “convenient”. Obtuse beyond belief, the film is a venomous modern horror that makes few good decisions in its bloodthirsty desire to create a nightmarish hell for its unsatisfying cast of youthful victims, while subjecting Matthew Modine to the anguished father searching for his lost daughter in what passes for an honest emotional connecting in these movies. I get it; the Wrong Turn franchise was never meant to be intelligent or even good, honest escapist fare – the original film and at least the first sequel were passably decent for blood, gore and cheap scares around a silly premise – but the cheap shots this effort takes in offing its cast and subjecting them to all manner of horrors right out of a Neil Marshall story is unconvincing and interminably moronic. 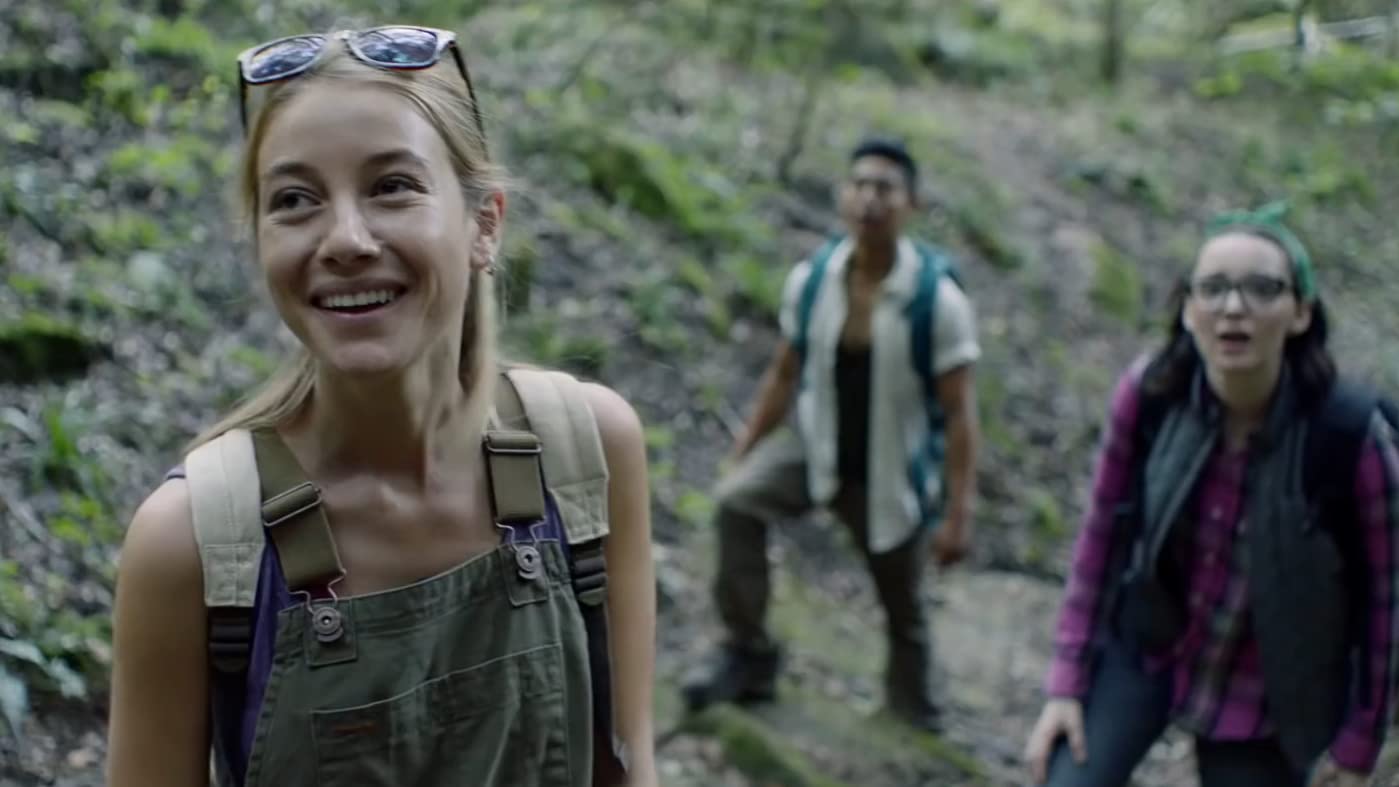 A group of friends,  Jennifer Shaw (Charlotte Vega), her boyfriend Darius (Adian Bradley), friend Milla (Emma Dumont) and her boyfriend Adam (Dylan McTee), and the quartet’s token gay couple friends Luis (Adrian Favela) and Gary (Vardaan Arora) set off into the wilderness of the Appalachian Trail, an enormous trans-American hiking trail through the Eastern United States. Along the way, they encounter a variety of deadly bobby-traps hidden on the side of a mountain, which leaves several of them dead, and a few of them, including Jennifer and Darius, captured by a group of pre-industrial isolationists living in secret deep in the forest. The leader, Venable (Bill Sage) inducts them into the cult through an act of violence, and the pair spend the next few months living there under sufferance. Weeks later, Jennifer’s father, Scott (Matthew Modine), arrives at the nearby town in search of his missing daughter, where a local innkeeper hints at her fate causing him to head up the mountain to rescue her. 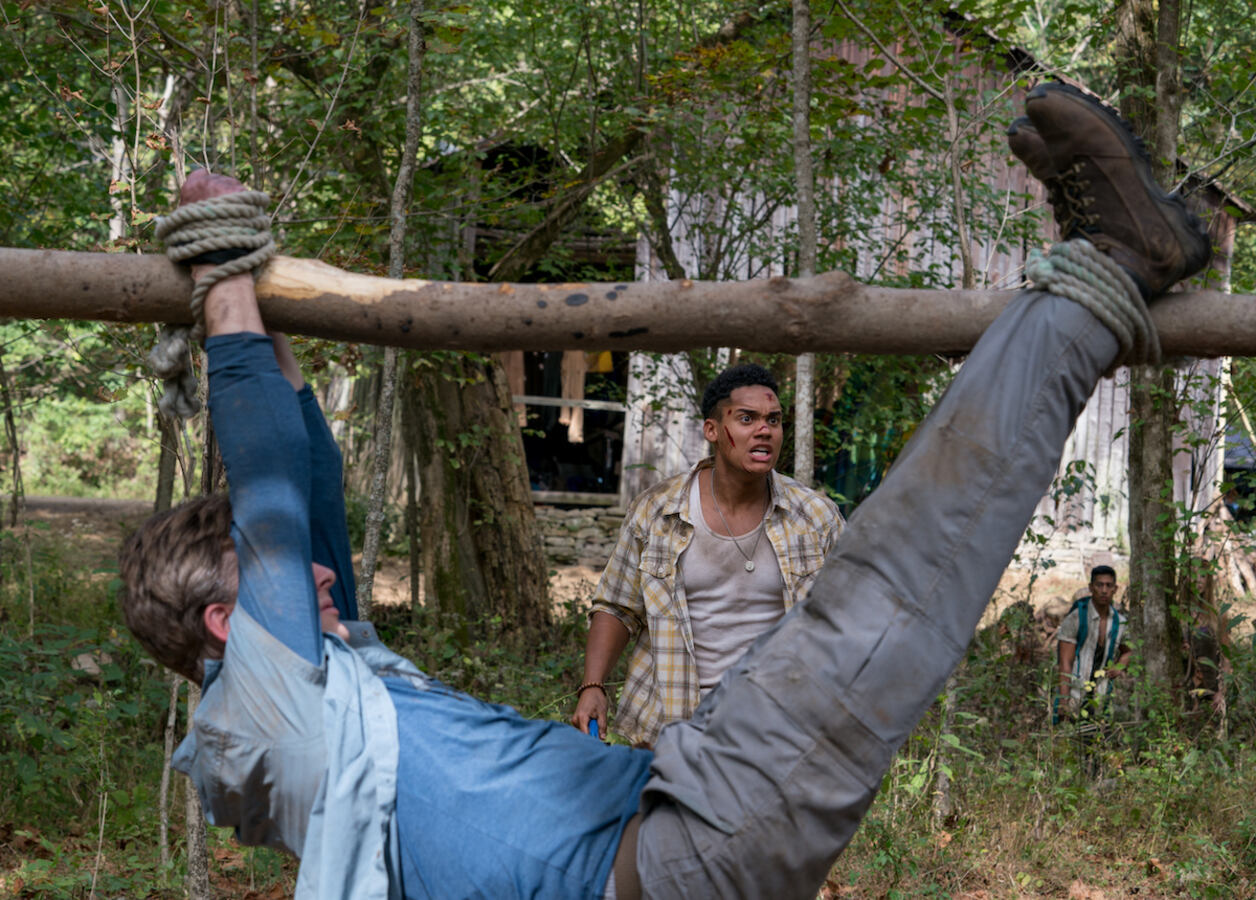 I admit I gave up watching the increasingly banal Wrong Turn franchise after about the third sequel. The Eliza Dushku-led original was a nasty little classic that delivered exactly what it said on the box, but as with most ongoing horror franchises the subsequent sequels didn’t just suck the well dry they filled it in with dirt and compacted shit. The 2021 reboot taps into that “young defenceless kids in the wilderness against creepy people behind the trees” horror motif with a visual style that works, a gritty, comparatively light-on-gore sensibility that, in any other film, might have overachieved. Under the direction of Mike Nelson, from a screenplay by Alan McElroy, the latest Wrong Turn is a biblically awful litany of facile characters, egregious plot decisions and some absolutely contrived convenience that frustrates more than it terrifies. 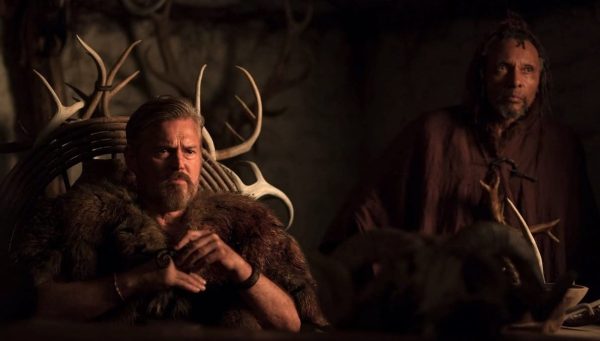 The obvious gaggle of youthful hotties, led by Charlotte Vega in a role that never quite gels, turn up to hike the wilderness trails and almost immediately make the incalculably stupid decision to go “off-route”, ostensibly to check out some old Civil War ruins hidden in the woods. Naturally, they run afoul of a set of horrifying and malicious booby-traps, set by a mysterious group of mountain people calling themselves “the Foundation” – interestingly, the subtitle to Wrong Turn was originally intended to be The Foundation before it was removed prior to release – and then the body-count starts to mount. Jennifer and her friends make increasingly stupid decisions as they start to realise their lives are in peril, and the early death sequences range from halfway good to outright unsettling, but almost without exception unsatisfying because these characters are all so awfully written and generally poorly acted. I guess I shouldn’t expect Oscar-calibre performances for a Wrong Turn film, but then you watch the writing and character development in series’ like Final Destination and in almost every instalment (particularly the early ones) you feel the characters deaths for what they are. They’re satisfying because each film earns it. Here, the young bods getting slaughtered and shattered feels generic and routine, lacking heft despite the best efforts of Nelson’s blasé camerawork and Tom Elkins’ monosyllabic editing. 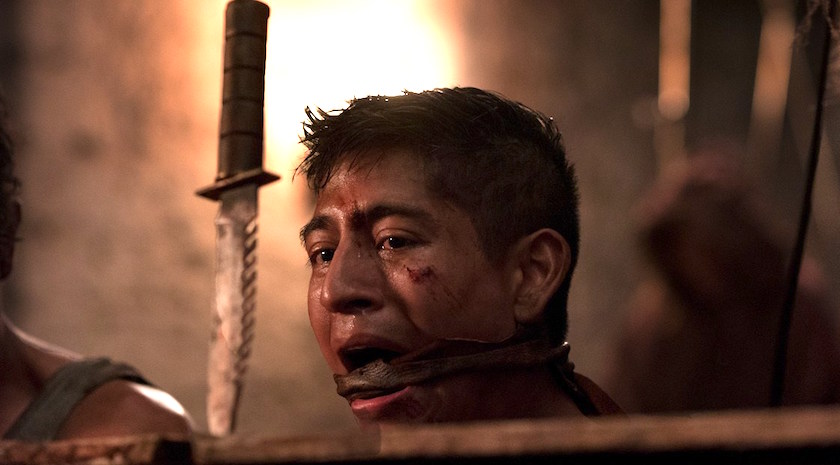 The premise of a violent cult living in isolation in the woods waiting for the downfall of America is intriguing in and of itself, but the film presents these people as some kind of society led by a corrupted sociopath for a leader and while superficially it might feel all creepy and stuff, at the end of the day the film never manages to make me give a flying shit about them. They’re cruel simply for the sake of it without mustering the gumption to go as hard as they can to be truly villainous. Humans really are the most evil of villains and the film goes a long way to try and set them up as misunderstood or genuinely hateful of society, but the intellect isn’t there to support it. Motivation is obliviated by lusty horror mechanics, none of which work well and almost all of which feel wrenched from well-worn genre tropes. 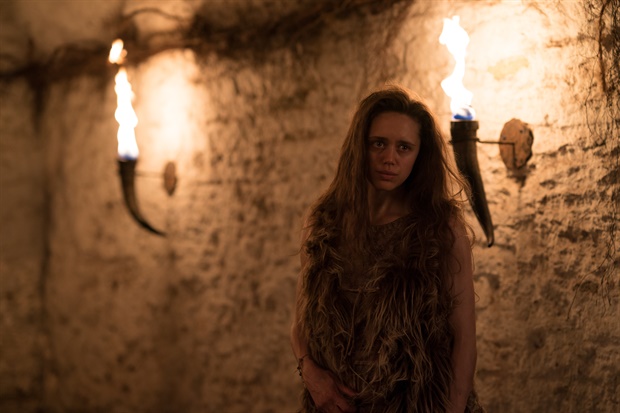 Hard as it is to quantify what the cast here do as “acting”, for the majority of the film the on-screen talent are roundly awful. Matthew Modine aside, none of them are faces I’m familiar with and there’s probably a reason for that. The excruciating “banter” between the six friends is intended to set up their idyllic social circle before it’s all torn asunder, but the blunt-force trauma horror editing, with little subtlety, prevents that from working to any tangible level. Charlotte Vega, who endeavours to personify some kind of Katniss Everdeen “phoenix from the ashes” screen heroine, lacks the ability or room in the script to develop in any meaningful way despite leading one half of the movie. Bill Sage, as the redoubtable cult leader who torments and castigates and emasculates his “family” group to the detriment of all, is evil-approximate, yet not entirely without flaw. The less said about Emma Dumont, Dylan McTee and Adain Bradley’s performances the better, too. The only person who acquits themselves well here is old-stager Modine, in patriarchal rescue mode, who essays the fraught and fragile father figure well enough to own the film’s only real redeeming emotional throughline. Sadly, though, his scenes are few and far between, and when he is on screen the chasm of talent between he and his co-stars is only the more significant. 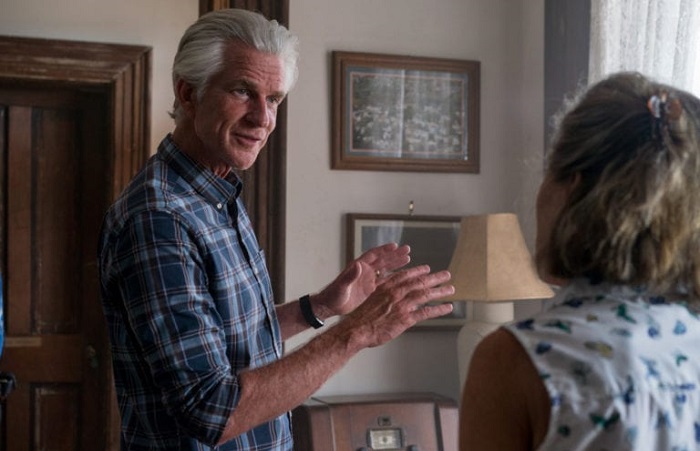 I guess it’s a problem of expectation, really. I went into Wrong Turn expecting one thing and I got another. Am I annoyed with the film for failing to live up to expectations? Not really, the film really is that bad, not just because it departs from the typical Wrong Turn hack-n-slash routine with such cognitive dissonance, but that it’s also awfully written, terribly performed, and suffers from a glaring overabundance of contrivance and convenient plotting. Kudos for attempting to subvert the norm, sure. But at the end of the day you need to satisfy the audience, and this film fails utterly to do that.