One of master director Alfred Hitchcock’s most enduring Hollywood films, 1954’s Rear Window is yet another example of his ability to create a suffocating sense of dread in the viewer as this tightly-wound thriller winds its way to a fingernail-shredding conclusion. Set in a man’s New York City apartment overlooking the multiple open windows of the courtyard around him, the film’s themes of voyeurism and our sense of intrigue in other people’s lives ring true even now with our mobile-phone-camera society, with Hollywood icon Jimmy Stewart (who somehow snags a catch as stunning as Grace Kelly? Please…) confined to a wheelchair throughout as he ungraciously badgers his friends to believe a neighbour may have committed a murder. The elegant premise preys upon our own insecurity and fascination with other peoples’ lives, with Hitch making the peeping tom a somewhat sexy, appealing, altruistic notion when, in reality, we should be utterly creeped out. 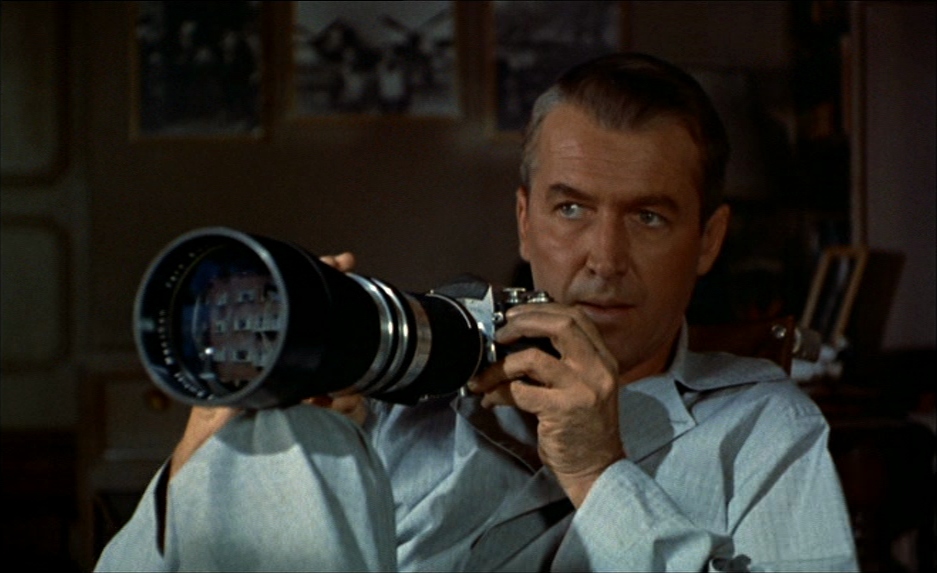 Professional photographer LB “Jeff” Jeffries (Stewart) is recuperating in his New York City apartment during a sweltering summer, his leg in a cast following an incident on a racetrack. His insurance appointed nurse, Stella (Thelma Ritter) administers his daily dose of therapy, and his young, beautiful socialite girlfriend Lisa (Grace Kelly) visits regularly to keep his spirits up. Jeff whiles away the days watching his neighbours from his back window, which conveniently overlooks a courtyard around which many other apartments also attach to. With the heat of the season forcing many to keep their windows open, he can see many of their daily lives transpire – a young dancer (Georgine Darcy) studies and flirts with many visitors, another woman suffers the indignity of not having any love in her life (Judith Evelyn), whilst a songwriter (Ross Bagdasarian) struggles with his compositional creativity. One evening, Jeff notices one neighbour, Lars Thorwald (Raymond Burr) returns home alone from a trip away, with his sickly wife (Irene Winston) now mysteriously absent. Jeff surmises that Thorwald has murdered his wife after the neighbour behaviour quite bizarrely, but neither his police detective friend (Wendell Corey) nor others believe him – initially. Eventually, curiosity gets the better of both Jeff, Lisa and even Stella, and they plan to do their own investigation of Thorwald’s apartment to see if, in fact, Mrs Thorwald did meet with foul play. 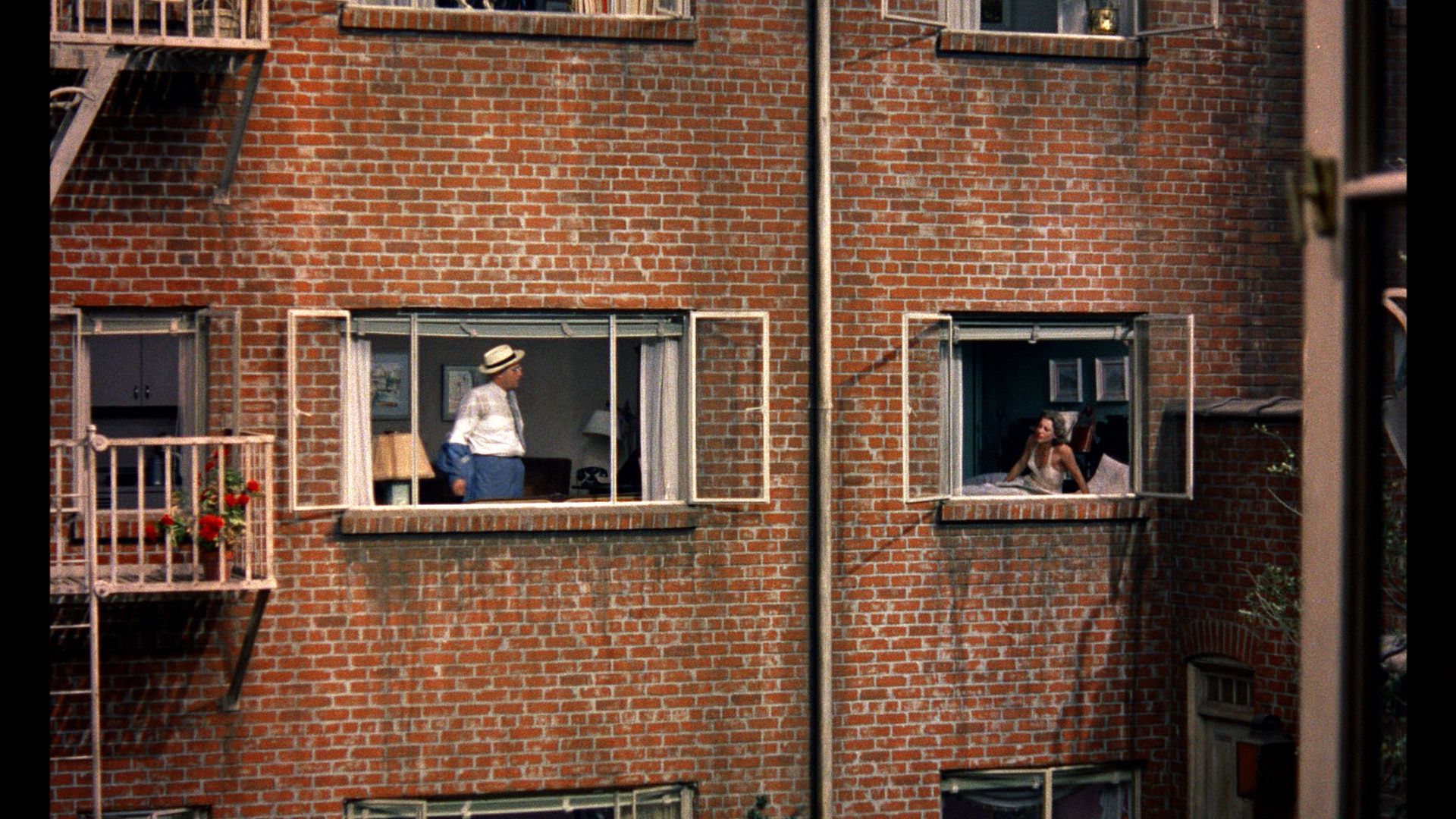 In many ways, Hitchcock’s Rear Window mirrors in many ways his earlier 1948 film Rope. Small in scale (despite having one of the largest single sets to be built on the Paramount lot at the time) and increasingly intense as the film builds, the proficiency with which the director crafts John Michael Hayes’ screenplay at both a technical and cinematic level is astonishing even with modern eyes reviewing this over half a century after it debuted. It’s a small-scope film, Rear Window, set in a single location with few, if any, vantage points that aren’t from Jimmy Stewart’s viewpoint in his apartment. His solitude, his infirmity, his apparent obliviousness to potential danger for himself, all manifest in the film’s springcoil third act, in which Thorwald’s buttons are pushed just enough to make him snap – is he, or isn’t he, a killer? – and Hitchcock’s technique once more delights in terrifying his audience with simple, effective visual motifs. Stewart’s character picks up a telephoto lens to peer closer (which, conveniently lets us peer closer too) and with the constriction of viewpoint comes external events we miss. Outside the frame we cannot see danger coming, the slowly drawing-in viewpoint similar to the manner in which Sidney Lumet’s 12 Angry Men achieves a similar feeling of claustrophobia, and it’s through this confined and dangerously limited viewpoint that the story unfolds so well. 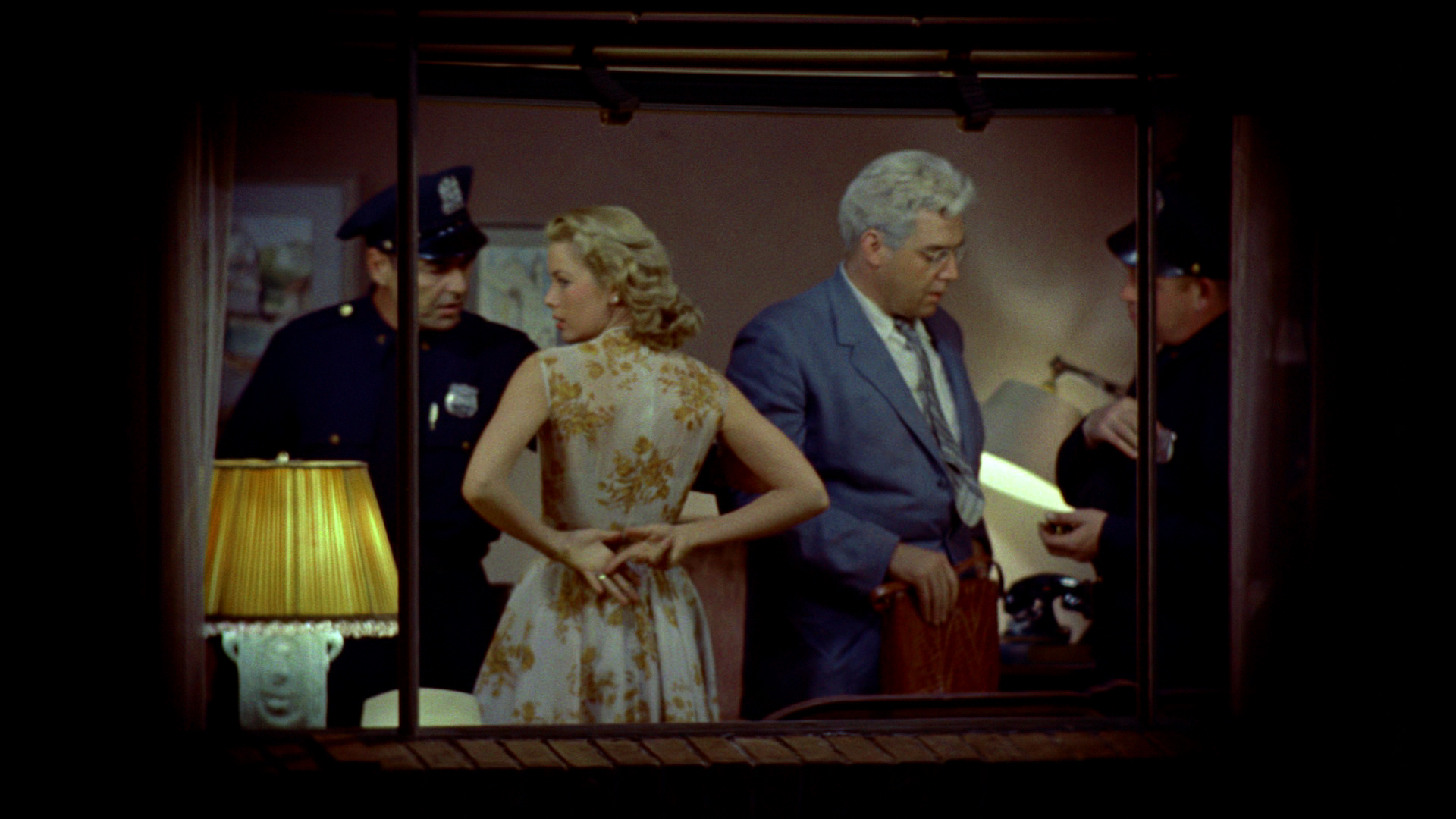 As with most Hitchcock films, Rear Window starts off quite calmly, relatively urbane, with Jeff’s sequestration in his apartment something of a chore, a painfully boring experience that’s only heightening his belief that his younger girlfriend is ill-suited to his devil-may-care lifestyle and maybe he’s better off if she wasn’t around to disappoint. Stewart, who was 46 at the time Rear Window was made (compared to Grace Kelly, who was 25 when the film premiered) is once again the Great Everyman, a valiant screen hero who despite his flaws is resolute enough and ethical enough to do the right thing even when everyone thinks he’s a touch crazy. The actor seems to be able to parlay his terrific screen chemistry into a character you can believe in and come to admire, as he does with almost every role he ever played, and his frustration, exasperation and eventual euphoric relief takes us on a ride along with him. Grace Kelly, for her part, is simply luminous in her role of the dutiful, loving girlfriend, although it’s hard to work out if she’s truly in love with Jeff or just a bit smitten – puppy love, if you will – although her commitment to Jeff’s exhortations about Thorwald is exemplary. Kelly is beautiful, a delightful leading lady and arguably one of the most lustrous of all Hitch’s blonde bombshells, but she can also actually act, the same of which cannot always be said for the director’s other choices at times. 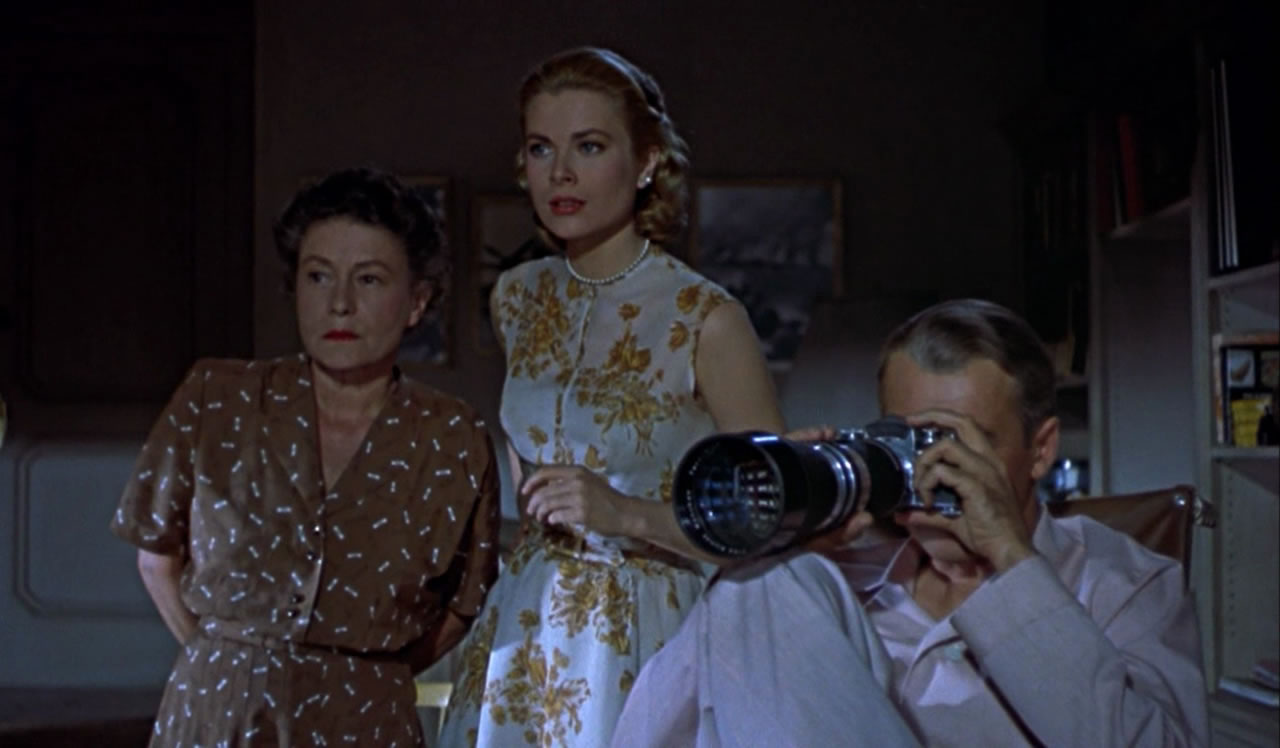 One of the most awe-inspiring aspects of the film is, at least for my old-school filmmaking brain, the gorgeous functional set of a New York City apartment complex inside a Hollywood studio; it’s a fascinating design of nooks, crannys and a surprising number of open windows, which also brings about consideration for the film’s most hard-to-suspend-my-disbelief element, that of all this film’s goings-on occurring to the wide open view of anyone who happens to look outside. I admit I did struggle to understand how so many of the people in this film always, always had their blinds open or the windows thrown wide every single day (and most nights), so if there’s an element to the film’s shorthand to giggle at it’s this, but once you get past it the film is an intense and enjoyable ride. The multi-level elements at play here, with Hitch’s camera sweeping from one window to the next as Jeff surveys his immediate neighbourhood and its inhabitants, provides singular angles for our voyeurism, with characters often obscured or absent entirely from our field of vision. The nature of this sense of unintended intimacy is among the film’s strongest thematic elements, a ratchet tension that releases only in the film’s climactic confrontation sequence at the end. As Thorwald realises Jeff is the one who has pointed the finger of blame at him, he sits, calmly smoking a cigar in the dark, the red-hot end of which glows in the shadows with one of the film’s starkest menacing moments that sent a genuine shiver up my spine. I’m on to you, neighbour. I’m coming for you. 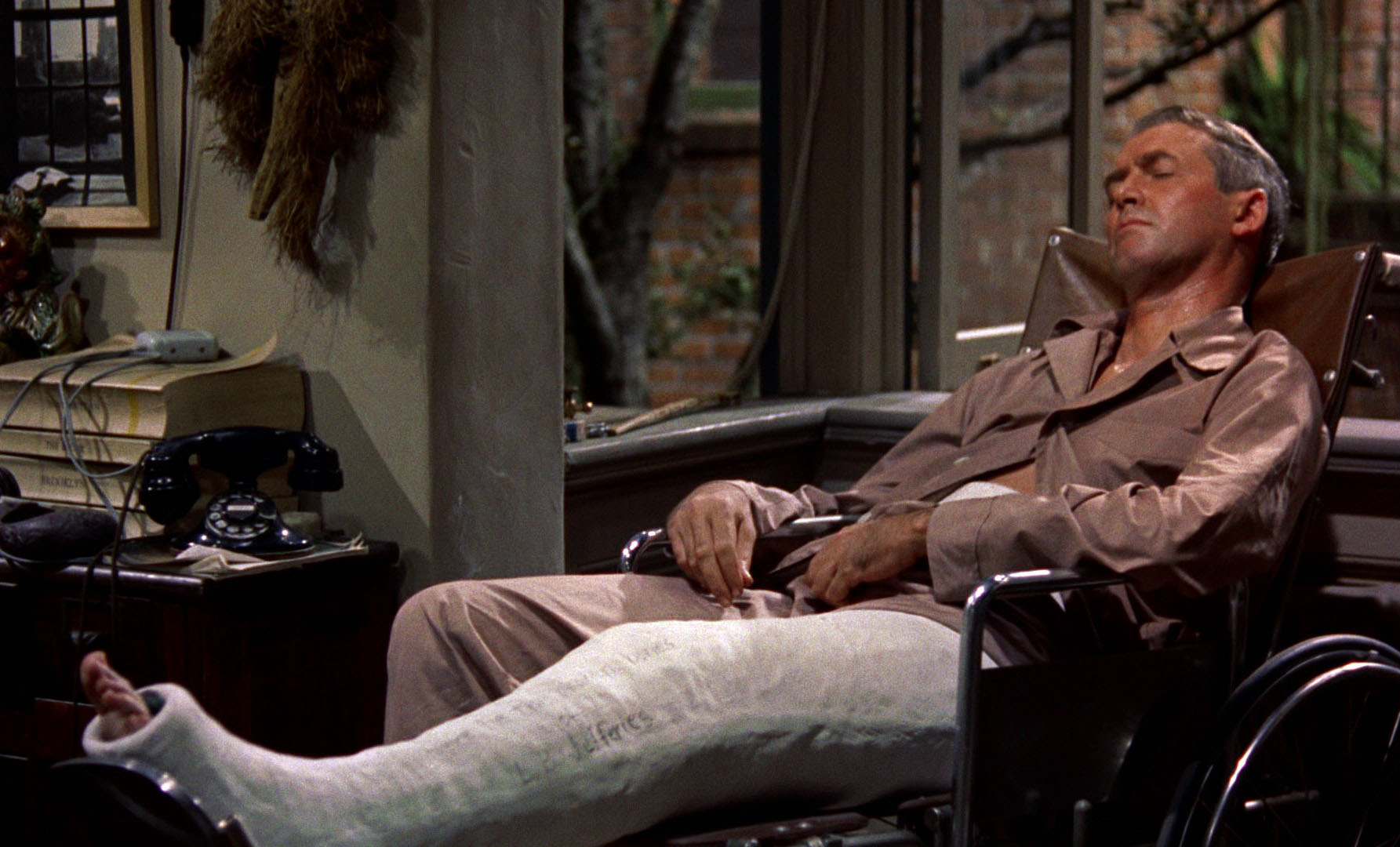 Hitchcock was undeniably a technical master of his craft, understanding innately how to build tension within not just a scene but a film overall. Too often, filmmakers can craft a legitimately tense moment or sequence, but within an overall weaker movie. Very few directors have managed to pull of creating entire feature films of mounting menace and dread quite like he. He manipulates us into willing accomplices to Jeff’s perverted sense of spying as a fun, harmless game until it isn’t, and by then we’re too far into the story to morally argue against it. The film has a rhythm to it, a flow that is undeniably out of the director’s toolbox, coupled with the 1950’s visual aesthetic and the distinctive city-scape sound design – including layered ambient music from different artists – cuing us into this closed-space thriller like a bear to honey. 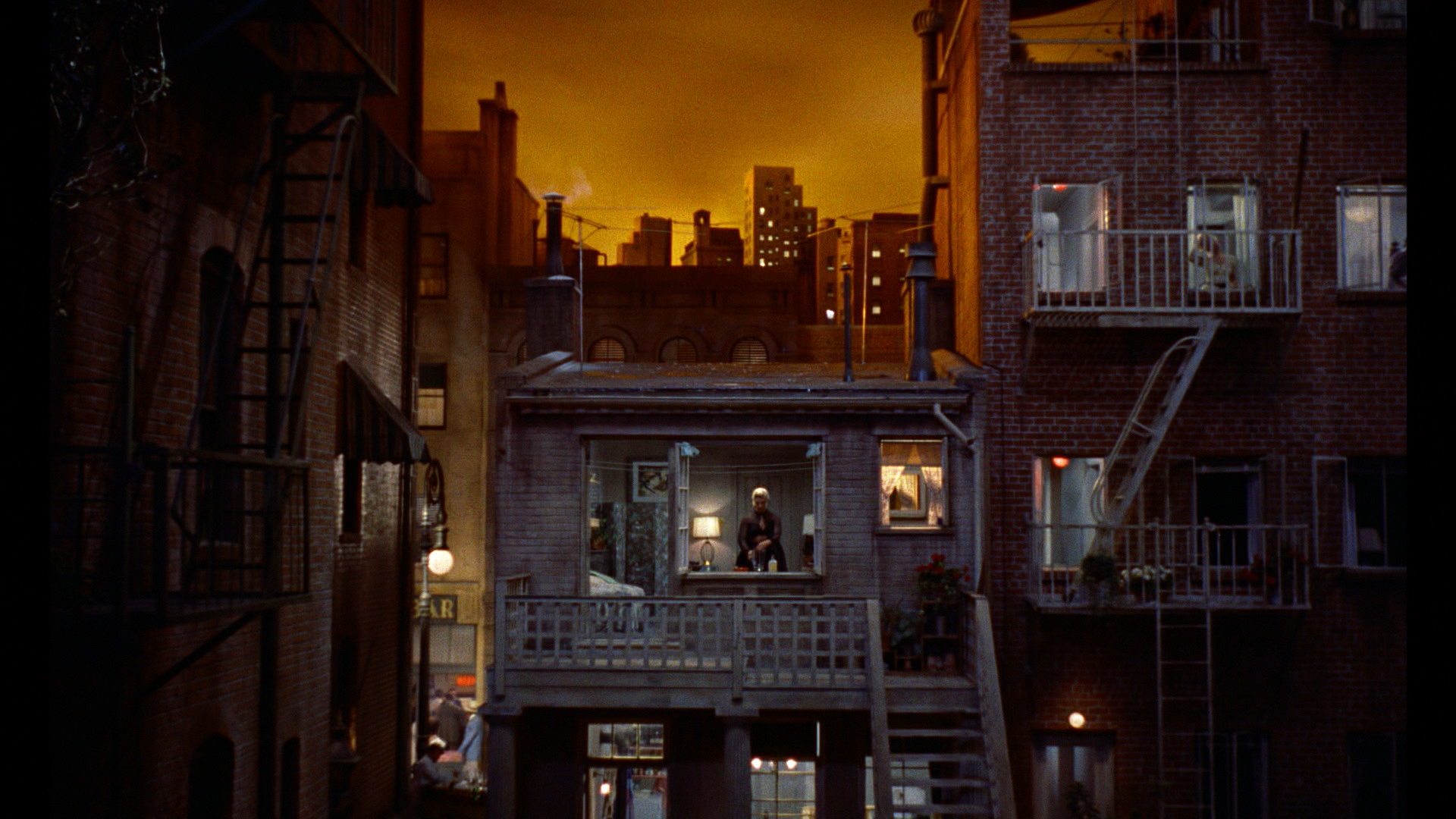 Rear Window is an absolute masterpiece of overt and subversive dread, predicated upon our love of watching bad shit happen to other people, with a lead character effectively confined to an insecure location at the whim of the film’s villain, and a villain who may, or may not, have committed the ultimate crime and nearly escaped prosecution. Arguably Hitch’s greatest film that isn’t Psycho, there’s nary a moment here wasted or not working in service of the story, the story about characters and people that jerks you into its grasping, clutching mystery and strangling the breath from your throat as it turns into an outright horror movie. Rear Window is superb.