Hidden beneath this mindless jumble of half-assed science and close-ups of a perpetually confused Keanu Reeves, Chain Reaction had the potential to actually be a pretty decent B-movie. A plot involving possible perpetual, almost limitless energy still resonates even to this day, and is utterly slaughtered by Andrew Davis’ inert direction and the hackneyed, trope-ridden screenplay that does neither its characters or actors any favours at all. Billed as a kind of techno-thriller, Chain Reaction features an undercooked villainous Morgan Freeman performance, a smattering of minor cameos (including Michael Shannon) and some glaringly poor visual effects, suffering the limits a $50m budget could afford in bringing one of the film’s crucial early sequences to life. 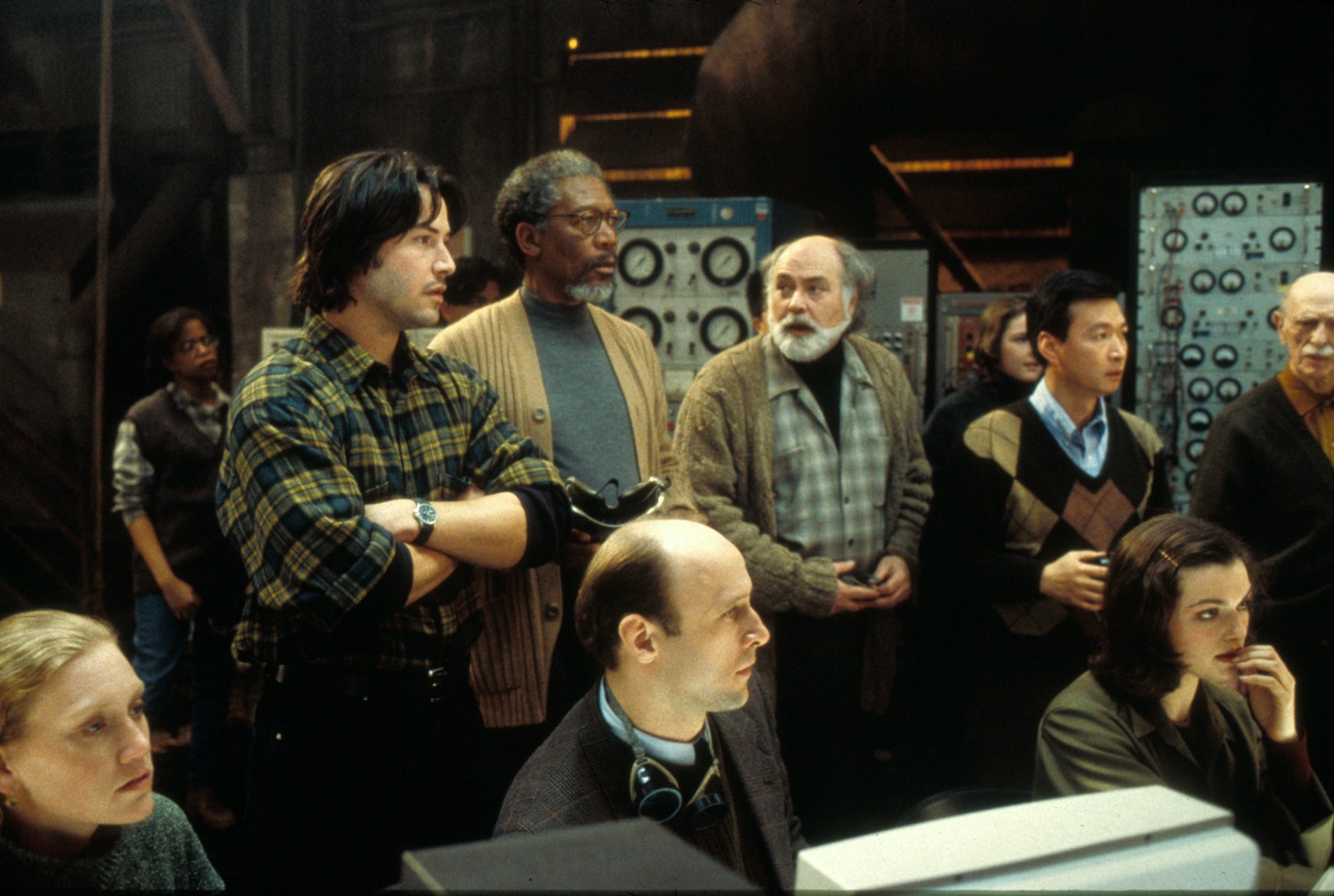 Reeves plays machine worker Eddie Kasalivich, part of a team of Chicago University scientists exploring the idea that plain old water holds the key to unlimited, hugely inexpensive energy production (using a technology I still don’t understand) in an old run down part of the city. After accidentally figuring out how to succeed with their experiment, the project is sabotaged by unknown forces, causing an explosion that decimates over 8 city blocks, with Eddie and colleague, physicist Lily Sinclair (Rachel Weisz) to go on the run as prime suspects. Their associate, Paul Shannon (Morgan Freeman) was ostensibly overseeing the project, but his motivations turn more sinister as an association with C-Systems, run by chairman Lyman Collier (Brian Cox) trying to replicate the process for themselves to try and “prevent the collapse of civilisation”. Eddie and Lily are pursued by the FBI, led by Agents Ford (Fred Ward) and Doyle (Kevin Dunn), who rapidly come to realise that the fugitives may not be quite as guilty as first believed. 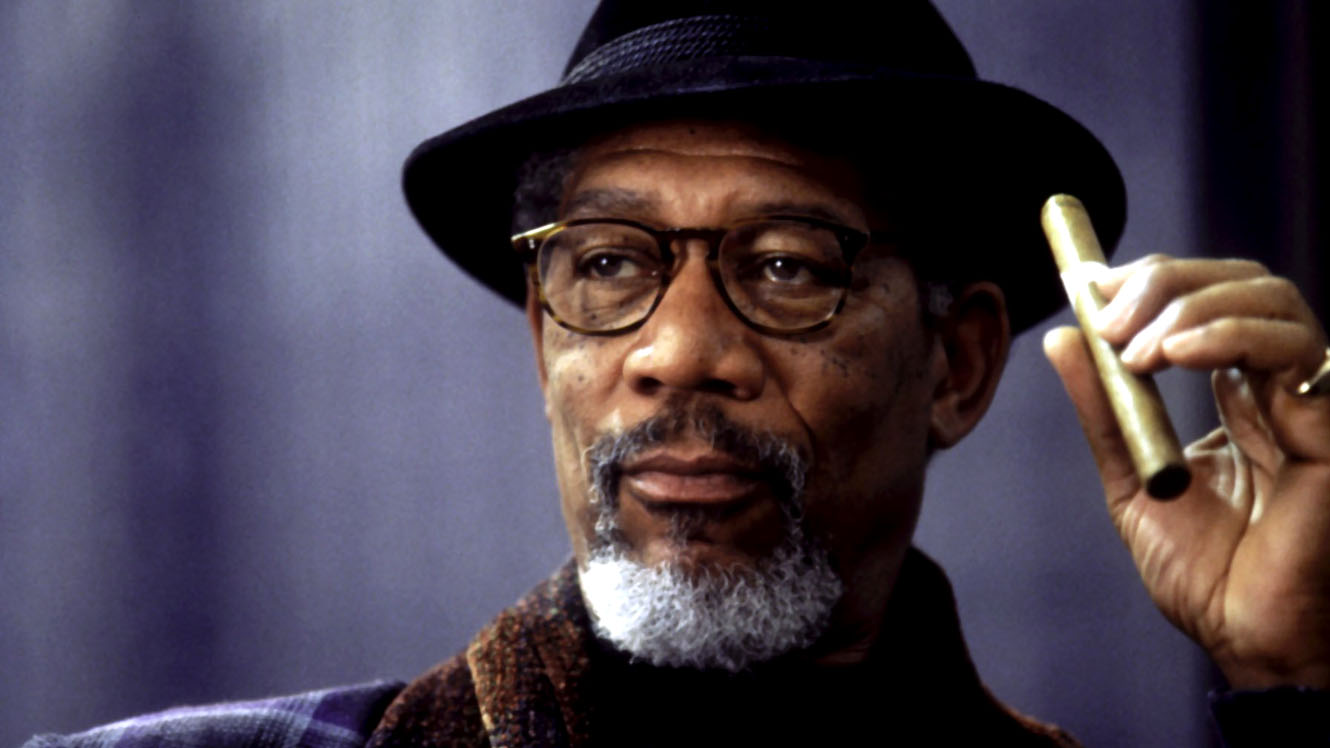 Chain Reaction is one of those rare 90’s action films that markets itself superbly but falls apart on the big screen. It’s a film that has any number of thrilling chases, explosions, ticking-clock finales and pulse-pounding “twists” within its inane screenplay, and one might imagine the studio executives salivating at the footage coming out of the trailer cutting room. Sadly, the film isn’t a sum of its best parts, wasting a hugely competent cast in nonsensical sci-fi gibberish and technobabble that will enthuse a willing audience of muppets but insult the intelligence of anyone with half a brain. The premise of drawing energy from water, through some kind of laser-focused extraction of hydrogen (some kind of fusion? Fission? Not sure…) is an intriguing one for conspiracy theorists and ham-science fans, the film taking a stance that a rapid upending of global financial stability is preferable if it gives us all clean, non-polluting ways to charge our iPhones. 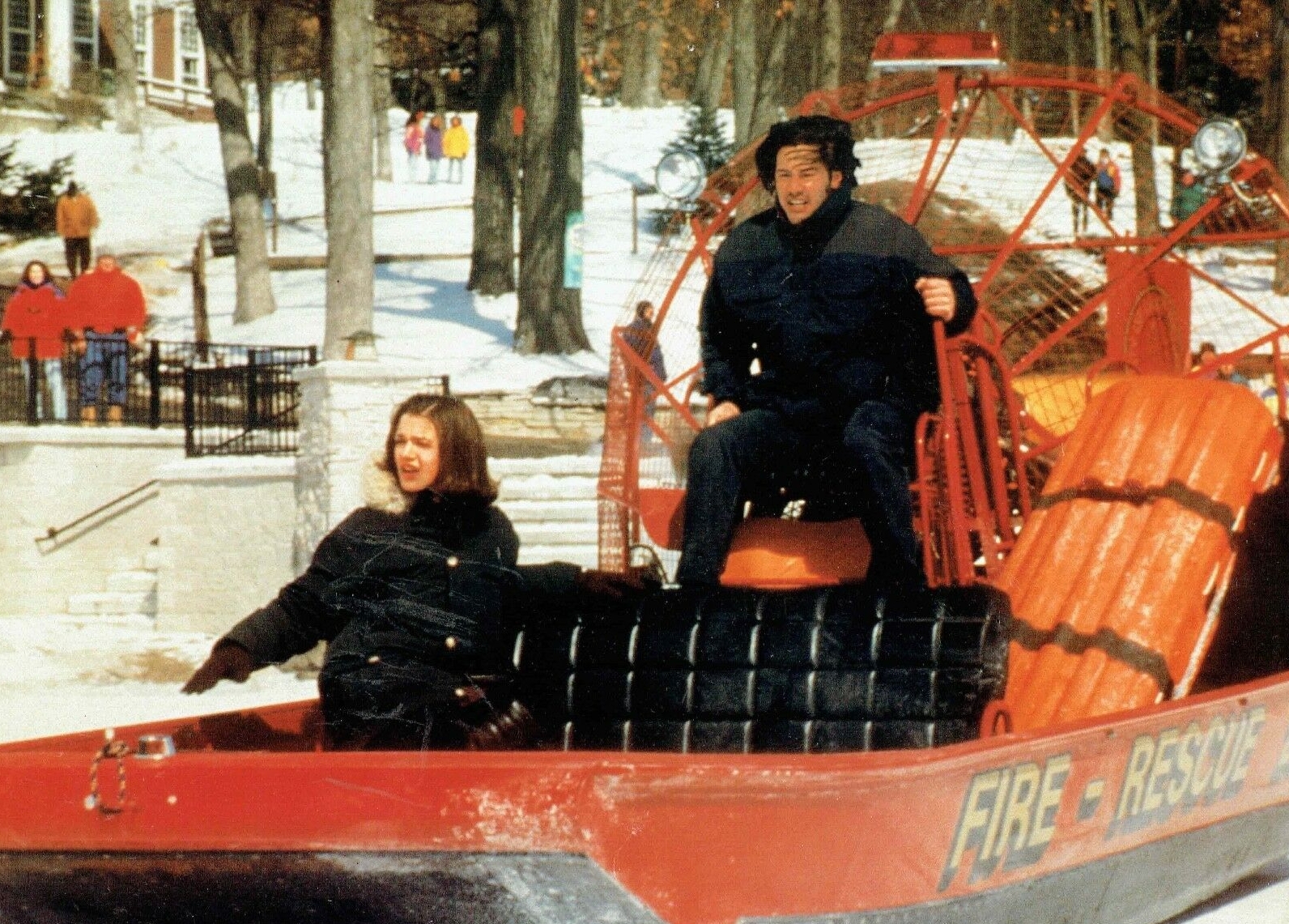 I’m not sure JF Lawton and Michael Bortman, who wrote the screenplay from a story by Josh Friedman, Rick Seaman and Arne Schmidt, found the right balance between scientific advance and captivating characters or an interesting premise: director Andrew Davis is perhaps better known for helming the Harrison Ford version of The Fugitive, and those chops obviously lent themselves to Chain Reaction’s pursuit-driven storytelling. Sadly, neither the script, the characters or the direction are really any good, at least not enough to generate the… er… spark needed to make this film sing. The two lead roles, played by Reeves and Weisz, are generic Good Guys, Reeves’ stoner-boy acting ability and Weisz’ up-and-coming star power facilitating as bland an on-screen coupling as I’ve seen in a while. Neither Reeves or Weisz seem committed to the role – Chain Reaction is largely a paycheck film for all involved – and Morgan Freeman’s rockstar gravitas is about the only thing keeping this semi-violent, bloodless nonsense from sliding into utter disasterville. Putting Kevin Dunn and Fred Ward as scenery-chewing FBI agents on the hunt for the truth is a clever idea, and both actors, while given absolutely no room to develop actual “character” inside this dull load of expository dialogue, seem to be having fun wasting yours and my time. Brian Cox is about the most exciting actor in the whole film, slaying the scenery with his patented brash delivery and sense of sadistic fun as the Bad Guy intent on getting what he wants. It’s not a subtle film, this one. When you cast Brian Cox, you get the whole Cox, and nothing less. 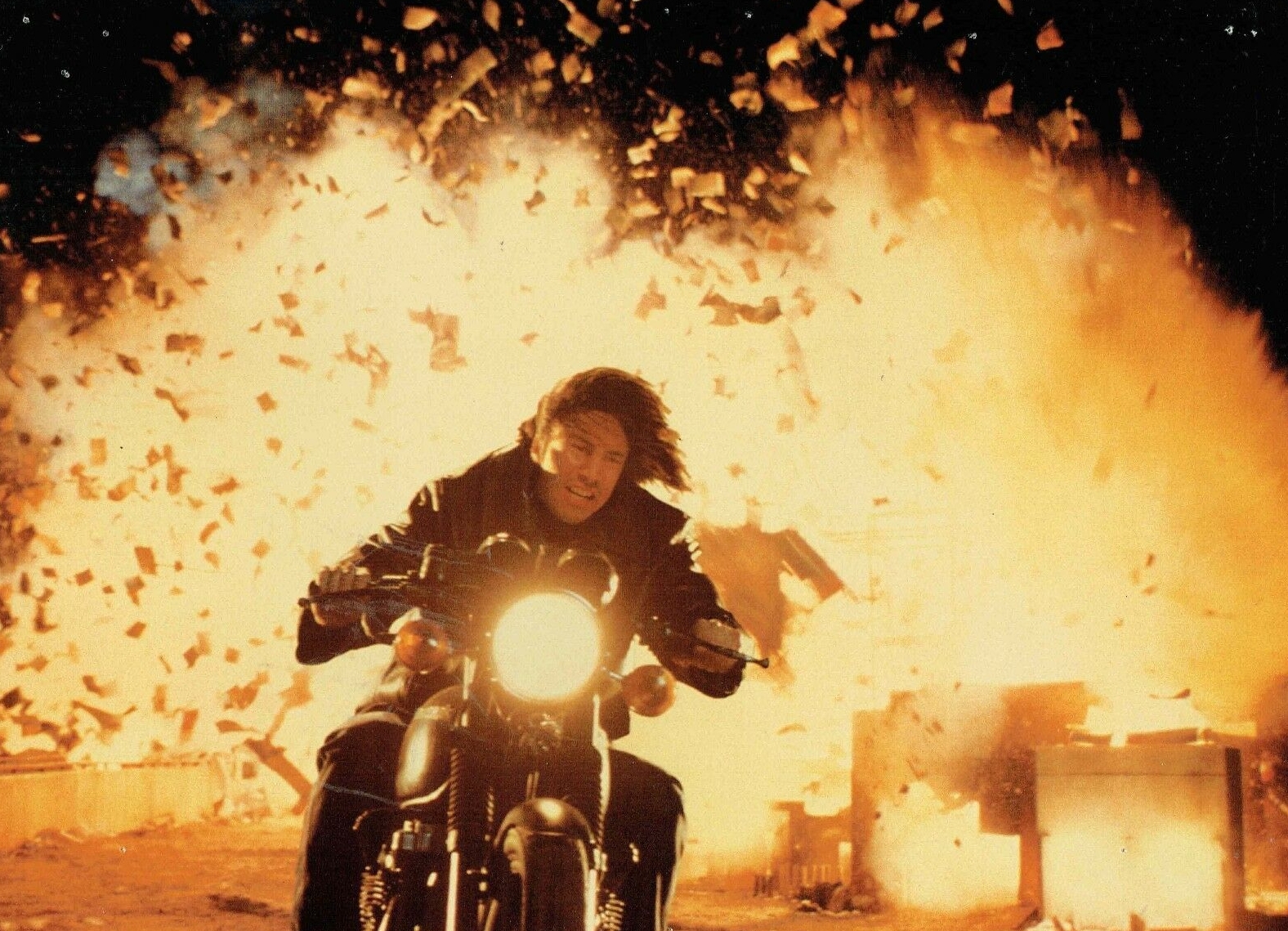 Sitting atop this rather excellent cast and a dull, insipid screenplay, is Andrew Davis’ direction. While the action sequences feel decidedly stuck in the 90’s, and the limited number of visual effects are very, very poor by today’s standards, the drama and sense of breathless pursuit and espionage-y plot wrangling doesn’t really engage like it ought. The film’s signature sequence, in which a massive explosion decimates an entire suburb of Chicago’s outer industrial areas, actually looked pretty cheaply done, having witnessed far superior work in contemporary films of the time like Independence Day, Daylight and Broken Arrow, to name a few. There’s one particularly brutal shocker, a shot of Morgan Freeman looking out from his hotel room across the city skyline to where the explosion’s glow is dying away, that will make your jaw drop to the floor if you’re watching on a modern HD television screen, it’s so awful. Bless him, however, Davis minimises the use of nascent digital technology and grounds his film in “reality” as it were, with actual stunts and sequences performed by humans against actual locations in and around Michigan. If there’s a plus to Chain Reaction, it’s probably this, even if the chases and actiony-antics make little sense. 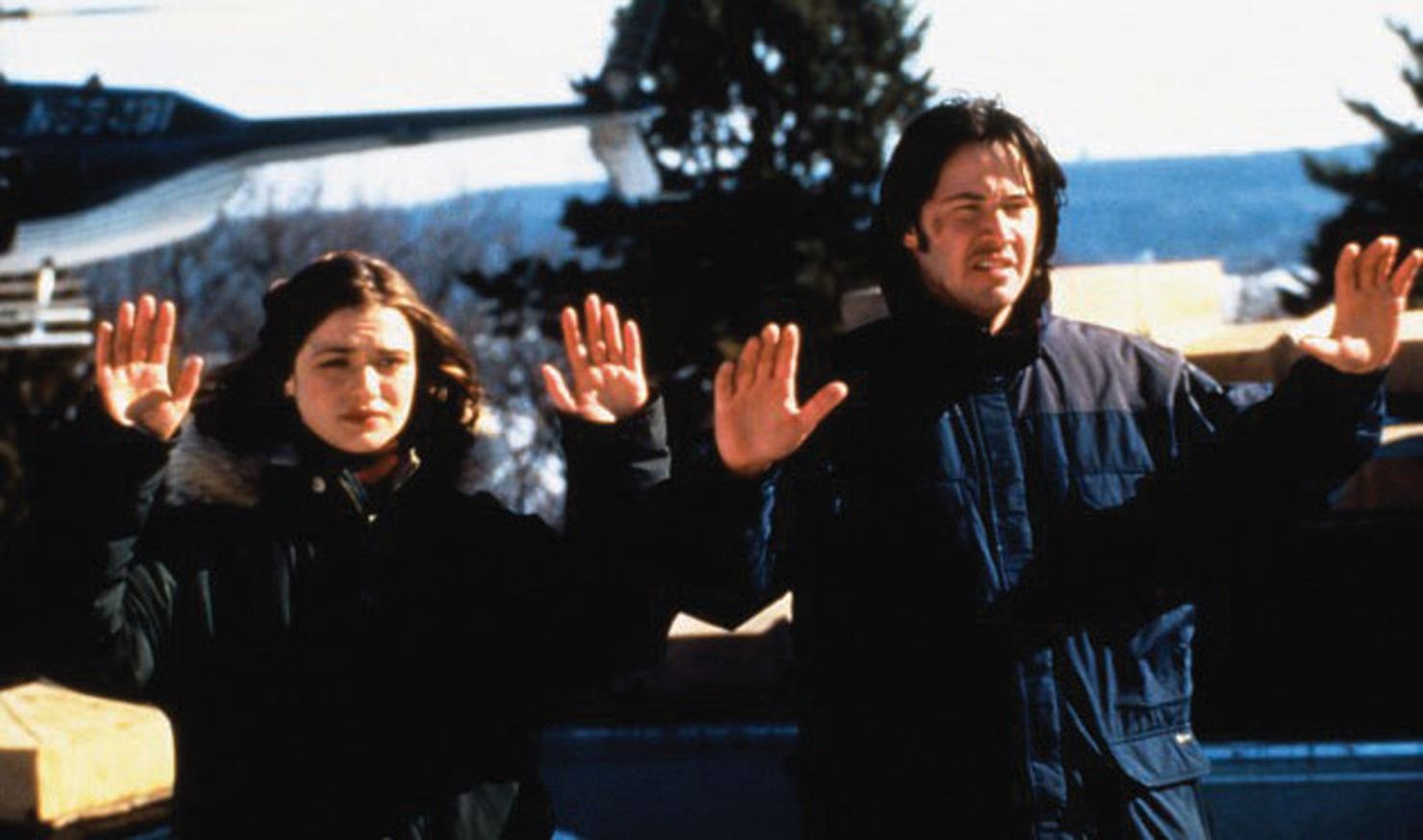 Chain Reaction is a bland, undefined 90’s action film that plants its flag firmly in that decade and refuses to budge. The key selling point, Keanu Reeves (who was coming off the success of Speed and the absolute turkey that was Johnny Mnemonic), may as well be made of cardboard for all he brings to the film, and poor Rachel Weisz would look back on this film as a career lowlight, for sure. An unmemorable Jerry Goldmith score (those are rare indeed) merely compounds the agony of those seeking something to hold onto intellectually within the confines of Chain Reaction’s garble-science, with flat cinematography and inert action sequences whoring a riff on Die Hard mixed with The Fugitive with limited success. Skip it.