I’ve never hidden my general disdain for the romantic comedy subgenre. Generally, I actively avoid watching them, because I find them to be generally inane, filled with cliches and characters as obnoxious as all get out. Most of them follow one of about three archetypal plot arcs involving the boy-meets-girl (or vice versa) and I often find them more infuriating than what I assume to be the expected reaction of “awwww”. To find Rebel Wilson headlining a romantic comedy in and of itself skewers the romantic comedy genre, with Isn’t it Romantic being a pleasant, often amusing and fitfully funny parody film that subverts the expectations you have about it. Oh, it’s hardly revolutionary, and some of the jokes are a touch too overcooked, but Wilson makes for a disarming lead character, and abetted by fellow Aussie thespian Liam Hemsworth and Pitch Perfect co-star Adam DeVine, Netflix’ latest comedic gamble is a saccharine success of worthwhile proportions. 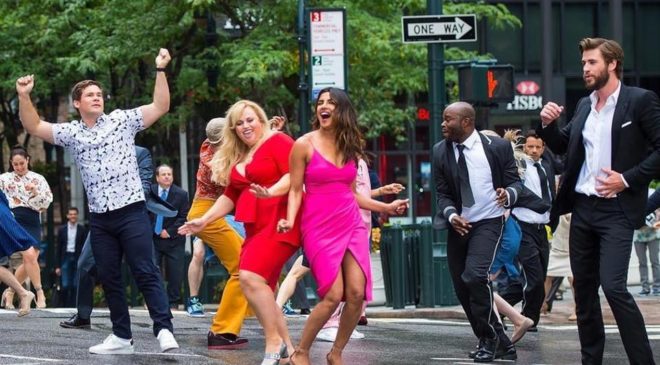 Natalie (Wilson) is an Australian architect working in New York City, where she spends most of her time designing parking garages with her subordinate, film fan Whitney (Betty Gilpin). Natalie’s mother (Jennifer Saunders) ensured during her child that she negatively geared romantic comedy movies in such a way as to promote failure; consequently, Natalie doesn’t believe in “Happy endings”. So when she is mugged in a subway and wakes up inside a virtual romantic comedy movie, complete with an overly saturated colour palette and hilariously cliched rom/com “rules” (such as no swearing, and no sex scenes), the dynamic between her work colleague Blake (Liam Hemsworth), and best friend Josh (Adam DeVine) and his incredibly attractive girlfriend Isabella (Priyanka Chopra), changes to force her into accepting that this kind of cliche might work in her favour. 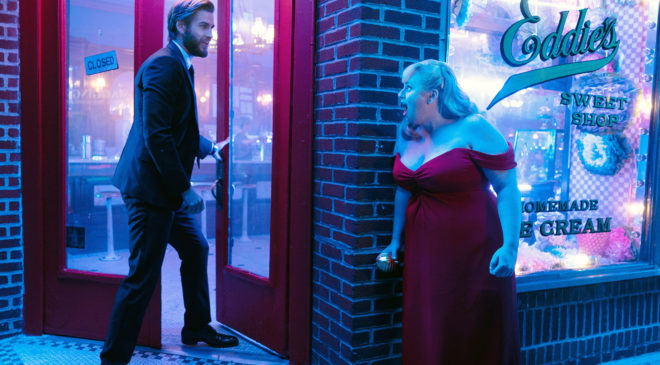 Isn’t It Romantic works on the premise that romantic comedy movies are driven by formula – a little like every genre of film, let’s face it – but formula designed to latch onto an audience’s empathy and generate attachment to the central characters. The film liberally borrows from every successful exponent of the genre – Pretty Woman, Notting Hill, Suddenly 30, My Best Friend’s Wedding etc etc – to bring mild laughs to the script, written by Erin Cardillo, Dana Fox and Katie Silberman, even if the satire doesn’t bit anywhere near as hard as it could or should. Cliches such as the lack of swearing, clothes-shopping montages, overly camp gay side-characters, hypersexual leading men and generally plain actual leading men, as well as mildly insane “best friend” comedy relief and shtick such as slow-motion, ensemble song-and-dance routines and cloyingly nostalgic photography of major metropolitan areas (here, the film lovingly depicts New York City as a virtually technicolor utopia of beauty and love), surround Rebel Wilson’s snark-witted Natalie and attempt to bludgeon both her and us into admitting that, you know, maybe romantic comedies aren’t all that bad. Oh, they are, but Isn’t It Romantic takes great pains to point out just how clever it is by parodying them. Only, it’s not that clever. 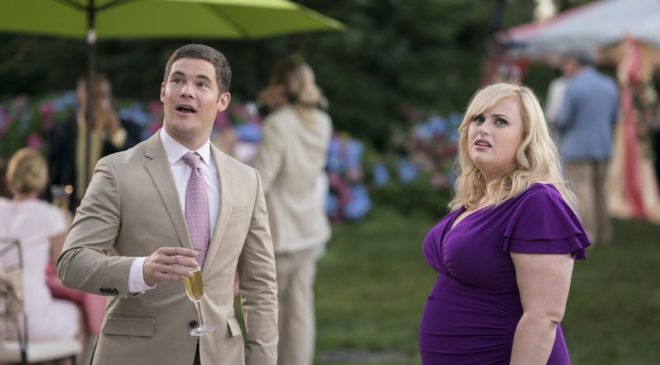 Wilson transitions from Pitch Perfect breakout supporting role to full-fledged leading lady, gamely bringing her sarcastic wit and pointed truth-telling to a genre that nominally avoids such acerbic examination. The actress’ style stitches up the genre’s lack of observational accuracy and delightfully pours acid on tropes and cliches within this most rigid of formulae, delivering both obvious and subtle references to the American idealism and trashy nature of the genre, filled with meta-references (none the least of which is having Wilson and DeVine once again play against each other as love interests, given their similar arc in the Pitch Perfect films) and objectively funny callouts of the genre’s pitfalls. A sequence in which Wilson is bedded by Hemsworth’s hunky Blake sees her confused as to exactly why she would wake to him post-coitus emerging from a soaking shower, with no memory of them actually doing the deed, and her frustration at this gap in the “film” plot is spot on. So too, her inability to curse inside the world of the “film”, which is equally hilarious. Wilson’s performance style is great when she’s pratfalling or asked to do something silly, but, sadly, when the actress is forced to emote or touch a dramatic curve, things kinda sputter to a slow crawl. The film isn’t as funny as it ought to be, nor is it really able to slice the genre’s more laughable traits as precisely as it obviously wanted to, and so Isn’t It Romantic ends up kinda finding a middle ground of enjoyment and remaining steadfastly there. 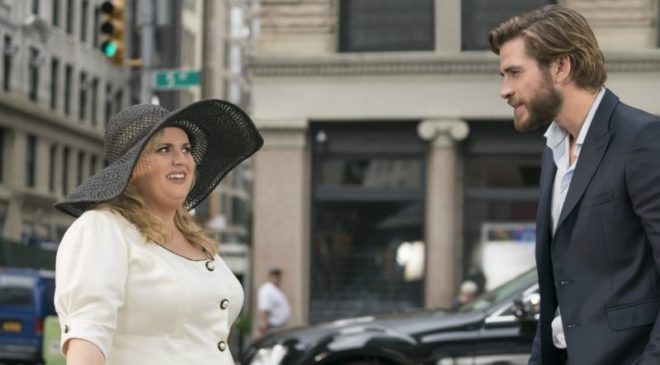 For me, the film’s chief asset is Liam Hemsworth, who plays up the hunky male obsession type with a glint in the eye and a spring in the step. Hemsworth – brother to Thor actor Chris – has an appealing chemistry with Wilson, and the pair obviously seem to be having a blast in their scenes together (a streetlight walk down an soft-focused New York City street is a genuine moment), but the relationship between Wilson and DeVine, while affectionate, doesn’t ring with the truth needed to want us as viewers to see them get together. When DeVine’s Josh finds himself smitten with the far more physically attractive Priyanka Chopra (something Wilson’s character herself accentuates immediately) the film doesn’t give us a real reason for them not to be together, just that he’s “obviously” meant to be with Natalie throughout, and their scenes together are surprisingly awkward and cinematically unkempt. A glimmer of joy comes from Brandon Scott Jones’ over-the-top campy gay next-door neighbour/friend/confidante who pops up at unexpected moments (seemingly defying the laws of physics), and the film absolutely nails the absurdity of this kind of character. 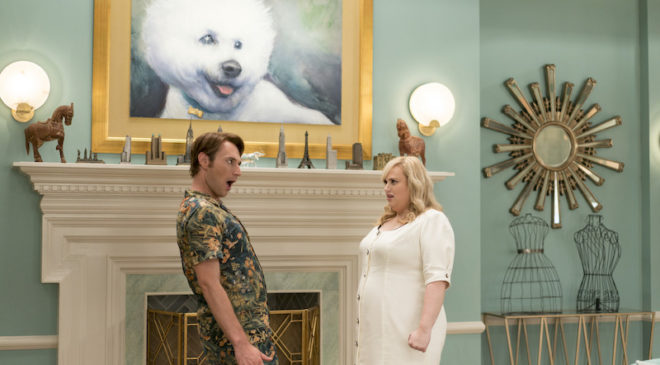 Isn’t It Romantic lacks considerable bite when it comes to really skewering the romantic comedy genre, but it offers a smattering of laughs and an enjoyable central performance from Rebel Wilson, who co-produced the film. The script isn’t as sharp as I’d have liked, offering a diluted wit and dulled dismantling of genre archetypes, but it’s enjoyable thanks to the workmanlike cast and director Todd Strauss-Schulson’s effervescent direction. There’s a lot to enjoy here if you’re in for a casual night in, but the film asks nothing of the audience than just to accept Rebel Wilson working in a NYC architect’s office and at the end of the day feels like something cleverer was missing. Worthwhile, although hardly the jugular-chewing satire it could have been.