In any other universe, pitching an animated film based on the Biblical exodus story would have been a nigh-impossible sell. Thankfully, for then newly-minted studio DreamWorks, founded by Spielberg, Geffen and Katzenberg, they were working under no such constraints; Katzenberg had frequently pitched the idea to Disney, who baulked at the film’s potential controversies, but had no difficulties obtaining funding through his own shingle’s enthusiastic reception. The Prince of Egypt is a film combining traditional hand-drawn animation and nascent computer graphics, similarly to that employed by Disney at the time – DreamWorks subsumed smaller animation studio PDI to obtain 3D-CG Antz only a few years earlier – and would become a monster hit for the studio, a critical juggernaut, and spawn a certified award-winning hit in title song “You Will Believe”. Given the problematic nature of turning one of Christianity’s most revered non-Christ-centric stories into what was essentially a commercially prestigious yet still conventional cartoon, and the possibility of a backlash against trying to make a cartoon a “prestige” picture, you’d be forgiven for having reservations when plonking down your hard-earned back in 1998 when the film debuted. You’d have been dead wrong. 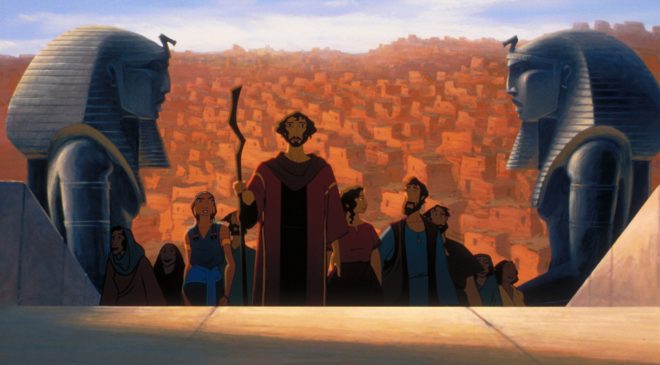 Ancient Egypt, and the Hebrew population has been enslaved by the cruel Pharaoh Seti (Patrick Stewart), who orders the infanticide of all the newborn Hebrew boys to crush a potential rebellion. Fearing for her son’s safety, a Hebrew woman casts her son, Moses (Val Kilmer) down the river in a reed basket, where he is promptly discovered by the Pharaoh’s wife, Queen Tuya (Helen Mirren) and adopted as her own son, and a brother to her natural-born son Rameses (Ralph Fiennes). Years later, Moses and Rameses remain affectionate, although competitive, until Moses discovers his true heritage from his biological sister Miriam (Sandra Bullock) and her brother Aaron (Jeff Goldblum). Devastated, Moses sets out into the desert, where he is confronted by God and tasked with freeing the Hebrew slaves, now ruled over by Rameses following the death of Seti. Moses, hesitant to go up against his former adoptive brother, instigates a series of plagues on Egypt through the power of the Lord, including the wholesale slaughter of all first-born Egyptian children via the power of God, before Rameses, fearing total annihilation, frees the Hebrews into the desert. However, Moses’ journey is not over yet, for eventually Rameses repents his actions and pursues the fleeing slaves down towards the Red Sea, where he hopes to kill them all. 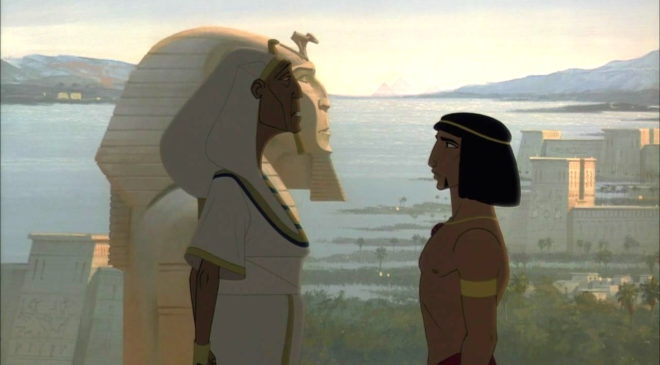 The Prince Of Egypt kicks off its dazzling voyage into ancient times with a title card asking the audience to go with it, to overlook minor liberties taken with Biblical text in favour of cinematic dramatics, and this is a wise move on the part of the filmmakers. It essentially robs complainants of any ammunition to take to the film’s more energetic extravagances; these are varied and numerous, from the film’s glorious depiction of the Plagues of Egypt, to the eventual Passover, to the climactic parting of the Red Sea, the film is stuffed with memorable sequences and truly inspired animation, giving the famous story a sense of agency the stuff old 50’s live-action epics could never hope to replicate. I’d even go so far as to say this remains the single best adaption of the Exodus story committed to film to date – and yes, I include Ridley Scott’s similarly visual-effects-driven Exodus: Gods And Kings in that – delivering both an accessible roster of characters, a remarkably human arc for both Moses and Rameses, and some dynamite visuals that only animation could achieve in pursuit of giving the story legitimacy and, if I can be so bold, belief. Whether you believe in the film’s message or not (ha), there’s a wonderful elegance and terrifying magnificence to The Prince Of Egypt’s evocative story of brotherhood, redemption and revelation, and that fact that translates so well onto the screen is a feat in and of itself. 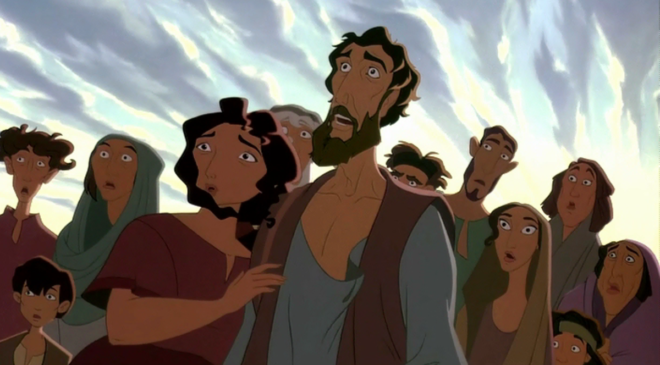 I’m no biblical scholar, but what I found remarkable with the film’s expanded screenplay is how well it weaves that sense of family, sense of ownership of Moses into the Hebrew people, within the smaller and more intimate context of his relationship with Rameses. The dynamic between the two brothers, in which one only wants to please his father (and later supersede his father’s glory) and the other only wants a world where slavery isn’t a thing, is well captured in the subtle interplay between the pair that isn’t overt – leastways not initially – and both Val Kilmer, as Moses, and Ralph Fiennes, as the more belligerent Rameses, are genuinely likeable in their respective roles. Kilmer, who shoulders most of the film’s emotional investment, does brilliant work in giving Moses a real warmth and saddened humanity: sad at Rameses’ unwillingness to bend, sad at his being chosen by God to confront Rameses in the first place, and sad that at the end of the day, Rameses lives long enough to become the villain in his own story. Hubris counts for a lot in the Bible, and Prince Of Egypt makes this crystal clear. The biblical dot-points of the story are not just hit, they’re hit for a home run – the plagues, the Passover, the chase to the Red Sea and its parting at the hands of Moses and the Lord, are all rendered with exquisite clarity by a script so brilliantly conceived in its simplicity and modernity, it makes Charlton Heston’s lumbering 50’s version of the story seem positively Lovecraftian in its complexity. Somehow, animation seems to bring the story to life in a way that feels believable, approachable, almost more realistic than a live-action version, and the way the central characters are treated (and treat the viewer) is remarkably powerful. These aren’t dusty literary antiquities, they’re living, breathing characters inhabiting a fully-realised world. 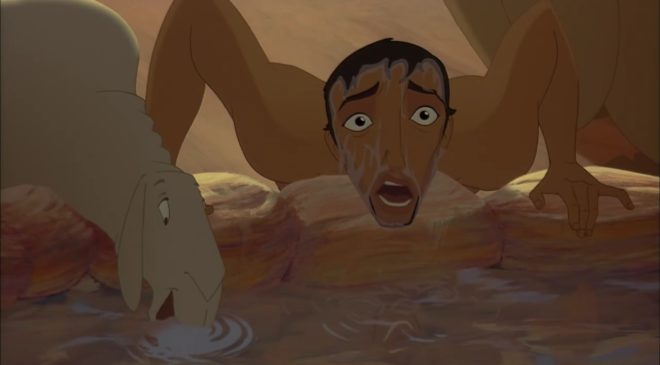 The cast is, as you’d expect, fantastic. Names like Jeff Goldblum and Sandra Bullock appear in supporting roles, Patrick Stewart delivers necessary gravitas as the first Pharaoh, Seti, and Danny Glover, Steve Martin and Martin Short provide noticeably good work for their relatively minor obscurity. Michelle Pfeiffer gets good billing but underworked vocal time as Moses’ wife, Tzipporah, but the film’s undeniable star is Kilmer, alongside a potent Fiennes. Both men demand attention whenever they’re speaking, and the film’s contrast between the pair is excellently portrayed through animation that, for its time, was brilliantly conceived and executed. The look on Rameses’ face when he realises Moses has “betrayed” him to save the Hebrews is genuinely moving, and the conversational sequences across the entire movie are of an equally enthralling nature. The film’s visual effects, from the blood-red Nile when Moses turns it to blood, to the pestilence and eventual spirit of death coming down into Egypt and slaying all the first-borns, together with amazingly cool hieroglyphic-montage backstory elements recounting how the Hebrew children were all killed by Seti, and of course the unforgettable parting of the Red Sea (seriously, you wont find a better iteration of this scene anywhere) make for a memorably moving Bible-film experience. Throw in Hans Zimmer’s powerful score and some terrific, earworm-friendly songs (from lyricist Stephen Schwartz) and Prince Of Egypt remains a defining entrant in modern Bible faith-based film-making at a commercially mainstream level. In some way, I think the film challenged audience’s notions that an animated film had to be for kids – that a film could remain adult-themed and be drawn, that was something different. 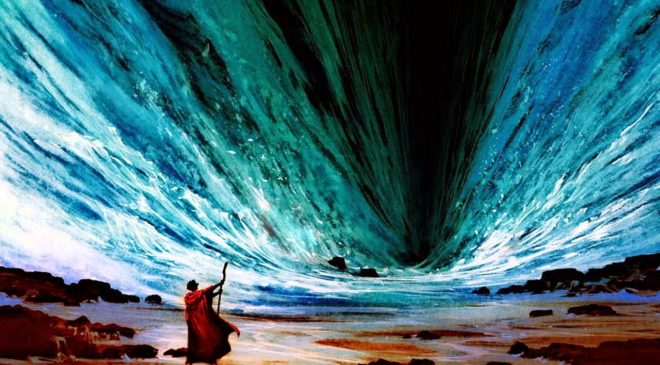 Few films of faith remain as popular with audiences of all persuasions, religious or not. If you aren’t enamoured with Christianity, I think you’ll still enjoy the dramatics of the film anyway, and if nothing else the Red Sea sequence just goes to show that the Lord absolutely 100% kicks Egyptian asshole when he wants. Packed with action, dignified and yet accessible to folks of faith or not, combined with marvellous songs and a sense of humour at times (I mean, c’mon, if you can’t laugh at Martin Short and Steve Martin playing shyster charlatan “wise men”, you’ve lost the plot), The Prince Of Egypt will make your heart soar and your spirit sing, regardless of your persuasion on God. Don’t let the premise put you off; Prince of Egypt is a remarkable animated film that, like the story it is based on, stands the test of time.