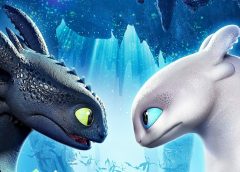 While Pixar continues to dominate the animated feature film landscape with hit after hit, one franchise slides well under the radar of glory and acclaim despite an absolute refusal to remain second-rate. Dreamworks’ How To Train Your Dragon films have reached a high-water mark of storytelling and consistency of character few ongoing series can claim, from voice work to animation and an overall aesthetic of something many animated films shy away from: real stakes. The Hidden World, the third and presumably final chapter in the Dragon franchise, picks up soon after events of the previous film, and capture central figure Hiccup in a transitional phase of his life – now the chief of the village, he must make decisions that effect not only himself but those he loves, and it’s a burden he carries with a heavy heart.

One of the most surprising story points with the Dragon franchise came with the second film, in which filmmakers took the daring chance to upend Hiccup’s world by introducing his long-thought-dead mother Volko (voiced here again by Cate Blanchett) but also kill off his beloved father, Stoick (voiced by Gerard Butler, who reprises the role here in a series of flashbacks to Hiccup’s childhood), as a method of propelling Hiccup’s journey to manhood forward with an acute sense of loss. The Hidden World does something similar in many respects, again unafraid to tackle the breaking of a union that we’ve become as immensely comfortable with as we’ve become infatuated. The dynamic between Hiccup (Jay Baruchel, lending a degree of maturity to his voice work here) and Toothless, his cat-like black Night Fury dragon, is key to the entire series, both suffering from a loss of a key bodily function (both are injured and lack specific body parts which makes their relationship symbiotic in a sense) and joined together by this affinity.

With The Hidden World, the writers have crafted a story in which their parting, while inevitable, stings with a sense of keen friendship, the “best buds” who know they’re destined for other things apart. Where the first film had them meet and get to know each other, this sequel film brings their association full circle, with the introduction – in true bromance style – of a third wheel to their friendship, a white female Night Fury over whom Toothless is desperately smitten. The relationship between Hiccup and love-interest Astrid (America Ferrera) kinda takes a back row seat for this film, although there’s enough established chemistry between the pair to make the eventual denouement – which I won’t spoil – work a treat, in spite of feeling like an arc that was shoehorned in at the last minute. Essentially, the village of Burk is now overcrowded with dragons, making them all a target for trappers looking to make a buck. Hiccup must make the bold decision to up stumps and make a voyage across the sea to a mythical “hidden world” at the where the Earth ends, where he believes they can finally all be safe. They are pursued by villainous hunter Grimmel (F Murray Abraham, sounding far more Scandinavian than I expected!) who wants to kill Toothless in some meaningless vengeance quest, while Toothless becomes enamoured by a beautiful white female Night Fury (or, as Astrid terms her, a Light Fury), and engages in some truly hilarious courtship.

When it’s not engaging in dazzling action sequences and dragon-centric cavorting, The Hidden World taps into a raging sense of transition, with both Hiccup, now being egged on to finally marry Astrid, and Toothless, finding a mate he never thought he’d ever encounter, having to deal with more “adult” issues than in previous instalments. The themes of the film’s story are handled with delicacy and typical wry wit (Craig Ferguson’s gap-toothed Gobber fills the paternal breach left by an absent Stoick, to a few decent gags) and although it never quite makes good use of the entire ensemble as it has in previous films, here the more intimate and romantic nature of the dual narratives make for interesting and more mature sensibility than the franchise has touched on to date. Those who have followed along with the animated television series which fills in the gaps between movies will feel the sharp jab of loss within the film’s overarching friendship subtext, and even with the central villain never quite living up to his own reputation there’s a great deal of threat to be mined here. As I said, the stakes in The Hidden World are as acute as the previous films’ deadly encounters, and given what happened to Stoick in the previous film you’d have to expect that something might happen here to put that event in the shade. That’s not to say the film is all dark-n-gritty, because there are a large number of warm-fuzzy moments to enjoy; most notably, a protracted “courtship” sequence between Toothless and the Light Fury, which is both lovely and hilarious all at once. It’s so good, it would almost function as a short film in its own right, a standout sequence in a film filled with standout material.

The dialogue is, as always a highlight, although you do kinda feel the writers desperately trying to find new and interesting ways to utilise the rather large ensemble of extraneous characters – secondary players like Snotlout (Jonah Hill), Fishlegs (Christopher Mintz-Plasse) and fraternal twins Tuffnut and Ruffnut (Justin Rupple and Kristen Wiig respectively), as well as returning “new” characters such as Eret (Kit Harington) have for the most part almost nothing interesting to bring to the story other than mild comic relief, which is a problem encountered by the increasingly broadening cast of the Ice Age franchise: giving each character their own mini-story or sub-arc within the film, and paying it off to satisfaction at the end, has caused many of these family friendly franchises to run stagnate to some degree. That said, there’s plenty of nice gags both broad and subtle at work here, and younger audiences will find a lot of the snotty, boogery slapstick to be truly gutbusting. The film works mainly through the byplay between Hiccup and Astrid, whose dialogue feels a touch trite compared to previous outings, and Hiccup and Toothless, the latter of whom merely grunts, growls and purrs his way through this film. If there’s a significant problem with The Hidden World it’s how the writers try and bring all these dangling threads together by the end, and while it’s a commendable effort, the wallpaper is, at this point, starting to peel away.

Saving the entire thing, however, is some of the most accomplished animation and visual effects I’ve ever seen. My review of Dragon 2 committed to that film being reference material in every frame; happy to report that The Hidden World not only supersedes it, but does so by several orders of magnitude. The level of detail in texturing, hair and water reproduction, as well as dirt, sand and the oft-used dragonfire effects, is incredible, easily surpassing the unsurpassable work of previous films and making me literally gasp in awe. Toothless’ scratchings of art in a beachhead sand dune are photorealistic, while a climactic oceanic sinkhole effect looks like somebody flew out to a spot in the Atlantic and took some 4K live action footage, it’s that believable. Throw in the sweet appearance of pubescent facial hair on Hiccup and the younger males of the film, which made me laugh, and the added bonus of more depth to the dragons in every frame, and The Hidden World sets a new benchmark of animated perfection that literally boggled my mind. As always, character design and the manner in which the film plays with light and shade, as well as breathtaking landscapes and the visually fantastical, are of the highest calibre.

The Hidden World forms the perfect closing chapter in the How To Train Your Dragon franchise. While it might not reach the lofty heights of its immediate predecessor, The Hidden World accomplishes an emotional, emotionally satisfying conclusion to the entire franchise, which is no small feat in a world where there’s a Toy Story 4. With sublime animation and a captivating storyline to back it in, the film’s biggest and best asset is given the largest chance possible to shine, and if you’re not wiping away a tear or two by the end then your heart must be made of dragonstone.