The Assassination of Jesse James is one film I’ve wanted to watch for the longest time, but have never quite managed to get around to it. I recall the waves it made back in 2007’s Hollywood awards season, where it was up for innumerable gongs and plaudits, and always felt it as something of a personal albatross due mainly to its eclectic cast and Western setting. The American outlaw is a staple of Hollywood, the likes of Jesse James mythologised by countless iterations of his – or others like him – adventures in the formative years of a modern United States. Films such as Wyatt Earp, Tombstone, Dances With Wolves and Unforgiven remain indelible examples of 1990’s Western Cinema, and although the genre had pretty much run its course as we entered the new millennium, director Andrew Dominik’s take on this oft-told friendship and rascally rogue remains a defining entry into the genre, even now. Let not this film’s cumbersome title put you off: this is a movie worth watching, filled with actors acting and lush American landscapes, as well as a compelling story of brotherhood and betrayal that still rings true today. 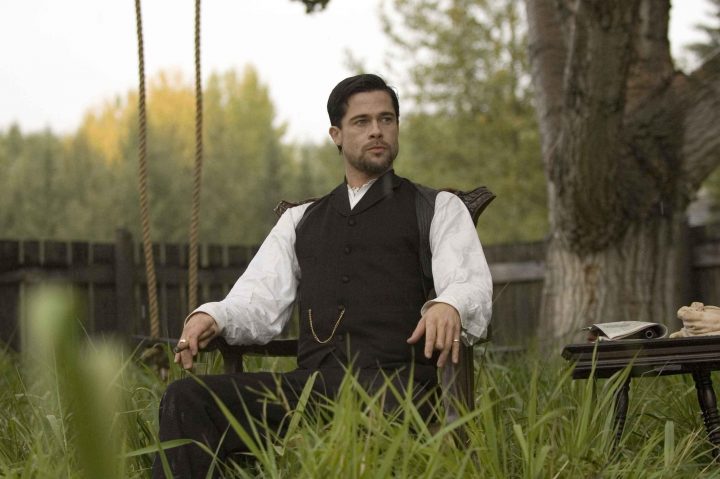 Outlaw gunman Jesse James (Brad Pitt) and his newly formed gang rob a train near Blue Cut, Missouri. A member of his gang, Charley Ford (Sam Rockwell) has a younger brother, Robert (Casey Affleck) who idolises Jesse, and wants to join the gang, despite his age and inexperience. Jesse’s older brother, Frank James (Sam Shepard) leaves the gang soon after the unsuccessful train heist, and Jesse tells each of the lead members to go their separate ways. Jesse strikes up a fascination with Bob, much to the chagrin of Jesse’s cousin Wood Hite (Jeremy Renner), while co-conspirators Dick Liddil (Paul Schneider) and Ed Miller (Garret Dillahunt) secretly plan to kill Jesse and collect on the quite considerable bounty. However, Jesse’s nose for conspiracy is unerring, and he soon tracks down the betrayers, while Bob and Charley join the outlaw for one last ride across the territories to make their fortune. As they do, however, Bob realises that the man he idolises may be planning to kill him, and he has to make a decision that will haunt him to the very last days of his life. 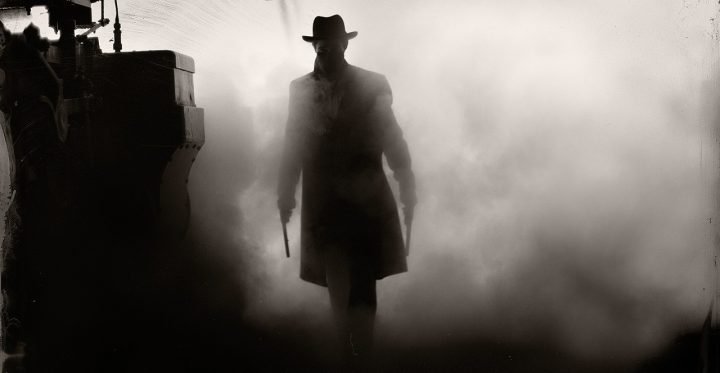 The American West was a violent, bitter place. From scorching Earth to snowbound mountains, the countryside against which Jesse James, Robert Ford and the other criminal outlaws rode roughshod was an unforgiving landscape, a broad canvas on which legends were created and myths formed through courage, heroism, and in the case of this movie, cowardice. At the film’s core is a bromance between gunslingers; the “old dog” of the game, Jesse James, and the enthusiastic newcomer in Robert Ford, the latter worshipping the ground the former walked upon. Based on the book by Ron Hansen, The Assassination Of Jesse James By The Coward Robert Ford paints a bucolic friendship between the pair, with Ford’s inability to truly be accepted by Jesse’s unnerving presence the crucial element to this tragic tale. Robert Ford’s love for Jesse James, the hero he read about since being a child, contrasts against the reality; Jesse James was an asshole and a violent, unforgiving individual, his mere presence made men tremble and his sharp tongue probed deeper than any psychiatrist. 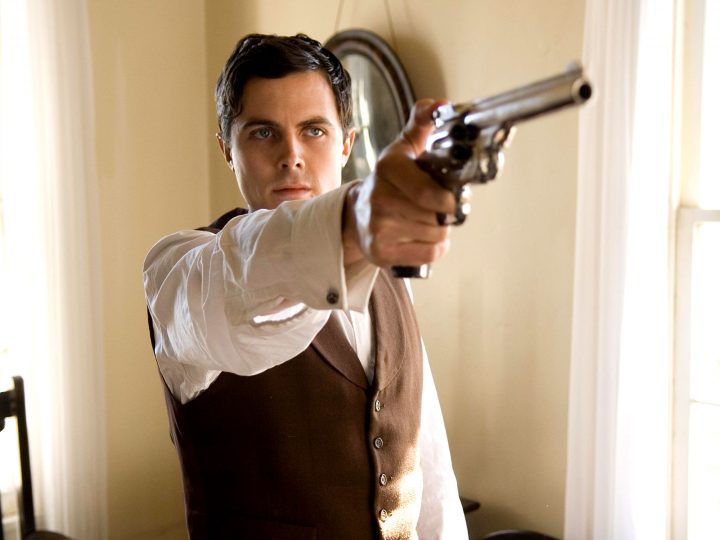 The film’s tone suggest that of brooding loss and tragedy, coupled with punctuating moments of brutal physical violence. There’s a lethargy to Andrew Dominik’s work here – the film’s original editor, Dylan Tichenor, left the project before completion, and was replaced with Curtiss Hansen, cutting the film’s 3+ hour running time down to a relatively brisk 2 and a half hours – suggests echoes of Terence Malick or even Stanley Kubrick, with a deliberately prolonged pace allowing the characters to really flesh out on the screen, and I think to a degree it works more than it fails. The storytelling mechanism works through an accompanying voice-over from what sounds like a forlorn cowpoke (actually voice actor and film editor Hugh Ross), giving us melancholy exposition and extrapolation of the characters and situations as they occur, a little like cutscenes from a videogame. It’s this sorrow-filled elegy that mitigates a lot of the film’s shock value (let alone the title giving away what happens) and I think as a device for propelling the drama it doesn’t work so well. The natural cadence of the film’s oft-prosaic lensing (by the tremendously talented Roger Deakins, DOP) accentuates the isolation these men feel in their own lives, their jagged history through American folklore etched indelibly though a soft colour palette and seemingly effortless Magic Hour production design. 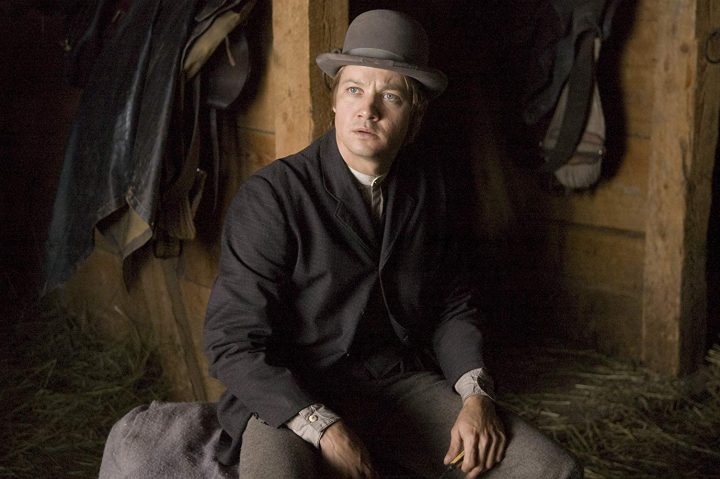 The film’s sombre aesthetic sits on the broad shoulders of Brad Pitt and the less-broad hunchback of Casey Affleck, who snivels his way through the film with an approximate level of snakeskin shedding devilry and eventual resigned desperation. Pitt dials his trademark crazy-eye antics way down but cannot avoid falling into his typical shtick, throwing his fellow actors awry with sudden bursts of behavioural tourettes that feels written for him specifically rather than being a natural progression of the real Jesse James. Thankfully, Dominik progressively shows the character mellowing a little, as he comes to accept the fate that awaits him: does Jesse James know he’s going to be killed? Does he accept that as an inevitability, or is he surprised? The film deliberates little on this point, with the titular assassination being a poker-tip jab at mythological construction, the tacit knowledge that a story’s continued retelling leads to embellishment and alteration that forms the spectral guilt haunting Robert Ford in his latter days. He goes from hero to cowardly assassin quite quickly, and the film’s downbeat denouement for the fate of the principal players almost can’t wait to be rid of them all; a tragedy more for the film than for Robert Ford himself. 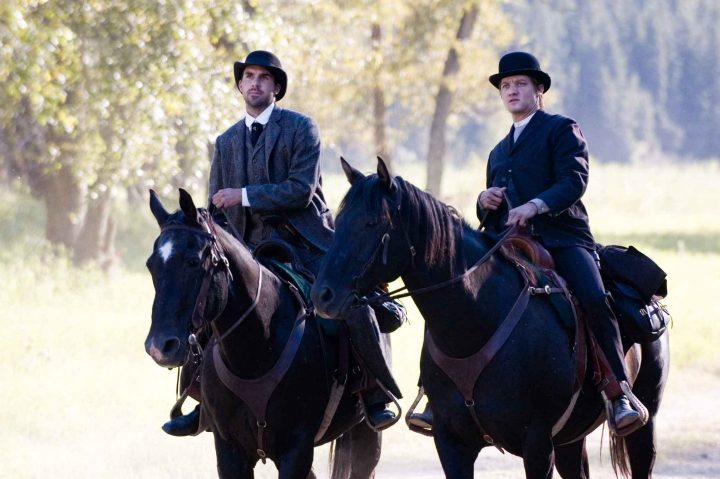 Affleck’s role as the killer among them is more a skilful ruse to fool us. The character’s personality feels weighted too far into idolisation, although Affleck’s performance and arc through the film is particularly moving. The consternation between early scenes with him trying to ingratiate himself to Jesse, and the climactic assassination itself and the tragedy of it unfolding, does pack a punch but Affleck’s delivery and emotive content isn’t the problem. Rather, it’s the lack of focus on Robert for much of the film’s ponderous middle act, and it’s here that the movie tends to wander a little too much. Contemplative ruminations on life, death and hero-worship can only support so much of a film, and after the umpteenth time at a dinner table or sitting at a window or riding a horse, The Assassination of Jesse James begins to feel more like an apology to the audience than a conspicuously pointed allegory on myths, but Dominik (or, rather, whoever edited the movie in the end) salvages things with a climax and resolution that works, even in spite of the utterly sad outcome. Affleck works wonders at times, maximising the fear and uneven affection he has for Pitt’s Jesse, and you can really feel his torment at betraying his friend, moreseo than the script can suggest on its own terms. The sly glance, the subtle half-smile, the nervous tics and apparent disdain for his own iniquity, Robert Ford’s relationship with Jesse James was far more complex than even this film can manifest, but both Affleck and Pitt do well to bring as much as they do. 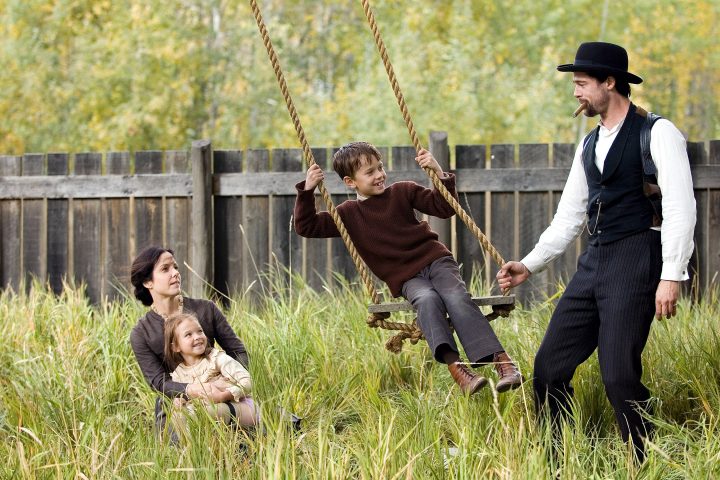 As much as that pairing on-screen is a delight, the film’s MVP surely has to be the eminently watchable Sam Rockwell, as Robert Ford’s dull-witted brother Charley. Rockwell once more charms the pants off the viewer with his engaging style, doing his best “could he actually be drunk?” routine once more and making the character feel real and inhabited, rather than a generic Western stereotype. For his part, Jeremy Renner acquits himself ably of the role of Wood Hite, a man who (compared to Renner’s marvelous role, Hawkeye) can’t shoot straight to save his life, but whom also feels legitimate within the world Dominik has painted here. Paul Schneider is utterly captivating as Dick Liddil, the Lothario-turned-gunman who has some of the film’s best lines. Other notable supporting roles include Sam Shepard in the brief role as Jesse’s brother, Tarantino-muse Michael Parks as a Sheriff who brings Dick Liddil in, and Mary-Louise Parker as Jesse’s cousin and wife Zerelda, balance out the inward-looking masculinity with a more traditional Western vibe, and who totally forgot that Zooey Deschanel is in this movie as well? Me! 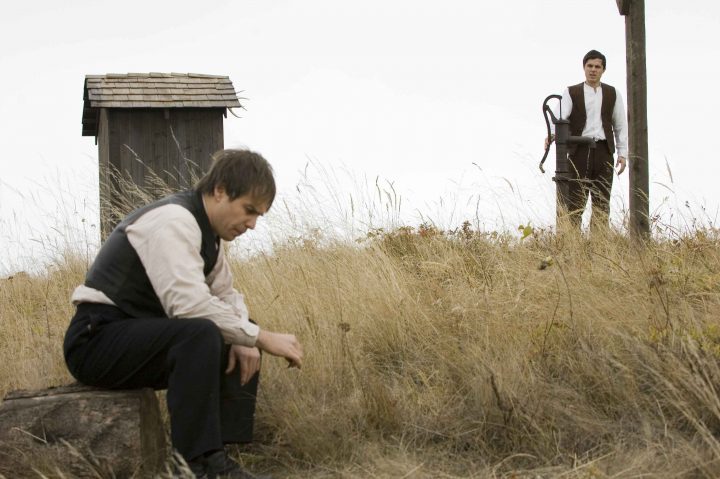 The Assassination Of Jesse James should also be remembered as one of Roger Deakins’ finest works behind the camera. I know people consider him to be the god of cinematography, and his body of work suggest that he is indeed working on a plane far higher than us mere mortals, but this film journey is a work of visual art. Every scene, every shot tells part of the story with colour and shadow, particularly an early train robbery sequence that contains some beautifully ethereal footage and some ghastly violence. The crisp landscapes used as backdrops for our characters, together with the cool vignetting of some shots to suggest old-time footage, as well as deep black shadows and silhouettes suggest fraying darkness of the soul, men as rugged and ragged as the land they walked hiding all manner of secrets in the places we refuse to look. There’s a lot of John Ford about Andrew Dominik’s style here, a lot of “looking through a doorway” shots, a la The Searchers, and plenty of Malick-esque through-window sequences of people just…. looking. Less traditional is the score by Australian musicians Nick Cave and Warren Ellis (not the comic book legend), the former of whom appears in an end scene as a minstrel singing the condemnation of Robert Ford post-assassination. The music accompanying the film’s visuals is atmospheric and moody, rather than purely thematic (at least to me), and although it’s hardly memorable from an iTunes perspective, in a positive note it accentuates and enhances the drama of any given scene. 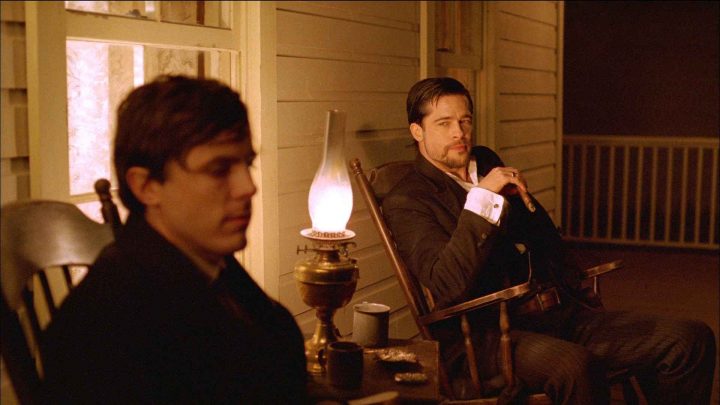 Andrew Dominik’s slow-burn dramatic Western may find some lost amid the consternation and overwrought brotherhood of outlaws, with its slow pacing and deliberate framework to operate within. For those willing to give the film its due, The Assassination Of Jesse James is a towering American classic, a classic Western and an outright masterpiece in unpacking the mythology of America’s formative pioneering days. With compelling lead characters, a superb supporting cast and production value that is pure cinematic art, Andrew Dominik’s film grips genre fans from the very first frame and, through sheer force of will, never lets go until the moving, despondent ending. It’s a film that dissects the genre in a similar way to Unforgiven, rerouting the cliches and stereotypes we expect and kicking over rocks to show us the worms beneath, whether we like worms or not.