Baby’s Day Out is the film best suited to encapsulating all things you’d describe as “hijinks”. A slapstick farce of a film set around New York City and featuring the a cast of the most impossibly blind supporting ensemble known to man, Baby’s Day Out was written by (of all people) John Hughes (yes, that John Hughes) and stars a tiny baby clambering all over the Big Apple without being spotted once. Startlingly insane, the film’s child-friendly motivations and Hughes’ playful sense of bodily injury has everything a young audience could ask for – and then some – and although it has moments of truly cloying sentimentality (it is John Hughes after all), Baby’s Day Out is an inoffensively amusing entry into a very small gene pool of comedic subgenre. 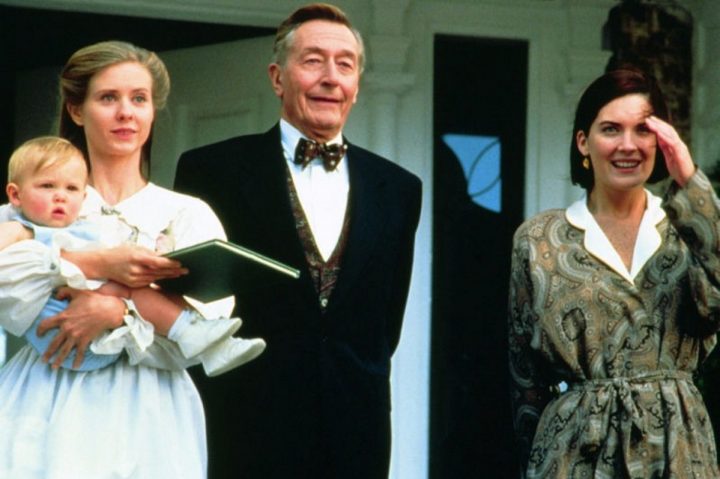 The inexplicably named Bennington Austin “Bink” Cotwell IV (a baby played by Adam Robert and Jacob Joseph Worton) is kidnapped from his loving parents (Men In Black 2’s Lara Flynn Boyle and The Wedding Singer’s Matthew Glave) and his doting nanny (Sex & The City’s Cynthia Nixon, sporting a truly dire British accent) by a trio of dimwitted criminals looking for a quick blackmail score. Eddie Mauser (Joe Mantegna – The Godfather Part II, Bugsy), together with his associates Veeko Riley (Brian Haley) and Norbert LeBlaw (The Matrix’s Joe Pantoliano) manage to let baby Bink escape into the sprawling streets of Manhattan; they follow, clumsily failing to snatch the child up as he follows a storyline from one of his favourite books, and continually outwits the idiotic trio through a series of violently dangerous vignettes, whilst Bink’s parents and the police (led by Fred Dalton Thompson’s incredibly deadpan Dale Grissom) follow up the clues. 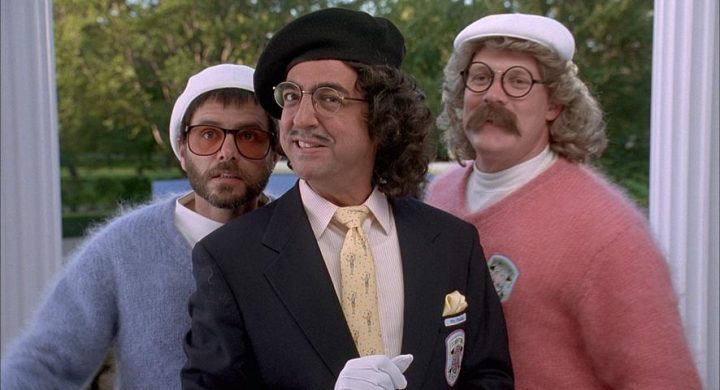 Baby’s Day Out is exactly like Hughes’ more popular cinematic venture Home Alone, only if instead of Macauley Culkin you had an even more infantile baby and instead of an enormous mansion you had the entire city of New York and instead of a duo of villains like Joe Pesci and Daniel Stern you had a trio of lesser character actors all mugging shamelessly for the camera. Filled to the brim with physical “comedy” equating to all manner of bone-shattering pratfalls, crashes, incineration and assault at the hands of a caged gorilla (yes, really), Baby’s Day Out ekes out simple laughs from adults and uproarious guffaws from younger viewers due mainly to its logic-defying (and utterly shameless) gags involving the adults being utterly outsmarted by a baby. Baby’s Day Out isn’t the smartest feature film you’ve ever seen – and there’s a reason the film bombed big-time in cinemas back in 1994 – but if you want the kids to enjoy a feature-length live-action Loony Toons cartoon with violent injury accorded to idiot humans then this is the one for you. 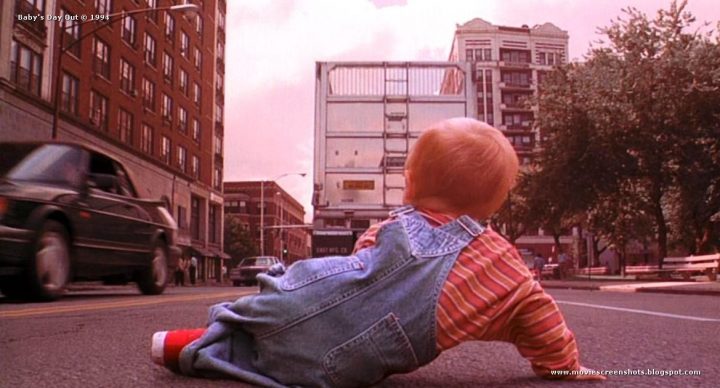 Hughes’ chose not to direct this film, leaving that chore instead to former ILM effects technician Patrick Read Johnson; Johnson’s work with a baby crawling the mean streets of New York City is commendably pleasant, the film’s frantic search-and-pursuit sequences allowing a number of “close call” and “baby in imminent danger” moments that work pretty well. A mixture of rotoscope and practical stunt work (interestingly, Austin Powers‘ Mini-Me, Verne Troyer, performed as the baby’s stunt-double throughout the movie) allow baby Bink to achieve seemingly impossible and implausible feats of survival against both gravity and other various laws of nature, all the while remaining apparently invisible to the denizens of the city through which he cavorts. While the baby clambers up enormous skyscraper constructions and into gorilla cages at the zoo with seemingly no ill effects, the core trio of villainous imbeciles undergo a variety of torments in the form of bodily injury, most notably to the personage of Joe Mantegna. 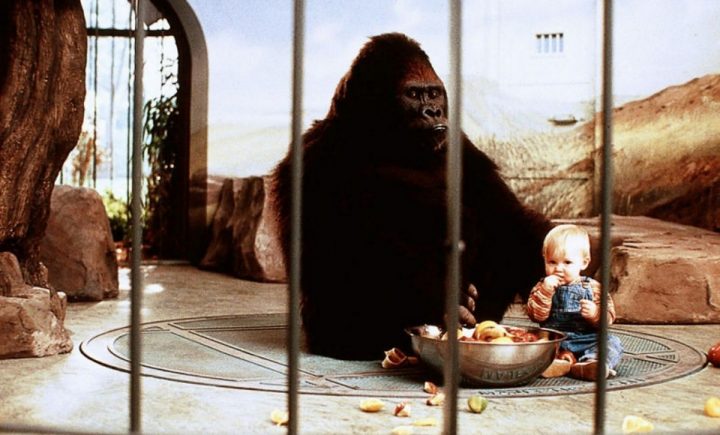 Poor Mantegna; he undergoes all kinds of physical assault during this movie, including having his genitals torched by a wayward cigarette lighter, his genitals crunched by an angry gorilla, and being absolutely sloshed by slippery construction goop high above the city’s skyline – among a variety of other pratfalls and injurious occurrences, there’s literally no way either Mantegna, nor his brave compatriots in Joe Pantoliano or comedian Brian Haley escape serious hospitalisation through the various things that take place, although they all seem to shrug it off like Bugs Bunny with a carrot. To wit: Baby’s Day Out is exactly like a live-action cartoon, and if you approach it as anything but, you’ll enjoy it not a jot. It’s a silly, piffling film this, a show for New York’s shinier “we’re not a murder capital” aesthetic as well as Hughes’ well-honed sense of cathartic juvenile violence, and aside from a couple of moments of parental angst (both Lara Flynn Boyle and Cynthia Nixon are horribly squandered in this movie) the film’s bubbly sense of inanity never really flounders. 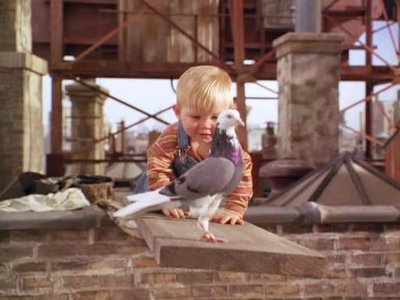 As much as I roll my eyes having to review dreck such as this, my kids absolutely love this movie; it’s currently on high rotation thanks to my daughter, who squeals with delight every time one of the villains gets hurt or suffers some physical indignity (which is to say, often), and I guess if that’s a measure of Baby’s Day Out’s success then this is a great film indeed. Sadly, as a grown adult, there’s a lot to detest in this film, from the casual violence and seemingly indifferent attitude to a child crawling through places no child should ever crawl though, and try as I might I couldn’t really see the film’s positives outshining the blistering deficiencies I spotted. That’s not to say it’s a film without purpose, because Hughes’ writing and Johnson’s clownish direction salvage a few decent chuckles if you’re a juvenile adolescent man such as myself. It’s a film filled with nutty conceits and preposterously unfunny vignettes of violence and physical pain, so if watching three grown men hurl themselves through cheap laughs and sightgags is your thing, have at it. Everyone else over the age of nine, you can avoid this one.