The director of the original The Fast & The Furious does his own variation on Twister – even down to the post-title “satellite orbiting America’s airspace” shot following a family tragedy cold open – and it’s both as hilarious and awful as you’d expect. Rob Cohen’s skill behind the camera kinda came and went with a 90’s flash that included Dragonheart and Daylight and he’s always been a man tapping into B-movie level storytelling that more often doesn’t work, sadly. The concepts behind Cohen’s films are solid, it’s the characters and scripting he shoulders them on that typically feel cheesy. The Hurricane Heist hits the perfect blend of cheesy; a preposterous idea mounted with square-jawed belief and Cohen’s quite solid visual style, and you have a stupid but hugely entertaining mix of natural disaster and man-made cornball fun.

On the eve of a Category 5 hurricane striking a small US coastal town (although the film actually was shot in Bulgaria), a town which just happens to have a Federal Treasury installation nearby, a gang of thieves hopes to break in and steal millions in soon-t0-be-shredded currency. The plan is not without problems, however, as local meteorologist Will Rutledge (Toby Kebbell – Rise of The Planet Of The Apes, Fan4astic Four), his estranged brother Breeze (Ryan Kwanten – Red Hill, True Blood) and Treasury Agent Casey Corbyn (Maggie Grace – Taken, Twilight Breaking Dawn) discover the ruse and attempt to prevent the heist of the century. 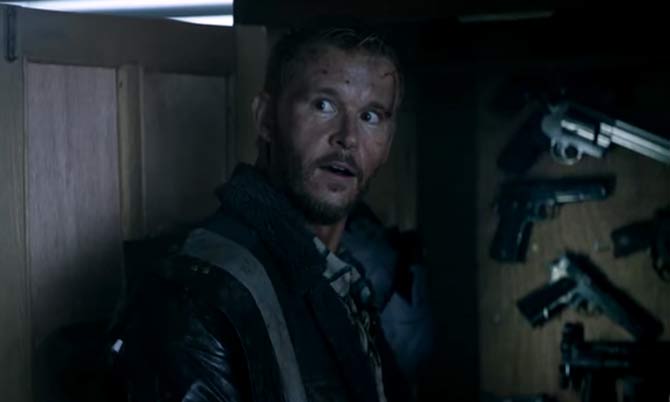 The Hurricane Heist is absolutely preposterous. It is literally one of the stupidest films I’ve ever seen, a generic Die Hard rip-off that gleefully abandons logic (the criminals use sleep darts to take over a Federal facility, why?) and reason or any semblance of characterisation and simply bludgeons the viewer with hackneyed tropes, semi-decent visual effects and atrocious, woeful acting performances. The film’s screenplay was written by two fellows named Jeff Dixon and Scott Windhauser, neither of whom know how to scribe actual human dialogue when they’re obviously more interested in postures on climate change and technical jabber-jaw pertaining the both the natural event and heist narratives, and it shows. Nobody in this film can salvage much from rancid lines of dialogue, no matter how good a performer they are – although Maggie Grace is a class act for making her role even halfway bearable. 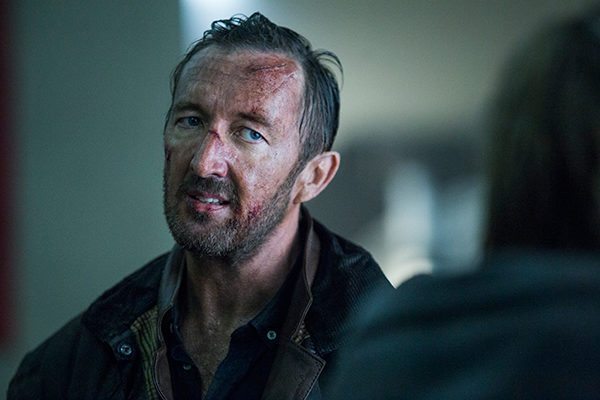 Toby Kebbell’s role as weatherman Will is as homogeneously stoic as any action flick hero, although his Gulf state accent is absolutely laughable, and co-star Ryan Kwanten, as the inexplicably named Breeze (what is that, some kind of stupid meta joke?) does his best Australian-doing-American despite limited screen-time and a hokey, hucksterish character; also, it’s really weird that every time Kwanten appears on screen, the musical accompaniment seems ripped right out of John Woo’s Broken Arrow. Screen villain Ralph Inerson (Game Of Thrones) plays the growling mastermind behind it all, a faux-military mindset behind his plans despite using two bizarrely omnisexual hackers (Ed Birch and Melissa Bolona) and the hapless town sheriff (current Bulgarian resident Ben Cross, obviously drawn to how easy it must have been getting to work – Chariots Of Fire). As the film progresses to its destructive zenith, with characters bathed in blood and sweat and the detritus of nature’s elemental strength, machismo and grandstanding become the order of the day.

Keeping this film from sinking into disaster-flick mediocrity, however, is the production value and Cohen’s direction, both of which feel bigger-scale than what they really are. The film decimates the American coast with an enormous hurricane, and the visual effects blend pretty well with the settings of flooded, ruined small-town carnage. Floods, tidal waves, impossible winds and structural collapse are archetypes of these kinds of films and Cohen weaves them all into the film as legit participants, the storm becoming its own character as it casts a shadow over the movie. When the film digs its action chops in it’s like a home-brand ballet of stunts and impossible feats of endurance, a stylish throwback to 90’s testosterone mixed with the slick post-modern vernacular of today, and at times will have you gripping your armrest with actual, legitimate tension. The whole thing concludes with a trio of trucks trying to outrace a hurricane down a highway that makes Fast & Furious 6’s ludicrous “plane taking off down a twenty mile runway” sequence look positively Frankenheimer-esque.

Gung-ho braggadocio is obviously mandated in cinema such as this, with the clutch of villains all having to meet a variety of violent, crowd-pleasing ends, and as much as he tries Cohen doesn’t quite manufacture the fun with that as I’d have liked. However. with a directorial style both fast and furious, Hurricane Heist’s predictable cliches and nonsensically scripted characters make for a popcorn-chewing great time with a truly terrible movie. For people who enjoyed Geostorm, this Rob Cohen blitzkrieg on sense and reason is a demonstrably awful film but hell if I didn’t have a great time with it anyway.