It’s a mystery. It’s a mystery exactly why this film was made, who decided it was a good idea, and exactly whom it was made for. At the end, it offers no discernible reason to exist at all, save for extending the careers of its top line cast for a brief period. A sequel to 2011’s Gnomeo & Juliet, this clash of cultural properties shouldn’t have worked at all, and yet intermittently becomes quite entertaining in a juvenile, time-wasting way; it helps that the soundtrack features a load of old Elton John songs remixed to sound cool and hip (both he and husband David Furnish are credited as producers) and the voice cast gamely throw themselves into it. It all just feels a touch too complicated to matter much.

Our favourite garden gnomes, Romeo (James McAvoy – Split, X-Men: Days Of Future Past) and Juliet (Emily Blunt – Edge Of Tomorrow, The Girl On The Train) have upped and moved to London with their formerly combative families (see the end of Gnomeo & Juliet for more…) and arrive in a garden that’s basically a dump. After their fellow gnomes are gnome-napped, the pair team up with resident super-sleuth Sherlock Gnomes (Johnny Depp – Alice Through The Looking Glass, Murder On The Orient Express) and his assistant Watson (Chiwetel Ejiofor – The Martian, Doctor Strange) to solve the puzzle of their disappearance. Is it the wickedly devious Moriarty (Jamie Demetriou), a pair of evil gargoyles (Dexter Fletcher) or something even more sinister? 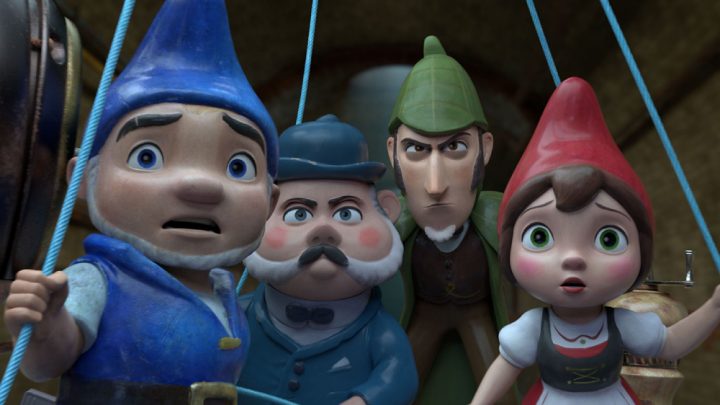 So if the first film was a riff on Shakespeare’s “Romeo & Juliet,” then this obvious pastiche of Arthur Conan Doyle’s eponymous literary detective is the world’s most tone-deaf follow up. Exactly why a franchise based on a one-note joke decided to transgress into another literary icon for the basis of its kidlet-friendly tomfoolery, I’ll never understand, but here we are. Replacing original director Kelly Asbury with Kung Fu Panda helmer John Stevenson, the producers of Sherlock Gnomes have removed the gently anarchic formula that worked in the first movie and replaced it with a baffling mixed-message metaphor here that doesn’t work at all.

Written by Ben Zazove, the film tries to swerve into the public consciousness of our infatuation with Sherlock Holmes and thrust inside of it the detritus of the previous film’s poetic fable ideology, as if the two conceits could ever mix. Given the core throughline here is that the characters are all garden ornaments, exactly how anybody thought a Sherlock Holmes knockoff would work baffles me. The dynamic between Holmes and Watson doesn’t deserve to be second fiddle in any film, and Sherlock Gnomes really makes a solid fist of making the story about them, which is confusing because isn’t this franchise predicated on the relationship between Gnomeo and Juliet? The sideswiping of their arc as a couple feels awkwardly cavalier as Depp’s deft detective archetype and his straight-backed friend set about stealing the film from the established characters. Why? I don’t understand. 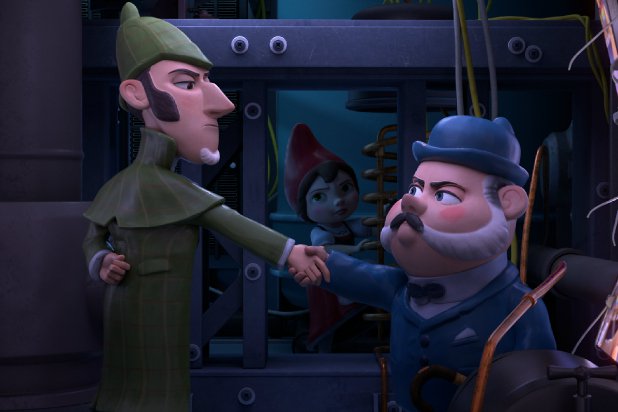 Another thing I don’t understand – and haven’t about this entire franchise, really – is exactly why they rely on Elton John songs to convey emotional beats within the film. Elton’s back-catalogue of music and tunes is not just plundered, it’s practically strip-mined in order to once more push the artist’s music to the top of the iTunes charts in a “hip, cool” way for the kiddies. How are we supposed to associate Elton John with gnomes? I know, having him as a producer must have made getting the rights to his music a hell of a lot easier, but where’s the link between John, Sherlock and the idea of sentient gnomes? Gah, this movie is rancid with questions that stink of creative malaise. Every chase sequence is accompanied by either one of two songs: “Saturday Night’s Alright For Fighting” or “I’m Still Standing,” while at one point Mary J Blige pops in as a contemporary take on Doyle’s Irene Adler character, and sings a brand new John song about female empowerment. This is all great and all, but I ask again: why? 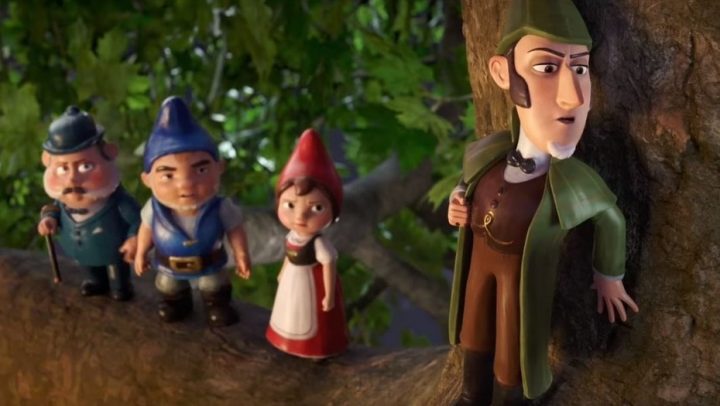 As you’d expect, the animation is slick and well executed, and the story moves at such a rapid clip the younger members of the audience won’t tire or want to skip to the toilet. I seem to recall a lot more fart jokes in the trailers for this than actually appeared in the final film, although there are a number of clumsy jokes for the adults that’ll have you eyerolling so hard you’ll see stars, if you’re not already cringing. The trailers’ most popular laugh-line, “No ship, Sherlock” has been excised completely, so you can’t even look forward to that. The characters’ penchant for glib humour isn’t a patch on either Pixar or Dreamworks, and the servile tone undertaken by the production becomes grating the further the film progresses. One of the film’s key plot twists can be spotted an absolute parsec away, and a second one stretches the limit in terms of gotcha-ing the audience. At least me, that is. I did, however, spot at least one reference that made me smile, that of a crate referencing Sherlock television writer and co-star Mark Gatis. Look fast for that one.

Sadly, while it offers tepid humour and a bubbly animation style, Sherlock Gnomes’ reason for existing continues to baffle. The funniest scene actually occurs at the very start, in which a trio of horny red gnomes list a bunch of possible sequels the filmmakers could have gone with – among them, Indiana Gnomes, at which I nearly spat out my fizzy drink – and from there it’s entirely downhill. Gnome humour and dizzy pop-culture hipsterness will only take a poor film so far, and by the time this thing erupts in the potential wholesale slaughter of dozens of kidnapped gnomes by the raising of London’s Tower Bridge, as well as a screechingly awful rendition of Moriarty, your tank will be empty and it’ll take no time at all to exit this franchise immediately. Garish, at times confounding, Sherlock Gnomes is a film without purpose offering a story without import through characters from a different movie.