No doubt a searing dramatic examination of counter-culture rebelliousness in mid-50’s America, today The Wild One finds itself a product of its time and sorely lacking grit or nuance enough to warrant significant inspection. This Marlon Brando starrer was banned in several countries for its depiction of wanton violence and social anarchy, and while relatively tame for today’s audiences would have been scandalous for the traditionalist western values the film attempts to undermine. There’s an obnoxiousness about The Wild One, a rampant sadism inherent in its motorcycle-gang narrative and Brando’s iconic look that defined an entire pop-culture movement and style (so much so it formed a template for the likes of Elvis and James Dean) yet the withering attempt to depict these thuggish, no-rules types as misunderstood draws little sympathy. 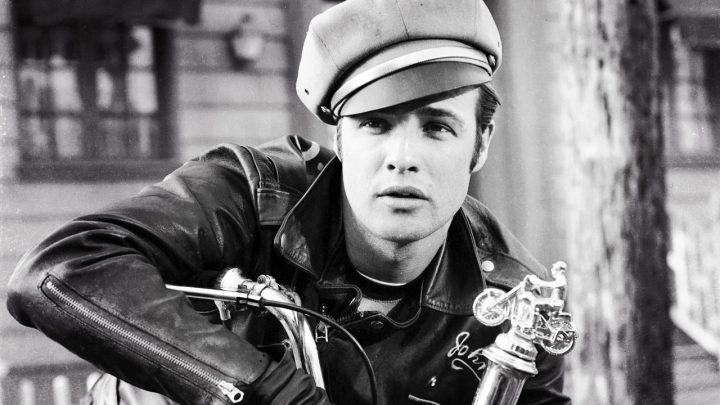 Brando plays Johnny Strabler, leader of outlaw motorcycle gang Black Rebels, who lands in small-town Wrightsville, California, after interrupting a bike race in a neighbouring county. The gang immediately begins to cause disruption and social unrest among the traditionally docile townsfolk, while Johnny forms a relationship of sorts with the daughter of local ineffectual police chief, Harry Bleeker (Robert Keith), Kathie Bleeker (Mary Murphy). When one of his crew is injured in a prank, Johnny orders the gang to remain in town, something most of the residents do not like, while local barkeep and hotelier, Harry’s brother Frank (Ray Teal) suddenly finds the influx of cash and business rewarding. Eventually, the pranks and tension within town threaten to bubble over, with a tragic accident bringing a confrontation to a head, and threatening Johnny’s lifestyle on the road. 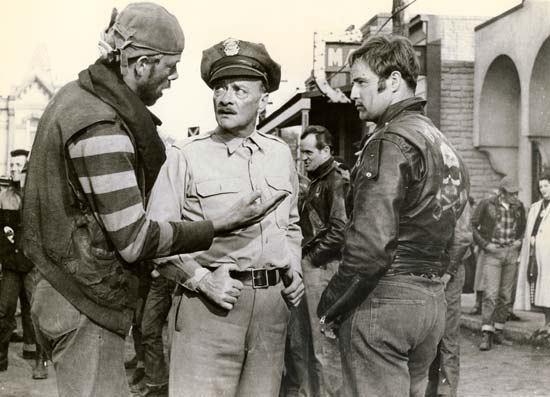 The first film of its kind to tackle the then rising wave of motorcycle gang violence across America, The Wild One immortalises Brando’s sideburned recalcitrant Johnny with a silently muscular tone within a sweaty, heated cauldron of tension. The film contrasts the youthful antagonism of repressed youth of the era with the steadfast Pleasantville-type social uprightness espoused by the townsfolk of Wrightsville, an edgy, influentially iconic clash of ideologies that sway heavily in favour of the bikers. The premise is based on an infamous motorcycle rally in 1947 that encapsulated the disenfranchisement of middle America and translated into a sense of bohemian freedom on two wheels, and The Wild One’s story attempts to juxtapose this feeling with simplistic authoritarian villains. 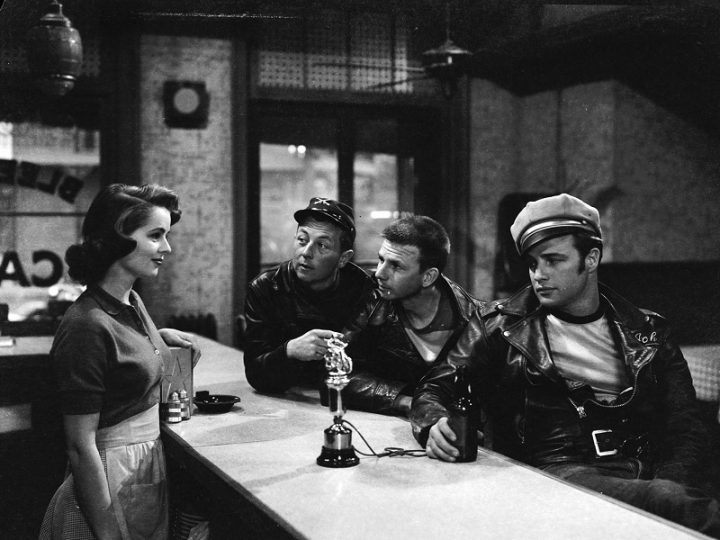 Written by John Paxton and Ben Maddow, the film’s dialogue is littered with pointed comments about where America was headed (or had been), with Brando barely troubled by the inward-focused character he’s playing. While the film makes much of the gang’s devil-may-care attitudes to conformity and ethical behaviour, it doesn’t seem to offer an opinion on them other than that this underclass of vagrant gangs wouldn’t cause so much trouble if they would all just “talk it out” – as naive as that seems, The Wild One isn’t so much wild as it is simply sad. A generation of aimless young folk, with nothing left to discover and even less to care about might be a hot-button issue in any other film but this movie can’t really evolve its examination beyond a plodding series of vignettes in which they terrorise and antagonise the town’s residents. I’m sure these sequences are meant to instil anger in middle-class audiences, and send the younger viewers into rhapsodic idolisation of Brando’s no-fucks-given biker dude, but the film’s age and year of creation causes a distinct lack of bite to what could have been a remarkable preamble to the 60’s and 70’s counter-culture movement. 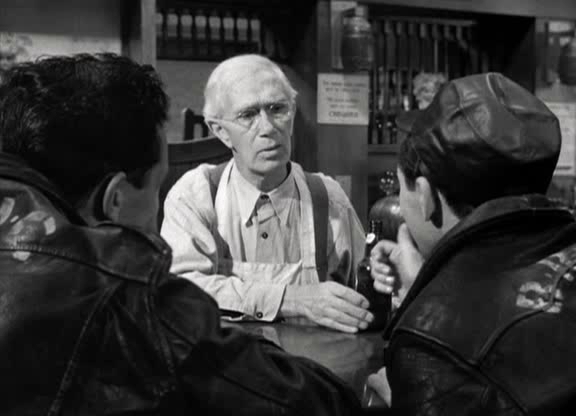 Brando exudes physicality here, as he did for much of his early career, his steely-eyed Johnny maximising screen stature through sheer magnetic masculinity. Brando’s hidden anger simmers beneath the surface; some of his character’s actions here, his virtual assault of Mary Wright’s innocent Kathie later in the film and the biker’s continued animalistic attacks on the town’s fairer sex are crudely designed to inflame, and do so really well. Wright plays the doe-eyed Kathie Bleeker well, conflicted in her immature feelings for the wrong-side-of-the-tracks Johnny, who she sees as a way out of the small-minded town she lives in. Johnny’s brute force, however, scares her, creating within the film a conflict of being trapped in a world she despises or escaping with a man who terrifies her. I found the chemistry between Brando and Wright sorely lacking, however, and Wright’s ability to match Brando’s charisma nigh indifferent. 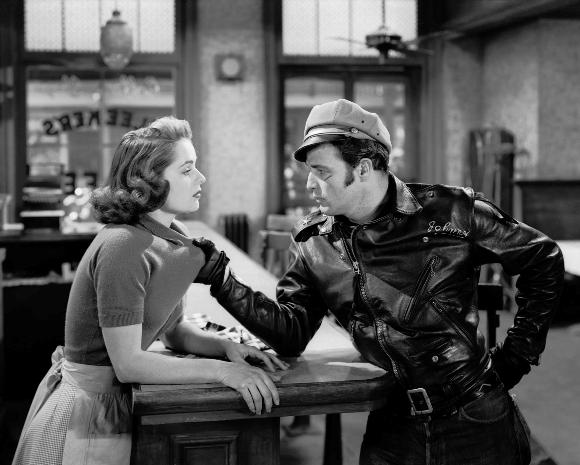 The supporting cast feels like somebody slammed Grease and Rebel Without A Cause together and The Wild One is what came out. Brando and his gang are an obvious genetic ancestor of John Travolta’s T-Birds in Grease, although swapping out cars for bikes, while Wright’s Kathie Bleeker is an early progenitor of Olivia Newton John’s Sandy – only here, Sandy doesn’t whore herself out to her man by the end credits – with the rest of the film’s townsfolk representative of Grease’s teachers fraternity in some form or another. Robert Keith’s pacifist police officer is one of the most disappointing aspects of the film, in my opinion; not so much for the way Keith portrays him but for the fact this element of social shift – the old versus the new – is the most interesting but largely underdeveloped. Lee Marvin bobs in as another biker gang leader, looking for all the world like a drunken sailor with anger management issues, while Jay Flippen shows up towards the end to investigate the gang’s activities when tragedy strikes. 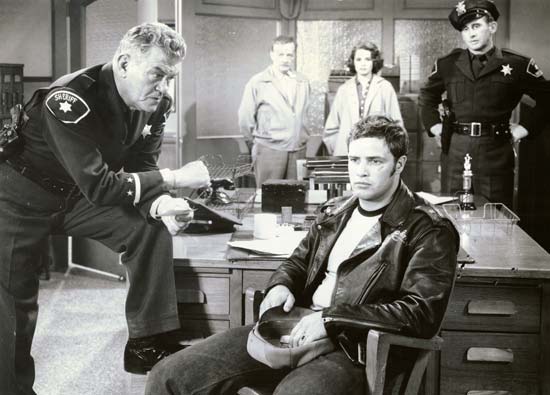 The Wild One isn’t a total loss: Brando’s performance and Hungarian director Laszlo Benedek’s (Death Of A Salesman) work in keeping this socially relevant film compelling are worthwhile if limited by production codes and period-era film-making styles. There’s an ambitiously scabrous flavor to the film, a testosterone-driven anarchic sub-narrative at work here that didn’t strike a chord with me (it may you, however). Although several of its themes of being an outsider or sticking it to the man remain as true now as they did back in the 1950’s, The Wild One’s sparse motivational dramatic heft and indifferent consequential outlook makes for dry viewing indeed. The film feels like it should have been a powderkeg of social punch, yet by today’s standards kinda never quite makes it.