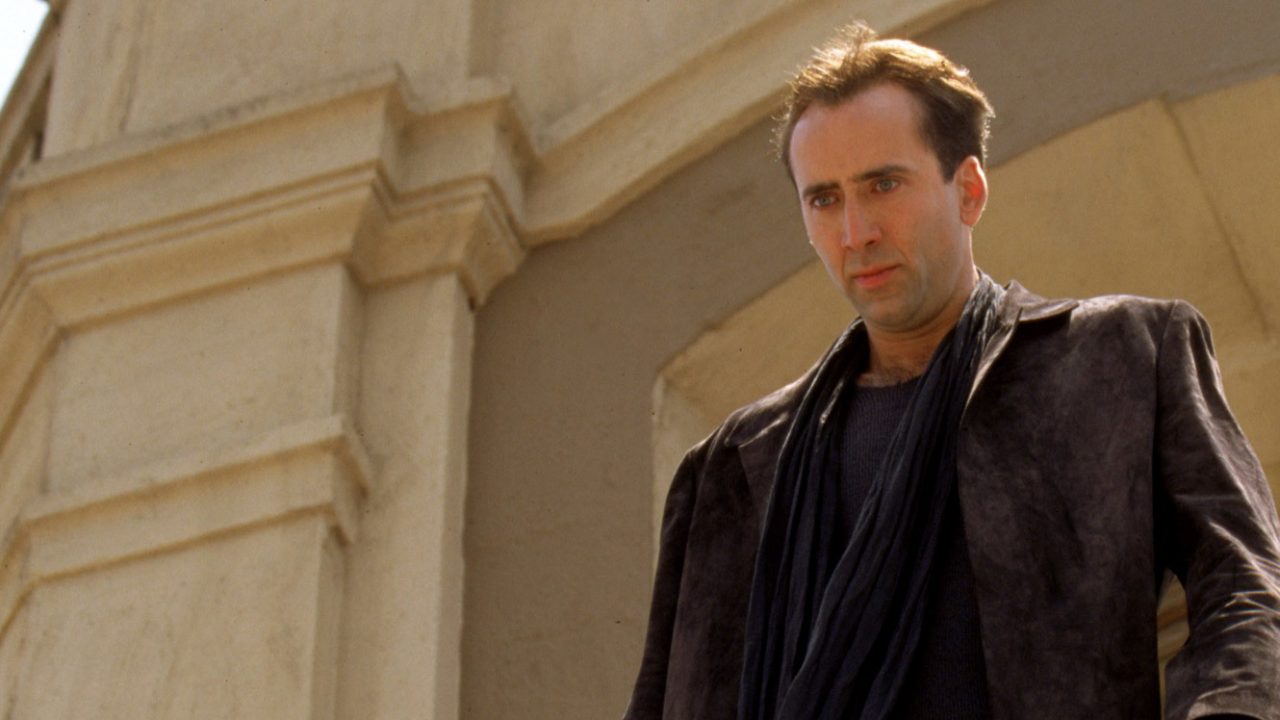 City Of Angels came out at the back end of the 1990’s, a decade that was immensely good to Nicolas Cage (and us, really). The actor had a knack for picking dynamic and interesting roles, from Oscar-winning turns in Leaving Las Vegas to crowd-pleasing junk cinema in Con Air and Face/Off, and naturally his face on a poster sold tickets. It’s shocking to revisit City Of Angels today and discover, in the midst of blockbusters and dramatic success, the film is absolute trash. Brad Silberling’s remake of Wim Wenders’ Wings Of Desire is a mawkish, sentimental, hopelessly insipid romantic fantasy that pits a surprisingly charisma-free Cage and the always watchable Meg Ryan in a film that skirts religious controversy and settles for simplistic, coloured-in-crayon claptrap that ultimately lacks any fulfilling qualities.

Cage plays Seth, an Angel of Heaven, who spends the aeons watching humanity and guiding the recently departed into the afterlife. One day he sees heart surgeon Maggie (Ryan) mid-surgery and falls in love with her. Stalking her as she considers the advances of a fellow colleague (Colm Feore in an unforgiving role), Seth yearns to be able to feel things the way humans do – as an angel he cannot taste, feel or smell anything, only existing to watch and offer magical powers to comfort those in duress – and when he meets curmudgeonly angel-turned-human Nathaniel Messinger (Dennis Franz), he realises that true love is well within reach. 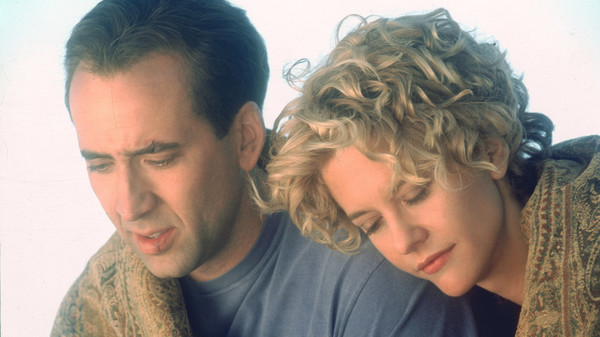 The irony of a film set in Los Angeles and called City Of Angels because of all the angels is not lost on me, but it’s stupid as hell. The film’s ponderous, faux-stateliness is stale and derivative, the direction borderline competent, and the story…. well, as much as I’m a sucker for romantic bullshit, this film is just shit. The ideas within City Of Angels aren’t small things, either, with its sideswipe of theology and toe-in-the-water faith-driven narrative, but you get the sense that both Silberling, and writer Dana Stevens, absolutely avoided as much of the god-talk as they possibly could get away with, and it shows. If you’re going to have a film in which angels exist, you have to at least acquiesce to the point that god also exists (whether you believe it or not) and City Of Angels inexplicably removes all but a single brief mention of the Big Guy above. The concept of an afterlife and the angels’ stewardship of humanity is crucial to the choice Seth makes towards the end of the film to (spoiler) become human, but the emotional resonance of said choice lacks conviction simply due to ambivalence towards a Christian ideology. I’m also reasonably sure that the film’s idea that angels guide everyone, whether they’re Christian or not, into heaven, kinda goes against biblical teachings. After all, you don’t see anybody descending to the flaming chasms of hell in this film. 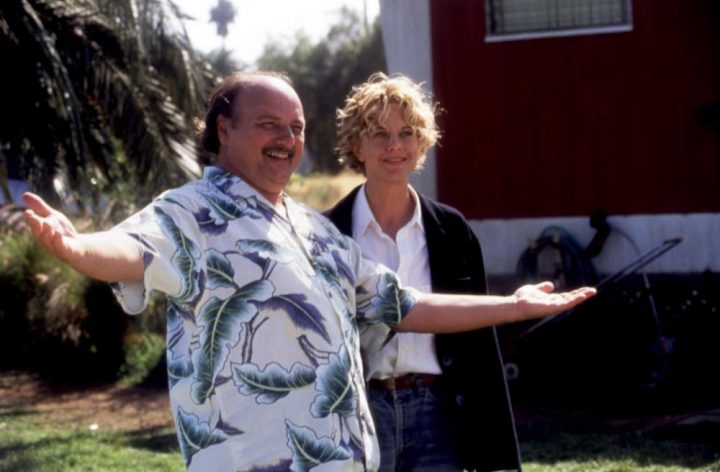 Even pushing the thematic ideas to one side with the brusqueness of Stevens’ screenplay, City Of Angels’ romantic escapism is maudlin and often condescending. Cage’s Seth is an early stage take on Cage’s patented “sadface” expression, whereby he meanders through this tripe with the look of a man about to lose a testicle in an accident. His character’s continued sense of mournfulness is difficult to swallow, the pretence being that he wants to feel what humans feel, but cannot, with Cage trying as hard as his Oscar-winning screen persona can muster. Seth is a nothing role, a blank slate of confused perplexity, inadequately written to maximise romantic tone, and there’s little Cage can do except look continuously forlorn throughout. Meg Ryan’s Maggie, meanwhile, seems complex but really isn’t; her character ineptly described as some kind of medical professional on the cusp of falling apart following a tragic death, but who really is just a thinly written romantic interest for Cage’s character. Ryan’s All-American persona is smothered by destitute solemnity, her allure tempered by Silberling’s trenchant desire to labour through the sodden plot with heavy-handedness and a perplexing ill-tempered pace.

About the only shining light to City Of Angels is Dennis Franz, as the garrulous Nathaniel, a former angel turned human who extols the angst and fascination of humanity with a glint in the eye and a sense of internal sadness at all he’s given up. Franz isn’t in the film anywhere near enough, and the screen lights up whenever he’s there – alongside Cage and Ryan, he’s positively radiant. He’s certainly the best character in a film filled with melancholy.

The film’s central premise, that an angel can fall in love with a human, and consequently make the decision to “fall” to Earth and become human in order to consummate the relationship, is wishy-washy romantic pap of the highest order, and the film’s idea that a woman’s perfect man simply has to be heaven-sent is trite and arguably derogatory, even when it’s handled as poorly as it is here. There’s no sense of supernatural fun here, no sense of romantic intent; Cage’s Seth feels like some drab, gothic stalker than he does a potential love interest, while Maggie feels out-of-place in terms of her bubbly personality in a drab, grey world. Los Angeles itself looks positively monochromatic, a sepia-toned, concrete pad of faceless denizens and suffused with the occasional blip of orange sunset tint. The whole film feels mismatched somehow, as if the pieces of its puzzle don’t end up making the puzzle, and the technicolor finale never quite finds the zest the occasion demands. The few visible visual effects are well achieved, although Silberling largely takes a minimalist approach to depicting the supernatural-ness of Cage and his fellow Angels. Heck, even the soundtrack, once a stalwart of the ’98 radio playlists, feels like it’s grief-stricken, a wailing clash of sorrow and heartbreak to really drag down the mood.

City Of Angels is hopelessly cloying and far too melancholy to make for compelling romantic dramatics. It’s a turgid slog of a film, a film trying to be hopeful and uplifting but being resolutely neither in spite of Cage and Ryan’s antics on the screen. Brad Silberling’s sombre direction and the pastoral pacing don’t assist either, and in the end City Of Angels’ tragic love story is overwhelmed by flat characters and a screenplay that never approaches the material the best way. City Of Angels is tedious, laboured awfulness.