On the sliding scale of animated films, there’s a consensus between the vast majority of people indicating Pixar as the preferred studio of choice when it comes to quality and consistency. Disney Animation (behind Frozen, Tangled and most recently Moana) would run a close second, followed (you’d think) by whoever greenlit the How To Train Your Dragon franchise. Dwelling somewhere south of Shark Tale and the scum suckling endurance test that was Hoodwinked Too and The Nut Job (not to mention the Planes movies), The Emoji Movie nestles amid the dreck, content to drizzle its iniquitous toxicity across the malleable minds of young children everywhere. Content to exist solely as a reason for parents to ban their kids from owning a mobile phone, The Emoji Movie is a bedazzlement of gorgeous design and animated visual intricacy, but aside from trying way too hard to be Pixar’s Inside Out and Disney’s Wreck It Ralph (kinda) there’s a repetitive dullard humour here the film simply can’t shake. 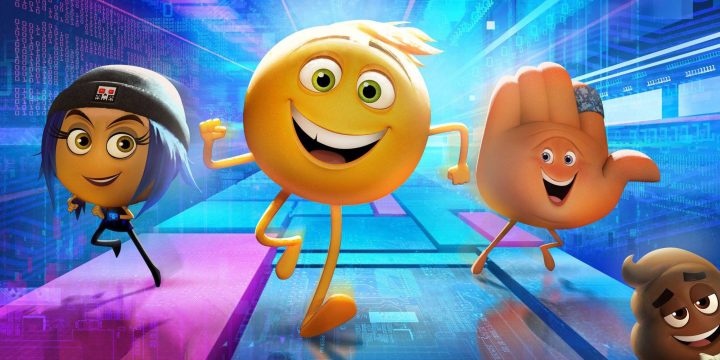 Inside the smartphone of Alex (Jake T Austin) exists a microcosm of sentient technology, primarily the device’s messaging app in which a thriving mtreopolis of emoji denizens enjoy everyday life fulfillling one basic function – to provide accurate emoji representation at Alex’s every whim. So when malfunctioning “Meh” emoji Gene (TJ Miller) accidentally starts a chain reaction which sees Alex want to have his phone wiped, thus begins a cross-phone trek for Gene, a Hi-5 emoji (James Corden) and a hacker named Jailbreak (Anna Faris) to a mysterious place known as The Cloud, where Jailbreak can restore Gene’s original “meh” programming and save the device.

The Emoji Movie is predicated on a single, sledgehammer-delivered joke: that our phones contain a plethora of sentient creations designed to make our online lives easier. The film contains a fairly clever Wreck It Ralph-styled dynamic between phone user and inhabitant, as Alex’s romantic interests to fellow classmate Addie are frustrated by his consistently malfunctioning device, while Gene (the Ralph in this story) attempts to thwart his very nature to try and please others around him. The quest narrative plays out a lot like you’d expect, with a variety of app jokes (including a feline gag involving YouTube that’s definitely worth a chuckle) and smartphone structures (the pathways between apps exist on “The Wallpaper”, naturally) meaning tech-heads will enjoy the subtle (and unsubtle) nods to how phones typically work, in a very Tron-like manner. It’s so layered on, you can almost feel the writers all three of them) virtually nudging you through the screen (or would that be one of those old Facebook pokes?), and as the character byplay and enjoyment of seeing your microcosmic phone apps come to life (Candy Crush must have paid a fortune to be involved here) wears off, the film’s generic ideas and formulaic plot twists unravel faster than a battery on 1%.

The film is pleasant enough if you’re an undemanding viewer – so kids, basically – and as an adult critiquing this thing it’s easy to see the whole premise is designed to sell product and gets kids hooked on their phones. Casual fun-poking at phone culture occurs early in the film before things get all serious, as if the filmmakers were trying to ensure we realise it’s not all fun-and-games, but there’s too much effort trying to make us gawk at the next clever representation of an emoji (or troll, or spam, or poop, or malware, or whatever) to make us care. Gene’s a bland, trying-to-impress-his-parents type, beset by the shadow of success and an inability to step out on his own, while Hi-5 is simply there for the comic relief. Anna Faris’ Jailbreak (the Glitch of Wreck It Ralph in this movie) is entertaining enough but nowhere near developed enough for us to really involve ourselves with. Even the film’s villain, a Smiley emoji voiced by Maya Rudolph, feels too derivative, unable to cajole even a grin from me at times when the film desperately needed it. 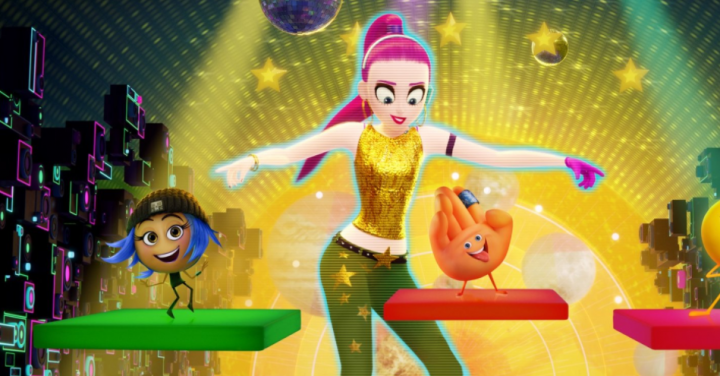 The film’s jokes are typically dull, witless things that slap you across the face rather than stimulate the intellect. Hearing Patrick Stewart give voice to the Poop emoji is cringeworthy, ameliorated only by his limited opportunity to do so. Steven Wright’s patriarchal Meh emoji, Gene’s dad, is fun, while popstar Christina Aguilera drops in as the central avatar of a dancing game app, albeit without hardly singing a note. There’s a smattering of guest voices popping in as minor cameos, but none offer any real laughs as the film’s lowbrow humour writhes to a collection of sight gags and indifferent one-liners. The humour is often wrapped up in the admittedly gorgeous animation – the film looks astonishing, and boasts plenty of dynamic sequences of action that will enthral children and some adults, which is like wrapping a trashy romance novel up in the artwork of Michaelangelo; nobody wants that.

Look, there’s plenty worse films out there than The Emoji Movie, and I’m damn sure there’s better ones. This film isn’t the absolute trainwreck you’ve been led to believe, it’s got some stuff here worth looking at. But like its Troll brethren before it, a film entirely set around a single pop culture reference lacking either heart or soul or that intangible magic of cinema is never going to go well. The Emoji Movie is a film in which you can see the plot coming beforehand, you can see where things are going to go, you can guess most of the jokes before they happen, and worst of all, you just don’t care either way. This film will entertain the easily amused, but those seeking quality storytelling and memorable characters and/or writing will be best served going elsewhere.