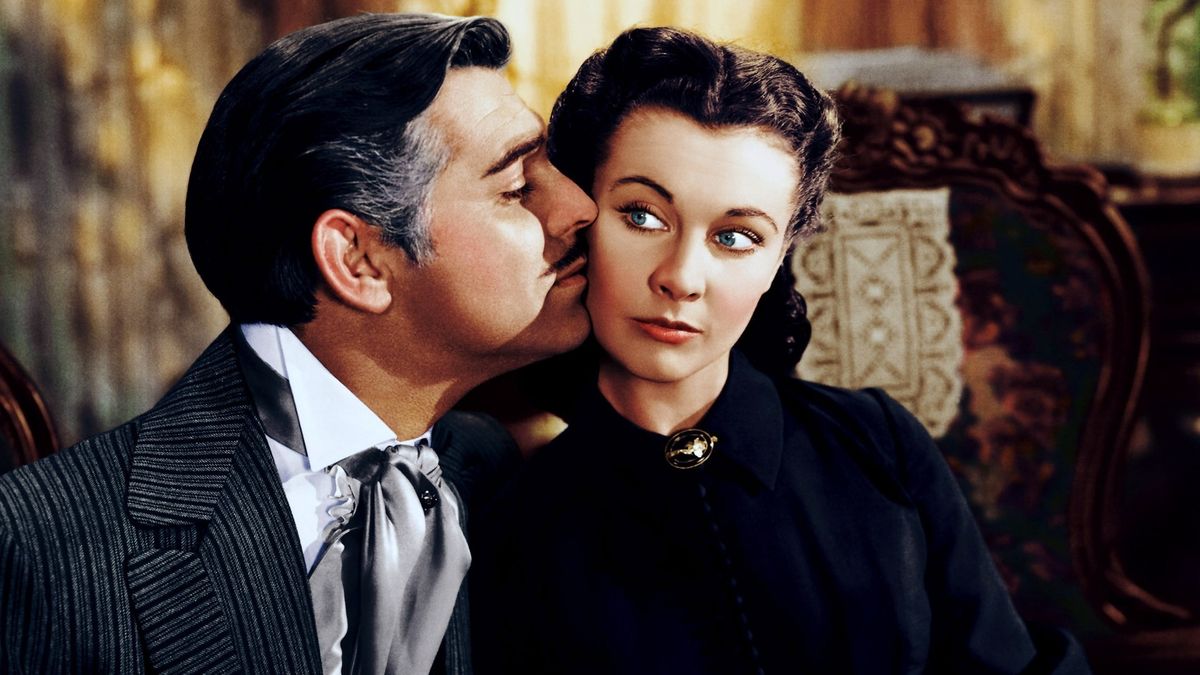 Few films in Hollywood history compare to the sprawling, legendary, mythic nature of Gone With The Wind, Victor Fleming’s four-hour saga of America’s deep south, and with the exception of Ben Hur and Titanic, is among the most successful at the Academy Awards, snagging 8 competitive gongs as well as two honorary ones. Lauded on release, and in the decades since, recent social renovations towards its appraisal – most notably here in my own article from September – have prompted a re-evaluation of the film’s distinguished pedigree. It was pure fluke that the film was next in my list of Best Picture winners to review at the time I wrote the aforementioned article. It is also a significant number of years since I last saw the film as a child, in any form whatsoever, so my mature critical eye would essentially be approaching this one for the first time; would the film hold up to its status as one of Hollywood’s most revered films, or would it feel awkwardly out of time, a bygone era supplanted by progressive thinking? 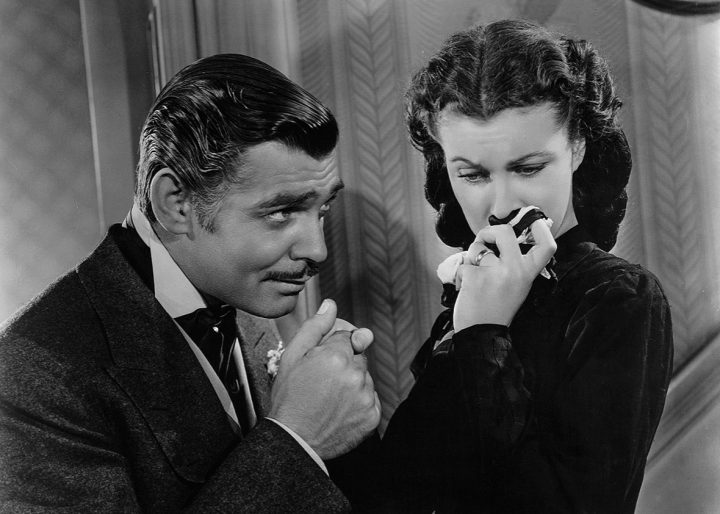 Manipulative daughter of the deep south, Scarlett O’Hara (Vivien Leigh) spends her time angling for the attention of her plantation brethren, particularly the handsome Mr Ashley Wilkes (Leslie Howard), coming across as a bit of a slut, while her sisters and other belles look on in dismay (and disgust). Scarlett is desperately in love with Ashley, despite his adoration for Scarlett’s cousin Melania (Olivia de Havilland), whom he marries before enlisting with the Confederate army. One evening Scarlett meets the laconic Rhett Butler (Clark Gable), who sees through her flirtations and tells her how it is; although pining for Ashley Wilkes, Scarlett begins to fall for the rigidly unwavering Rhett, and as the American Civil War rages on and the horrors of conflict threaten to destroy all that the young woman knows and loves, her strength and endurance remain rock solid.

“No, I don’t think I will kiss you, although you need kissing, badly. That’s what’s wrong with you. You should be kissed and often, and by someone who knows how.” – Rhett Butler

There’s few arguments that Gone With the Wind represents opulent Hollywood at its storytelling peak. Lavish production values, a popular literary foundation (the film is based on Margaret Mitchell’s enormously successful 1936 novel) and sterling casting ensure the film’s pedigree as a production remain key to its success. Although Victor Fleming (The Wizard Of Oz) is credited as the sole director, the film as worked on by no less than three across its lengthy production; George Cukor was fired weeks into principal photography, while regular MGM helmer Sam Wood (A Night At The Opera, Goodbye Mr Chips) stepped in for three weeks after Fleming was forced to take a break due to exhaustion; you can’t really tell who shot what, which is significant, and it’s testament to the film’s longevity that it feels as cohesive as it does, in spite of its gargantuan running time. Shot in spectacular technicolor (the first colour film to win Best Picture), cinematographer Ernest Haller accentuates the richly textured set designs, locations and backlot locales with soft brown hues and stark primary colours throughout, a truly remarkable photography feat indeed. 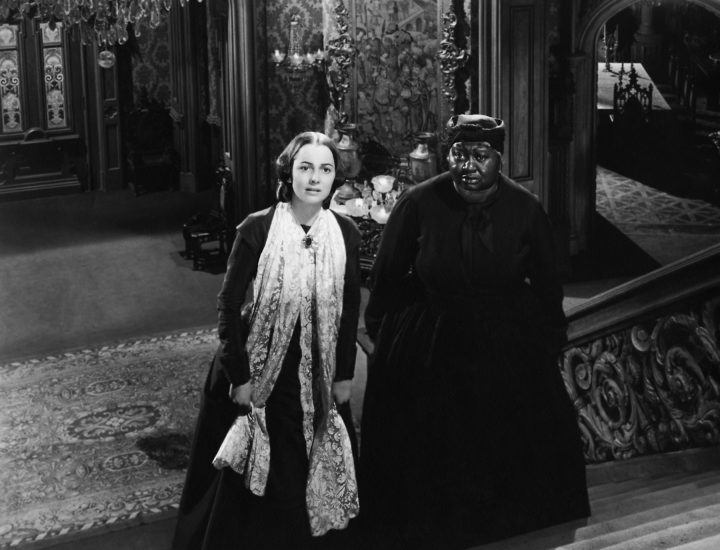 There’s discussion about Vivien Leigh’s performance of Scarlett O’Hara, her casting the result of a lengthy audition process and talent search involving hundreds of actresses, and it’s resonance through the years as a magnum opus for female roles since. The role of Scarlett is one of initial bafflement and frustration: frankly, her character is written in such an insolent, whippet-minded manner it’s a wonder audiences weren’t throwing their popcorn at the screen in disgust. Scarlett’s treatment of her family, her arrogance and sense of entitlement is truly ghastly, and although Leigh displays a steely-wiled resolve to commit to the part, the film’s focus on her as the central character with such awful tendencies is, at times, tough to negotiate. Hidden behind the thoroughly antisocial nature of Scarlett’s early behaviour, and thrust to the forefront when the Yankee army razes Atlanta and Scarlett’s plantation home “Tara”, is an iron-willed resolve. Fleming, who quarrelled with Leigh throughout the production so much that the actress had to be secretly mentored by previous director Cukor, teases out Scarlett’s maturity from her coquettish adolescence, forcing her to acclimate to a changing nation by changing herself, and it’s in the latter half of the film that the actress – and character overall – finally blossoms into the iconic screen heroine people talk about to this day. 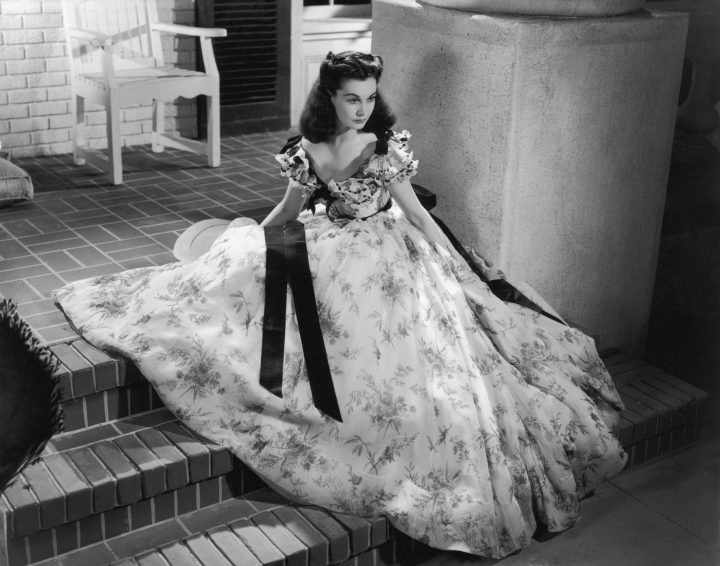 Of course, Leigh is supported by a clutch of superlative performers all in a variety of roles, notably Clark Gable as Rhett Butler. Gable, in the role which would come to define his legacy as a screen legend, never seems to be acting at all in the role, offering a naturalness and roguish glint in the eye to go with his mustachioed good looks. Watching him deliver dialogue is never a chore here, the man simply oozes chemistry not only with the camera but his on-screen romance in Leigh. Their whispered exhortations to each other are breathless and fragrantly delirious, against the backdrop of war and bloodshed (which isn’t shied away from, what with the inclusion of an enormous visual set-piece in which countless bodies lie along the Georgian railway yard in a jaw-dropping depiction of war’s utter carnage) and Gable, while being the stronger actor of the pair, is hypnotic. He just gets the part, and never once did I not believe what he was saying. 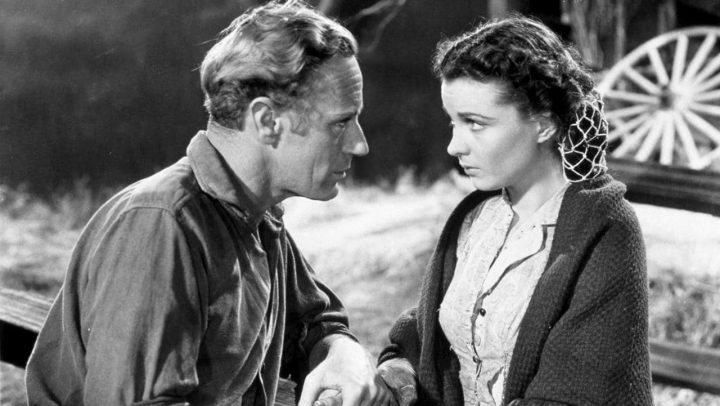 Alongside Gable is a young Olivia de Havilland, as Scarlett’s cuckolded cousin Melanie. de Havilland never really settles into the part with any sense of memorable elegance, reduced a lot of the time to cutaways and whiny, needy, sickly sidebar subplots, while her on-screen husband, Ashley Wilkes, is portrayed by the wonderful Leslie Howard (The Animal Kingdom, The Scarlet Pimpernel), a man caught between loyalty to his chosen bride and his lust for Scarlett’s beautiful embrace. Although the Melanie/Ashley plot is crucial to Scarlett’s relationship with Rhett, the dynamic between de Havilland and Howard is never really developed beyond cursory engagement, leaving a lot said (and done) off camera, which was a large annoyance to me. 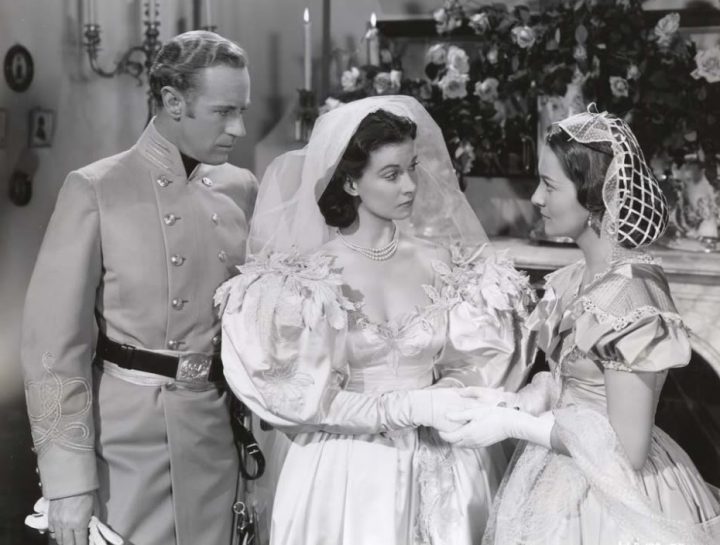 Secondary roles to the likes of Hattie McDaniel, who won an Oscar for her turn as Scarlett’s maid Mammy, Harry Davenport as one of Atlanta’s few medical doctors during the war, and Butterfly McQueen as a slightly dimwitted slave of the O’Hara family, are worthwhile (although McQueen’s role is egregiously annoying with her shrill voice and clumsy performance style), while the multitude of talent here includes future 50’s Superman actor George Reeves, Ona Munson, and the hilarious Laura Hope Crews as the flustered Aunt Pittypat, in minor roles. Gone With The Wind is a film that personifies Hollywood excess, with literally hundreds of extras embodying various members of both the Confederate and Yankee army, as well as the denizens of both the plantations and the city of Atlanta. Today, these vast crowd sequences would be aided by computer graphics, knowledge which only goes to highlight how incredibly creative filmmakers of the day had to be to achieve similar visual feats. Also worth noting about the film’s blockbuster feel is its considerable use of matte paintings to achieve a variety of epic landscape shots, including the central “Tara” location and some high angle cityscape footage. Truly, Gone With The Wind lacks not for spectacle.

“You’re not worth $300. You’ll never mean anything but misery to any man.” – Rhett Butler

Of course, no critical evaluation of Gone With The Wind is complete without discussing its racial themes, not the least is its homogenised ideal of slavery. The film never disputes that slavery existed, but some have stated that the film “glorifies” it, turns it into some kind of noble profession rather than a trial of human bondage. After viewing the film with a more mature eye, I’m loathe to suggest the film delights in its depiction of slavery and racial prejudice – Gable’s character refers to Butterfly McQueen’s character as a “simple-minded darkie” which is appalling to our ears now, and is obviously racist – but you do feel that there’s never a sense of unease towards the white treatment of black Americans in such a manner. Truth be told, I think the film takes an incredibly short-handed approach to the subject, using broad stereotypes to give information 1930’s audiences could understand without asking them to really reflect on the film’s underlying darkness; Hattie McDaniel’s broad-spectrum maid is the rotund, shouty, motherly type to Scarlett’s wilful aristocrat, and while the part reflects social sentiment of the time, there’s a semblance of cartoonish off-handedness to the role that reeks of entrenched prejudice simply by its very existence. The other supporting black actors are forced to depict their roles as either bumbling fools or unintelligent dullards, and this is disappointing, if entirely expected. Is Gone With The Wind racist? Hell yes, but not in and of itself. It doesn’t glorify the idea of slavery as much as it uses it as a shorthand for audience familiarity, which is less a problem for modern eyes watching as it is a contextual cringe redolent of the period of the film’s production. Of course, your opinion may differ. 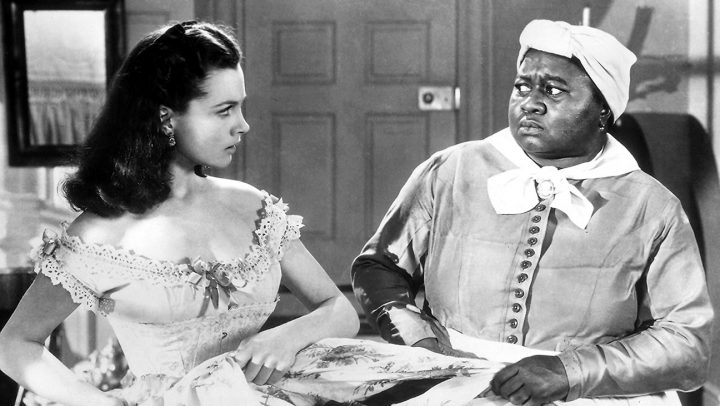 What I did find particularly interesting is how one-sided the film is towards the American Civil War. The story is told entirely from the point of view of the Confederacy, with Scarlett and Rhett siding with their southern countrymen against the “invading” northerners. While I can understand this as a narrative propellant, it still surprised me just how enthusiastic the film is towards the conflict between the states, even in such a tangential manner. Scarlett’s confrontation with a Yankee soldier who casually strolls into “Tara” leads to a violent end, a brief point of melancholy inserted into the overall combative nature Gone With The Wind takes to “glorious battle” and the destitute trajectory the Confederacy states endured during the post-war Reconstruction phase. The film engenders sympathy for the defeated southerners, a strangely prideful and nostalgic tone that works for the characters even if it tends to make light of the depressing nature of the reality people faced at the time. In today’s era of revisionist history towards the Confederacy in America, to see this romanticised version of history play out is conditionally awkward. Contextually, however, there’s a lot to admire here. 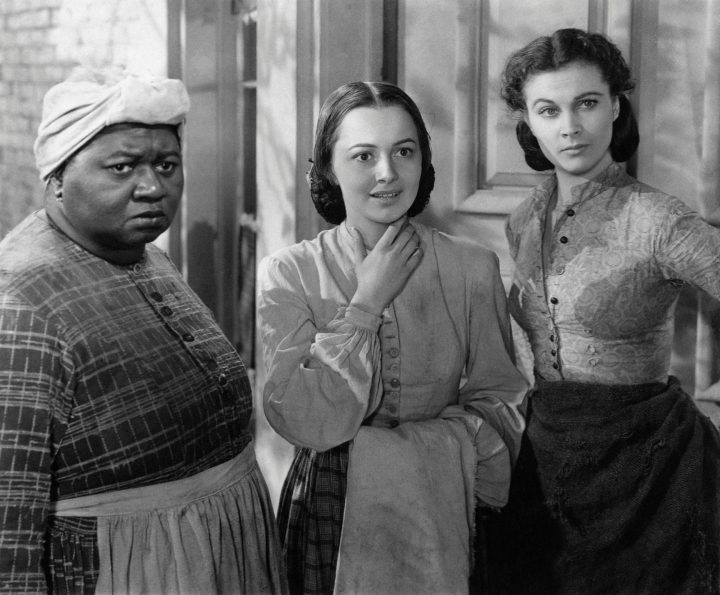 At around four hours (including overture, intermission and entr’acte), Gone With The Wind suffers from problematic pacing and a surfeit of plot. Much of the plot could be excised and the film’s stately grandeur and opulence would remain undiminished, and the manner in which the film unspools its romantic elements is a touch too melodramatic for my tastes. Four hours of epic racism, insults, misogyny and sexism, wrapped up in lavish Hollywood production values, is occasionally hard going – the film’s second half feels less compatible with its first, as the relationship between Scarlett and Rhett blossoms further and further, but the sparring between Leigh and Gable makes much of it worthwhile. Made at a time when length was the prime driver of quality (it’s the old “quality over quantity” argument) Gone With The Wind’s rose-coloured depiction of antebellum South floats through a variety of dramatic, romantic and comedic moments with orchestral flourish and technicolor crispness, and although on-the-nose by today’s social standards is well worth a look.

4 thoughts on “Movie Review – Gone With The Wind”