Apparently, all you have to do to make a funny adult-oriented film is throw in gratuitous references to lesbians, periods, drugs, alcoholism, and self-aware idiocy. Rough Night continues the “tradition” of The Hangover and Bridesmaids and throws a group of women into the churn of party-too-hard shenanigans and potential laughs that “riotously” goes off the rails all too quickly. Frankly, this film is appallingly bad, as unfunny as Ikea furniture and nowhere near as difficult to understand. American humour of this absurdist kind is a bitter pill to swallow for somebody brought up on the best of British comedy, with Rough Night being at best a titter-free wallowing in loose morals and at worst a gargantuan misfire deserving of utter evisceration.

Up-and-coming political aspirant Jess Thayer (Scarlett Johansson) is heading to Miami for her bachelorette party, organised by bestest friend Alice (Jillian Bell), and accompanied by former college besties Frankie (Ilana Grazer) and Blair (Zoe Kravitz), as well as Aussie friend Pippa (Kate McKinnon). Arriving in Miami the group get appropriately shitfaced before hiring a stripper, whom they promptly accidentally kill when Alice jumps onto him mid-performance. Desperate to hide their misdeed, the women first attempt to hide the body, delete security footage, and remain focused despite being both high and inebriated, in order to survive the weekend. Meanwhile, Jess’s fiancee Peter (Paul W Downs), a namby-pamby effete wanker, gets to thinking Jess is leaving him and drives across the country to try and retrieve his erstwhile bride-to-be. 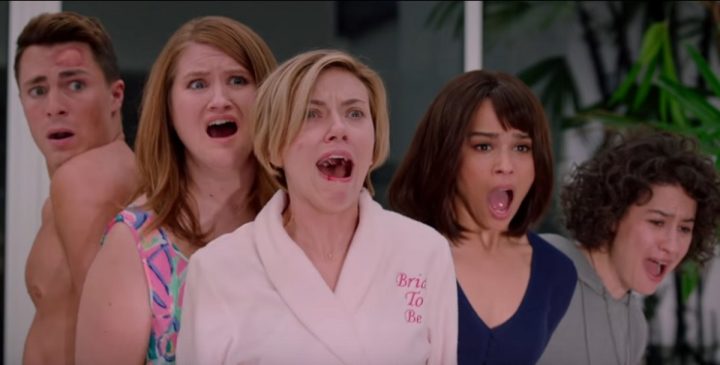 Oh my everlovin’ God, this film is horrifying. Rough Night is one of the most obnoxious, unfunny, patently stupid things I’ve seen in ages. From Kate McKinnon’s awful Australian accent (seriously, love, give it up) to Jillian Bell’s clingy, desperate-housewives screeching and poor Scarlett Johansson trying whatever she can to resurrect anything resembling a career after this debacle, Rough Night is a rubbish film existing in a laugh-free zone of desperately kinky innuendo and clunky female-bonding. Films like this are designed to be salacious, to elicit uncomfortableness, to make one cringe and/or gasp, but to me they just feel idiotic. The characters in these kinds of films are stupid too; Rough Night is predicated on the idea that five women decide not to call the cops when they accidentally kill a man and instead engage in a long-winded charade of desperate antics to cover up their “crime”, whereby making the situation worse. 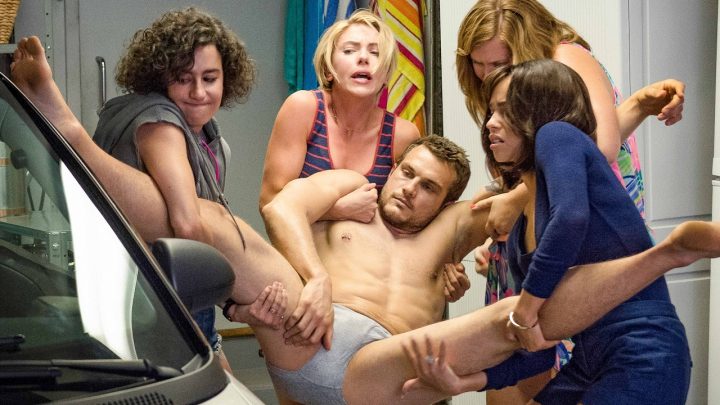 Screwball comedies like this were pretty fun in the 80’s when directors and screenwriters wrote actual characters we gave a crap about, but Rough Night contains nobody we care for at all. Johansson, normally a reliably competent actress, has the personality of plastic sheeting in this, her vaguely middling political figure tenuously believable at best, while Jillian Bell’s horrifying Alice, who spends the majority of the film being as crass as humanly possible, is eye-wateringly awful. Grazer and Kravitz are simply there for the paycheck – although one suspects Kravitz’ character engaging in a menage-a-trois with the swinging next door neighbours (Ty Burrell and Demi Moore, of all people) drew her to the script – and Paul W Downs, as Peter, barely escapes this film with his dignity intact. A truckstop sequence involving blowjobs, meth, and wiping a truck’s windows has to be seen to be believed, and is a rare highlight among the tumbleweeds of this film’s iniquities, and truly represents the nadir of American comedy when this film thinks its that funny. 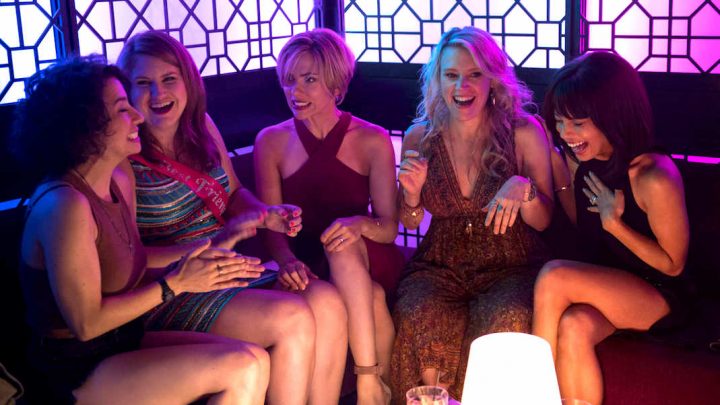 I don’t know, maybe I’m not the target demographic for this mess but I sure as shit didn’t find it funny anyway. One shouldn’t need a vagina to find a film about women in strife amusing, and I sure as heck don’t begrudge any of the cast in this throwing in with director Lucia Aniello for a ribald old time because it has sure worked wonders in the past. If only I wasn’t so indifferent the the humour, the very thing designed to keep me watching, because I’m sure hedonism done well can be an absolute riot to remember. Sadly, Rough Night is less pleasant than a colonoscopy and about as entertaining as the enema preceding it.