Lengthy, episodic melodrama plays like a grand epic but flounders due to a lack of focus: Cavalcade was the winner of Best Picture for 1933 up against the likes of 42nd Street, A Farewell To Arms and Little Women, all superior films I might add, and aside from its obvious fervent patriotism for the “good old days” of British imperialism, there’s little particularly special about the film’s overwrought dramatic mawkishness and overly simplified depiction of life during the early part of the 20th Century. Hugely successful in its day, it’s fair to say Cavalcade hasn’t aged well in terms of narrative, but remains an interesting watch thanks to director Frank Lloyd’s often jarring, solemnified mix of tragedy and pathos. 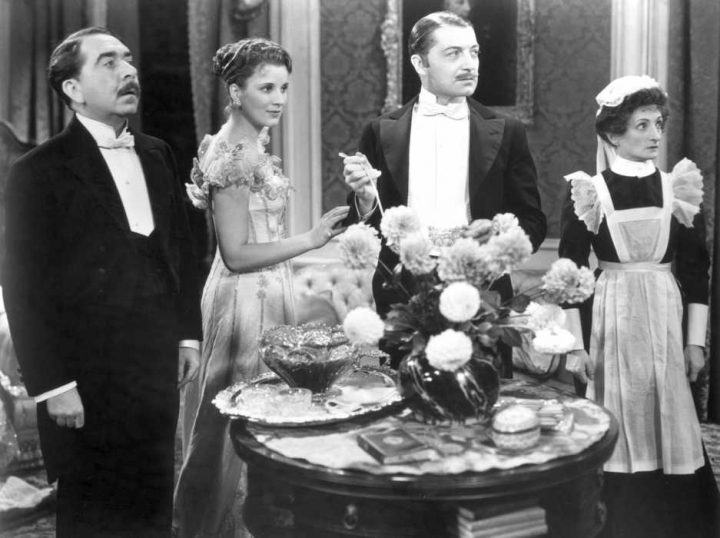 It’s New Year’s Eve, 1899, the beginning of a new Century, and the aristocratic Marryot family are celebrating in their traditional manner. Robert Marryot (Clive Brook) and wife Jane (Diana Wynyard in her Oscar-nominated role) have two boys, Edward (as a man, John Warburton) and Joey (Frank Lawton), while their house staff, Alfred and Ellen Bridges (Herbert Mundin and Una O’Connor) live downstairs. As the years pass, the Marryot’s witness key moments of the period, including the 2nd Boer War, the death of Queen Victoria, the sinking of the Titanic and outbreak of World War I. As Robert and Jane age, their boys find love, happiness, tragedy and heartbreak with their girlfriends, including Edith Harris (Margaret Lindsay) and Fanny Bridges (Ursula Jeans).

Now, I’m not a literary buff by any stretch, but it would appear to me that something was lost in translating Noel Coward’s stage play into an Oscar-winning film. Given the era in which it was mounted and set, there’s no denying Cavalcade spoke to the people of Britain in a way far removed from that of today; war was a heroic ideal back then, with young men throwing themselves into the military like freedom fighting adventurers unknowing the horrors they’d face (the film even depicts it as morbidly tragic yet noble), and the spectre of masculinity rent asunder by war is a key motif in Cavalcade’s naff time-travelling ironic black humour. Cavalcade’s scattered focus, dwelling momentarily on each character in pivotal moments of their lives, never feels cohesive other than the family name, and you never really get to know them as intimately as one would like.

There’s strange elements of showmanship – song-and-dance routines bringing new music from Coward to the public (cross promotion was strong even then, apparently) – and bucolic lethargy to Frank Lloyd’s nostalgic lament to an era now bygone. Keeping in mind the film was made well before World War II, some of the ideas and chisel-jawed dialogue feels a touch dated. The relationships between the characters feels wooden, the film never really transcending its stage origins. Much of the dialogue is pattered to precision, lacking a sense of realistic reaction that would make things feel more genuine. Am I asking too much of an early 30’s film? 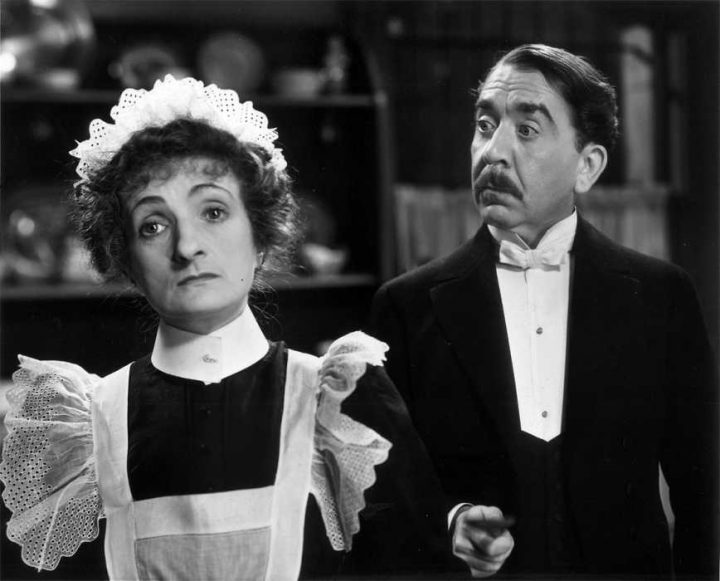 Crucial to the film’s indifference is its episodic nature. Gaps between events leaves holes in character development, with both Brook and Wynyard gradually ageing thanks to some solid makeup effects but lacking the emotional cut-through to make it resonant. Their family’s trials and tribulations feel like just an extended montage of “greatest hits”, with the wartime analogy of maternal lament among the strongest beats on offer here. In truth, the film’s strongest dramatic elements revolve around the Marryot boys adult arcs, particularly young Joey, whose dalliance with Ursula Jeans’ Fanny contrasted against the Great War offers some nice visual flair. An extended war montage, interspersing soldiers marching with explosions and death, is a legitimately moving moment in a film that struggles to find itself, and is telling in that this moment offers nothing to do with the Marryot family whatsoever.

Part of the film’s allure, however, is its rather excellent production design. The film’s sets and costuming look gorgeous (and won an Academy Award), from the highbrow Marryot London apartments to the downstairs dwellings of their house staff – Cavalcade formed the basis of the long running television series Upstairs/Downstairs, as well as finding familiarity with fellow period piece Downton Abbey – look alternately decadent and suitably grungy. Social class isn’t explored with any specificity in Cavalcade (a missed opportunity, in my opinion) although it is hinted at during a late scene in which Una O’Connor and Diana Wynyard discuss their respective children’s apparent romance. It’s obvious in the set design which is the wealthier family; however, once the Bridges family claim their place amongst the British elite (Ellen Bridges turns her drunkard former-husband’s pub into an establishment of some repute, it appears) you can see the increase in their proximity to aristocracy. The feeling of post-Victorian, Edwardian London is given appropriate nuance by Lloyd’s lighting design and use of sound effects to carry the idea of a pre-digital age.

As I said in the opening, there’s a solemn sense of pathos that bubbles up beneath Frank Lloyd’s melodramatic direction. When he focuses on a moment of tragedy or irony, it’s moving, but there are too few moments like this to work against the weaker elements of the story. Basically, I struggled to really care about anyone in this film, mainly due to the lack of time given to a specific character. Cavalcade may have worked on stage, and occasionally Noel Coward’s dialogue does simmer, but at the end of the day its piecemeal storytelling and far-too-many-years-between-moments narrative (reminiscent of the similar style employed by another Best Picture, 1931’s Cimmaron) cannot hold together a flimsy set of faux-dramatics.