Every so often, a film comes along that’s so utterly crass, so hypnotically absurd, so raunchy and debauched, so obvious in its subtext and its utter refusal to take a backwards steps in obnoxiously offending every single race, class, creed and religion known to man, you can’t help but laugh your ass off. Sausage Party is an animated film for adults, and by that I mean actual, living breathing people over the age of 18. This is not, repeat not, repeat in italicised bold not a kid’s film. Exceptionally funny, dripping with commentary about the differences humanity struggles with, and featuring the most obscene dialogue I’ve ever heard in any film, let alone one animated like this (a character drops the C-bomb about five minutes in, so you know you’re in for a ride!), Sausage Party is the love-child of producer (and star) Seth Rogen and his assorted grab-bag of co-star ensemble players – James Franco, Bill Hader, Danny McBride, et al – and if you’re open minded about seeing food swear and cuss and fornicate like the kind of films you’ll find on Pornhub, then this is a hell of a film you’ll enjoy. 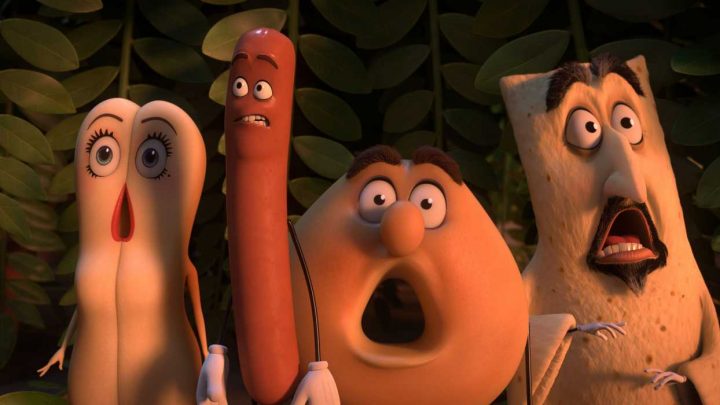 In a supermarket called Shopwells, hotdog sausage Frank (Rogen) and his bun girlfriend Brenda (Kristen Wiig) eagerly await the choosing of their packages by the Gods (us, humans) to journey to the Great Beyond (outside the supermarket doors), where paradise awaits. Trouble is, none of the food inside the supermarket realise that certain death awaits them, until a jar of Honey Mustard (Danny McBride) recounts his awful experience after being returned by a dissatisfied customer. Disbelieving, Frank and Brenda find themselves at odds after Frank learns the truth from a group of imperishables, while his friends – including fellow sausage Barry (Michael Cera) – are taken to the human’s houses where they too must learn to fight to survive against our ravenous appetites. They are all pursued by a vengeful douche (Nick Kroll), who is enraged that Frank has inadvertently prevented him from being used the way he was meant to be.

For a film that almost defies description, there’s almost nowhere it will go for a laugh. Scenes involving a recently used condom, a pastiche of wartime violence similar to Saving Private Ryan’s infamous beach sequence, constant (and I mean constant) sex references and metaphors, not to mention casual Jewish/Muslim relationship conflict, one of the most astonishing sex orgy sequences involving food ever committed to the screen, as well as inordinate racial, sexual and intelligence humour that will offend as equally as it’ll make you chuckle, and featuring a smattering of well-known voices delivering some of the most eye-watering performances in an animated film thus far, there’s something for everyone within Sausage Party’s warm, heavenly embrace. 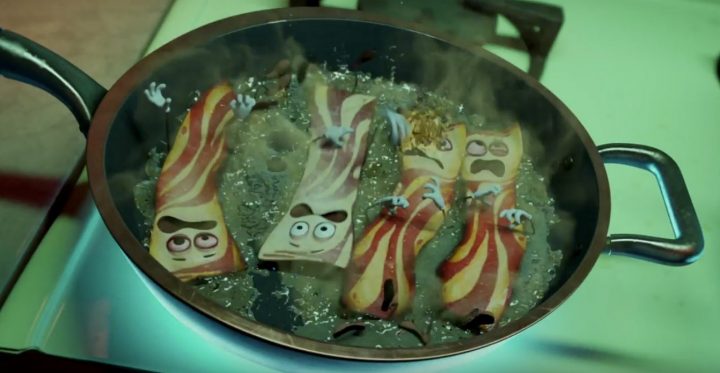 If the idea of walking, talking animated food is the kind of thing you think must come from a drug-induced fever dream, I’m pretty sure that’s how Seth Rogen and fellow story writers Jonah Hill, Evan Goldberg, Kyle Hunter and Ariel Shaffir arrived at Sausage Party’s irascibly crude verisimilitude. Paralleling the human story (as most animated films seem to do, in many ways), Sausage Party takes some sweet detours off the path of Pixar-Deamworks-Blue-Sky-Disney cuteness and delves into the very violent, utterly horrifying moments in which sentient food learns that we consume them in the most terrifying manner possible. The film casts its condiment characters in appropriately racial ways – an army of Sauerkraut is personified in a Nazi-esque riff, whilst a bagel is given life by a Woody Allen-parody vocal performance by Edward Norton (yes, the Edward Norton), and a lesbian taco (yeah) is brought to life by none other than the incredibly sultry voice of Salma Hayek, so there’s the obligatory Mexican archetype right there.

Although it’s an absurd premise indeed, the film carries itself exceptionally well, offering a stream-of-consciousness flood of jokes about everything from vaginal cleanliness to the sexual prowess of the vegetable section; there’s almost no topic or situation Sausage Party won’t broach, and although not every single joke and jibe works every single time, they’re coming at you too fast to become bothersome. In fact, I almost felt as if Sausage Party was working too hard to keep itself from sputtering out, as if by slowing down or trying to make things a touch serious would somehow bore the audience out of watching. There’s so many things going on in this film, so many great moments and so many hilarious characters and ridiculous concepts (a piece of chewed gum parodying the great Stephen Hawking is gut-busting, while an ongoing Meatloaf joke actually made me snort my drink out of my nose) and so much to dissect at a philosophical, moral and ethical level here, it’s a film that bears multiple viewings. 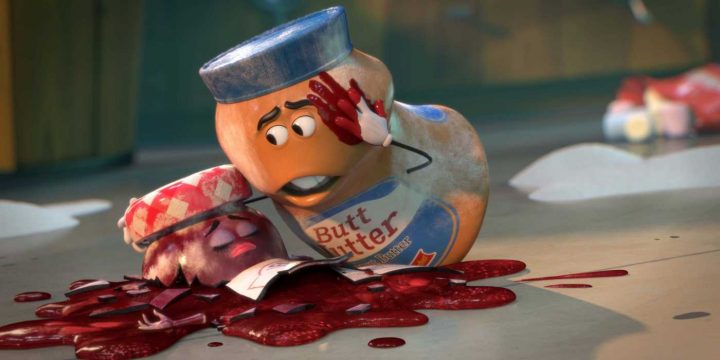 This isn’t to say Sausage Party isn’t flawed, because it’s so teeming with ideas and sidebar comedic moments it often loses focus of what makes it work so well, and that’s Frank’s relationship with Brenda. A moment of on-the-nose dialogue about Frank’s sudden refusal to blindly accept whatever he’s told while Brenda still has “faith” in the Great Beyond (metaphorically, a statement about religion, I gather) has plenty of pathos, but it’s buried under the onslaught of innuendo and sexual depravity (seriously, there’s a food orgy late in the film that is absolutely gobsmacking, and easily funnier than the elephant ejaculate scene in Grimsby) you kinda lose it a bit. And if you are easily offended by racial stereotypes and generalised commentary about social and political issues in the form of vulgar food items, then Sausage Party will absolutely, make-no-mistake-about-it appal the shit out of you.

For all of 90 minutes, I had tears streaming down my face, laughing at the sheer audacity of Sausage Party’s existence. Incredibly obscene, to the point it almost tilts into unnecessary (but not quite), and hilariously off-colour (I mean, the main villain is an actual douche, for Pete’s sake), Sausage Party is not only an acquired taste but also an essential watch. And for the love of God, do not let the kids anywhere near this one. I mean it.