Hacksaw Ridge marks the first film helmed by Mel Gibson since 2006’s Apocalypto; the intervening years have been a rollercoaster for the erstwhile Aussie star, the facets of which we won’t bother recounting here (again). Suffice to say that Gibson’s directorial return is tinged with a downbeat level of contrition, warranted or not. As with his other films – Braveheart and The Passion of The Christ particularly – Hacksaw Ridge is especially violent, hideously corpulent in its treatment of the depiction of combat, set during the US invasion of Okinawa Japan during World War II. Gibson’s penchant for body-rending violence set against faith-based narratives is strong again here, enlivened by several Oscar-worthy performances and an absolutely stellar production design. 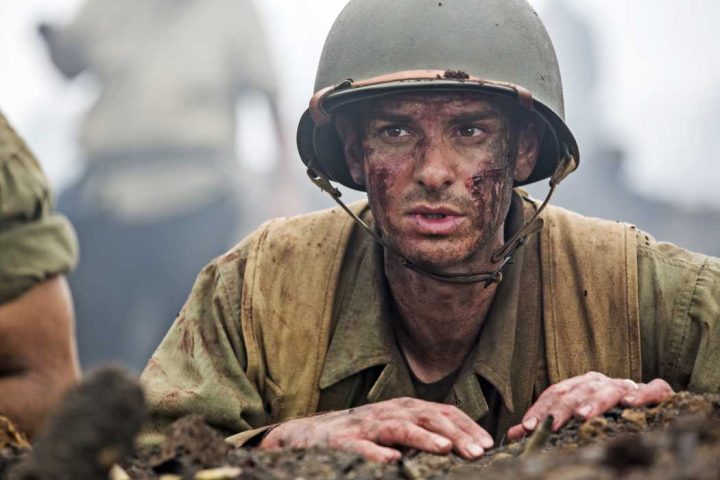 Andrew Garfield (The Amazing Spider-Man) plays Lynchburg, Virginia resident Desmond Doss, the younger son of a former Great War veteran and carpenter (Hugo Weaving), who, following a childhood near-death experience with his brother Hal, decides to take a vow of non-violence. After meeting local nurse Dorothy Schutte (Teresa Palmer), Doss enlists in the military to serve his country in World War II – however, as a Seventh-Day Adventist he informs his commanders that he will not bear arms, becoming a “conscientious objector”. Despite the vitriol and degradation spewed his way by his fellow platoon members (including Luke Bracey), commanding officers (Sam Worthington and Vince Vaughn) and the army generally, Doss is sent to Okinawa after his father prevents a court-martial from going astray – there, Doss works as a medic, saving the lives of wounded US solders as they mount an attack on an almost impassable escarpment known as Hacksaw Ridge.

The true story of Desmond Doss’s actions on the titular ridge in Okinawa became the stuff of legend; Doss was one of only three US servicemen listed as conscientious objectors to receive the Medal of Honour, the military highest salutation, and despite Gibson’s film compressing time and skipping some elements of the man’s real-life journey into battle, Hacksaw Ridge is both a compelling anti-war film (as most of them are) and a testament to the power of faith.

The film spends the entire first act setting up the key players, particularly Doss and his relationship with his PTSD afflicted, abusive father, played with utter brilliance by a terrific Hugo Weaving. Their dynamic early in the film comes to serve as a platform for Doss’s decisions later, as well as a nice little moment of connection during Doss’ court-martial. Teresa Palmer’s performance as Doss’ eventual wife, Dorothy, doesn’t become that “girlfriend-left-behind” archetype we see so often so much as she truly aides him in his mission to survive the war as a memory, a hope, a love. Parallels to the partnership between Gibson and Madeline Stowe in We Were Soldiers, a film from which Hacksaw draws many ideas, are evident but alternative – whereas Stowe’s at-home wife fretted and stressed about her partner’s impending fate, in Hacksaw Palmer becomes a strong advocate for her lover’s career choice and never seems to defer development for wallflower status. 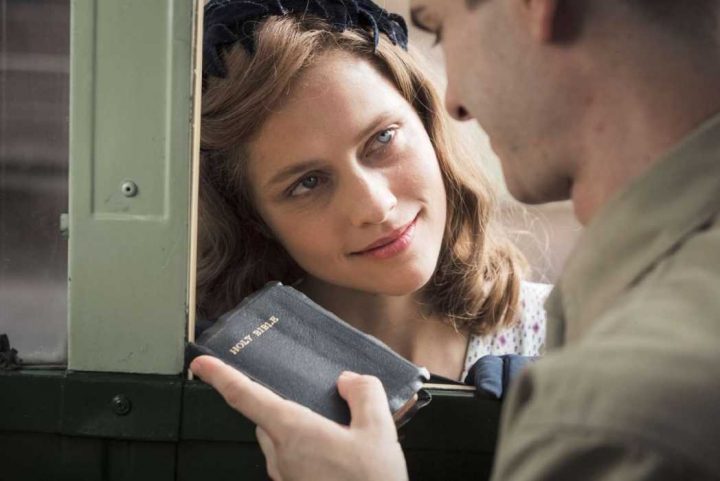 Naturally, once the film heads into battle territory the action heats up, literally. From the opening assault Doss’s platoon, led by Worthington’s stoic Captain Glover and Vince Vaughn’s bombastic Sergeant Howell, is cut to shreds almost immediately, as the Japanese forces lying in wait take no prisoners with their defence of the island. Bullets, grenades, flamethrowers and even artillery from off-shore battleships cut a swathe through the ranks of both US and Japanese combatants, and Gibson’s camera captures it all in flesh-tearing authenticity. Despite the film seemingly glorifying this spectacle as described as hellfire itself, Gibson never seems to gleefully exhibit his destructive prowess. It might seem counter-intuitive to suggest, but Hacksaw Ridge is really rather restrained in its frightful visceral conveyance of death, using moments of abject horror sparingly; in his own way, Gibson’s decision to spend the film’s second half as a pure out-and-out battle sequence almost desensitises the viewer, as if the horror of war is secondary to the horror of what war means. It’s this that makes several moments of gasping terror and gore just that much more profound.

The film’s lead, Andrew Garfield, is superb as Doss, transitioning the man from a smiling, lanky Virginian kid keen on a pretty young girl, to a muddy, desperate, often faith-challenged military recruit at odds with those stationed above him, to the square-jawed reconciled medic scouring the blood-soaked battlefield of Hacksaw to rescue dying men – Japanese and American. The film’s sense of Doss’ faith isn’t lathered on, blessedly, otherwise this might have been an entirely different film, but it does feature strongly. It’s due to Doss’ faith that he refuses to take up a weapon, instead (as he put it himself) trying to “put a bit of the world back together”. Doss’ crisis of faith occurs towards the end of the film, with Garfield wringing tears from this member of the audience as he exclaims to God that he “cannot hear [him]”, and in this instant Gibson thwarts viewers who figured at some point Doss surely has to pick up a gun and shoot somebody. 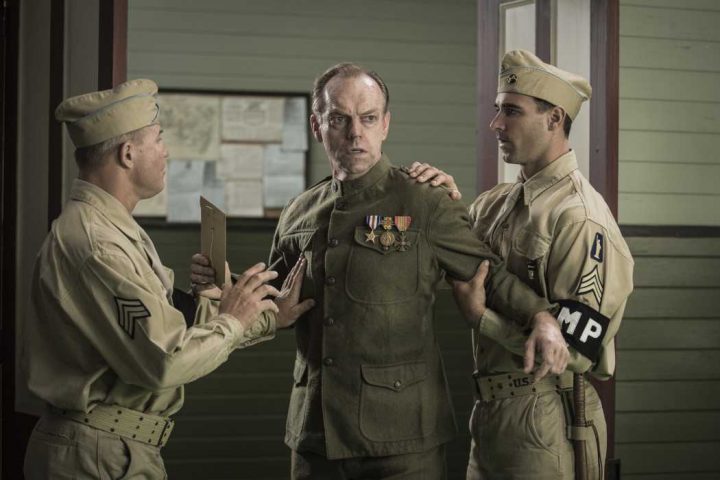 In almost all the films he’s directed, Gibson seems intent on putting his central character through the most gruelling, soul-destroying experiences of physical and emotional pain possible. It almost feels as if Gibson’s religious bent favours persecution and salvation through the scorching fires of enduring unimaginable horrors, and Hacksaw Ridge does nothing to dissuade this argument. Whether you ascribe to Gibson’s particular cinematic vernacular or not at least you could argue he leaves nothing off the table; Hacksaw’s monumental power is in the characters, not so much the violence surrounding them, and Garfield, together with Weaving and (surprisingly) Vince Vaughn, deliver award-worthy performances across the board. They form a trio of compelling characters with depth, all of whom we invest in and care about – Weaving easily outclasses everyone he shares the screen with, which is no mean feat considering the talent Gibson has at his command – and there’s little doubt the film is perhaps one of the truly great war films to not only depict war, but the emotional toll it takes on people.

Hacksaw Ridge is intense, muscular filmmaking from Mel Gibson; it scours the audience with human depravity, and bell-curves its emotional hinges with captivating work by Teresa Palmer and excellent supporting performances from Rachel Griffiths, Luke Bracey, Ryan Corr, and a smattering of other Aussie acting talent. This film depicts war as hell, as a literal baptism of fire for Desmond Doss, and although it does waver heavily on an idealised sense of heroism in the face of wartime horror, there’s little emotional escape from Gibson’s exceptionally well crafted biographical narrative.