There’s few films that go further to define an entire generation’s love of the 80’s than Ghostbusters, the world’s first big-budget scare-comedy and one of the most outright memorable event films of the decade. Starring a clutch of Saturday Night Live alumni, including Bill Murray and Dan Aykroyd, Ghostbusters would go on to become not only the highest earner domestically of the year, but cement itself as an iconic moment of Hollywood creativity, ubiquitous quotes such as “He slimed me” entering the lexicon of pop-culture almost immediately. Of course, Ghostbusters‘ popularity was capitalised on by a plethora of computer game tie-ins, cartoons, and inevitable sequels (Ghostbusters II, and more recently 2016’s Ghostbusters reboot), but nothing could match the lightning-in-a-bottle success of the 1984 original. 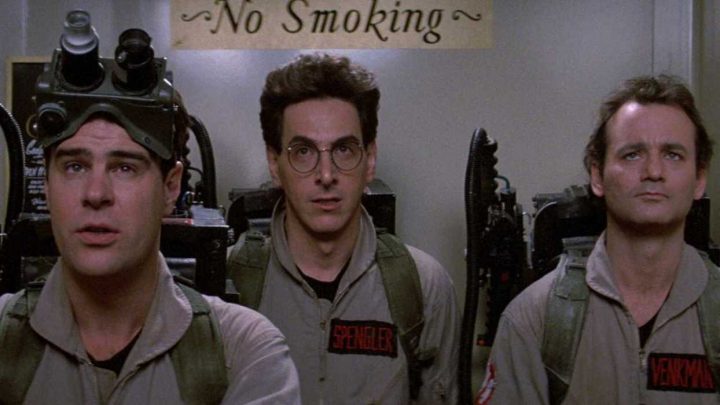 In New York City, three geeky professors – Peter Venkman (Bill Murray), Ray Stantz (Dan Aykroyd) and Egon Spengler (Harold Ramis) – begin to suspect a mounting paranormal event is about to occur in the area, following an outbreak of apparitions. Developing ghost-catching technology the trio set themselves up as “ghostbusters”, trapping and containing ghostly encounters around the city. Venkman meets professional cellist Dana Barrett (Sigourney Weaver), who is would appear is a conduit for the influence of malevolent Babylonian God Gozer and his underling Zuul, while Egon and Ray try to counter the influence of pesky EPA agent Walter Peck (Die Hard’s William Atherton), who wants to shut the group down. So when Dana and her nerdy next-door neighbour Louis Tully (Rick Moranis) are hunted by demonic beasts and transformed by the power of Zuul, the team, together with fresh recruit Winston Zeddemore (Ernie Hudson), take to the streets to combat this world-ending evil.

Ghostbusters works on multiple levels. A fairly simple premise is gifted to three heavyweight comedians and a supporting roster of compelling actors, who legitimise the outrageously preposterous story conceits and deliver a slice of fun amidst the gooey visual effects and scares. For a start, the characters themselves are indelibly interwoven into the story: it’s the classic underdog story where authority figures don’t believe the heroes until it’s almost too late, then the heroes have to leap in and save the day. Bill Murray spends most of his time almost ad-libbing through the film, his flippant, wry humour and deadpan delivery contrasting against the supernatural virtuosity of the effects team (who, it must be said, do more for the film than a lot of people would care to admit), while Dan Aykroyd and Harold Ramis provide the “technical” exposition in a manner that’s hilarious and easy to accept. Sigourney Weaver is solid as Dana Barrett, obviously wanting to depart from her Ellen Ripley persona by softening her approach to the material. Throw in Rick Moranis as an annoying-but-lovable neighbour in Dana’s apartment block, the snivelling William Atherton and the he’s-just-there Ernie Hudson (reports suggest the role of Winston was originally written for Eddie Murphy, but the actor passed on the film and Hudson was brought in as a last minute replacement), and you have a solid roster of actors working against the big-budget extravagance Hollywood can afford.

Pre-dating computer graphics by several years, Ghostbusters‘ scares and visual effects are still as good as they’ve ever been, and with the exception of a few rotoscope and matte shots, the film has barely dated in terms of its aesthetic. This is testament to the strength not only of the writing, but the judicious use of practical and photochemical effects, all of which to combine with Ivan Reitman’s captivating direction to render New York in the most lovable light, but also give the film it’s unmistakable heart and soul. The visuals of the enormous Stay Puft Marshmallow Man striding through the streets of Manhattan (“Nobody steps on a church in my town!” cries Venkman), the terrifying creature in Dana’s refrigerator, the twin demon dogs that chase Dana and Moranis’ Louis Tully through the streets, and the famous crossing the streams showdown with Gozer herself (played by supermodel Slavitza Jovan), have all become synonymous with the franchise and, if we’re honest, those actors careers. To say nothing of Bill Murray’s ultimate burn of Walter Peck – “It’s true. This man has no dick.” – which continues to make me wee my pants laughing to this day.

There’s very few comedy films in the pantheon of the genre that remain as beloved by so many as Ghostbusters. It’s this generational adoration – whether warranted or not – that heaped the vitriol on producers of the 2016 remake, to the detriment of that film’s success. As a technical effects film, Ghostbusters has aged incredibly well (certainly far better than many of its cinematic brethren of the day) and its humour, heart and sense of sheer entertainment cannot be faulted. Although one might question Bill Murray’s somewhat stalkerish nature with Dana Barrett, generally the characters depicted are lovable and engaging, which goes a long way to keeping the audience entertained. With solid visual effects, some nice laughs and decent scares, Ghostbusters is the prototypical 80’s comedic adventure that delivers on all cylinders. Pump up that awesome soundtrack and enjoy.