Principal Cast :  Anita Page, Bessie Love, Charles King, Jed Prouty, Kenneth Thompson, Edward Dillon, Mary Doran, Eddie Kane, J Emmett Beck.
Synopsis:   Harriet and Queenie Mahoney, a vaudeville act, come to Broadway, where their friend Eddie Kerns needs them for his number in one of Francis Zanfield’s shows. Eddie was in love with Harriet, but when he meets Queenie, he falls in love to her, but she is courted by Jock Warriner, a member of the New Yorker high society.

The first Hollywood sound film to win Best Picture, the first Musical to do so as well, The Broadway Melody is a definitive product of its time and as such, comes recommended with plenty of caveats. Released as both a sound and silent film (hints of its silent edit remain with plenty of moments where nobody speaks at all) as cinema chains were beginning to make the change to sound, The Broadway Melody’s astonishingly upbeat, nonsensical cheeriness and absurd level of clap-flappy Americana does become somewhat wearying, but overall remains a charming little thing that gives us a glimpse into 1920’s New York City and the burgeoning Broadway scene. 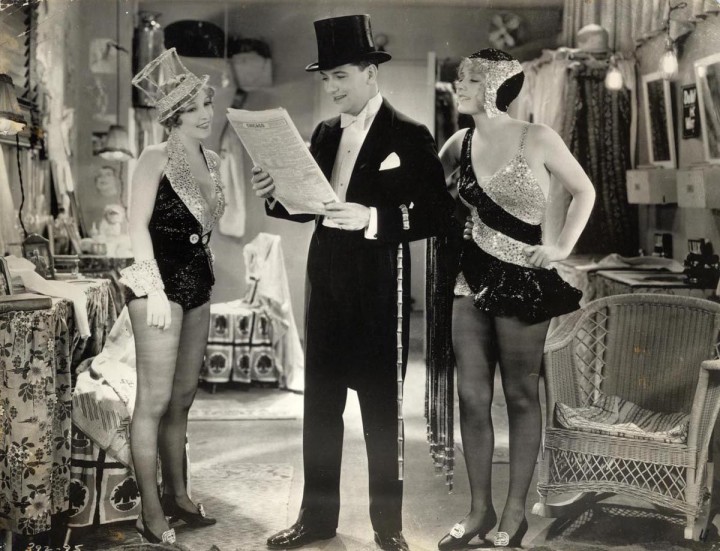 Sisters Harriet “Hank” (Bessie Love, deservedly nominated for a Best Actress Oscar here) and Queenie Mahoney (Anita Page) move to New York City to bring their double-act to the stages of the Big Apple, in part thanks to Hank’s romantic interest Eddie (Charles King) who’s working for impresario Mr Zanfield (Eddie Kane) on a new musical. Although the pair initially flop on their audition, they find themselves in the production, although when Eddie meets Queenie he is instantly smitten, as she is with him. Naturally, neither wants to hurt Hank, so Queenie turns to the attentions of local man Jock Warriner (Kenneth Thompson), a situation which drives Eddie crazy. Against the bright lights of New York’s Great White Way, and with the heartbreak of her sister to consider, Queenie discovers that although all might be fair in love and war, it’s not exactly easy treading the boards. 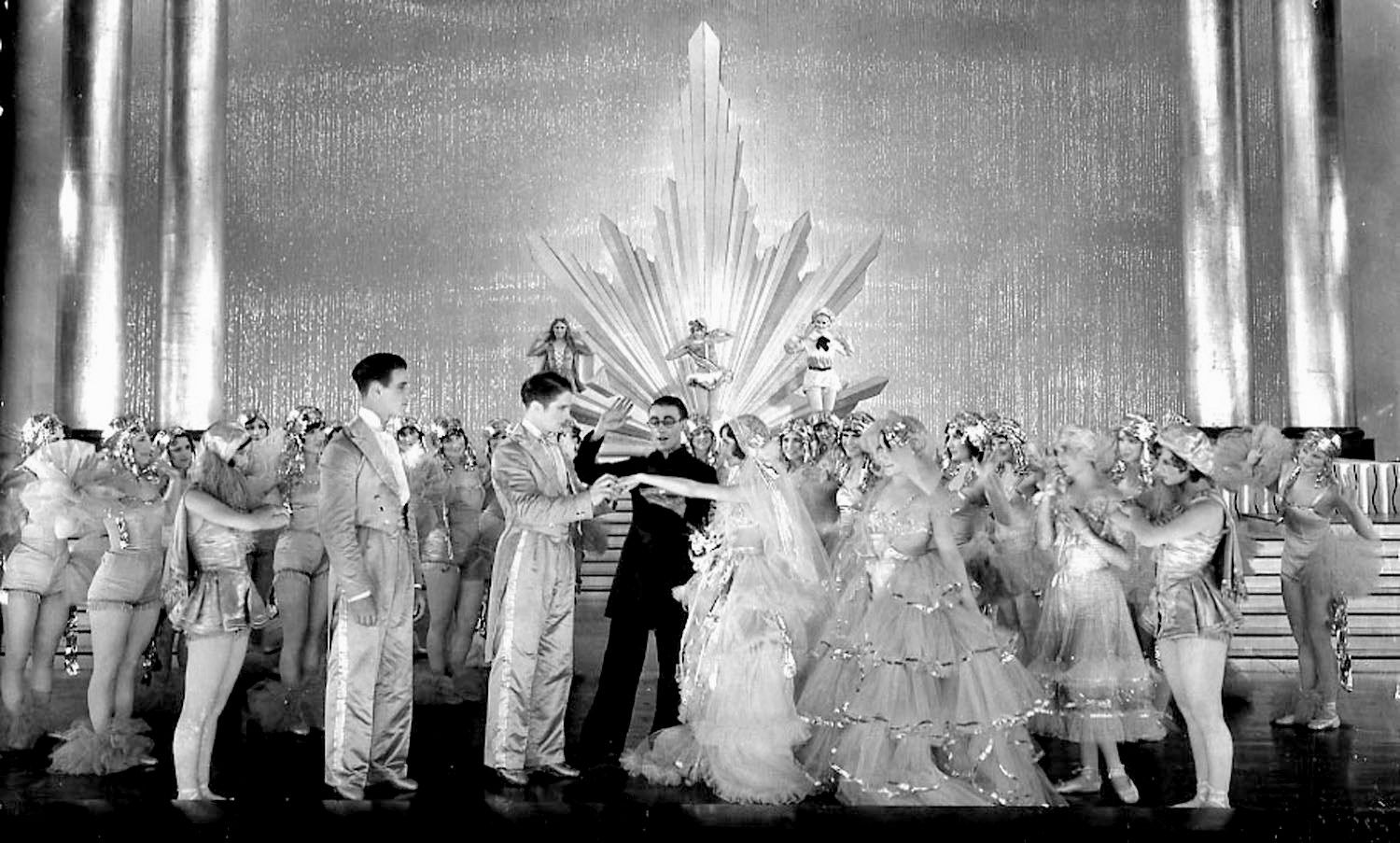 Daffy as a duck, farcical beyond modern comprehension, and ripped right from the idea that cinema was just filmed stage theatricality, The Broadway Melody has plenty to both recommend it, and to consider before watching. The film has a surprising amount of slapstick and running gags threaded throughout it – a stammering Uncle Jed (Jed Prouty), a gaggle of “Yes” men surrounding Zanfield whenever he speaks, and a male performer constantly seeking the spotlight (before it’s literally thrown at him), to name a few – and it’s almost entirely upright and cheery, to the point it’s hard to swallow. The film’s brisk pace and simplistic, generic characters within this melodramatic soufflé of a story don’t really give one time to breathe deeply of what director Harry Beaumont brings to the screen; then again, this is a musical, so some overly theatrical simplicity should probably be expected. That said, Bessie Love’s performance as Hank, anchoring the film as the spitfire Mahoney sister who will stop at nothing to make it in New York, is terrific, giving her role a strength and commanding presence belying her diminutive stature. Anita Page’s role of “beautiful” Queenie is the kind of role designed to “look good and not much else”, and Page does indeed look great, but acting with any kind of naturalness isn’t her strong suit. The rapid-fire patter between the two, and breathless exhortations of “Drama”-with-a-capital-D create sparks for both the cast on screen and the audience watching, while Charles King, as resident misogynist Eddie Kearns, feels flat-footed amid the dancing, singing and music. In fact, the entire film is utterly misogynistic, although not purposefully, I wager; the film’s era is simply replicated to perfection (several characters decry “on the level” when trying to be serious, which is kitchy-cool to modern eyes) and all the men seem to view women as children to be curtailed and controlled, hung off an arm while the gents discuss serious matters of life and state. Don’t think of it as an attempt to hamper feminism as much as simply depicting how life was back then. 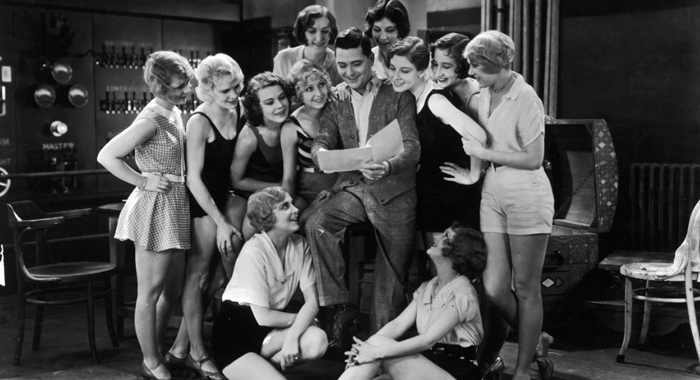 The three-way romantic angle springs to life with a fourth wheel attached in the form of Ken Thompson’s Jock, a slick-haired douche-bag with no further designs on Queenie than a simple one-night stand. Queenie’s constant thrusting of herself upon him as a way of countering her reciprocal feelings for Eddie are cringeworthy, yet Jock’s behaviour is eminently more reprehensible considering how his role unfurls later in the movie. Plus there’s the issue of people’s personal space, and how often other actors breach it. When two people are talking casually to each other and their noses are an inch from touching, to my eyes it looks a little laughable. And it happens in this film a lot.  Look, The Broadway Melody isn’t so much a musical film as it is a high-melodrama with some songs thrown about (apparently without any consideration for tone or timing), and if you look at it with this fluffy, nonsensical angle in mind it’s actually rather sweet. The film’s musical numbers feel awkwardly staged, however. In fact, lots about the film’s technical aspects feel very below-par, considering the quality of films (such as the previous year’s Best Picture Winner, Wings, which stands head and shoulders above this one) around it at the time. Actors break frame constantly, characters talk and appear within a scene but aren’t visible to the audience, and the editing on this just feels like somebody was drinking on the job and thought “that’s good enough”. It’s not great, to be entirely honest. The costuming is decent, though, as is production design generally (the Zanfield theatre’s opulence is remarkable, in particular) and the songs within the film are suited to the prevailing styles of the time.

But the film hasn’t aged well at all, in fact. Fans of cinema from the era will delight in how creaky and clunky it all seems, but less specific fans will probably find it a bit too breezy and light for their liking. The Broadway Melody is infuriatingly upbeat almost in its entirety (a crucial scene for Bessie Love’s character comes late, and offers some emotional heft, but by then it’s all over) and if you’re the kind of person who’ll happily swallow a tablespoon of straight sugar without consideration, this film will sit very well with you. Everyone else will perhaps need to check their expectations at the door, and retain the period in which it was made firmly at the forefront of their critical thinking. The Broadway Melody isn’t a great film – hell, it’s not even a great musical, per se – but it offers a diverting, momentary zing and zip for lovers of classic cinema.