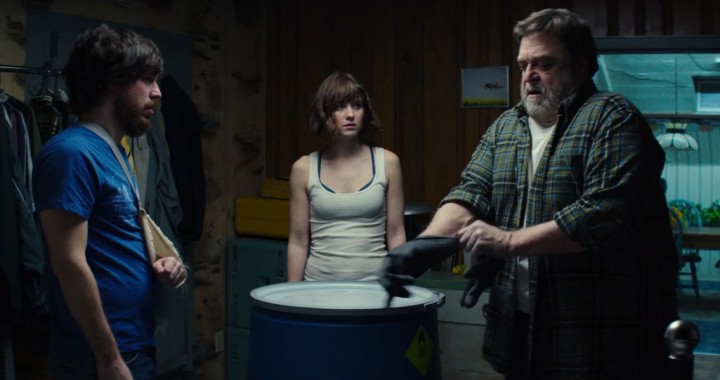 Director :   Dan Trachtenberg
Year Of Release :   2016
Principal Cast :  John Goodman, Mary Elizabeth Winstead, John Gallagher Jr, Mat Vairo, Cindy Hogan, Jamie Clay.
Approx Running Time : 105 Minutes
Synopsis: After surviving a car accident, a woman wakes up in an underground cellar, where most of the film takes place. She fears she has been abducted by a survivalist, who tells her he saved her life, and that a worldwide chemical attack has left Earth’s surface uninhabitable. Uncertain what to believe, she decides she must escape, no matter what dangers she may face outside.

It’s an understatement to say that when the first trailer for 10 Cloverfield Lane landed before Michael Bay’s Benghazi action opus, 13 Hours, and was uploaded to the internet by a stunned viewer, the world wide film community paused, agog with shock. Naturally, moments later, all manner of hyperbolic proclamations of sequels, rumours, possible story arcs and/or jigsaw puzzles on how this film relates to its nomenclatured cousin, Cloverfield, burst forth. Almost immediately, Paramount released a high quality version of the trailer to satisfy the ravenous online flurry for information, which only drove more and more people to distraction with a simple question: how the hell did they film a sequel to Cloverfield without anybody knowing?

The answer is pretty simple: this film is not a direct sequel to Cloverfield. For want of a better word, call 10 Cloverfield Lane a film sidequel of sorts, linked only by….well, that would be spoiling things. 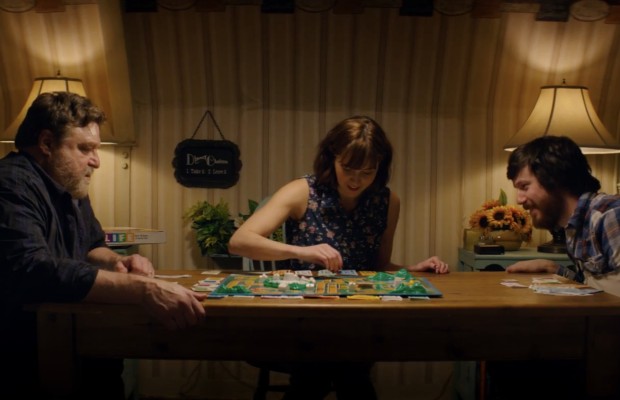 After being involved in a car accident whilst leaving the city following a bust-up with her fiancée, Michelle (Mary Elizabeth Winstead) wakes up to find herself inside an underground doomsday bunker, prepared, controlled and inhabited by a man named Howard (John Goodman). He informs her that there has been “an attack”, and that not only is the air outside contaminated, but that there’s nobody left alive to come rescue them. Also inside the bunker is Emmett (John Gallagher Jr), who we learn helped Howard build the bunker over many months and years. Initially sceptical of Howard’s claims, Michelle confronts her worst fears when it would appear her captor’s claims are true; things take a nasty turn, however, when clues are discovered that do not paint Howard in the “loving father” image he’s tried to cultivate for himself.

Let me start out by saying that I did enjoy this film. It’s mostly a quiet, character-driven piece that works largely thanks to the performances of the three leads, in a vaguely post-apocalyptic thriller akin to On The Beach or Z For Zachariah. The quiet moments are punctuated by outbursts of violence, anger and suspicion, an uneasy tension existing for much of the film’s underground narrative. Winstead is terrific, Goodman is better, and Gallagher seems to “be there” but offers scant development comparatively speaking. The film’s brutal malignancy is derived from not knowing if Goodman’s Howard is crazy, kinda crazy, or batshit insane – the script throws a few red-herrings into the mix regarding his motives, and implicates some subplots which would make the recent Room seem positively genteel by comparison. There’s a mystery here that unwraps itself with the precision of a nicely honed Hitchcockian thriller, save for one irredeemable fact. 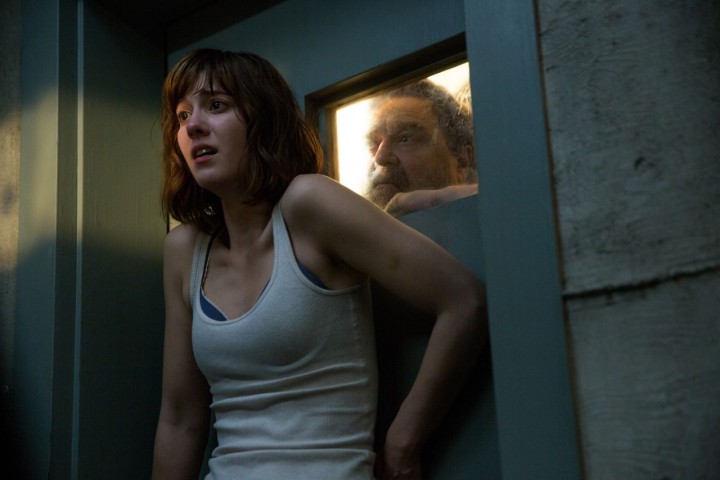 In hindsight, the fact the title of the film was changed so late in the production speaks volumes to how schizophrenic the film really is. Initially produced under the title The Cellar, and changed to Valencia (WTF?) before producer JJ Abrams came up with the idea to append a Cloverfield label to it, one wonders if it had been a better idea to just keep it as it was originally intended and avoid comparisons to what I consider to be a better film. Yeah, I said it: Cloverfield is a better film. By a significant margin. Stupidly, had the guys at Paramount removed the connotations and expectations associated with the original Cloverfield, I suspect 10 Cloverfield Lane’s impact as a stand-alone film might have been more pronounced by what people aren’t expecting. You stick Cloverfield in the title somewhere, and you just know aliens are bound to show up – it’s the franchise, dammit, and to pretend anything else is either short-changing the audience, or taking them for fools.

It’s like they made two different films here. The opening hour and a half of this 105 minute opus is a compelling, often above-average psychological thriller, a mix of Panic Room and Saw with a hint of whatever post-apocalyptic template you care to imagine where complete strangers have to try and trust each other for their mutual advantage. The final ten minutes or so is where the real meat of the movie arrives, the sudden about-face into true Cloverfield territory that, if I’m honest, kinda feels like it comes out of nowhere. Abrams publicly stated that “there were so many elements that felt like the DNA of this story were of the same place that Cloverfield was born out of…”, meaning that while the characters and monsters from Cloverfield aren’t in this movie (and they aren’t), the genetic material from that film is inhabiting this one in a way that manifests through Michelle’s journey as a character stuck in a bunker, hoping to escape. I call bullshit. The DNA for Cloverfield looks like it was mixed in a lab Jurassic Park-style and injected wholesale into a different story that didn’t deserve it. 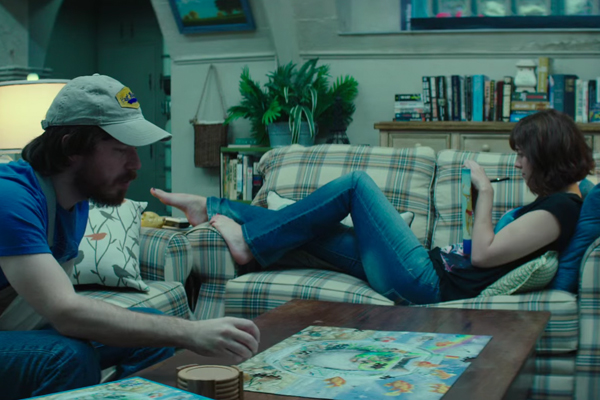 Frankly, the two don’t mix well. The film runs aground in its final act, a tonal shift of tectonic proportions that feels jammed on at the end of what might have otherwise been a largely competent little psych-thriller. If you watched this film without any idea about the original Cloverfield, you’d sit there slack-jawed wondering how you’d been so hoodwinked. It’s a shame, because expectation, and the refusal to acknowledge that it is a bait-n-switch for audiences expecting one thing and getting another, will ruin the movie’s legacy. The mystery running throughout the film is solid enough, but offers nothing in terms of rewatchability. I doubt I’ll give this film another viewing outside of a broadcast television run sometime, or maybe as a freebie Christmas present if one of my relatives are so kind. The film pretends to have Fight Club motives hidden betwixt its dynamic sound mixing and punctuating gut-slams of violence and horror, but a second watch will seem moot considering the film’s final act twist is such a let-down. This ain’t a Sixth Sense thriller. This is a straight-up narrative rug-pulling that won’t survive repeated viewings.

I won’t spoil the ending (I promise, I’m trying hard not to just tear this film to shreds, but no doubt history will prove me right) but the film absolutely guts Winstead’s character right at the last gasp. It’s one of those weird sequel-setting-up moments that might have seemed like a good, nay great idea at the time, and a big hoo-rah from the audience, but considering where the character has come from, who she is, and what she’s just been through, her final moments on the screen are just so out of character, so obviously Make America Great Again, it undermines the previous hour and a bit of story. The original film finished on a downbeat note, with the major characters all apparently perishing in New York City, so one wonders if that melancholy worked for or against the creative decision-making on show here. Had the film had balls, the film’s finale cut-to-black moments (there’s a few) would have been a perfect note on which to conclude, leave the audience guessing. The fact that Cloverfield didn’t actually show everyone being killed in the end left it somewhat open to the fact that perhaps somebody survived – there was ambiguity to it. In 10 Cloverfield Lane, we’re flat-out shown the outcome of our characters’ journeys, for better or worse, and I think that had Abrams and Co taken a chance to end the film at a crucially violent, physically rending moment, this movie might have achieved greatness.

The film should have finished about five minutes earlier than it eventually does, as director Dan Trachtenberg wrings every possible moment he can from the minuscule budget he had working for him.

10 Cloverfield Lane has plenty going for it. Great cast, an interesting if jaded premise, and a mix of Goodman’s terrifically unbalanced characterisations, some wry humour, and Winstead’s eponymous Everywoman character, make for good-to-great storytelling for a lot of the slow-build first half. But the second half’s shifting of gears feels like the jamming of a square peg into a round hole. It’s like somebody wrote a decent post-apocalyptic thriller and then was forced to tack some half-baked sci-fi tropes onto the end of it. That’s what’s so annoying about 10 Cloverfield Lane. This isn’t a sequel to a great film; it’s a stand alone film pretending to be something it’s not.