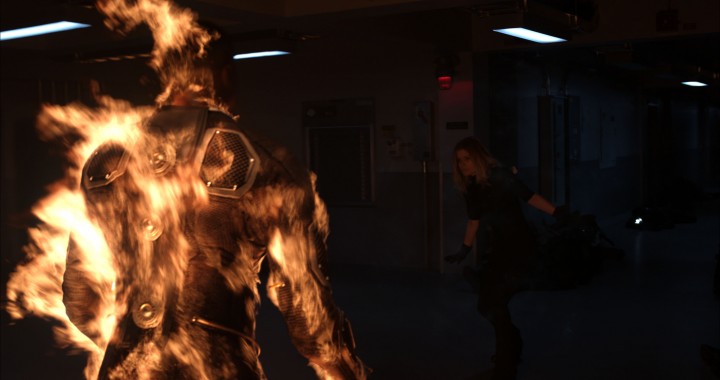 From its troubled production, a hugely acrimonious relationship between director Josh Trank and producing studio 20th Century Fox, eviscerating critical appraisal and abysmal box-office takings, Fantastic Four has every reason to be considered one of 2015’s biggest turkeys. Hell, it probably ranks as one of the 21st Century’s biggest turkeys thus far, and we’re only 15 years in! Off the back of two successful, if critically ambivalent, cinematic adventures in 2005 and 2007, the Fantastic Four franchise has languished at Fox while they sorted out their other Marvel brand, the X-Men. In the light of the MCU and X-Men’s success, Fox naturally thought that Fantastic Four would be a shoe-in for some easy money; just reboot the concept, hire up-and-coming director Trank, and cast a bunch of fresh faced actors in the roles, and then sit back and wait for the bonanza to kick in. Sadly, for the studio, for the cast, for Trank, and for us, this did not eventuate. 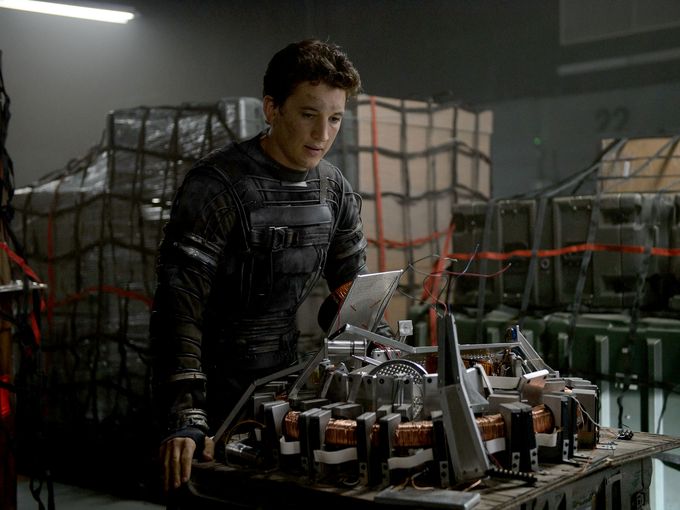 After discovering a way to teleport matter between dimensions and back with his friend Ben Grimm (Jamie Bell), Reed Richards (Miles Teller) is recruited to work for the Baxter Foundation, run by Professor Franklin Storm (Reg E Cathey) and his daughter, Sue (Kate Mara). Fellow brainiac Victor von Doom (Toby Kebbell), crueled by jealousy over his failures – both with a possible relationship with Sue, and with the results of his dimension technology research – is also brought onto the project to develop a working teleporter, in order to extract new resources for a rapidly depleting Earth via the existence of another world, a Planet Zero. Following a catastrophic accident on Planet Zero, all five of the young scientists are transformed in a variety of ways – Reed has the ability to stretch, Sue to turn invisible, Johnny to manifest an eternal flame, and Ben…. well, Ben becomes a giant rock-creature with immense strength and invulnerability. And the less said about Victor von Doom, the better….

Fantastic Four isn’t the clusterf@ck the reviews have led you to believe. A clusterf@ck implies that there’s not a good film, hell, even a great one, somewhere buried beneath what Josh Trank and Fox ended up releasing. Perhaps worse for this film, there is a good Comic Book Movie here, only it’s ruined by a disjointed, overly ambitious, utterly all-too-serious series of plot decisions that mitigate the sense of kooked out fun the comics you fell in love with as a kid contained in spades. Now, I’m no aficionado of the Fantastic Four, and my knowledge over their history is marginal at best, but it seems to me that, at least for a start, the film sets the cast way too young for what its trying to achieve. I always imagined Reed, Sue, Johnny and Ben to be at least late twenties, maybe early-to-mid thirties, and here they’re barely out of college. As an origin story, I guess that’s okay, but in similar ways to Man of Steel’s “Superman’s inexperienced” excuses, here the youth works against believing the abilities of these people and their maturity to handle it. 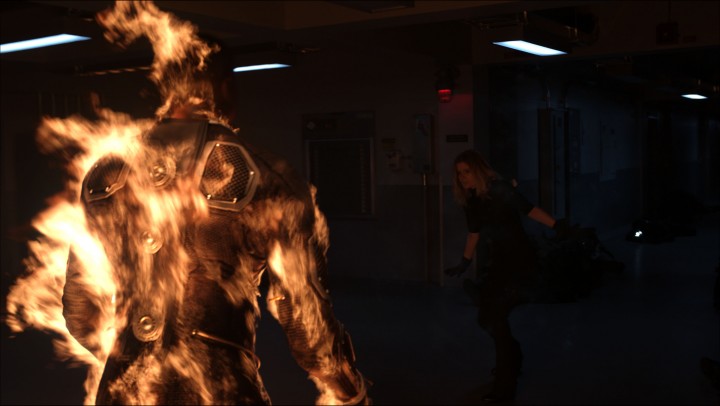 That aside, I actually think the opening half of the film sets up the premise, the characters and the “world” the studio wants to build quite well. Sure, it’s plenty talky, and the emotional arc of each character isn’t as fluid or dynamic as Trank probably envisioned, but if it’s an origin story we needed, I guess this works well enough. The true origins of the Fantastic Four have been retroactively amended countless times over the course of their long history, and the 2015 film keeps that proud tradition alive with a convoluted, entirely too complex plot device involving an alternative dimension, which is disappointing.

A key issue for me would be the inclusion of Victor von Doom, who we all know eventually becomes key Marvel villain Doctor Doom, as portrayed here by Toby Kebbell. Doom’s personality isn’t clearly delineated from the opening, he’s all arrogant, insolent and keen to play some kind of martyr role, and yet this “tragic” narrative isn’t earned or given foundation by the film’s brisk opening act. As such, his turn to villain is lackluster, and the end result of Fox’s apparent reshoots and restructuring of the character is one of mediocrity and apparent creative confusion. Now, if you’re going to have a villain, especially in a comic book film, you need to have one that’s either a) a complete caricature, a camp, over-the-top villain who exists purely as a contrast to the heroes, or b) you need a tragic, anti-hero character, who believes he’s doing the right thing in his own mind (a lot like X-Men’s Magneto), even if he puts innocent lives at risk. The end result of Doom isn’t either of these two, it’s an underwhelming variant of the latter that loses steam once the character is supposedly killed while over on Planet Zero. 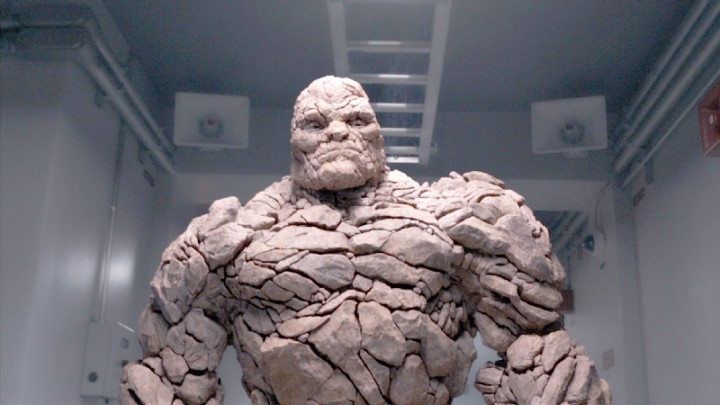 The core quartet of characters, particularly Sue Storm, lack cohesion with each other. Miles Teller makes a convincing Reed Richards, but doesn’t have chemistry with Kate Mara, which means his “flirting” with her lack a compelling edge. Teller’s best on-screen sparring partner is with Jamie Bell’s Ben, but they have limited actual time together in the same frame, and the end result is a mixed bag of chuckles and missed opportunity. Michael B Jordan, as Johnny Storm, is virtually redundant as anything other than a one-dimensional “rebel” archetype. Offering little emotional heft, and even less comedic charm, Jordan’s role is a load less interesting than Chris Evans’ essaying of the same role in Tim Story’s mid-2000’s franchise entries. And watching an actress like Kate Mara, who is beautiful, try and wrangle her abilities inside a character so charmlessly uncharismatic is not only frustrating, it’s enraging.

Supporting the film are a couple of old pros, namely Tim Blake Nelson, as a seedy military type, and Reg E Cathey’s voice, who is quite possibly the best thing about this entire film. Nelson plays sleaze like nobody’s business, and his underhanded, reptilian smarmyness here is suitably demonstrative. Cathey, as Storm Snr, holds the bulk of the film’s more infantile plotting together with assurance and a paternal strength. 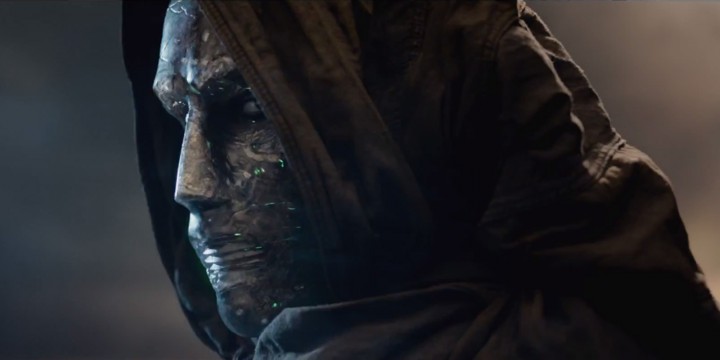 While it’s hard to see where Trank’s original vision and Fox’s editorial bastardization begin, the film’s true cause celebre is its tonal shift and concluding action sequence. For a film about people with extraordinary powers, it’s amazing there’s so little… well… superheroics in this movie. The finale, a convulsive slobberknocker of exploding heads and Doom’s echo of Man of Steel’s “World Engine” device (whatever it was here, I’m still not sure what the hell was going on!) seems desperately tacked on, the kind of exhaustively collisional last-gasp sequence designed as a “last stand” for the four central characters. It lacks any kind of emotional connection, mainly because the film’s spent so little time with each of them together, there’s no foundation there. The prickly relationship between Reed and Victor is alluded to constantly, but at no point do we really get to see that develop – there’s a payoff to no buildup. At least in Tim Story’s films, Julian McMahon’s relationship with Ioan Gruffud’s was enough to satisfy even that basic character plotting. That, and the “oh, let’s all have an easy, casual rapport between us all now instead of the sniping we all enjoyed earlier in the film” tone that just boggles the mind anybody thought people wouldn’t notice. The bonds of friendship formed over ten seconds of action somehow overcome a 90 minute movie’s idea that these guys are uneasy bedfellows? C’mon, seriously?

When the dust settles on Fantastic Four, there will be a lot of people reconsidering their initial bile towards the final released product. The film has some problems, sure, and the ending is entirely too rushed, but for those who don’t have vested interests in the franchise, it’s hardly the scathing indictment on Fox that social media would have you believe. I expected Catwoman levels of bad, the kind of film that made Batman & Robin an orgy of asinine scripting and overblown production value, but this film isn’t at that level. Yeah, it’s not great, and there’s so many puzzling creative decisions fanboys will pore over for years to come, but there’s a good film lurking just beyond the surface that, for whatever reason, we will now never see the fruits of.