G’day folks, something different today as we broach all things television.

Now, a whole slew of new shows have started in the US, as well as one we’re keeping an eye on in the UK (read on, folks) and having glimpsed a few of them this week I’m pleased to say the next few months are gonna be slam-bang for viewers of the small screen. Below, we’ll give you some sneak peeks at them, and what we think/hope they’ll be like. Suffice to say, spoilers ahead, yo! 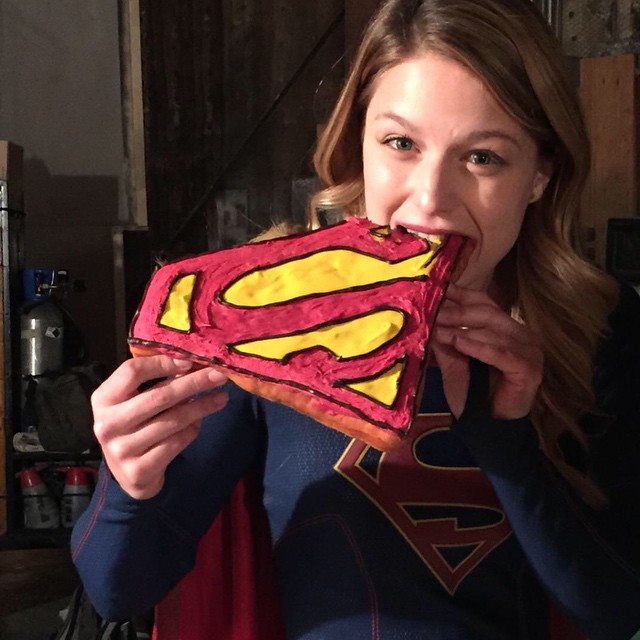 So, we had a gander at the pirated copy of the Supergirl pilot that’s been floating about the place, through nefarious means, and our initial thoughts are that it’s at least on par with the initial barrage season of The Flash. Supergirl is fun, fast, frothy entertainment that dives right into the story with a breathless opening sequence bringing us “up to speed”. Kara Zor El comes to Earth nearly 18 years after her famous cousin, Kal El – Superman – and is followed by a prison ship (that conveniently crashes on Earth) which has escaped the Phantom Zone, Kara works for National City’s major entertainment conglomerate, run by Cat Grant (a waspish Calista Flockhart), while her sister Alex (former Grey’s Anatomy star Chyler Leigh) works for a mysterious government organization. When a jetliner runs into trouble over the skies of National City, Kara leaps into action to save it, revealing herself in the process, before her sister has to haul her up to help stop the escaped Kryptonian prisoners.

Supergirl is as far from the drudgery of Man of Steel as you can get – recent internet buzz is that the series isn’t set in the cinematic universe established by Zach Snyder – and, if it ever happens, will make for a superb crossover between Arrow, Flash, and the upcoming Legends Of Tomorrow. Melissa Benoist is an energetic (and hot) Supergirl, and while the show is set up for a “villain of the week” narrative, you get the sense that the production looked at The Flash and went “yeah, we wanna do that”; it remains to be seen how the show will progress with a Big Bad (one was depicted here, but it’s unclear to me who it was, and how they’ll interact with Supergirl this season) in light of her powers. Speaking of powers: Supergirl’s don’t feel as well defined as they could be. We know, in the pilot she’s a “newbie” at the superhero stuff, but there’s a but of confusion for us as to exactly how “super strong” she is, what level of invulnerability she has, and things like super speed and heat vision and all that all come into play.

Regardless of all that, the new Supergirl looks fantastic, and we really hope it takes flight into audience popularity.

Fresh out of the UK, the new sci-fi series Humans looks to retread similar plots to Bicentennial Man, Spielberg’s AI: Artificial Intelligence, and smidgens of I Robot. The premise involves an alterni-Earth, where robotic avatars, known as “Synths”, exist to service humanity’s needs, analogous to current times but with this unique twist. However, the technology behind the robots appears to have come at a cost, in that humanity is approaching a point where artificial intelligence is possibly superseding our own. Plus, some of the Synths have started to exhibit signs of behaviour that broach their original programming.

The series has a number of big names to international audiences – Merlin’s Colin Morgan stars as a guy trying to track down somebody from his past, and William Hurt as the guy who helped invent the Synth technology and who now lives an isolated life with an early model robot by his side. The visual effects look excellent, the acting is generally above average, and the visuals on the series look like superb. It’s one to keep an eye on, we think.

Netflix’s most recent binge-watching new series comes from The Wachowskis, and is called Sense8. Now, we’ve seen the first few episodes and can attest that it’s as as densely packed with ideas and concepts as the siblings’ previous feature film, Cloud Atlas, and no doubt will take some getting into for newcomers to the series (which is everyone). The series opens with a grungy Daryl Hannah “connecting” with each of the 8 humans who have a mysterious psychic link, and takes some getting into. Like many of the Wachowski’s projects, they’re unafraid to take risks with their storytelling, and Sense8 is no different. If you’re into hard sci-fi and concepts that stretch your expectations, give Sense8 a watch. We think you’ll be impressed.

You’d have to be living under a rock these days to have not at least heard of current hot zombie property The Walking Dead. Now into its fifth season, the show has gone from strength to infuriating strength on the back of enormous fan anticipation and expectation. Naturally, the show deserved a spin-off, and so Fear The Walking Dead is upon us, set to debut globally in August. If you’re a fan of TWD, you’ll already be aware of this, and no doubt have your DVR set to record the shit out of it. Everyone else probably doesn’t care. Still, keep an eye out for Fear The Walking Dead to become the hot topic of water cooler conversation at work in the next few months.

Canadian sci-fi is alive and well with the premiere of Dark Matter a fortnight ago. We’ve watched the first episode, and we’re intrigued, definitely. It’s a frightening premise with plenty of promise; here’s the pilot episode synopsis courtesy Wikipedia:

Six people awaken from stasis to find they are on a ship in space but have no idea who they are. They are then attacked by an android and later shot at by another ship. After escaping, they arrive at their ship’s intended destination: a colony on a planet waiting for a shipment of weapons like the one they are carrying, to defend from an approaching threat. They then learn from the decrypted ship’s files that five of them are wanted murderers and they’re not, as they had believed, here to help the people in question: they’re here to kill them.

It premiered on Australia’s SyFy channel back on the 13th and looks the goods.

Yeah, we’ve seen about half the first season of the latest crime thriller binge watching series, Aquarius, which stars David Duchovny as a cop in the 60’s on the hunt for a missing girl, and crossing paths with one of the America’s most notorious killers, Charles Manson. Although the series is exceptionally watchable, mainly for Duchovny’s terrific performance, and for ex-Game Of Thrones actor Gethin Anthony’s hypnotic turn as Manson, the problem for me is that the series is largely fictionalized – it stipulates this at the opening of the show, so there’s no confusion for the audience – which really works against the show in that it would have been inordinately better if it had dealt with the true events. Fictionalizing actual people to the point where they behave in fictional manners is problematic from a story perspective because you’re not beholden to actual history – a little like Humans, in that way – but can simply write your own. It’s a little thing, but one I think holding Aquarius back from being truly extraordinary. Duchovny is supported by a terrific cast and fabulous period-detail production design. If you can see it, do it.

Last year, Matthew McConaughey and Woody Harrelson acted well outside their comfort zones in mega-small-screen-hit True Detective, the first season of an anthology series that is now about to debut its second hugely anticipated season in a few short weeks. Season 2 stars Colin Farrell, Rachel McAdams, Taylor Kitsch and Vince Vaughn, and although early preview reviews have been a tad underwhelming, I’m holding out hope that the gritty style and realistic crime thrills of the first season will be carried across into the next. The only real worrying point on Season 2 is the inclusion of Vince Vaughn, who has the potential to sink this thing if he’s doesn’t avoid his usual schtick. Remains to be seen, but if you’re reading this and haven’t seen the first season, you should, and then catch up with season 2 when HBO debuts it on June 21st (US time).

Finally, in case you missed it, the latest season of Orange Is The New Black debuted on Netflix over the past week, and while we’re binge-watching the first two seasons to catch up, apparently the third season is the sexiest and best yet.