Director :  William Eubank
Year Of Release :  2014
Principal Cast :  Brenton Thwaites, Olivia Cooke, Lin Shaye, Beau Knapp, Robert Longstreet, Laurence Fishburne.
Approx Running Time :   95 Minutes
Synopsis:  After apparently being taken by aliens, a young man and his friends find themselves inside a nightmarish facility, being interrogated and held captive by government agents. Or…. are they?
What we think :  A mind-bending sci-fi thriller, The Signal starts strong, continues in the same vein, before collapsing in a heap at the end. The Signal has plenty of style – so much so, it’s almost a given that Eubank will end up helming a major Hollywood tentpole one day – although it does crib from a number of other genre films for both style and plot device. There’s plenty to savor here, however, so fans of sci-fi who aren’t afraid to tickle the grey matter will most definitely enjoy it.

The last few years have produced a number of low-range, surprisingly effective (if not always successful) science fiction films that fly in the face of cookie-cutter clones Hollywood’s so eager to produce. Films like The Human Race, Splice, The Colony, The Machine, and Europa Report (which is more sci-fi than horror, truth be told) spring to mind as similarly underdog performers that actually deliver their concepts with a high degree of skill, and a definite style that is hugely memorable. Count The Signal as another contender; with a startling visual aesthetic, a highly stylized narrative and premise, and some creepy, non-confrontational visual effects, The Signal is a remarkably entertaining, utterly baffling who/whatdunnit that fans of independent sci-fi will absolutely love. Like the rest of the films I’ve just mentioned, The Signal isn’t perfect, and no doubt there will be some who come away from it with a little bit of annoyance, but I think as a total entertainment experience, The Signal delivers in a most chilling, melancholy way. 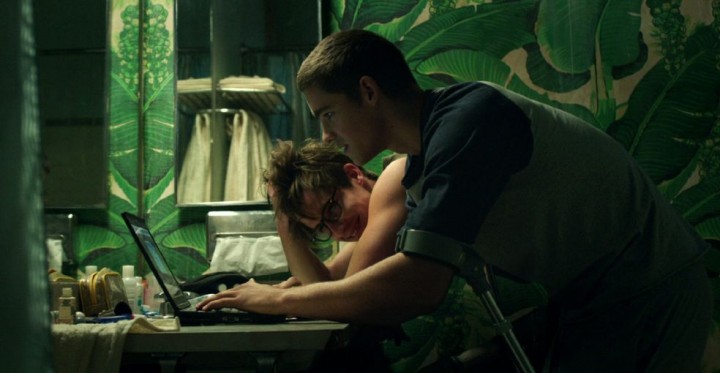 I’m not sure how we purchase children over the internet, but putting a status on facebook isn’t it.

MIT Students Nic (Brenton Thwaites), Jonah (Beau Knapp) and Haley (Olivia Cooke) are traveling to California to drop Haley at a new campus, a fact that’s driven a wedge in Nic and Haley’s relationship (along with the fact that Nic is suffering the early stages of muscular dystrophy). Along the way, they make contact with a computer hacker codenamed Nomad; using their phones, Nic and Jonah deviate out into the Californian desert to track down a signal which they hope will lead them to the mysterious hacker – they end up at a deserted location, where they appear to be abducted by aliens. Waking, Nic learns finds himself inside some kind of government facility, where he is interrogated by a man wearing a bio-hazard suit named Dr Damon (Laurence Fishburne), although his whereabouts, and the location of his two friends, the official keeps secret. Eventually, Nic finds that Haley is being held in another room in a coma, while Jonah seems to be talking to Nic from inside an air-vent within the facility, which Nic believes might be inside Area 51. After escaping, Nic and Haley encounter a crazy old lady (Lin Shaye) who helps them out, as well as a nasty truck driver (Robert Longstreet), all the while pursued by Damon and his air-suit-wearing cronies. When Nic and Haley eventually try to flee, they uncover the real reason they’ve been held by the government, and it’s something neither of them will ever forget.

Hi! I brought the pizza?

The Signal begins relatively benignly. A largely unobtrusive human drama seems to play out, as the relationship between Nic and Haley is given predominance in the early going, before things start to take a sinister, and often frightening turn. Images of a lush, relaxing forest landscape populates the opening credits, none of which gives any indication as to the nightmarish film which eventuates at about the twenty minute mark. This calm before the storm approach allows the trio of primary characters to be given some development, some of which works (Nic, Haley) and some of which doesn’t (Jonah), but allowing for a fairly clumsy set-up and non-linear approach to the storytelling, The Signal opens well. Then things get weird. The two boys decide to investigate the inside of an abandoned, shrouded-in-darkness old house out in the desert, and the film goes into “found footage” mode for a bit, before the shock-and-awe of possible alien abduction kicks in, and the film then rests entirely on it’s “Area 51 facility” narrative.

Until then, it’s a fairly effective, slow-build of tension (between Haley and Nic) that gives the viewer no real idea of what’s to come. As the sequences involving Nic trapped in the facility with Damon begin to unfold, what opens as a fairly standard prisoner/interrogator narrative slowly, ever so slowly, evolves into something more terrifying. Fishburne’s Dr Damon, who tries to maintain a sense of calm and mysterious, “you don’t know what’s out there” superiority, is initially passive and relatively friendly, yet his refusal to answer certain questions, certain basic questions, leave the viewer uncertain as to his motives, and ill-at-ease with the scenario entirely. The film spends a large portion of its latter two thirds working on this unease, drawing the viewer in as it unwraps the mystery, tightening the noose, and eventually spilling its seed within the final two or three minutes. 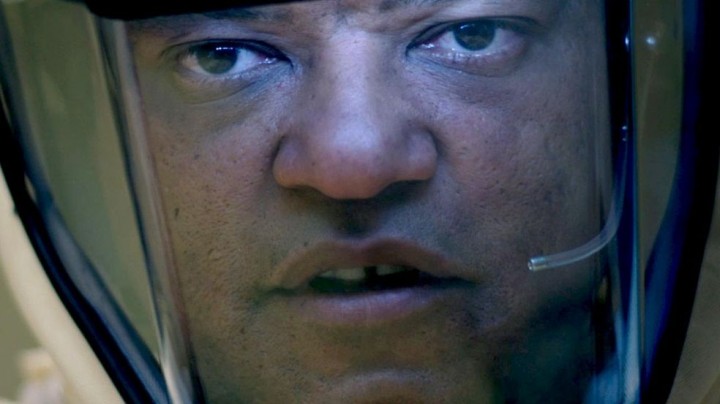 So THAT’S what it looks like with its clothes off….

Irrespective of your appreciation for the story, though, there’s no denying the film looks amazing. The superb cinematography, by DP David Lanzenberg, is soft and luscious, crisp and monotone, dirty and juddery, in all its moments of requirement. The film’s final third has a similar visual tone to District 9’s rapid-shutter effect, a crucially effective style within The Signal’s more “alien” subplot, while the opening dream sequences, cross-country journey and even moments in the last half, all retain that deep-focus, saturated colour palette that belies the endgame for the story. Nima Fakhrara provides some really nice music scoring, effectively evocative and yet never overblown or intrusive. Kudos to director William Eubank for giving us a film with plenty of style. 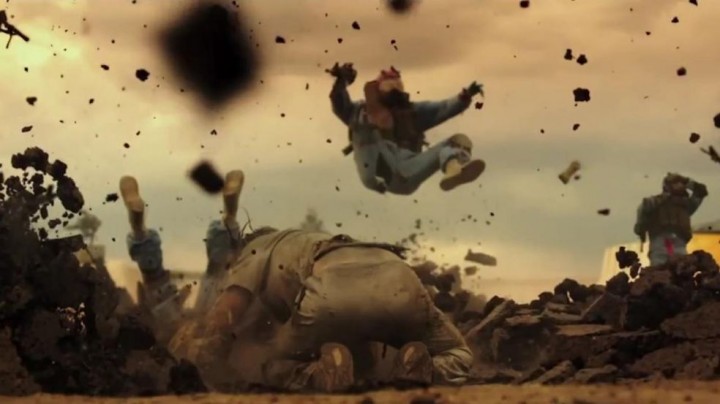 The cast are admirably solid, although hardly revelatory. Brenton Thwaites traverses the multiple emotional levels this film calls for with commitment and dedication, and aside from some moments of smack-the-forehead bone-headedness, he’s quite good, if somewhat underwritten. Olivia Cooke’s character hardly worries those screaming about Bechdel tests, and Beau Knapp’s Jonah, who is easily the more interesting of the trio overall, is removed from the story almost entirely for long sections, returning late in the piece with some confusing, convoluted expositional material that feels hacked into place rather than organically written. Fishburne, as Damon, is alternatively chilling and cackle-worthy, as he channels Morpheus once more with that “I know something I’m not telling you” bullshit that was barely worth it in The Matrix Revolutions. Lin Shaye pops in as a crazy woman, and is creepy as hell, while Robert Longstreet has a small but effective role as a trucker who comes to confront Nic and Haley during their escape. 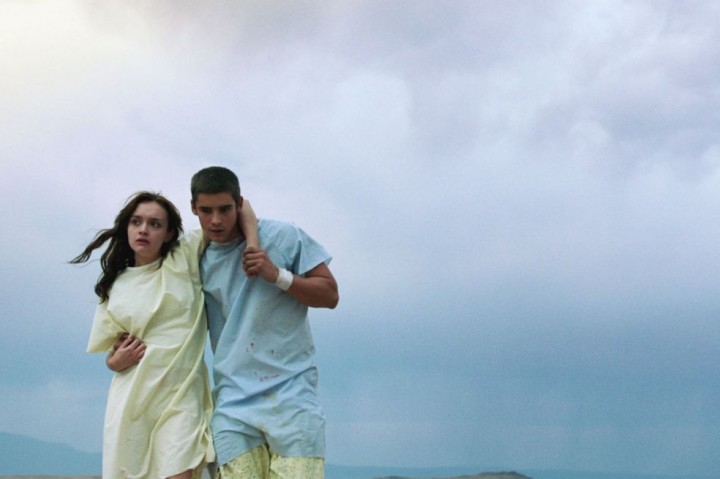 Are we seriously trying to outrun this movie?

The Signal has one minor problem: its ending. Eubank’s focus on giving the film so many twists and so many gotcha moments, of which the conclusion is one of those downbeat, “oh crap” reveals, really doesn’t feel as worthwhile as the film is building to. It’s a rug-pulled-out moment that doesn’t quite work like it should, although I guess that could be me just being a jaded, cynical douche who eyeballs stuff like this with a harsher eye than most. Generally, The Signal is really, really good, a slow build of ideas and puzzles that gradually become clearer just as the closing credits start to roll. Fans of these low-fi kind of genre flicks will be most pleased in discovering this one. I know I was.