Director :   Robert Stromberg
Year Of Release :   2014
Principal Cast :  Angelina Jolie, Elle Fanning, Sharlto Copley, Sam Riley, Imelda Staunton, Juno Temple, Lesley Manville, Brenton Thwaites. Kenneth Cranham, Hannah New.
Approx Running Time :   97 Minutes
Synopsis:  The story of the fairy Maleficent, who is slighted by her first love, a human, and seeks revenge through his eventual daughter.
What we think :  You know, it’s actually pretty good. It stumbles around a bit in the middle, and some of the character arcs (especially Copley’s King Stephan) aren’t that great, but on the whole Maleficent is reasonably diverting entertainment. The effects are lavish (but suffer from typically Hollywood hollowness) and the scope of the film is tonally far darker than Disney’s Sleeping Beauty (meaning young tots shouldn’t watch it), yet in spite of its often self-deprecating flamboyance and nod-wink hints to the the animated classic, it still entertains.

Once upon a nightmare.

Like most cynical film fans, with the announcement that Disney was producing a live action reworking of its Sleeping Beauty film, only with key villain Maleficent in the lead role and central focus, I found myself scratching my head and wondering if it was a story we really needed to see. To be honest, I’m still scratching my head, but at least I can answer that question honestly. Nope. We didn’t need to see this, but for what it is, and does, Maleficent does a fair job at “modernizing” the classic story for a younger generation, even if much of the film riffs on Disney’s own template for the story (with mild, and not-so-mild, twists) and goes to dark, nightmarish places in search of itself. While the animated Maleficent remains one of the Disney canon’s most iconic villains, the project to soften her image and make her…. less evil and more misunderstood, felt a little too much like a hard sell, although you got the sense that when the almighty House Of Mouse put their marketing department into the same room as the screenwriter, a whiff of blockbuster success could be almost tasted. Does Maleficent stumble too broadly in this vivid, CG-driven re-imagining, or is the good ship Sleeping Beauty find itself overshadowed by its slicker, sharper recent cousin? Is Maleficent worth the glorious makeup on Angelina Jolie? 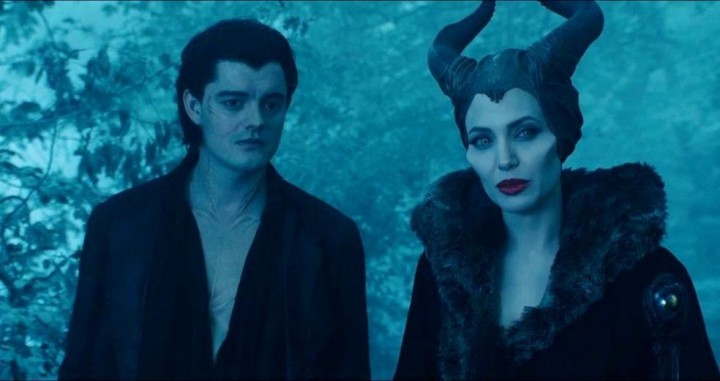 In a far off land, two kingdoms exist in a state of mutual distrust and hatred. One, the human world, is ruled by a paranoid and belligerent king (Kenneth Cranham), while the other world, known as the Moors, are ruled by the benevolent faerie Maleficent (Ella Purnell), who guards her land from incursion from humans. One day, a young human boy, Stephan (Michale Higgins), attempts to steal a jewel from the Moors, only to be discovered by Maleficent. Stephan and Maleficent become friends, before the eventual lure of power and wealth lead Stephan (Sharlto Copley) to work in the castle of the King, who jealously covets the Moors for himself. The King strikes a deal – whoever bring the head of Maleficent to him, will take the throne upon his death – Stefan, blinded by ambition, tricks Maleficent (Angelina Jolie) with a potion, and removes her beautiful wings, rendering her flightless. Betrayed, Maleficent turns the Moors into a dark and frightening fortress. Some years later, King Stefan and his Queen (Hannah New) have a daughter, Aurora, who is blessed by three tiny faeries (Imelda Staunton, Juno Temple, Lesley Manville) during her christening ceremony – a ceremony interrupted by Maleficent, seeking revenge on Stefan; she curses the tiny child to a sleep-like death on her 16th birthday, a curse that can only be broken by “true love’s kiss”. In order to protect Aurora from Maleficent’s curse, Stefan sends his daughter away with the three faeries to be cared for, although as the girl grows up and approaches her sweet sixteen (played by Elle Fanning), Maleficent grows attached to her, forming a bond and giving Maleficent pause to reconsider the curse. 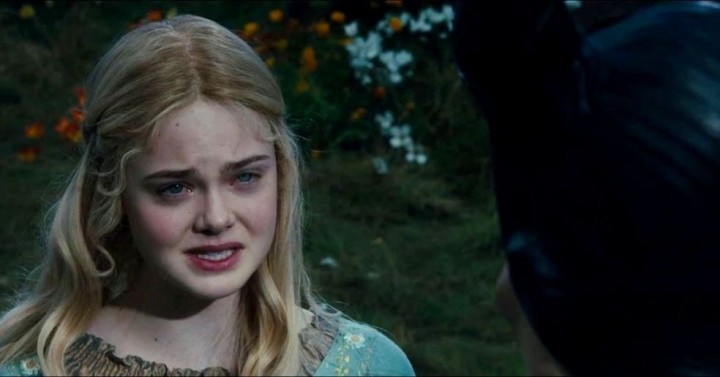 The most pleasing thing about Maleficent is that it isn’t afraid to take the well-known story in a different direction. That’s probably the most prescient thing I can say about the film. Sure, for a large portion of the movie there’s the well-trod path of narrative granite that everyone alive today would know, such as the young Princess being seconded into the care of three wholly unsuitable fairy women, and the arrival of Prince Phillip from a far off land as Aurora’s intended “true love”, while Maleficent herself delivers a number of lines lifted directly from the animated film version of the story. Yet, in re-branding Maleficent as a “misunderstood character” decades on from her truly villainous appearance in Sleeping Beauty, there’s a lot of room to wiggle the nuance out of a story as old as time(ha!). 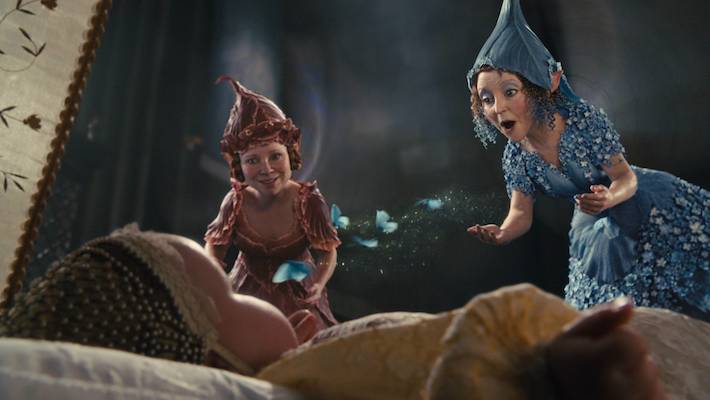 How the hell did you push this out?

The film-makers have cannily crafted a different Sleeping Beauty character as the “true” villain of this “real life” story. King Stefan, here essayed by a wild-eyed Sharlto Copley (does he do it any other way, I ask you?) takes the role of the nemesis to be feared, a man driven by power and paranoia who throws away a relationship with Maleficent for the sake of obtaining power. Maleficent is now a sympathetic character, with smoother lines and a more involving backstory than that provided against Aurora’s hopeful radiance in Sleeping Beauty. Does this work for the character? Yeah, it does, kinda. Does it stand up to what came in the animated film? Almost, but one can take this live-action revisionism with a pinch of fairy dust, I wager. Maleficent’s journey from engaging heroic character (defending her lands from the tyranny of human invasion) through to vengeful dark-spirit (Stefan, in a crucial scene on which the entire film hangs, actually cuts off Maleficent’s wings while she’s asleep – drugged – believing the man to be kind and good), and back again to maternal, tender, god-motherly figure. It’s an interesting transition, and one I think works as well as it does due largely to Angelina Jolie’s affecting performance. 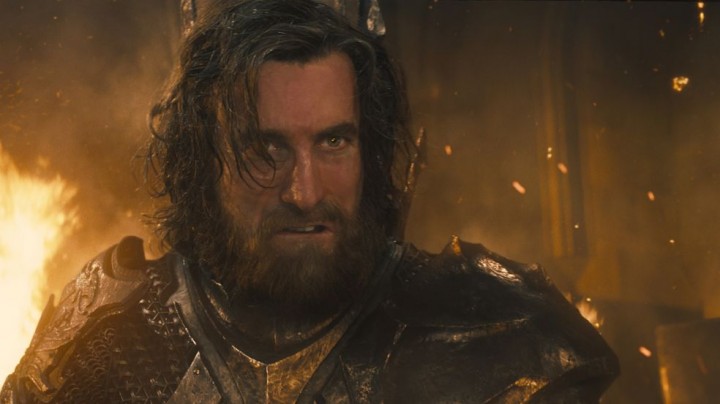 I’m wild and wicked…. don’t screw with me!

Jolie towers over this film, as Maleficent. Her ability to morph into the character is seamless, her re-purposing of Eleanor Audley’s vocalizations from Sleeping Beauty sending shivers up my spine. Jolie carries the emotional weight of the film almost in its entirety, although in saying that it’s not like she has much choice, for no other character aside from perhaps Stefan has the same development, with Aurora, the three good fairies, Prince Phillip and the other hangers-on all pretty much 1-dimenstional replacements for their animated counterparts. Elle Fanning’s portrayal of a teenage Aurora is all smiles and light, and she’s certainly up to the challenge of personifying such a faultless human being, but her character offers no real light and shade, no variance in emotion other than to get a little annoyed when it turns out Maleficent is the one who cursed her in the first place. Bummer, eh? No, Maleficent works only because of Jolie, who radiates vengeance when she gets all annoyed with Stefan, cold malevolence when dealing with the newborn Aurora, and inevitable softening as she realizes that her curse is unfounded. Were Jolie unable to get into the role, it’s doubtful the film would work as well as it does, or at all, for that matter. 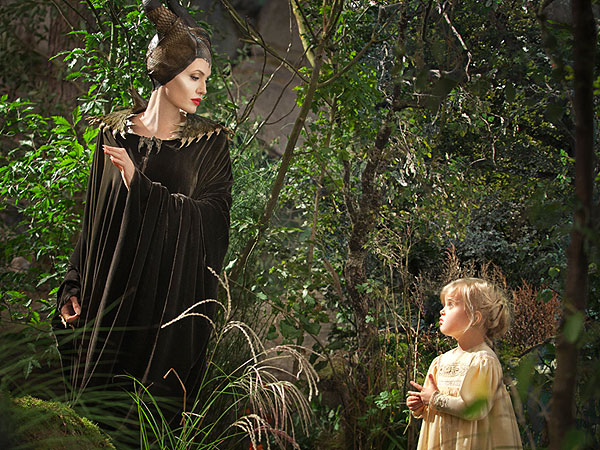 Seriously, which one of my gazillion adopted children are you?

The film spins the story of Sleeping Beauty on its head a few times too. Maleficent takes a few different routes to its conclusion, a conclusion vastly different than Beauty’s more family-friendly tone. Stefan’s insane obsession with Maleficent is new, as is the complete lack of Prince Phillip being in the story after he kisses Aurora while she’s “asleep”. Maleficent’s blackbird, here known as Diaval – and played by Sam Riley – becomes the dragon at the end of the story, which is different, and Maleficent’s wings are pivotal to the conclusion of the movie. Aurora isn’t the tall, beautiful woman of Disney’s animated canon, but a short, blonde-haired teenager with a vaguely pleasant disposition. The three fairies, here known as Knotgrass, Thistlewit and Flittle, are brought to life with a somewhat creepy layer of digital trickery in their smaller forms (the heads, their heads don’t fit the bodies!), and unlike Beauty’s more agreeable tone, here couldn’t organize an orgy in a brothel for all their parenting skills. 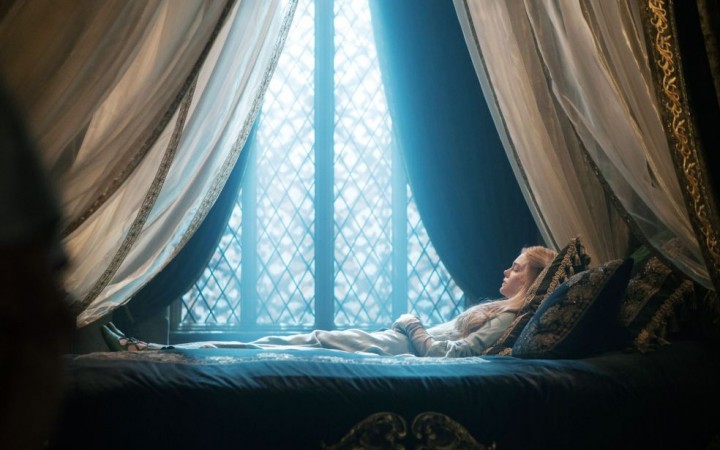 And Maleficent is dark. Man, it goes places Walt himself would have baulked at. Maleficent’s horrific reaction to her wings being sawn off by Stefan is palpably skin-crawling, a truly heartrending moment in a film filled with all manner of light and fluff, dark and terror. The film relies heavily on its use of CG, with landscapes, creatures and effects all brought to life by some stunning computer power, although the realism involved with the events as they transpire offers audiences a truly dark look into what should rightly be a nightmarish scenario for all. A young girl cursed to an approximate death? A wicked magical fairy with powers beyond those of mortal men? A magical dragon? A host of other supernatural beings rising up to defend their world against human invasion? Pardon me if this isn’t the Sleeping Beauty you knew as a kid. This film is definitely aimed at an older market. 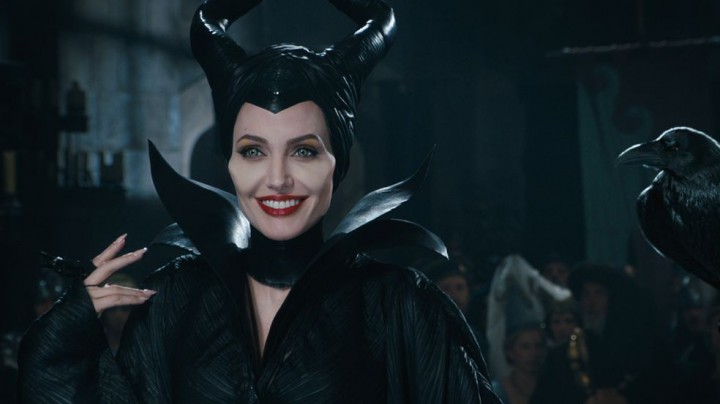 This latex and rubber feels nice against my skin!

As much as Disney hoped this would be the be-all-end-all of Sleeping Beauty’s story, Maleficent does have its share of issues. Jolie aside, the film lacks depth in its supporting roster, and whenever Jolie isn’t on the screen the film falls a little flat, almost lacking in any urgency. The visual effects and action sequences are generally handled with aplomb by debut director Robert Stromberg, who handled production design on Disney films like Alice In Wonderland and Oz The Great And Powerful, yet he couldn’t seem to muster a real sense of wonder about Maleficent’s “generic fantasy-land world” of the Moors, with its hobgoblins and misshapen faerie folks. Maleficent looks big-budget, and feels it most of the time, but Stromberg can’t quite deliver on the quieter, reflective moments like he should. Fans of the original story might find more to fault with Stromberg’s heavy approach to the material than I did, but as a technical exercise it’s not too bad. 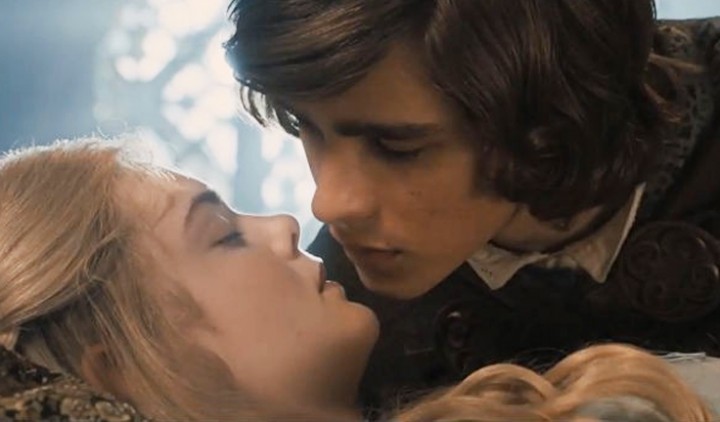 Wait…… is that a coldsore?

Maleficent is a film that didn’t really need to be made. Half the fun of the film is watching a modern take on the Disney version with up-to-date effects. Young tots unaware of the animated film’s existence will probably miss a lot of the in-jokes and tips-of-the-hat Stromberg and his team insert, but most of an age to watch this will still enjoy it, regardless. Jolie is quietly menacing and soulfully empathetic, the effects are effective, and the tone of the film darkly unexpected; with caveats to the depth of character development, Maleficent is an urgently menacing, bombastic journey into fantasy and horror-tinged adventure.