Once Toy Story, which was rightly hailed as a modern classic, was released to the public, Pixar still had four more films to go with their 5-picture deal with Disney in order to fulfill their obligations. With A Bug’s Life already in production, and on the way, the sequel to Toy Story was planned as a direct-to-video affair. When Disney saw how good the images for Toy Story 2 were looking, they decided to fund the film as a full length theatrical feature. This led to some conflict between Pixar boss Steve Jobs and then-Disney head Michael Eisner, the former feeling that the new film should be a part of the 5 picture deal, and the latter thinking it was not, since it was originally intended as a DTV piece. 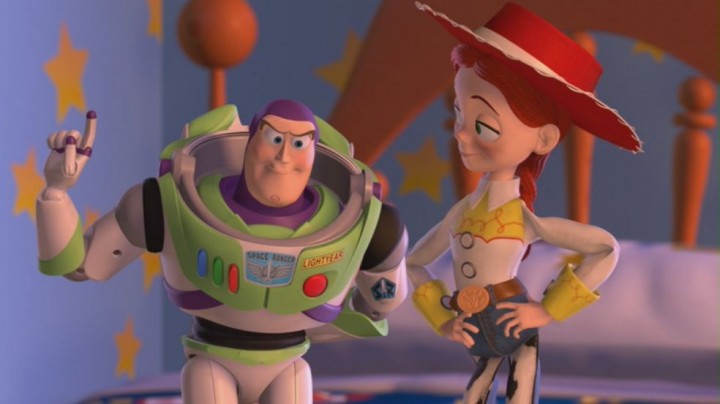 It would be the only time Buzz ever said the words “Au contraire” in an actual sentence.

Regardless of the politics involved, Toy Story 2 kicked off some time after the original film, story-wise, with Andy a little older, and a little wiser. Woody and Buzz, having now acclimatised to each other, have trained the family’s new puppy to obey their orders, something Andy has been unable to do himself. Things are going great, until Andy and his family hold a garage sale, and one of the toys is put up for purchase. Wheezy, the toy penguin with a broken squeaker, is about to be sold, however, Woody and Buzz have a plan to rescue him. Using the puppy as a “horse”, Woody makes his way to the front yard, and manages to save Wheezy. However, just as he is nearly safe, he falls from the puppy, and is picked up Andy’s mother. A toy collector, voiced by Wayne Knight, spots Woody and offers Andy’s mum a small sum of money for the toy, even though the woman admits he’s not for sale. The collector, Al, uses an underhanded method of subterfuge to effectively steal Woody, and kidnaps him. The other toys are beside themselves with anger and worry, and begin to concoct a plan to rescue their fallen rescuer. 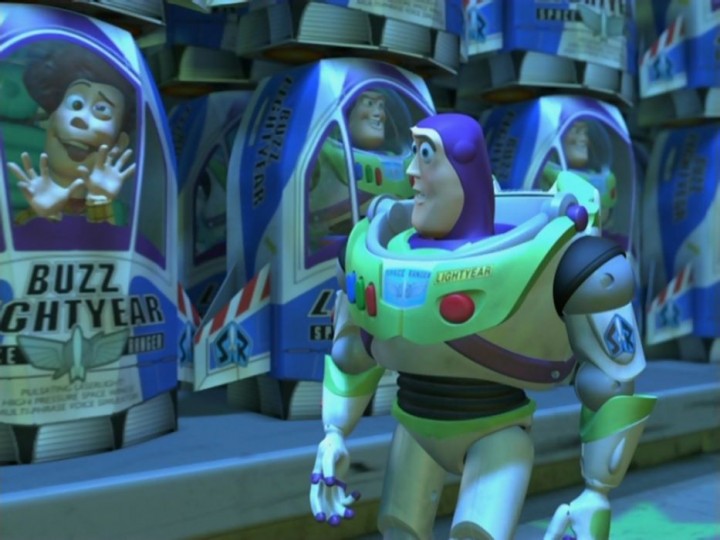 Toy Story 2 is a technically superior film to it’s predecessor in almost every way, and creatively, it’s an order of magnitude better. All the original cast return to voice their original roles from film 1, and with the addition of Wayne Knight, Joan Cusack and Kelsey Grammar (the latter two playing Jessie the Cowgirl, a counterpart of Woody’s, and Stinky Pete the Prospector, another of Woody’s line of toys, respectively) the film is broader, more epic, then before. Yet, unlike most film sequels, which are diminished and (usually) poorer quality, Toy Story 2 retains the same strengths and abilities of its predecessor, the story is strong, the characters well developed, and the animation is, again, technically brilliant.

Meeting Woody and Buzz again is like slipping into a pair of old shoes: instantly comfortable and easy to put on. You feel relaxed, like you know them so well. It must have been a stretch for the writers to not become bogged down in the characters’ own personalities, their own arcs from Toy Story, that they couldn’t allow them to grow. Woody and Buzz, you think, have gone as far as they can as characters in the original film. The screenplay, which involves themes of abandonment and loss, as well as those of finding family and treasuring what you have, is again resplendent with the kind of magic the original film delivered in spades. Plus, the scope of the film, with the plethora of additional characters (including Buzz’s chief toy-based villain, Emperor Zurg) is a lot more layered, allowing the writers and filmmakers to develop ideas and characters in a way that was beyond them in the original. 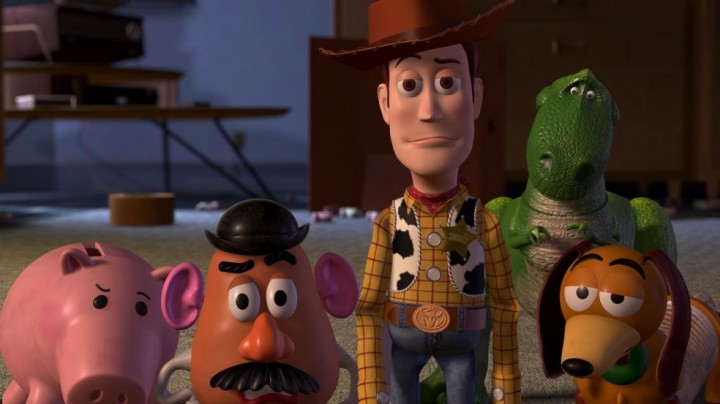 Seriously, you can’t be serious.

By far the biggest character arc in the film is reserved for Woody, whose discovery of his original toy line and genesis is both profound and heartbreaking, as he realizes that he is among one of the world most collectable items in the toy industry. Al, the overweight, disgusting slob of a man with no moral centre whatsoever, is planning on sending Woody and his brethren, Jessie and Stinky Pete, as well as the toy horse Bullseye, to Japan as a complete set of Woody’s Roundup toys. Woody’s Roundup, a fictional Saturday morning animated show from televisions early years, shows Woody as the central character in the series, bringing children joy across the country, although, as Stinky Pete relates, the show was cancelled unexpectedly, leaving Woody and his friends to fade into the obscurity he now enjoys. Woody sees this show, and the plethora of marketing paraphernalia that Al has collected (from lunch boxes to records, to clothing and other items of manufactured joy) as a vindication of his worth as a toy, something he has searched for his entire life. But coupled with this new-found purpose is his loyalty to his friends, and to Andy, how owner. Jessie, voiced by Joan Cusack, replays her own heartbreak from her abandonment by her owner, leaving her without a home, in a poignant moment in the film. Jessie sees children as toy-abandoners, people who cannot be trusted to remember their once favoured toys, and the fact that Andy still loves Woody as his favorite toy merely rubs salt into the wound of her past. The duo of Woody and Jessie, and to some extent Stink Pete, are the catalyst for the emotional center of Toy Story 2. 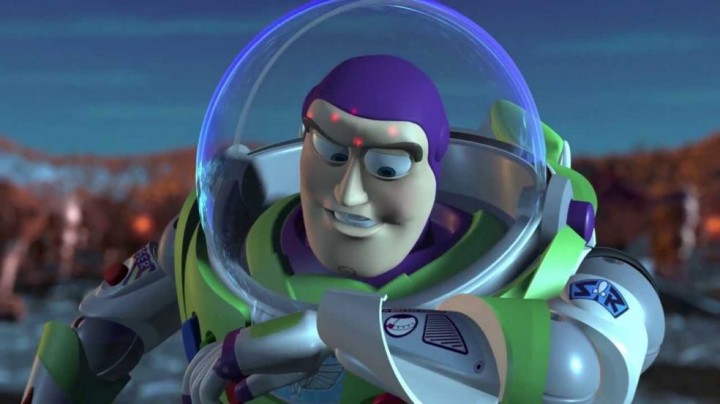 KITT? Is that you?

Buzz, meanwhile, has to become the heroic figure he often touts himself as, as he leads the gang of Andy’s toys to rescue Woody from Al’s clutches. While his adventure in this film is perhaps more comedic than dramatic, his ability to cohese his fellow toys (again, Hamm, Potato Head and Rex all add their own personalities to this venture, and not always in the most constructive ways… their hearts, however, are often in the right spot) is the main thrust of his narrative. Tim Allen brings his voices swollen sense of pride and arrogance (a trait he honed on Home Improvement) into a character that’s as forever linked with Allen, as Allen is linked with Buzz. However, Buzz isn’t the same swell-headed character we saw in the original film by a long shot. He’s more understanding, more adventurous, and while still being fairly hot-headed in his decisiveness, is able to think and plan a course of action that will save both his friend (Woody) and those around him. I think Buzz in this film has a lot more depth as a character, even though perhaps he’s not the central storyline this time around. And with the characters limitations overcome from film 1, the writers must have been struggling with what to do with him. Personally, I think they did a great job, and a tip of the hat to them for one of animations great opening sequences, with Buzz attempting to break into the lair of Emperor Zurg and steal his power (!) in a sequence that’s chock full of references to films like Star Wars. Gary Rydstrom, one of the sound men who worked on Star Wars, is a man whom I regard as one of the great talents of the industry, and I think his work on this film is sublime.

As a side note, for those pondering just what I consider to be the greatest opening to an animated film, I should tell you that that honor goes to the introduction of Scrat in Ice Age. 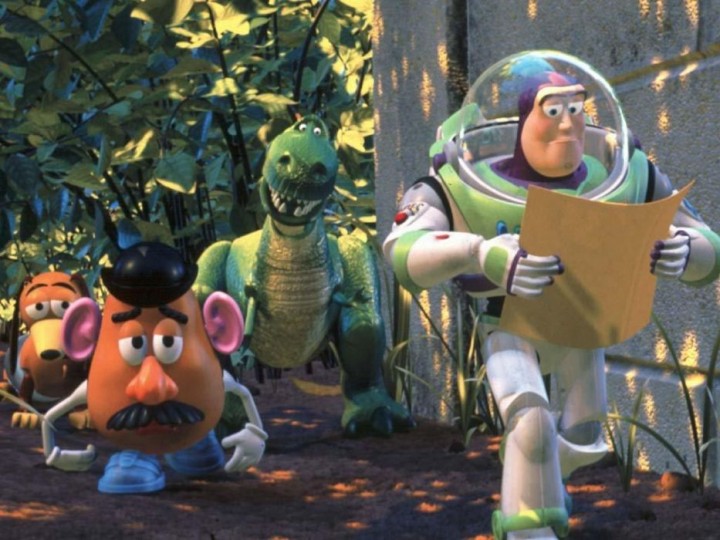 I swear, if you don’t get us to the brothel soon, there’s going to be a Buzz right up your Lightyear.

It’s hard to imagine that a sequel to Toy Story could, in any way, be better than the original. Yet, John Lasseter and his team have crafted, nay, molded, an example of defining storytelling and animation. The level of detail in Toy Story 2 is so far beyond the original it beggars belief, and with a story potentially more complex to deal with, handling all the relevant points of the narrative could have been quite tricky. The emotional beats of TS2 are plentiful, and scattered liberally throughout the story. Of course, it’s a Disney film too, so the ending is practically a foregone conclusion… although not so much that you find yourself thinking about it while watching. Such is the power of this film you find yourself seeing it as “real”, that is, not an animated film at all, but rather as live-action film of real toys doing real things. Well, I did, anyway. You may not, but then, if you can’t appreciate the art of this film, then you shouldn’t appreciate art, period. 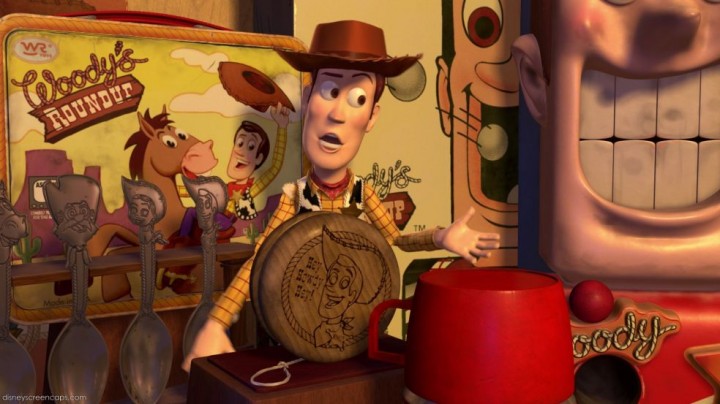 In the pantheon of animated films, particularly those of a computer variety, Toy Story 2 ranks about as high as you can get, and for a while stood as the single most successful animated film of all time, only behind The Lion King. Of course, a few years later it was succeeded in this by runaway hit Shrek (which was superseded again by Shrek 2!) but as far as great storytelling, wonderful animation, and a dedication of it’s craftsmanship by those on the computers and at the storyboard, Toy Story 2 remains one of the defining animated films of this generation. 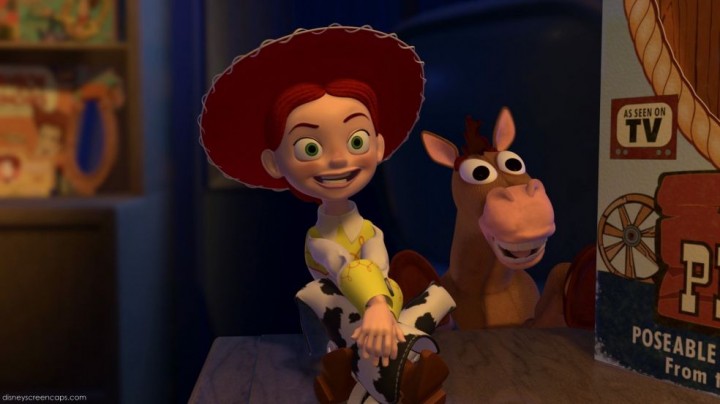 It’s a fair call to say that every CG animated film released today owes a debt of gratitude to Toy Story, and to Pixar generally. Without their immense talent, and the driving force of one John Lasseter, we would not now be blessed with such magnificent films as WALL-E, The Incredibles, Shrek, and Finding Nemo. Yet for all the advances in computer animation, with more technology to develop realistic hair and clothing, fur, and effects of light, Toy Story told one of the best stories for a film ever, as simply as it can be done. Minimal fuss, a solid foundation of character and class, witty dialogue and poignant performances by a great cast, Toy Story and it’s sequel remain, for me, the undisputed kings of all the CG films made since. 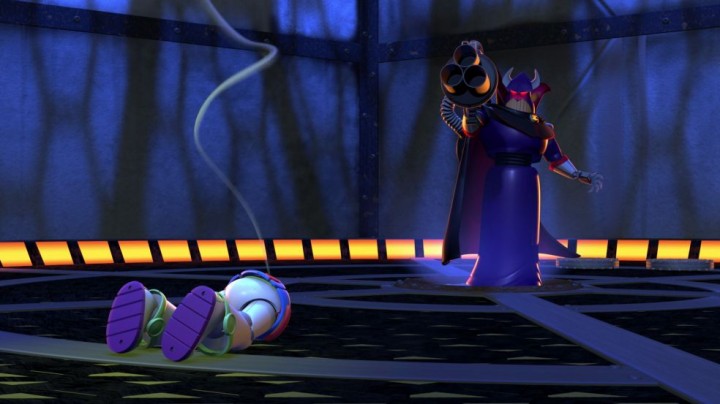 While some may decry the CG film as having less heart and soul than a traditional, hand-drawn work, I would disagree. While I cannot deny that CG films have been the catalyst for the demise of 2D art, which in itself is a terrible shame, these films have their own sense of life and destiny, the same care and consideration for story and heart beats within them as it did in the films Walt Disney himself created, back in the day. CG animated films, while looking cleaner, crisper and more suited to today’s audience, have a slew of different areas where they excel, over 2D animation. Some would say that since you’re using a computer to animate the film, you’re making a machine do it, rather than your own hands, with can be more “artistic” from a traditional sense. I respond to that by asking what the difference between a story hand-written or typed on a computer is? The soul of a film isn’t the way it was made, but rather, the idea of the thing itself. A handwritten book can have the same appeal as one typed into a computer, in much the same way that a 2D animated film can have the same emotional impact as a 3D version. It’s all about the story, and the emotional connection the viewer (or reader) has with it, not the format in which it’s presented.

Art is art, and as far as Toy Story goes, it’s some of the best kind.