Director : Jaume Collet-Serra
Year Of Release : 2014
Principal Cast : Liam Neeson, Julianne Moore, Michelle Dockery, Nate Parker, Linus Roache, Scoot McNairy, Corey Stoll, Lupita Nyong’o, Anson Mount, Bar Paly, Omar Metwally, Jason Butler Harner, Shea Wigham, Quinn McCoglan.
Approx Running Time : 106 Minutes
Synopsis: An air marshal springs into action during a transatlantic flight after receiving a series of text messages that put his fellow passengers at risk unless the airline transfers $150 million into an off-shore account.
What we think :  While it trips itself up occasionally on its own premise, and logic flies out the window (along with any passengers!), Non-Stop is still a reasonably satisfying mix of thrills and action, all held together by the rock-solid Liam Neeson. If Neeson wasn’t on song, there’s a high chance this film would have been utter crap – the Irishman salvages a lot here, plugging his now uber-cool action hero style into the silly, implausible plot and redeeming a lot for the audience. Non-Stop isn’t awesome, but it’s competent and commendable.

For those times you absolutely need a gun aboard a plane.

The hardest part about watching mystery-thrillers like Non-Stop is stopping yourself from trying to outguess the hero as to the “twist” or “reveal” before it actually happens. Somtimes, the film twists and turns so much it’s like a damn Moebius strip, outreaching all but the most intelligent viewer with its crucial climax. Other films tend to spoil themselves too early too often, leaving audiences aware of what’s happening but still assuming some mass delusion might have kept one or two folks from figuring things out. Non-Stop falls somewhere in the middle ground of this scenario – it’s a well played mystery thriller, although its third-act twist is jaw-droppingly out of left field, reducing a taut, terrific opening half or so into something less than it aught. 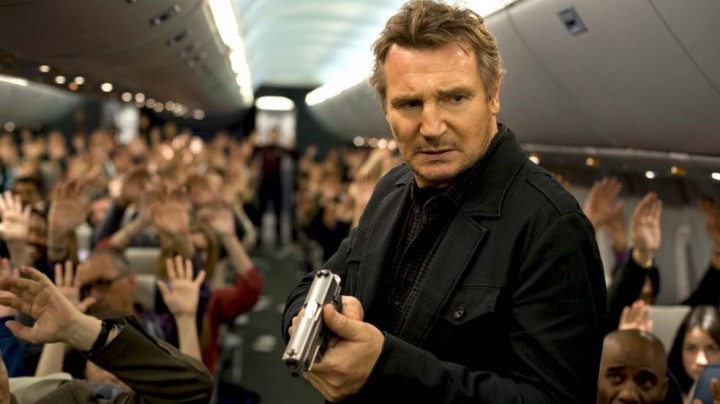 Bill Marks (Liam Neeson) is an alcoholic US Air Marshall, who is still affected by the death of his young daughter Olivia. Aboard a flight between New York and London, Marks receives texts via his Marshall phone informing him that unless he transfers $150 million into an account, people on the plane will start to die. Indeed, Mark’s fellow Marshall aboard, Jack Hammond (Anson Mount) is found to be smuggling cocaine aboard the flight, and after a brief struggle, Marks is forced to kill his partner. This sets off a chain of events with increasing tension, as Marks uses his authority aboard the flight to commence searching for the person responsible. He is aided by fellow passenger Jen Summers (Julianne More), although his actions begin to terrify the rest of those aboard, inevitably leading some to believe Marks has hijacked the plane. As more people wind up dead – including the pilot (Linus Roache) – and people start to think he’s gone rogue (including people on the ground, where a video of him going berserk on the plane hits the news!), Marks begins a frantic race against time to locate the killer and stop the plane from being shot out of the sky before it hit civilian airspace. 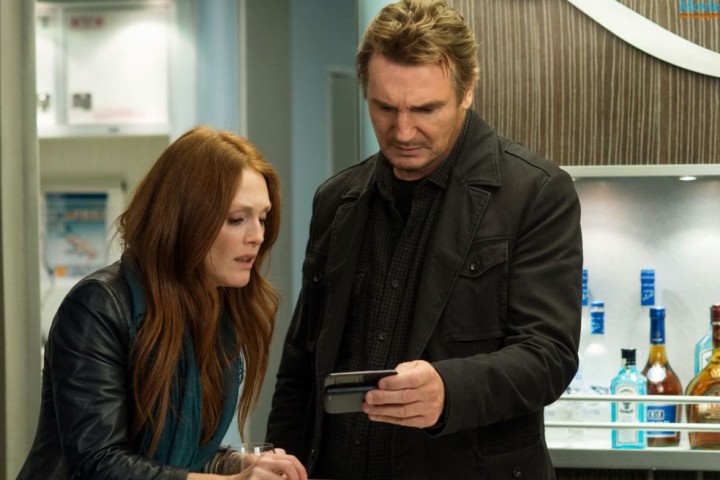 It’s all this sexting now. I don’t understand it.

All in all, I really rather enjoyed this film. As indifferent as that sounds, there’s a lot to like about Non-Stop: it’s a bread-n-butter actioner, carved from the same mold as any other “man in a box” scenario, albeit the cast in this box is rather large, and the box itself more a tubular cage of death. The plot is utterly insane, the kind of thing that worked both for and against Wes Craven’s Red Eye (another terrific “trapped in a plane” film), and at no point does logic or common sense ever really prevail; instead, the film relies on its fast paced plot twists and an abbreviated shorthand of fear around 9/11 and the holdover of a plane hijacking to generate much of its sweaty-palmed effusion. 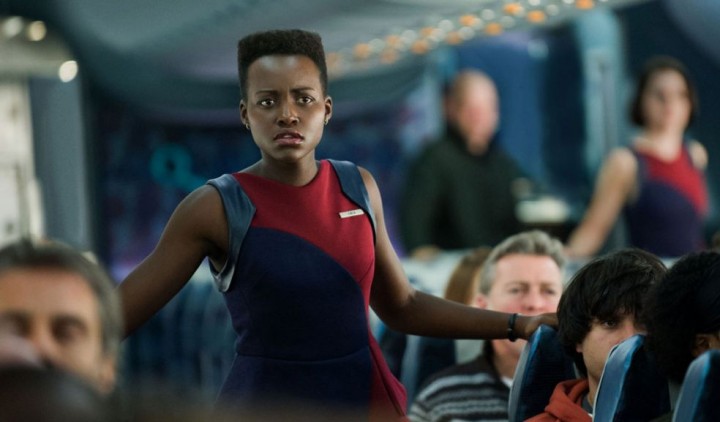 I won an Oscar and THIS is the film I star in next?

Like most people, I’ve developed a bit of a soft spot for “Action Hero Neeson”, since his career-revolution kicked off with Taken a few years back. While he’s had a misstep or two (ahemUnkownahem), Neeson’s large frame and expressive, I’m-gonna-f@ck-you-up hard-ass persona have really taken hold in the public consciousness. Honestly, while this kind of material should be beneath an actor of Neeson’s caliber, it’s nice to see that he takes it just as seriously as he might a Schindler’s List type dramatic work. Neeson’s sheer screen persona never wavers here, surrounded by a large ensemble cast (all of whom do solid work in support, especially Julianne Moore as a somewhat suspicious female passenger who befriends Marks) and while the script never stretches any of the characters dramatically, there’s enough inbuilt tension to the scenario that mitigates any weaknesses of performance. 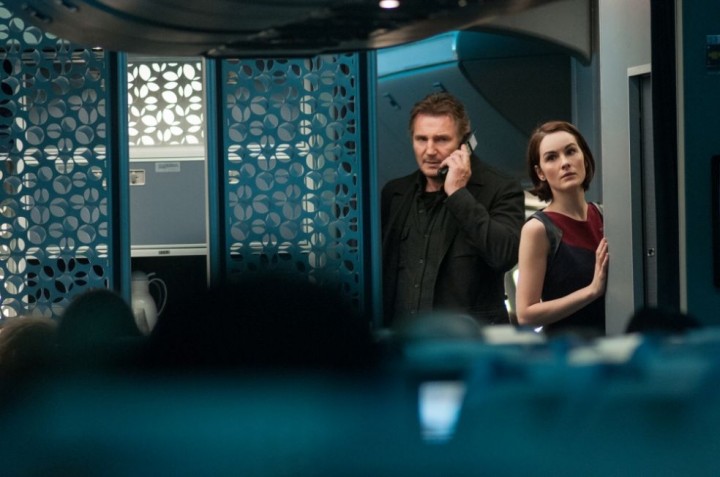 “Simon days…. put your hands on your head!”

Anyone scanning the production credits will probably not recognize director Jaume Collet-Serra’s name, although he has worked on several high profile projects prior to this; he helmed Paris Hilton’s foray into Hollywood cinema with 2005’s House Of Wax remake, and tried his hand at a mystery thriller with Liam Neeson back in 2011 with Unknown, but to my mind Non-Stop is his most accomplished work yet. Where Unknown felt unbalanced and woefully undercooked, Non-Stop feels slick, taut and pointed in the right direction the entire time. Kudos to Collet-Serra for giving this film a fairly large swathe of Hitchock-esque dread, the ticking-clock device coming along late in the film which undercuts the tension to a fair degree (it’s a cliche, the bomb countdown, but an acceptable one, I guess) but the early going has a lot of stylish, Robert Zemeckis-ish camerawork. 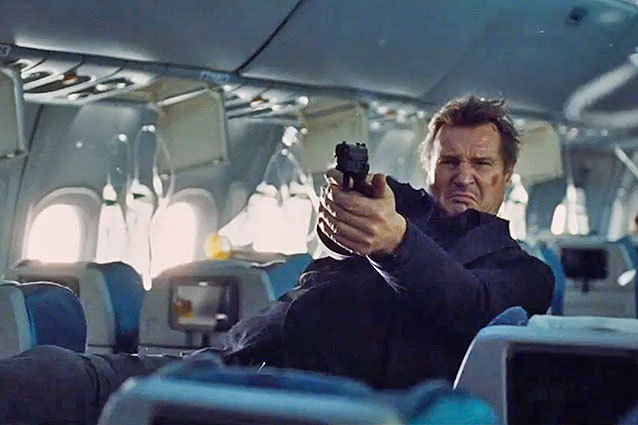 It might invalidate all known laws of physics, but by hell, it looks awesome!!!!

While the story does tend to get a little too wrapped up in its own silliness, and comes unstuck during a frantic third act twist, the overall achievement of Non-Stop can’t be understated. It’s a solid, well made little thriller that delivers some excellent action and mystery, albeit via the skewed vantage point of security in American post/9/11 air travel, and with Neeson’s dependable performance anchoring the whole thing, it’s a hidden gem that you really should take a look at. It’s no classic, but it is definitely worth a look.