Director :  Stuart Beattie
Year Of Release :   2014
Principal Cast :  Aaron Eckhart, Bill Nighy, Yvonne Strahovsky, Miranda Otto, Socratis Otto, Jai Courtney, Kevin Grevioux, Mahesh Jadu, Caitlin Stasey, Aden Young.
Approx Running Time : 92 Minutes
Synopsis: Frankenstein’s famous monster comes to life and battles demons and angels on Earth in the present day.
What we think : Not to be confused with Will Smith’s I Robot, this film is utter garbage. A C-grade action flick lacking nuance or subtlety, this rock-operatic fantasy clone punches legend into a cliche as it puts the famous monster – here played by an utterly un-monsterly Aaron Eckhart – into battle against the supernatural forces of Satan. On some level I guess there’s people who will find this entertaining purely on a sugar-rush level, but this reviewer is not among them. Trashy, pulp-inspired dreck at its worst.

If ever a film represented the very nature of its own conceit, I, Frankenstein is the defining example. Frankenstein’s Monster, the creature constructed by Victor Frankenstein in Mary Shelley’s classic horror novel, is a living corpse, a being created out of the parts of a number of dead people, and brought back to life using channeled lightning. Where Mary Shelley’s novel left off, however, I, Frankenstein kicks in, putting the monster (here given the rather Biblical name of Adam) into the present day to battle demons and angels on Earth. One part Gothic horror, one part Underworld rip-off, and all parts abysmal, I, Frankenstein is a cobbled-together mish-mash of ideas that never work, characters that never ring true, and a plot that makes less sense than even the stupidest Ed Wood movie. A bit like the monster itself, really. 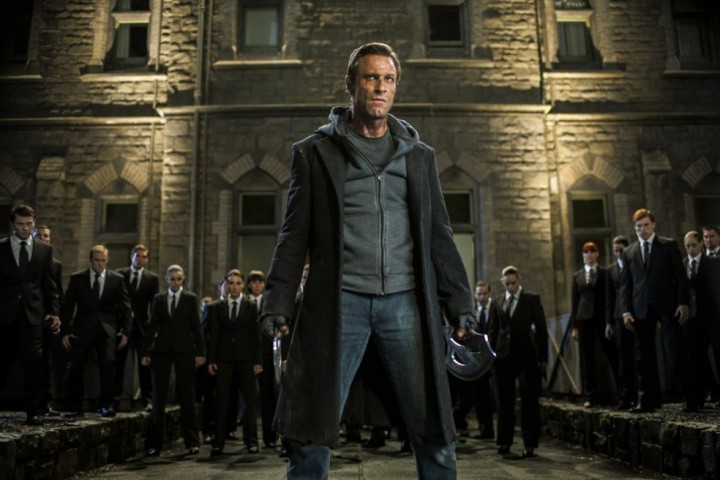 Okay, so you’re NOT all Agent Smith…. who are you all then?

Plot synopsis courtesy Wikipedia: In 1795, Dr. Victor Frankenstein (Aden Young) creates a monster (Aaron Eckhart), a soulless creature patched together from corpses, and then rejects it. In a fit of rage, the creature kills Victor’s wife Elizabeth (Virginie Le Brun) and Victor chases it to the Arctic to get revenge, but succumbs to the weather. The creature buries his creator and is then attacked by demons, before being rescued by gargoyles Ophir (Mahesh Jadu) and Keziah (Caitlin Stasey), who bring it before the gargoyle queen, Lenore (Miranda Otto), and their commander, Gideon (Jai Courtney). Lenore explains that they were created by the Archangel Michael to battle demons on Earth and protect humanity. They name the creature “Adam” and invite him to join them, but he declines and departs after being given weapons that allow him to “descend” demons (destroying their bodies and trapping their souls in Hell) as they have the symbol of the Gargoyle Order carved on them. Throughout the centuries, Adam fends off the demons that pursue him. During a modern-day confrontation at a nightclub, a human police officer is killed. While Adam is summoned by the gargoyles once more, the demon Helek (Steve Mouzakis) reports that Adam is alive to his leader, the demon-prince Naberius (Bill Nighy), who is disguised as billionaire businessman Charles Wessex, and his right-hand man, Dekar (Kevin Grevioux). Wessex has employed scientist Terra Wade (Yvonne Strahovski) to conduct experiments with reanimated corpses, and sends a group of demons led by his most formidable warrior, Zuriel (Socratis Otto), to attack the gargoyles’ cathedral and capture Adam so he can unlock the secret to giving life. 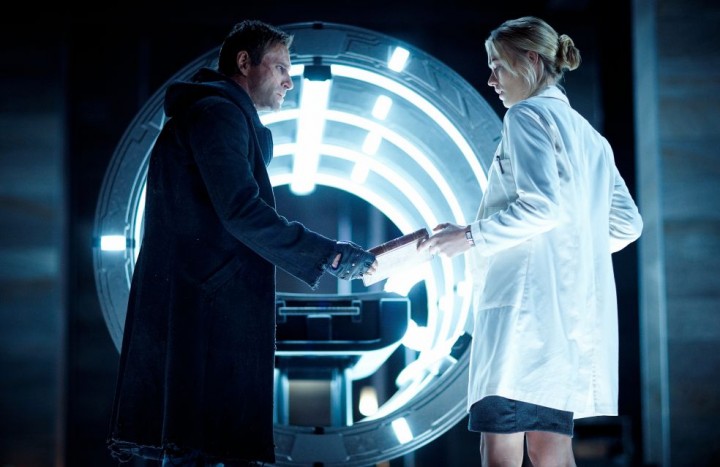 You have to keep the Grail Diary hidden, lest it fall into the hands of the Nazis.

Oh, how I lament the ruination of the Australian film industry. Yes, it’s ruined I say, because the more Hollywood cash that flows into our studio system the worse the films tend to be. I guess it’s a factor that this film’s Australian release came some 2 months after its debuted in the US – by then, the internet had all but killed off any possible chance of decent box-office this one ever had. Stuart Beattie’s I, Frankenstein, a film based on a comic book by US creator Kevin Grevioux (who also appears in this film as a henchman to Bill Nighy’s Naberius) represents the kind of technical artistry Australian filmmakers can achieve, yet the utter lack of enjoyment in watching this film is drawn mainly from the fact that the story, the characters, and the very concept itself, is badly executed. Whereas Frankenstein’s Monster is classically a creature of torment, sadness and ultimately rage, in this story they decide to give him an ass-kicking attitude and throw him up against a seemingly never-ending horde of Hell’s demons, all intent on killing him as part of an ongoing supernatural war. They’ve turned the Monster of Shelley’s imagination into a heroic figure, albeit a rather anti-heroic one, but a character we’re expected to cheer for when he goes to town on the next wave of demon-spawn. 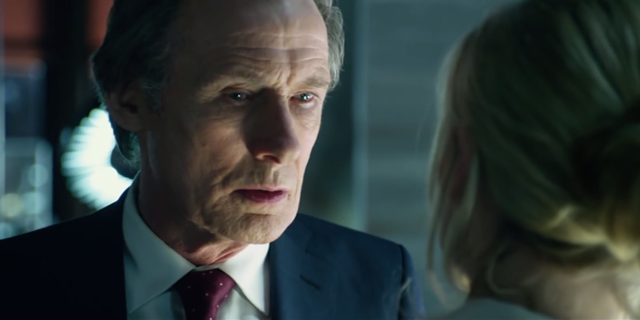 A little bit of heavy breathing never hurt anyone….

The film’s supernatural backdrop seems to lack genuineness; it’s like they’ve taken the superfluous flashiness of Underworld, with all it’s vamps-versus-werewolf street smarts, and transposed a similar aesthetic around Frankenstein’s legendary creature. A dose of Dracula’s Van Helsing (the Hugh Jackman variant, not one of quality) also seeps into Aaron Eckhart’s performance of the monster, as he growls, lumbers, punches and brawls his way through this empty, soulless film. For a character with no soul to appear in a film with no soul, must surely rank as one of the great ironies in cinema. Throw in some weird Gargoyle angel creatures, led by Miranda Otto’s flip-flopping Lenore, and you have a film that just crumbles under its own creative weight, trying to balance the fact that a creature with no magical ability other than immortality and enhanced strength is now battling creatures borne of the pits of hell. For whatever reason, I Frankenstein drops the ball here; this is Van Helsing level crud, the kind of CG-heavy nonsense that ruins otherwise good film concepts under an avalanche of ill-advised “that’ll look cool” moments. 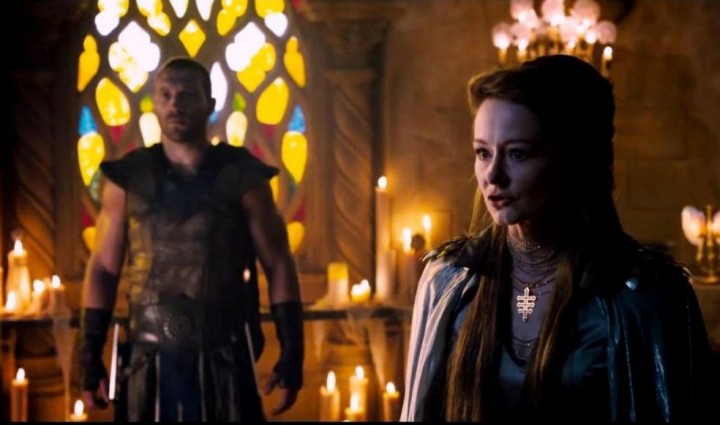 Stuart Beattie’s direction is commendable, really, what with the extravagance of visual effects and obvious green-screen work he had to accomplish here. If nothing else, the look of the film is certainly interesting, albeit often too dark and depressing and lacking any kind of humor whatsoever. The headache inducing action sequences are gargantuan in scope, but lack impact due to their overabundance, resulting in viewer fatigue as Adam launches into the fray (yet again) and descends countless faceless demons almost at will. There’s no real sense of urgency or threat, no heroic last-gasp save here, no real hook to give the audience a sense that Adam might not actually make it through the film (something which would have gone a long way to mitigating the stupidity this movie is saturated with). This leaves every action and effect moment feeling more like an extended show-reel for a film we should be seeing, which is a shame considering that the hundreds of folks who no doubt worked on computers behind the scenes here deserve a better film to showcase their stuff. 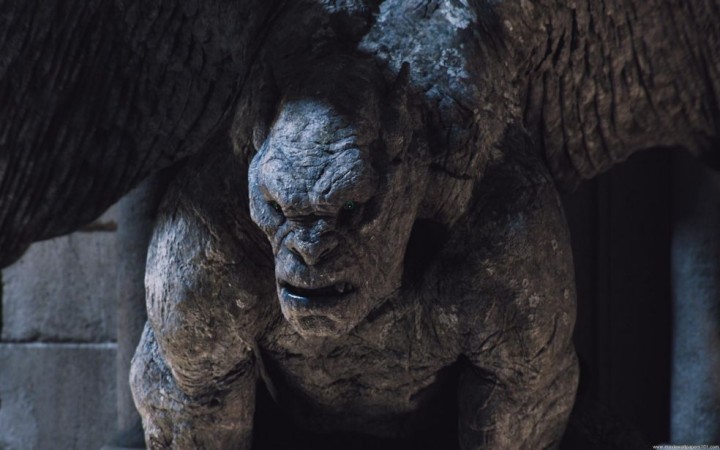 Hard as it is to believe, this is actually one of the GOOD guys!

The cast are absurdly camp; Aaron Eckhart’s grumbling, snarling Adam lacks any real presence or gravitas, and spends more time reacting to things in the film instead of actively pursuing things (although perhaps I nodded off through the bits where he did!), and although Eckhart looks the goods as the creature, he’s hardly the most imposing actor getting about. Miranda Otto makes a good Angry Angel, as Lenore, Bill Nighy has a great time as Wessex/Naberius (although it’s obvious to anyone who looks hard that they’re one and the same) while Chuck and Dexter star Yvonne Strahovsky does her best as the seriously underwritten Terra Wade (really, that’s a name?). Jai Courtney (who helped ruin the Die Hard franchise with Bruce Willis) looks like he’s in the wrong film, and a smattering of local Aussie talent appear throughout – most notably, Tomorrow When The War Began star Caitlin Stasey and resident uber-actor Bruce “I’m in everything” Spence (The Matrix Revolutions, Mad Max) – help round things out. The cast are hamstrung by poor writing (Beattie wrote the screenplay while co-writing the screen story) but they all appear to be enjoying themselves I guess, which is probably a good thing considering how shit the film has turned out. 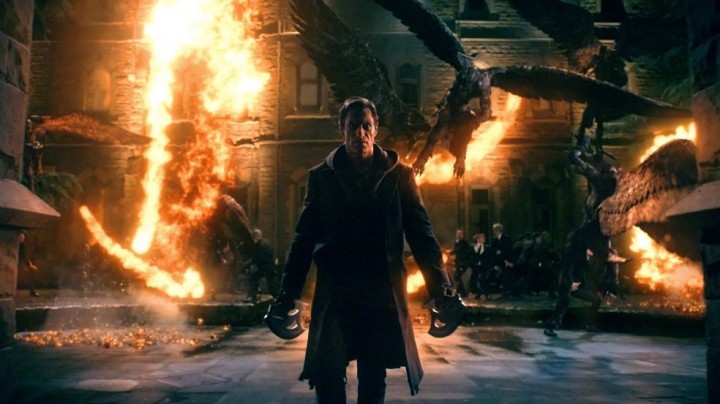 Raising your expectations just a little too much.

On some level I guess there’s a certain B-movie fun to be had here – I, Frankenstein is undemanding rubbish that is as forgettable as it is emotionally empty, so I guess if you set your expectations at absolute zero then you might (might, I reiterate) have some minor fun here, but even so, Stuart Beattie’s movie comes off as a meager, confusing headache waiting to happen. Take from that what you will – this movie is most definitely not recommended.