Movie Review – Art Of The Steal, The

Director :  Jonathan Sobol
Year Of Release :   2013
Principal Cast :  Kurt Russell, Matt Dillon, Jay Baruchel, Terence Stamp, Chris Diamantopolous, Katheryn Winnick, Devon Bostick, Jason Jones, Kenneth Welsh, Eugene Lipinski.
Approx Running Time :  90 Minutes
Synopsis:   A “getting the band back together” heist film sees some valuable paintings the focus of a multi-million dollar plan to cross borders from Canada into America.
What we think :   Piffling heist flick delivers some nice laughs, a twisty plot and Kurt Russell’s grizzled face in equally enjoyable amounts, yet never really seems to get out of second gear. For a film with a cast like this, I expected a lot better, and a lot more from the story, but for a generic B-movie heist film it delivers all you could ask.

Stealing nothing but your valuable time.

To think: Kurt Russell has yet to say “yes” to Sly Stallone and appear in an Expendables movie, yet he’s quite willing to waste four or five months making a mid-level crime flick like this. That’s not to say The Art of The Steal is a bad film, because I really enjoyed it, but it should not be the film to take precedence over a career booster like an Expendables movie. Russell, together with Hollywood B-listers like Matt Dillon, Jay Baruchel and Terence Stamp, all of whom have built respectable careers in their respective genres and projects, seem to be having a whale of a time here with this Ocean’s 11 knock-off, a kinda unsubtle comedy-lite crime flick that has very little actual “action” and a whole lot of planning, execution of said planning, and plot twists you can almost see coming. Good heist films need to have elements of surprise, in order to throw the audience off the track of what’s really going on, and The Art Of The Steal certainly tries to achieve this, but more often than not, it all feels like it’s trying too hard to surprise us – the film all but tells us there’s a twist coming – and it makes the entertainment value of such a venture just that little bit less enthralling. 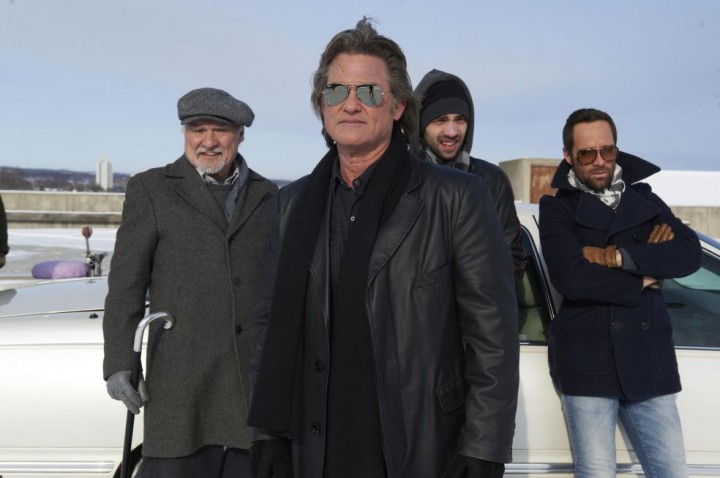 Getting the band back together.

Career criminal Crunch Calhoun (Kurt Russell) has just been released from 7 years in a Polish prison – betrayed by his half-brother Nicky (Matt Dillon) after a previous job went wrong, Crunch now works as a motorbike daredevil in traveling carnivals, earning very little. He is in a relationship with Lola (Katheryn Winnick), a woman of indeterminable moral fortitude, and friends with a kid who Crunch caught stealing from him, Francie (Jay Baruchel). On his release, Crunch is dragged back into Nicky’s world thanks to Nicky needing to do “one last job” to pay off a debt; together with their old gang, Nicky and Crunch will steal a priceless book from a customs office on the American/Canadian border. The book, supposedly the second ever printed, is an incredibly rare copy of the apocryphal Gospel of James (one of Christ’s disciples), dating from around the 1st Century AD. Crunch teams up with former allies, French forger Guy (Chris Diamantopolous), and “Uncle” Paddy McCarthy (Kenneth Welsh) to pull off the daring heist, one which has the potential to make the team millions of dollars. Pursuing them are Interpol agent Bick (Jason Jones) and a reformed art thief (and one-time friend of Crunch’s) Samuel Winter (Terence Stamp), who try and stay one step ahead of the scheming crew. 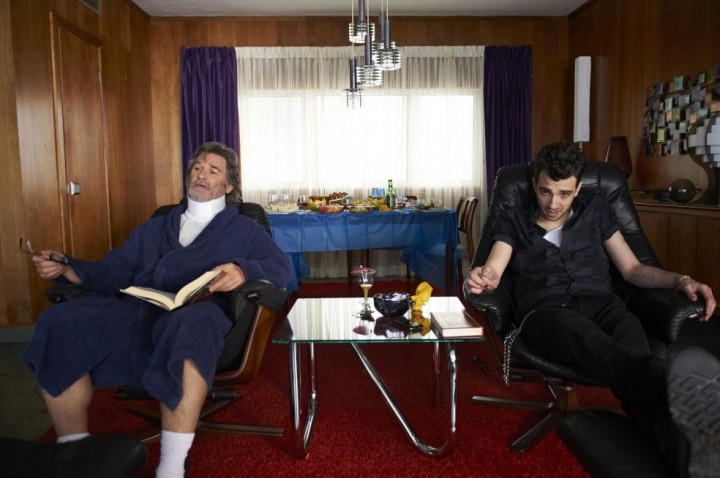 I don’t know about you, Jay, but I keep expecting Seth Rogen to show up and start shouting any time now.

The Art of The Steal suffers greatly from the sum of its disparate parts. With a plot that feels too clever for its own good, and a cast all gamely enjoying the labyrinthine twists and turns the story takes – not to mention the double-crossing and backstabbing which occurs as part of a genre flick such as this – there’s plenty to enjoy about the film’s inherent charm, but inevitably, perhaps due to Jonathan Sobol’s meandering direction, the movie never kicks into high gear. Potential – this film had plenty. After all, you don’t snag Kurt Russell with a waste-of-time script that offers him the part of a grizzled, rampaging old-timey art thief. It’s what the film does to bring that script, and these characters, to life that feels like a missed opportunity. Jonathan Sobol wrote the screenplay, so this must surely have been a passion project for him: it shows, because the film feels like it’s well loved from behind the camera, and yet all that love and endearment cannot muster anything other than a mild, indistinguishably half-hearted shrug from the result it gave me. 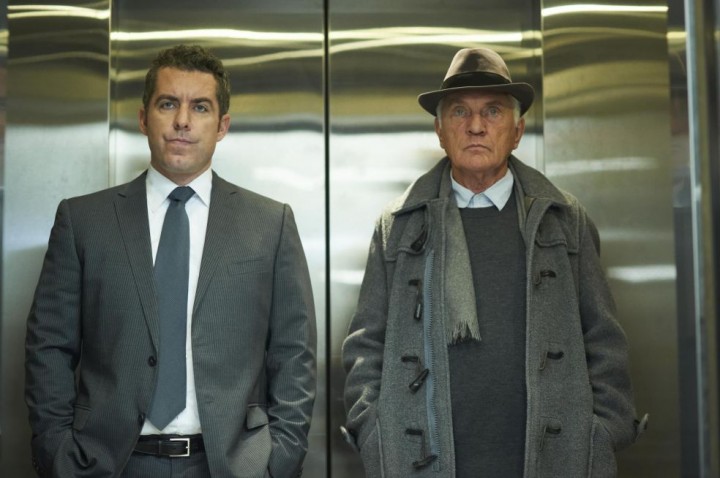 Nobody fart in an elevator.

The plot is a cobblers dog of MacGuffin’s and red herrings. Every heist flick cliche is thrown into the mix here – even the Scarlet Woman trope – and while you’re watching it you can almost feel Steven Soderberg’s lawyers towering over proceedings just waiting to sniff some Ocean’s 11 riffing, it’s so generic. The seen-of-all-before feeling this film engenders, with tips-of-the-hat to Guy Ritchie’s Snatch as well, limits the enjoyment one might get from watching it, because instead of investing in this film on its own terms, you tend to be comparing it to other – better – film of its ilk. And that, friends, is The Art Of The Steal’s kiss of death. Sobol’s script is jaunty, and indeed draws out some decent chuckles (a scene involving Jay Baruchel looking like an Amish henchman is particularly amusing, although the vagina-like art piece which becomes the focus of the film’s third act shenanigans smacks a little much of “trying hard to make you laugh”. There’s no wasted time here, really, because Sobol is careful enough to ensure that each scene carries its own weight within the story, always propelling the narrative along, and for that I guess we can be thankful, for it’s not a boring film as a result. But it isn’t really all that fresh. 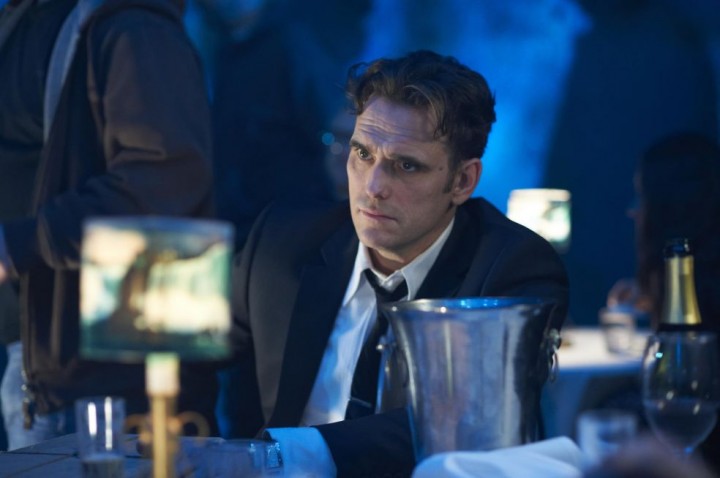 All puffed up and nowhere to drink!!

As mentioned, the cast all appear to be having a terrific time with this story. Ensemble films work best when you can see the cast having a great time, and that’s what you get here. Kurt Russell chews his scenes with his typically square-jawed old-boy demeanor, while Terence Stamp almost steals the film outright as the sarcastic, sardonic Winter (his interplay with the hapless Agent Bick – a terrific Jason Jones – is hilarious, and could almost be a film in and of itself!); Matt Dillon, Jay Baruchel and Kenneth Welsh roar into their respective roles as charming, innocent criminals and add considerable comedic weight to this movie. Katheryn Winnick is woefully underused as Crunch’s could-she-be-cheating girlfriend Lola, and Chris Diamantopolous has a ball as the snappy French forger Guy, but it’s with Stamp and Russell that the film really shines.

The Art Of The Steal comes across as a fairly slick carbon copy of a dumbed-down Ocean’s 11, until it starts to flounder through its throbbing middle act. While Sobol keeps the action going, and the plot turning itself inside out to drive any audience into a fit of faux-confusion, there’s a sense that this movie never quite kicks things into gear like it should (or so obviously wanted to), and although random weird stuff is amusing in moments, there’s not enough strength within the central plot to support it the entire time. The Art Of The Steal is a a meandering muddle of slick plotting and funny (if generic) characters, and will superficially entertain on a rainy afternoon, but it’s a pale imitation of far better films of its kind down the years, and should only be sought out by completists for the work of Kurt Russell or Terence Stamp.