Director :  Bernard Rose
Year Of Release :   2013
Principal Cast :  David Garrett, Jared Harris, Joely Richardson, Christian McKay, Veronica Ferres, Helmut Berger, Olivia d’Abo, Andrea Deck.
Approx Running Time :  125 Minutes
Synopsis:  World renowned Italian violinist, Niccolo Paganini, arrives in London to perform, where he meets the local promoter’s daughter.
What we think :   Sumptuously mounted, yet weirdly anemic fantasy-biopic about possibly the most famous (and controversial) violinist who ever lived, Bernard Rose’s film offers much but delivers little. It’s hard to say where it all goes wrong – the performances are all excellent (with the exception of lead actor – and real-life violin virtuoso Garrett) and Rose once again delivers a film that is undeniably beautiful; yet as a story, this fictional variation on a Paganini theme just doesn’t quite click. Fans of Bernard Rose and the work of Paganini should give it a shot, but I think everyone else should probably skip it.

This ain’t no Beethoven.

My first experience with the films of Bernard Rose came with his fascinating (if utterly fanciful) depiction of the life of Ludwig Beethoven in the dramatic romance film Immortal Beloved. As someone who appreciates a good arpeggio and a cracking concerto, Immortal Beloved quickly became one of my favorite guilty pleasure films – not the least thanks to a ripping performance by Gary Oldman as the maestro himself. The Devil’s Violinist, Rose’s second film to focus on a figure from the Classical Music genre, had a fair amount of inbuilt interest for me, with a starring role for real-life pop-culture violin artist sensation David Garrett (those unfamiliar should check the Tubes Of You for more!) and Rose’s previous cinematic appreciative success; for all the lack of promotion or even knowledge this film existed (I stumbled upon it completely by accident!), I dearly hoped the quality behind the camera and in front would deliver a film worthy of the legendary Paganini’s name across the top. 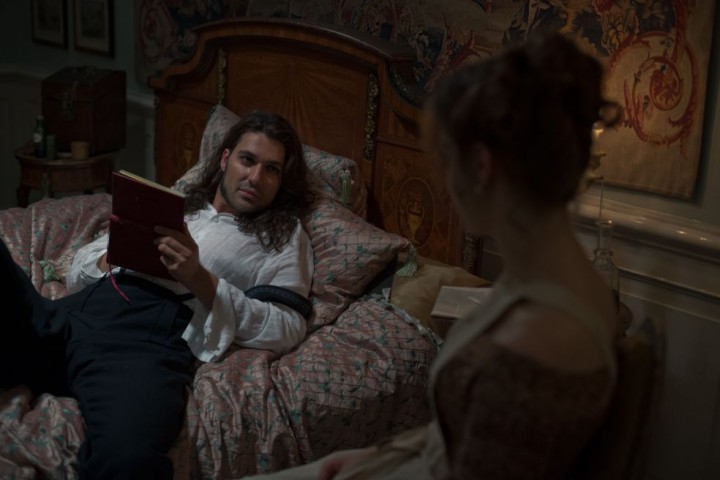 Would you mind if I stuck my quill in your ink pot?

Virtuoso Niccolo Paganini (David Garrett) lives a hand-to-mouth existence in Italy, his home country, playing to crowds of unappreciative bourgeois residents. Filled with his own ego, Paganini is a rabid womanizer, gambler and drunk, spending his time between concerts engaging in all manner of illicit and ill-advised pursuits. One day, Paganini is propositioned by the devilishly conniving Urbani (Jared Harris) who convinces him to sign a pact to provide the maestro with wealth and success beyond his wildest dreams – it’s a deal with the devil too good for Paganini to resist. Courted by a London promoter, John Watson (Christian McKay), who nearly bankrupts himself trying to get the musician to come to England, Paganini arrives to a less-than enthusiastic reception. He’s pilloried by the local feminist religious zealot order, led by Primrose Blackstone (Olivia d’Abo), , written off as a hack by the local press, including reporter Ethel Langham (Joely Richardson, doing her best Fagin impression!), and dismissed by the British musical establishment as an undesirable inhabitant on their shores. Paganini slowly begins to warm to his London surrounds, and falls for the charms of Watson’s daughter, Charlotte (Andrea Deck); Urbani’s plans for Paganini’s success begin to waver with the maestro’s infatuation towards Charlotte, something he cannot – will not – allow to happen without a fight. 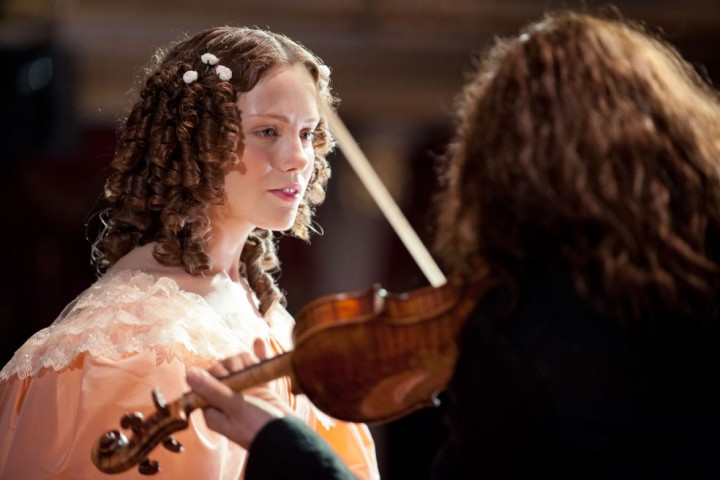 Am I not pretty enough?

The Devil’s Violinist seems to be treading in the larger footprints of Bernard Rose’s previous musical success, Immortal Beloved. There’s no escaping the thematic and melodic similarities between the two, although it must be said that this film is easily the more fanciful. At least Immortal Beloved kept itself rooted in some semblance of believability and reality, for The Devil’s Violinist eschews even remote plausibility in the pursuit of grandiose brushstrokes and somewhat clunky characterizations of the major players. The Devil’s Violinist is a film that strains credulity, so I guess if you’re after a film that takes one of music’s greatest performers and riffs on it through a lens of modern historical revisionism, you’ll enjoy this one a lot. Probably tipped into the same mold as the late Ken Russell’s The Music Lovers (which tore Tchaikovsky a new audience through audacious fictionalizing of his life!), The Devil’s Violinist works on a more mundane, period-film style in which all the prerequisite boxes are ticked, all the heaving bosoms are displayed, and once more the tragedy of genius for such a take-no-prisoners era of society is revealed in all its heartbreaking glory. It’s pertinent to note that Russell is given a salutation during the end credits, perhaps a nice nod by Rose that he’s taken the Lovers template and run with it.

Oh man, they spared no expense on this green-screen!!!

There’s no denying Bernard Rose’s skill in delivering a film of pristine beauty (including the mucky muck!), inasmuch as he knows how to get into the characters he’s showing us with all their faults and foibles, yet The Devil’s Violinist seems to lack that which it so desperately craves: passion. With Paganini’s lustful behavior early, followed by the film’s resolute personification of Paganini as a man “possessed by the devil” for his ability with a violin, one would expect a film with such lofty ambition to deliver something more effective than what eventually transpires. Rose’s script makes Paganini out to be an utter ass most of the time, a belligerent, selfish, slovenly reprobate with the social airs of a man three classes above. He also makes him an opaque, indefensibly inaccessible character who struts through his own film with little to grace him but good looks and some fancy fingerwork. Paganini was famous for being able to make women swoon (or scream) with his playing, something the film hits on a few times with great semi-comic effect, yet it seems to come from a place of “greatest hits” production – there’s no soul to Paganini as a person, rather Rose seems intent on giving us a man so utterly unlikeable as to be nearly impenetrable as a human being.

You mention that dickhead Rossini once more I’ll kick you across the courtyard!

Even taking that into account, there’s no denying that the musical craftsmanship on display here is nothing short of astonishing. Although the ability to witness Paganini himself perform is lost to time, David Garrett’s magnificent violin performances hold a lot of this film’s technical prowess in good stead. The music is stunning (those of you who appreciate good classic music would have to agree) and Bernard Rose delights in the euphoria of these era-specific rock-stars’ magnetism and sheer human artistry, yet the main story – the narrative on which the drama and conflict hang – is never able to support this glorious musical accompaniment. Which is a shame, because Paganini deserved better – if I was to dabble in some retrospective editorializing for a moment, I’d suggest that had Rose kept to the historical Paganini and our understanding of him, rather than this unsolved cinematic jigsaw, the natural drama of the man’s life would have been a more sincere essay than the one presented. 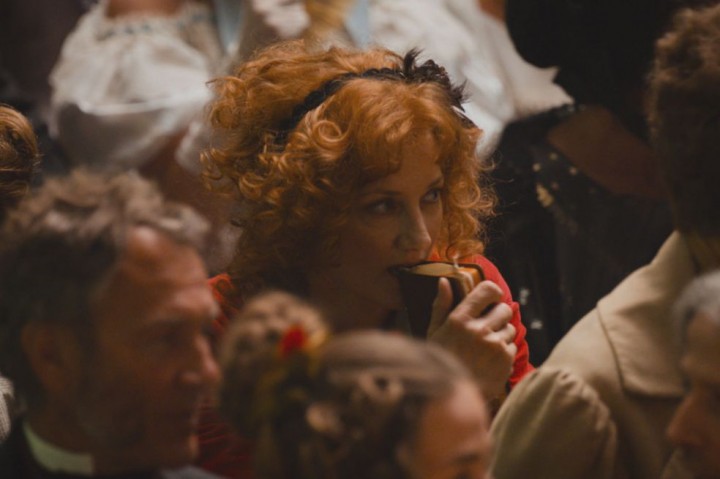 Oh, the tension got to everyone!!!

The cast, from Jared Harris as the devilish Urbani, Joely Richardson as the sneaky Times reporter Ethel Langham, and Christian McKay as the hapless, desperate John Watson, are all excellent; I must admit that Harris overplays Urbani a little too much, in my opinion, coming off as a little too obviously Faustian (hamming it for the camera, perhaps) than the film required, and Joely Richardson seems to be playing a female Fagin in all her Cockney glory, but on the whole everyone here seems to be having a terrific time. The debut performance by Andrea Deck, as Paganini’s central love interest Charlotte, is luminous, and I hope to see more of her in future endeavors. It is David Garrett, however, who is magnificent when playing the violin; he falls to hell when trying to “act” all dramatic – Garret has the looks and hidden darkness, but cannot muster more than simplistic wooden performance when asked to do anything else. Garrett’s no actor, even though he can obviously play a damned instrument. 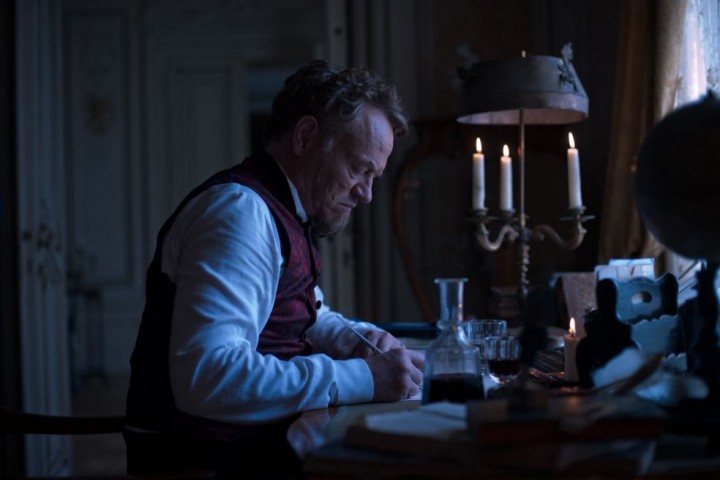 Just writing down all this things wrong with my performance in this film!!!

This unfortunate problem for the film is crucial to its failure. Garrett’s limited performance ability relegates the potency of this film to mere curiosity value only. There’s not much here worth noting other than a terrific soundtrack and some equally magnificent period detail (largely filmed though many European cities), and a solid performing performance from Garrett: otherwise, The Devil’s Violinist comes off as more a midday movie with a large budget than a fully fleshed out feature film. Sure, it looks nice, but doesn’t tap into the furor and passion with which Paganini lived his life. For the curious, it’s definitely worth a look, but for the casual viewer I think there’s better films out there to take up your time.