Movie Review – Legend Of Hercules, The

Director :  Renny Harlin
Year Of Release :  2014
Principal Cast :  Kellan Lutz, Gaia Weiss, Scott Adkins, Roxanne McKee, Liam Garrigan, Liam McIntyre, Rade Serbedzija, Jonathon Schaech, Luke Newberry.
Approx Running Time :  99 Minutes
Synopsis:  The son of Greek God Zeus, Hercules, returns from gladiator rings in Egypt to seek revenge on his fake father who killed his mother.
What we think :  An abominable mess, The Legend Of Hercules mixes Zack Snyder’s 300, a sprinkle of biblical allegory, and a whole slew of Russell Crowe’s Gladiator, ending up with a headache inducing creative vacuum. A film with almost no redeeming qualities other than wasting a potentially below-average cast, one must surely wonder if this film represents the lowest ebb of director Renny Harlin’s career. Mindless, impossibly obtuse, horrendously scripted and acted with the subtlety of scrotal warts, this Legend is anything but legendary, and will hopefully consign Kellan Lutz’s movie star status to the scrapheap. Atrocious in almost every way.

Stick a fork in it, this one’s a turkey.

I’m calling it now, guys. Renny Harlin, the once great action director of 90’s classics such as Die Hard 2, Cliffhanger, and The Long Kiss Goodnight, is no more. Regardless of budget, regardless of cast, regardless of story, the man has simply lost the ability to direct a film with any kind of quality whatsoever. As such, I hereby declare that no longer is Harlin’s name on a film poster a sign of any kind of reassuring quality – “from the guy who directed Cliffhanger” should now read “from the guy who directed crap like Driven, The Covenant and 12 Rounds“, because that’s the kind of shitty film you’ll get from him in future. It’s probably been that way for the better part of a decade – at least since Deep Blue Sea, Harlin’s last passably entertaining film, and even that’s a stretch – but I’ve continued to hold out hope that someday, Harlin will snag a decent budget film and make another corker of an action classic. Sigh. Guess not. The Legend Of Hercules, the latest venture from this once great director, is a horror story of poor direction, bloodless PG13-violence that is impact free, and dire, borderline-juvenile scripting that rankles the ears and eyes wherever it turns. A Hercules film that’s utter garbage? How can this be so, especially in this modern age of quality crap like the Conan remake, where film-makers have an abundance of folks willing to throw big money at the screen in dreams of striking it rich with a monster hit? 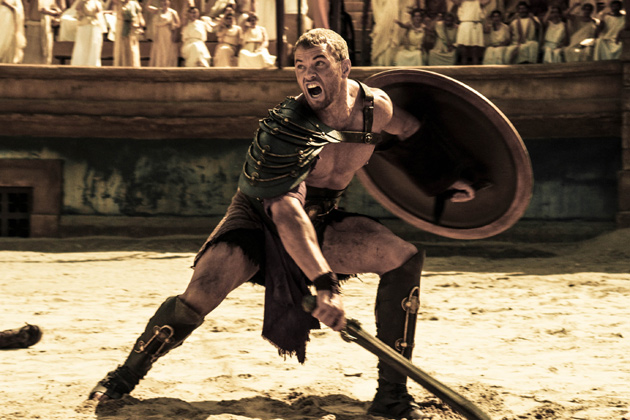 I told you what would happen if you didn’t clean your room….

In 1200BC, Greek King Amphitryon (Scott Adkins) claims a vast kingdom in his name, after violently deposing the previous ruler. The King’s wife, Alcmene (Roxanne McKee), who is estranged from her husband due to his violent ways, seeks assistance from the Gods, pleading to Zeus for help. Zeus grants her request, impregnating her with his seed to bring about a child which will stand up to Amphitryon’s cruel ways. 20 years later, a young Alcides (Kellan Lutz) lives in the shadow of his brother, Iphicles (Liam Garrigan), and has fallen for Iphicle’s intended bride, Hebe (Gaia Weiss), who reciprocates those feelings, much to Amphitryon’s dismay. Banished to certain death by Amphitryon, Alcides (who is really Hercules, the name given to him by Zeus but rebuffed by Amphitryon) is sent away from Greece to Egypt, where he ends up as a gladiator for sport, owned by a rich and powerful promoter. Tgether with another soldier, Hercules returns to Greece as a gladiatorial champion, and takes the battle to his father and brother, slowly learning to harness his untapped potential (read: powers) and release the Greek people from Amphitryon’s despotic rule. 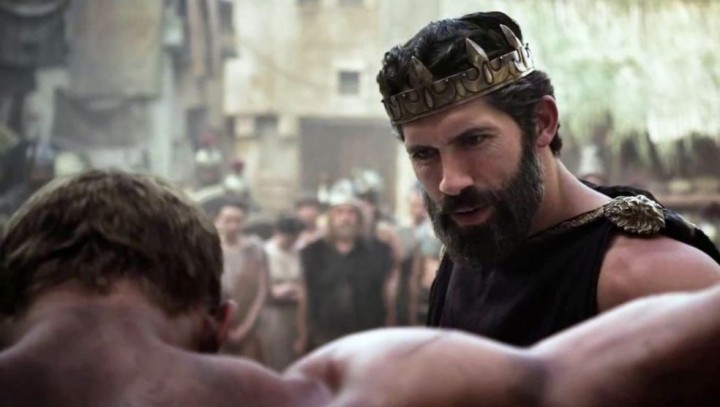 For a film with a $70 million budget, The Legend Of Hercules looks surprisingly cheap. The visual effects, a large portion of which appear to be second-rate green-screen and rather dicey CG, would hamper a film even half that budget, yet here, against the backdrop of ancient Greece and the mythical Hercules, it comes off looking like poor children’s television programming. The film strives to be some kind of mish-mash of 300’s gritty, slo-mo battle aesthetic and a half-assed Gladiator knock-off, threaded with some tenuously coddled subplot about “achieving one’s destiny”; as a story, the film is a train wreck, never achieving any narrative cohesion, instead depending on Harlin’s inept handling of several dreadfully staged action sequences for its momentum, of which it sadly lacks any. The film’s cast, led by an apparently constipated Kellan Lutz (he of Twilight “fame”) and featuring a blink-an-miss-it cameo from Jonathon Schaech, are given lines of dialogue so inane, so cliched, so clunky and derivative it amazes me that they could film any of it with a straight face.

The cast serve the script as admirably as one could considering the film feels like it was written as a high school production, with Scott Adkin’s King Amphitryon coming across as an evil King Leonidas from 300, Liam Garrigan approximating Dominic West as Theron from the same film, Rade Serbedzija as the role of Derek Jacobi’s Senator Gracchus from Gladiator, and Roxanne McKee as Connie Nielsen’s Lucilla – every character here feels like it’s been pinched from another movie…. hell, even Kellan Lutz comes off as a poor-man’s Russell Crowe, portraying Herc as a very Maximus Decimus Meridius type, brooding and hulking and muscular. There’s even some dude here doing his best Oliver Reed impression as an unscrupulous gladiatorial fight promoter – really, this film hits creative bankruptcy early, and never recovers. Lutz looks forever like he’s pinching out a shit, his facial expression leaping between “pained reluctance” and “angry scowl”, although telling the difference proved to be exceedingly difficult. The boy has no range whatsoever, and even his final rousing “we’ll die fighting and live forever in history” speech, a specialty of Hollywood screenwriters, is like making a silk purse from a sows ear. And it’s a sad day indeed when your leading man has larger tits than the leading lady. Poor Gaia Weiss has obviously debuted here with this role (can’t find anything about her on the internet), and no doubt will find herself thrown under the same bus that struck Godzilla’s Maria Pitillo (read my review on that!) in that her part here does her no favors whatsoever. At least she’s pretty to look at, I guess. 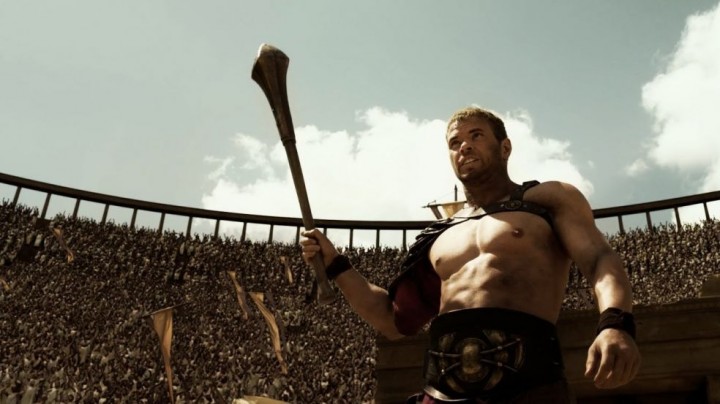 The story is a nonsense, which would be okay if the action or the mindless chest-thumping made up for it by being… you know, entertaining. Unfortunately, Harlin is so bogged down in replicating Zack Snyder’s 300 slo-motion effects, and trying to make the action so bloodless and ephemerally brutal, rather than actually gory which might have helped a lot, he can’t bring any energy to this film’s piss-poor narrative. It’s a half-baked, mumbo-jumbo of pseudo-religious allegory and (in one crucial scene) utterly biblical echo of Sampson throwing down the Temple, it’s a wonder the production wasn’t sued for plagiarism by a church somewhere. Watching Lutz do his best Muscular Jesus impression became horrifyingly uncomfortable after a while. The fact that he barely even does anything herculean throughout the film is also a damning statistic – Hercules punches hard, can throw his opponents across a room, and in an early opening scene wrestles a horrendously CG lion to death (yup!), but the climax of silliness is watching Lutz slay his enemies with a sword infused with the lightning of Zeus; it’s an Ancient Greek Lighsabre, and by God it’s stupid. Otherwise, he’s hardly a heroic figure, other than what “the people say” about him. Hercules never earns his stripes, never overcomes his failings; he simply reacts to events, rather than become involved proactively. 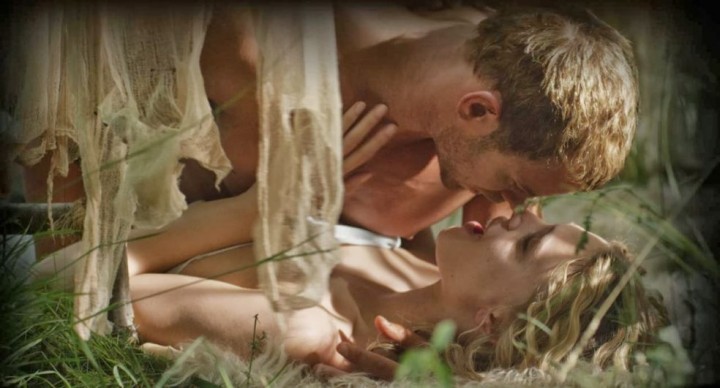 Getting his prostate checked….

The Legend Of Hercules cannot figure out what kind of film it wants to be. On the one hand, it strives for that grim-n-gritty fantasy tone that 300 did so well, a heightened action-epic visual aesthetic that brings a moody, shadowy, malevolent evocative atmosphere to proceedings. Troubling, however, is the films’ inherent refusal to actually commit to such an adult-oriented tone. The violence is watered down to that stupid point where people are hacked and slashed to death, yet no arterial blood flows across the screen whatsoever (which wouldn’t be a problem if the film’s visual aesthetic didn’t seem to indicate that it would!); we were spoiled by 300’s excessive gore, and anything less now just feels like a waste. If you’re going to go with a perceived violent film, you have to make the violence count, not reduce it to slick sound mixing and some sly editorial trickery. 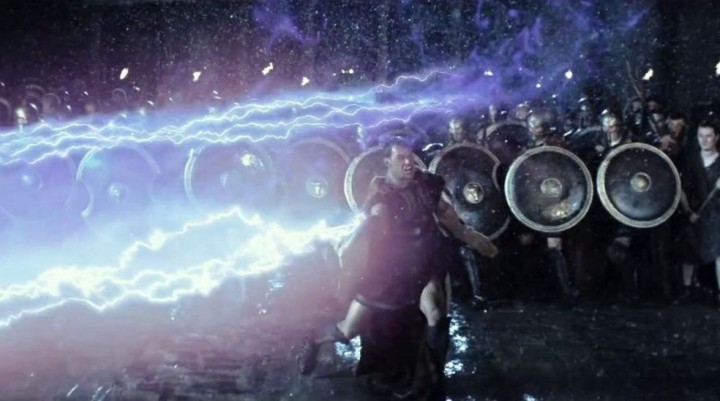 Zany effects almost saved this film from being an utter debacle. Wait…. what?

This Hercules feels like an adult action flick for children, a half-assed attempt to make the younger boys who are too young to watch 300 think this one is cool. It’s not. The Legend Of Hercules is an unmitigated disaster from Renny Harlin, a noisy-yet-tone-deaf, unbalanced, unfocused attempt to capitalize on the wave of high fantasy audiences seem willing to accept these days. The fact that I’ve mentioned other films by comparison to this one throughout this review should speak volumes as to the quality The Legend Of Hercules has going for it. More a Greek Tragedy than a heroic adventure.